The week beginning the 1st of December 2018.
Saturday the 1st

One of the reasons for choosing this weekend to travel to Auckland was that the Women's Studies Association, Pae Akoranga Wāhine Auckland committee had arranged an end-of-year event, with a speaker and afternoon tea.  A feminist gathering is my favourite sort of thing.

In the afternoon and into the evening “the family” got together, Rachel and Issa both coming to Jude's place, where we sat around their small back-yard pool in a very summery afternoon, before eating dinner together.  Jill no longer attends such events, since she doesn't know who half the people are.

Sometime on Sunday I took Stella and Louie to the St Luke's mall, which used to be my local shopping precinct when I lived just around the corner.  I said something outrageous to a young shop attendant when she offered me a plastic bag to carry our two small purchases, causing Louie to describe me afterwards as sounding like "a disappointed eco-person" and he was surprised when I was polite and friendly to the next shop attendant.  I'm finding that my immense internal amusement at my own clever quips is not translating well to the outside world.

I've discussed this problem with Stephan and he says that he can't always spot when I'm being funny either but that when he knows I am and someone else hasn't noticed, I'm hilarious.  I don't know what to do about this problem.  I really wouldn't feel comfortable adding a wink to my delivery because the whole point is its subtlety.  Perhaps it's fortunate I spend most of my life alone, not out in public, traumatising other people. 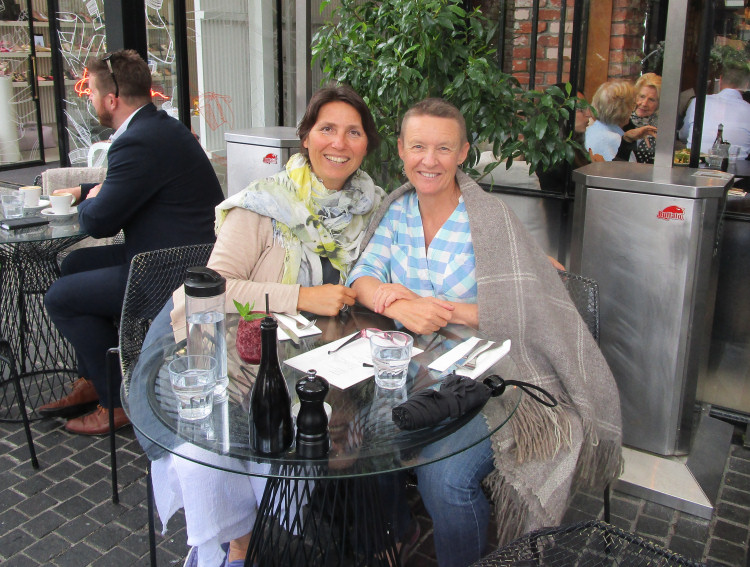 On Monday I texted Iphigenie and she quickly replied, telling me she's leaving the country tomorrow and while she'd meant to be in touch with and to visit us, had run out of time.  We arranged to meet for lunch in town, both travelling there by bus in the rain.

The blankets were on every chair and as the air had cooled a bit by the time I arrived and I wasn't carrying a jersey, I used one. 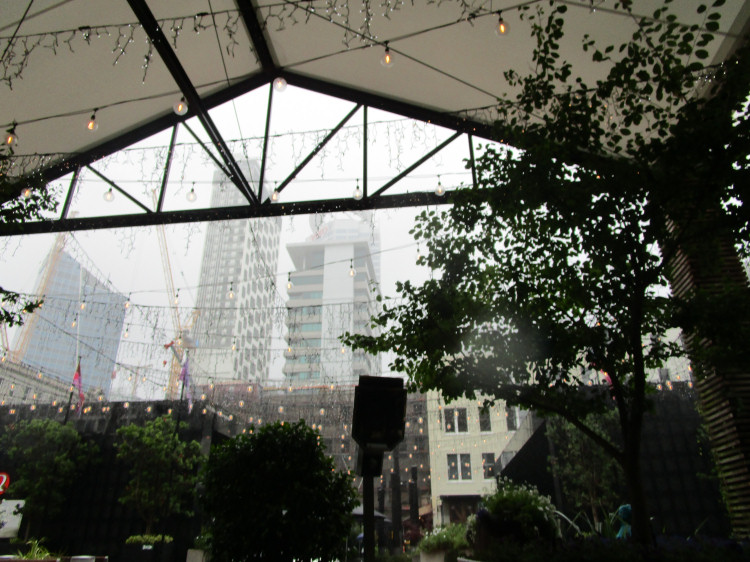 We were sitting outside but under an enormous canopy.  When a very heavy shower pelted down, a swirling mist of water droplets surrounded us.  It wasn't unpleasant, wrapped in my blanket.

After lunch I waited near the Ferry building for Jorja, who kept texting me that she was only two minutes away, which was obviously untrue, the third time she made that assertion!  We went up to Ponsonby to the Women's Bookshop and while I was catching up with Carole, its lovely owner, Jorja was purchasing a book token which she then presented to me, saying she never did buy me the book she promised so now I could buy whatever I liked while I was there.  Nice.  I'd already read Carole's first recommendation, so bought her second, the Man-Booker Prize winner, Milkman by Anna Burns.

Jorja took me down the road to Jude's house so I could collect my belongings, then back to the Britomart station in town, so I could catch a train on my way out to the airport.

I travelled down and back on the plane with a very pleasant young man who lives around in Takahue, whom we met at a party last year.  While tiny planes have their discomforts, the fun thing about travelling with only a few people is that it's easy to spot the people you recognise. 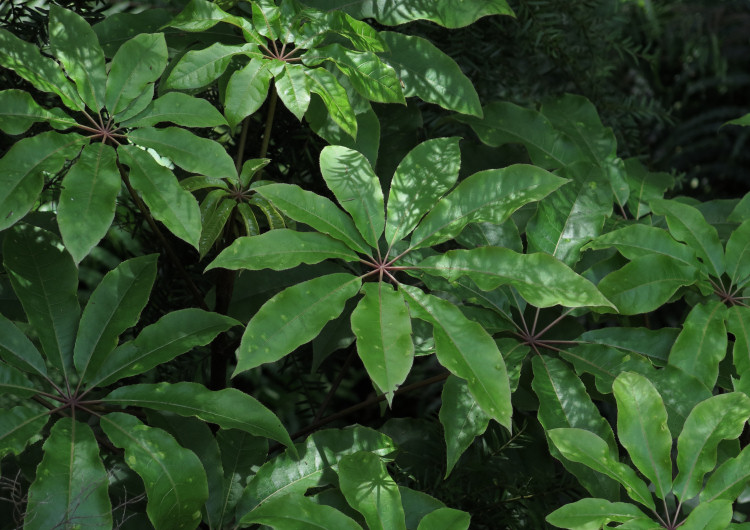 Early in the afternoon the sun was casting lovely shadows upon the Pate leaves in the fenced gully on the low side of the track, as we walked along Route 356 on our way to the Middle Back.

I heard my first big cicada of the season.  The smaller variety were singing near the house a few days ago but the large ones are always a bit later to emerge.  Summer has arrived already. 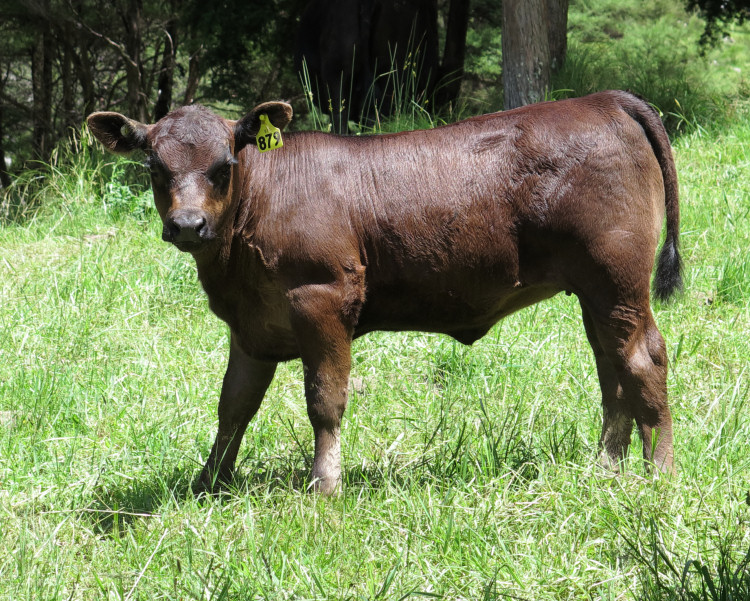 This gorgeous calf, 879, is unfortunately not a very calm nor friendly animal, or she'd already be on the heifers-to-keep list.  Maybe she'll settle down in time. 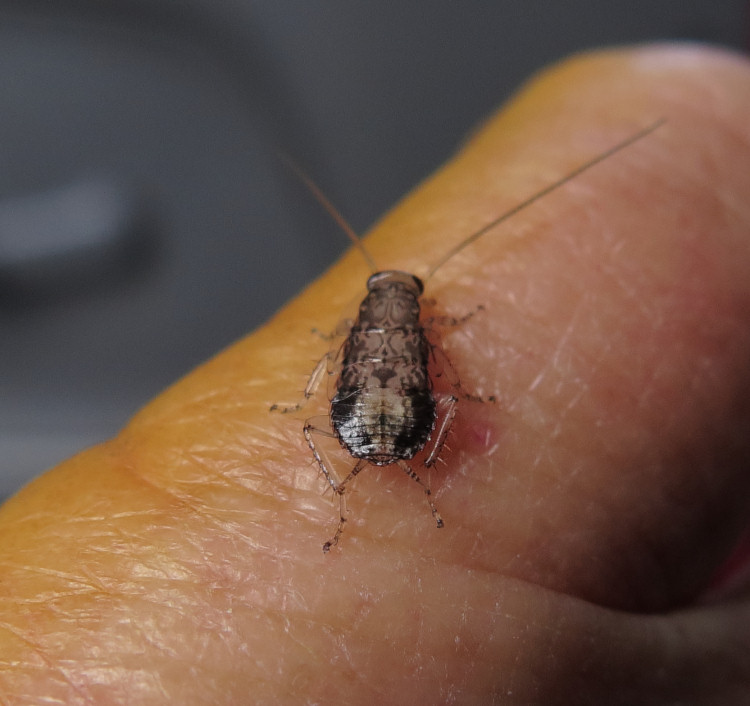 A tiny cockroach fell on me from somewhere in the trees. 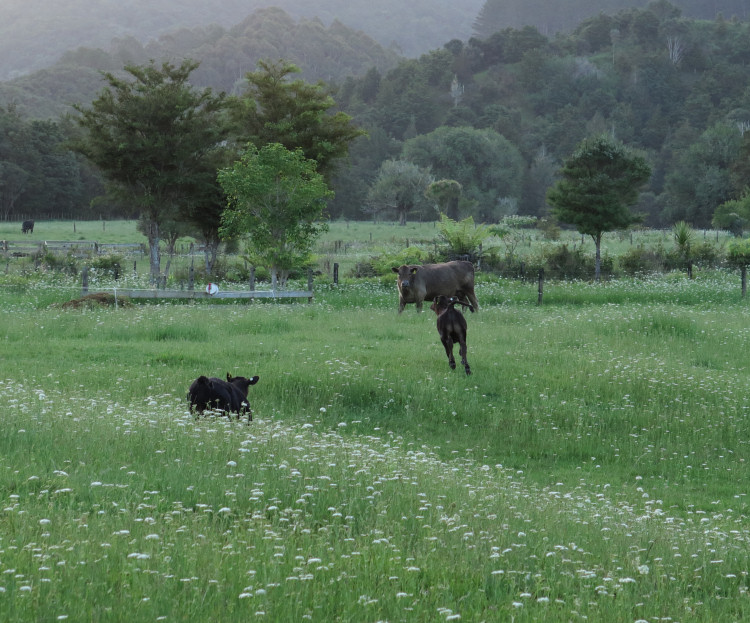 I watched Stephan trying to get the cows and calves in this evening.  Grey 807 isn't always helpful.  This evening as the calves decided not to go to the gate but to hare off up the paddock with their tails in the air, 807 joined them for a mad run around the paddock. 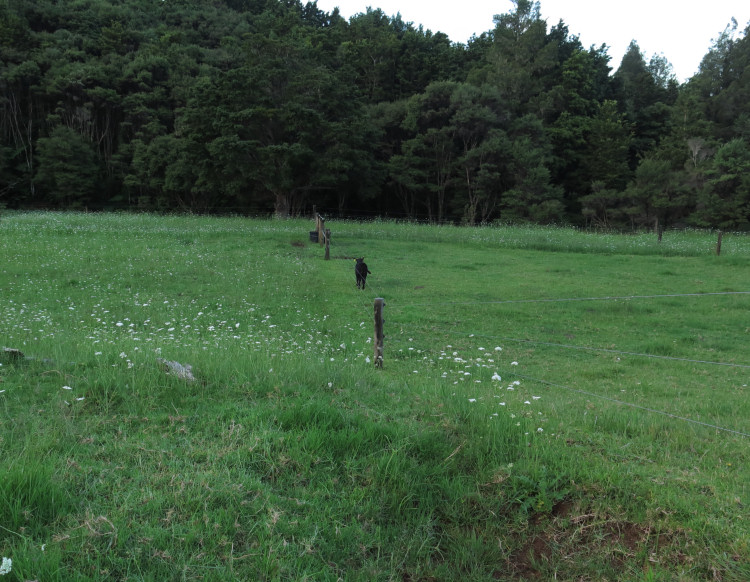 Watching Stephan I'd heard calling from across the flats; one of the calves had gone through the fence between Mushroom 3 and 2.  I walked her mother down the fenceline and the calf followed and ducked under the spring gate at the bottom of the slope.

The absence of white flowers in the pasture to the right, indicates that Parsley Dropwort can be controlled with cattle alone, if the timing and grazing pressure is right.  The pasture on the left proves it's impossible to manage that most of the time.

The power went off this morning at ten to seven and stayed off until half past eleven.  The electricity providers never provide explanations for these events, which makes them even more frustrating.  Some companies still have little sense of how to maintain customer support.  I guess they don't need to, since we have nowhere else to go.

Stephan spent some of the morning washing the house with a big brush on the end of a pole with a hose attached.  Elizabeth had washed her house last time we were there and lent us the brush.  A lot of spiders colonise the outside of our house and if we didn't occasionally evict them, eventually we'd be entirely encased in spider webs.  It was a lot lighter inside after he'd finished.

While Stephan was out doing tree things with Brian in the afternoon, I wandered over to check the young stock in the Road Flat paddock and discovered they probably ought to have been moved yesterday. 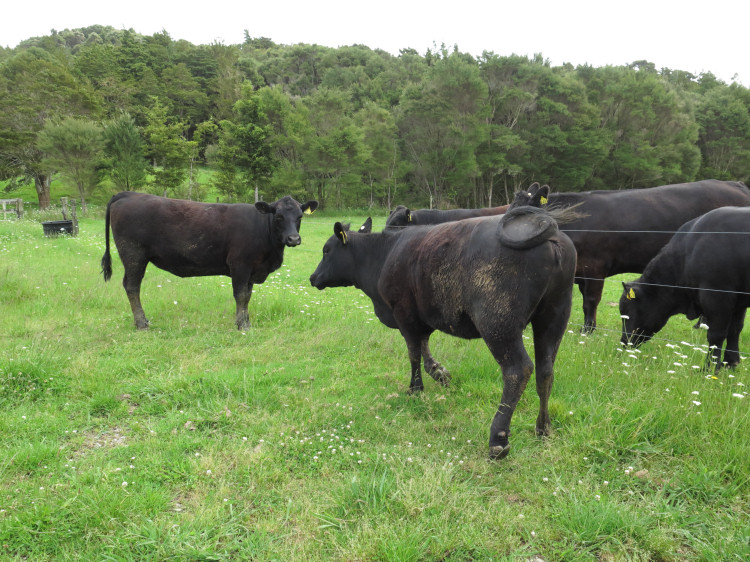 They went very willingly across the stream and up into Flat 4.  When I followed them I noticed I'd not shut the gate out into the lane and had a race with them to see who would notice it first: they did, although only two went out and since they were so interested in the bulls in 5b, they didn't go far.

With only three hot wires between them, I decided it would be prudent to move the bulls.  I don't think they'd try it but if someone got pushed he might end up on the heifers' side.  Of course they wouldn't leave this fenceline, even when I called them to follow to the gate across the paddock.  I fetched some standards and hot wire and managed to exclude them from this corner of the paddock and the shared fenceline.  Later when the heifers had drifted away across their paddock, I was able to move the bulls to the newly offered fresh grass. 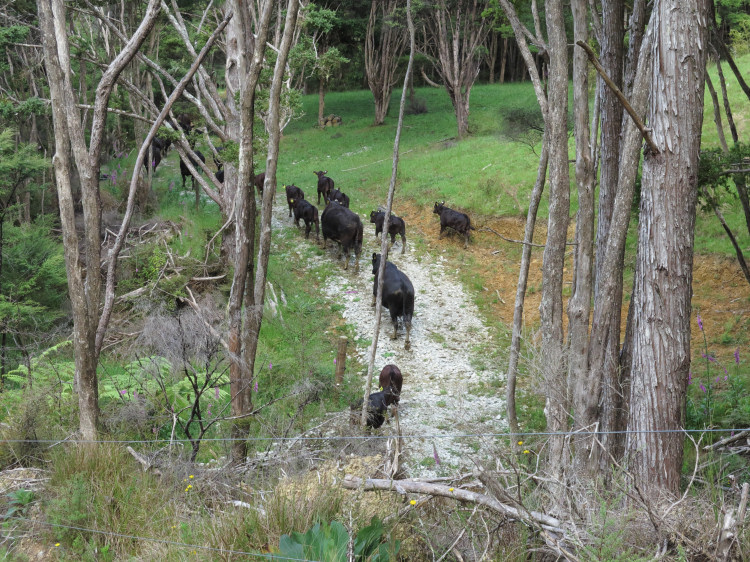 In the mean time I went out to the Middle Back and called the calves and cows through the gateway to the PW.

Here they were all following Route 356.  Cattle often move with some hurry to the end of a new area, surveying what's on offer, before turning to graze their way back across it. 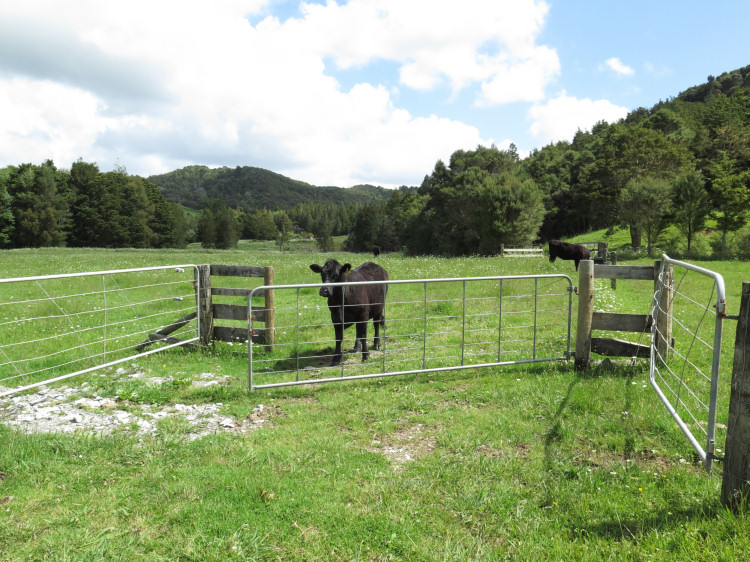 Stephan had gone out to help Brian again while I participated in a Teleconference call.  Toward the end of the meeting, I looked out the window to see cattle moving where there should not have been any: it was the young mob, coming down along the lane and there being gates open in all sorts of places, I excused myself and we quickly concluded our call, before riding quickly out to prevent the heifers going too far.

The gate from Flat 4 was ajar, someone presumably having been itching themselves on the latch until it accidentally opened and out most of them walked.  There were three left in the paddock.  I opened the gate properly, so they could come back after their walk up the lanes.  Finding nothing of much interest where they could get to, they did return after a couple of hours and I shut them in again, since there's still lots of feed here. 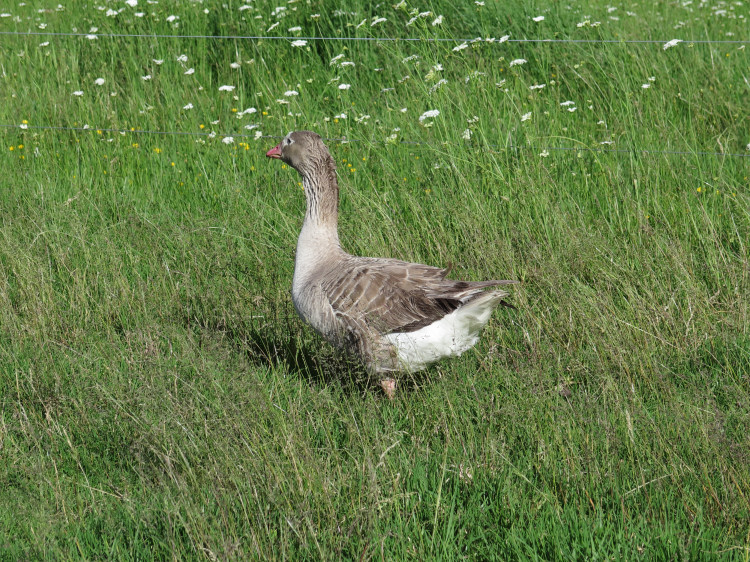 Madam Goose must be nearing the end of her pointless annual nesting period.  She looks noticeably thinner. 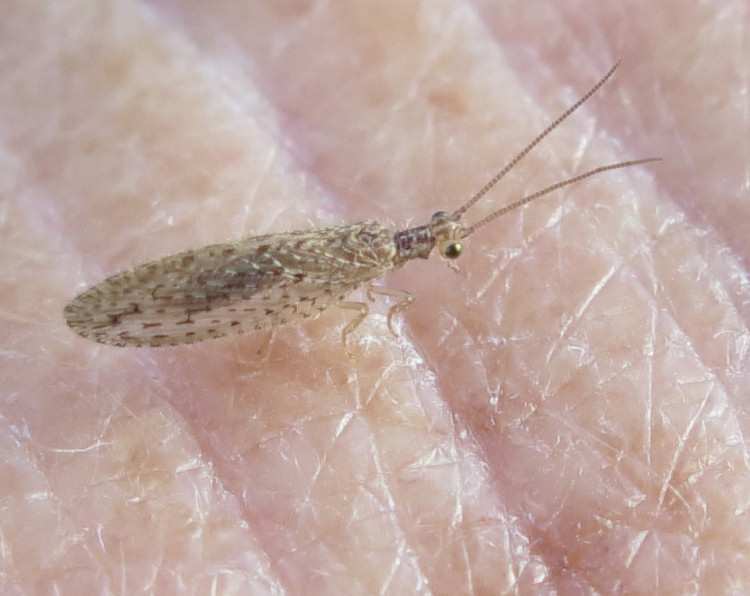 This tiny, pretty insect landed on me when I was moving the cows and calves from the Bush Flat to the Big Back North this evening.  It reminds me both of my paternal Grandmother and some piece of her furniture, a little side table with very delicately-turned legs. 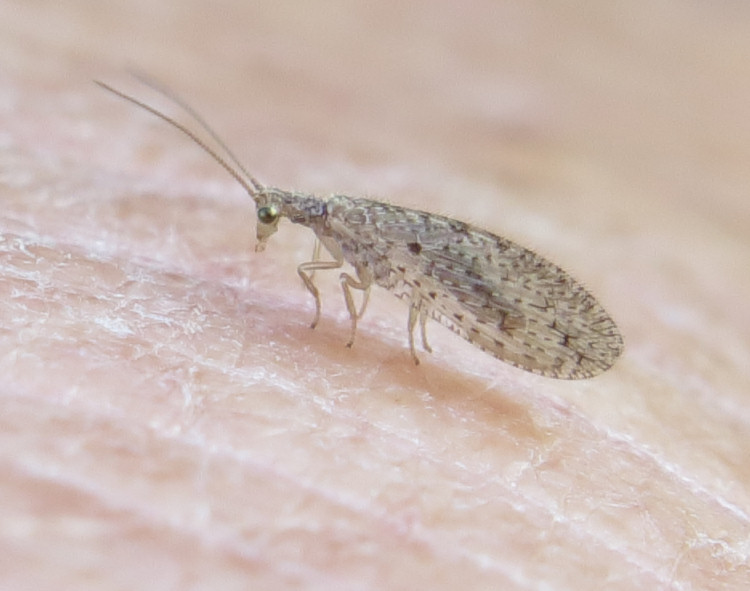 My Grandmother was a delicate little woman - very capable when I was a small child but by the time I was into my early teens, much more frail.  Is it the apparent frailty and translucence of this creature that reminds me of her?  It might be that and the wings: Granny often wore a grey, pleated woollen skirt.

It is not the antennae. 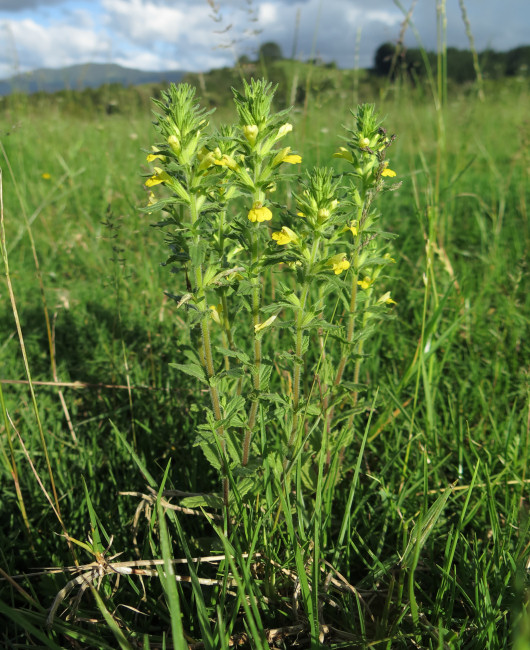 On my way home again I picked a lot of Tarweed.  This one was out in the middle of Flat 5d.  It is listed as an annual plant but I have wondered if plants like this may have resprouted from roots of plants from last year.  The stem is significantly larger than I find on the smaller seedling plants.  Perhaps they're having a very good season and this is a well-established new plant. 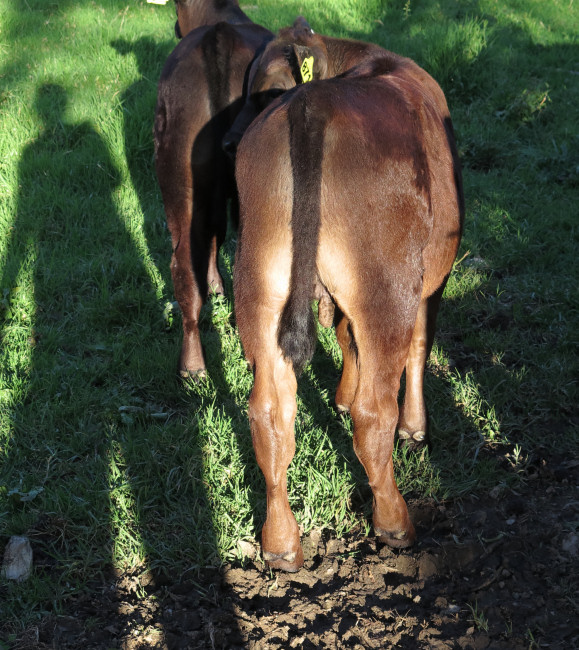 The scrota on all the little castrated bulls are now shrivelled to some extent, which is a good stage to have reached.  I check them daily in the days after the rings are applied, to ensure there's no untoward swelling, then the next risk period will be when they begin to come away from their bodies, creating a temporary skin wound. 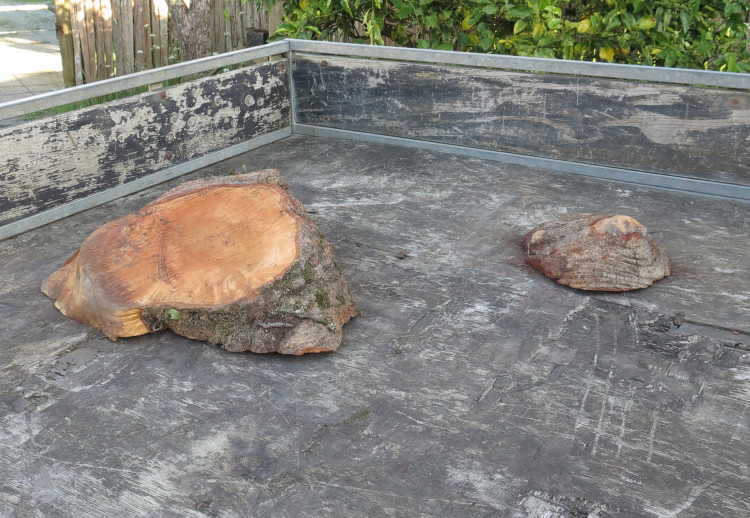 This is a potential "before" photo: these bits of Taraire might appear in another form one day.  They came from a big fallen tree on Brian's place he needed to clear away from where it fell down.