The week beginning the 14th of September 2019.
Saturday the 14th 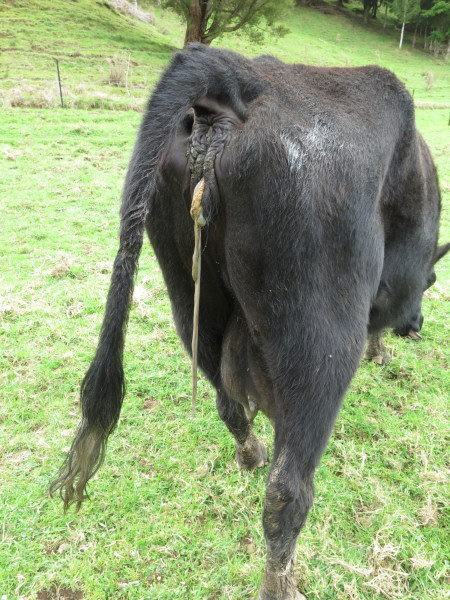 Not a lot of change here since yesterday.

We were hoping to dash off for a couple of nights this weekend but with Fancy in this condition, I didn't want to be far away.  If she gets infected and sick, I want to get a vet to her as soon as she needs one, not have her wait just because I'm not looking.

She looks quite miserable, but not unwell.  I feel miserable about and for her too. 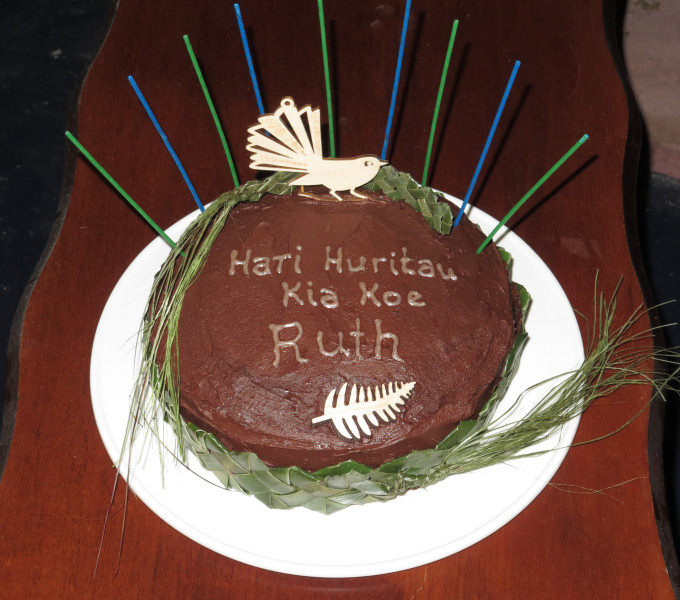 I was sitting around minding my own business this afternoon when Raewyn and Mathew and family arrived with rather a lot of food.  I didn't think much of that until other people began arriving as well.

Christina brought this lovely cake and Elizabeth arrived with a friend who'd come up for the weekend to stay with her. 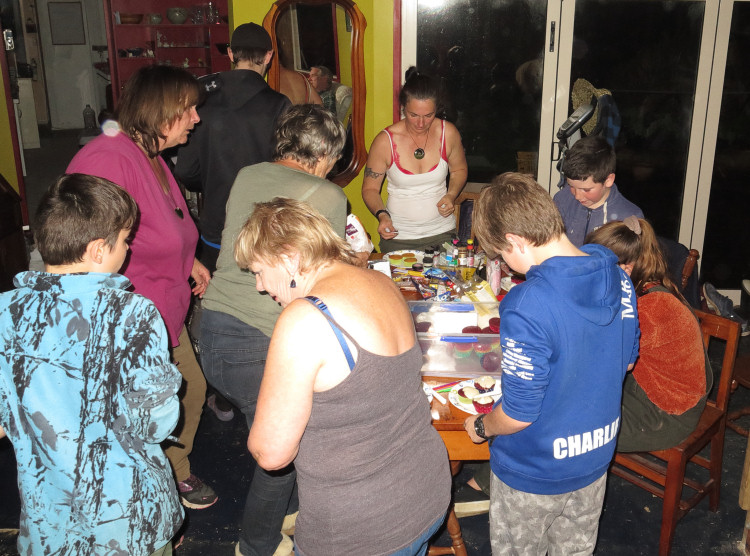 Raewyn had arranged entertainment, in the form of a cup-cake decorating competition. 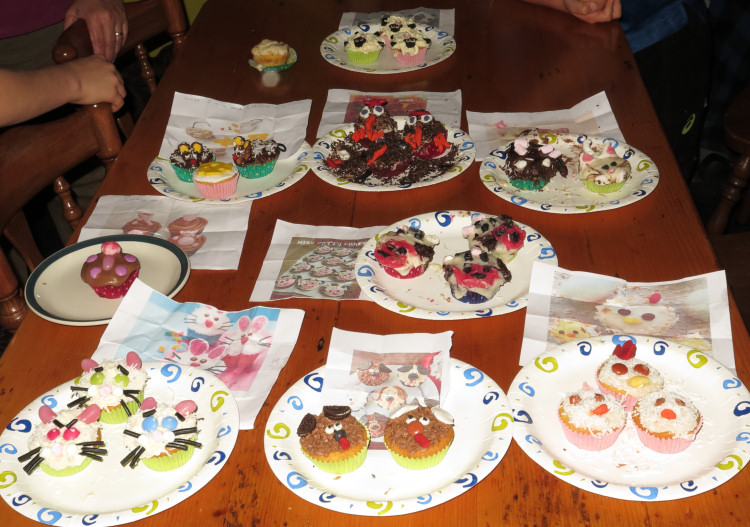 Results were mixed: from outstandingly good to rather messy!

The sheep at the back were very good and the Kiwi were funny.  I hope they all enjoyed themselves.  They seemed to be having a lot of fun.

This explains, I'm told, why nobody talked to me on my birthday. 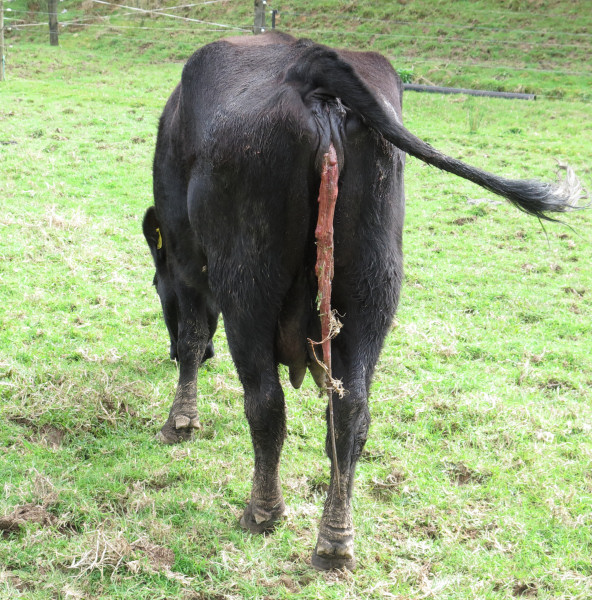 This looked a bit more hopeful, even though it smelt worse and was obviously annoying her.  I think if it all comes out like this, nothing will be accidentally left behind, which is the worry with rotting membranes.  They are pretty tough though, even when in a decaying state.

I came back again a couple of hours later and Fancy had dropped the afterbirth somewhere; but despite walking over the paddock thrice, I never found it.  I did think some of the pig rooting looked rather fresh, as though some feral pigs may have been out on the paddock with the cows in the mean time and they would have eaten it.  It is most likely that it all came out, so now I will continue to watch her closely to ensure she doesn't get sick, while her body tidies itself again. 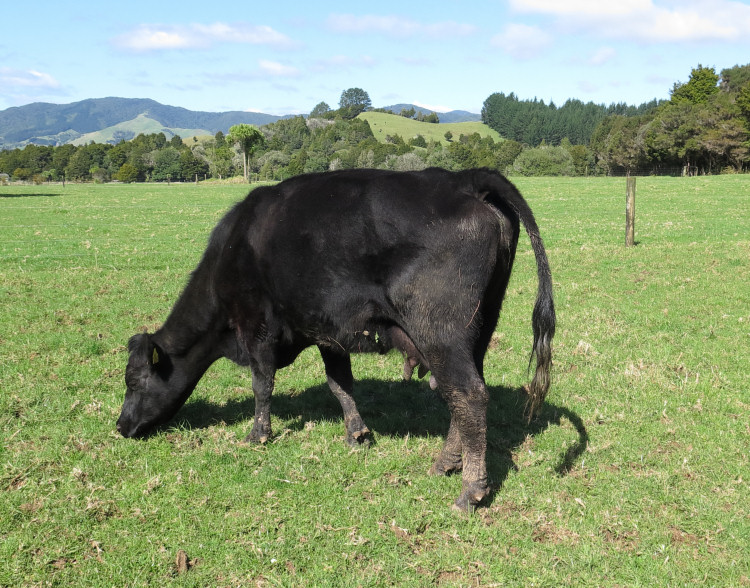 Fancy is behaving normally, grazing quite happily and other than having her tail out all the time, seems ok.  I had worried a little about not having checked internally to ensure there wasn't a dead twin but I'd concluded the dead calf was of such a size that a twin was very unlikely.

I wonder if this tail out behaviour is because she's really sore still?  Or just internally uncomfortable because of the whole process?

Her udder must have filled very quickly in the day or two before birth and continued afterwards.  There is nothing to be done about that either.  Her body will restore itself to normal over the next few weeks. 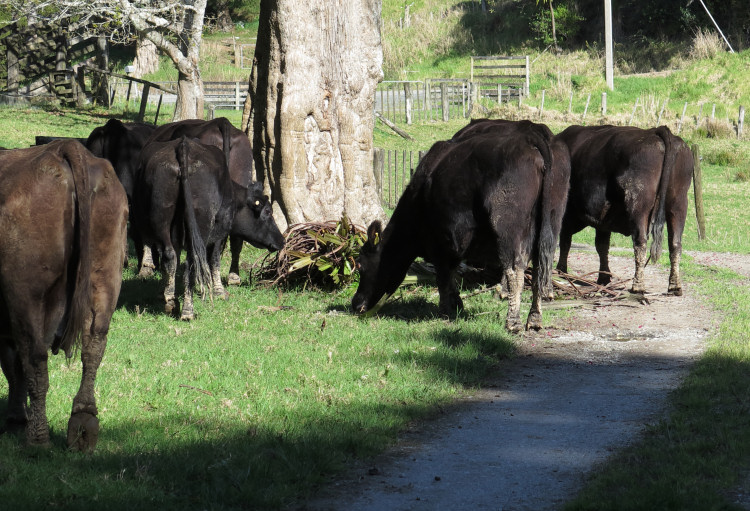 I brought the 15 cows in for their last pre-calving copper injection.

Many udders are looking fleshier now, as they start preparing for calving time. 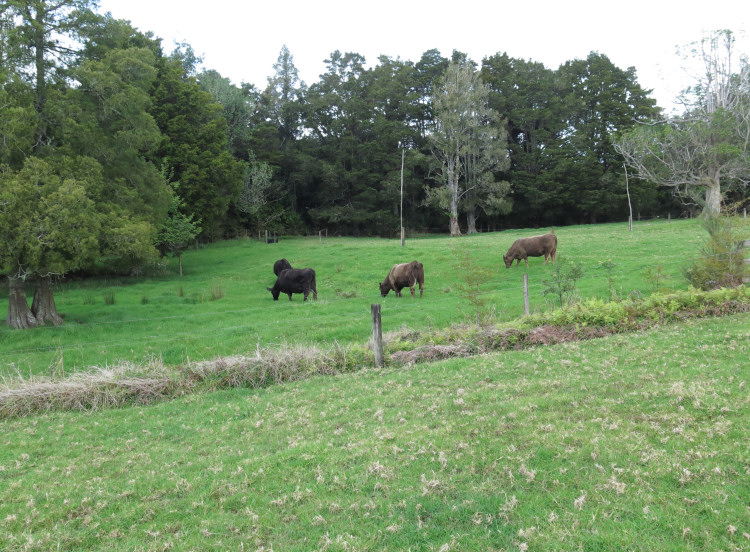 We coppered the rest of the cows this afternoon, then Zella and friends went into the best grass on the farm: the little corner between Flats 1 & 2, which hasn't been grazed since early June. 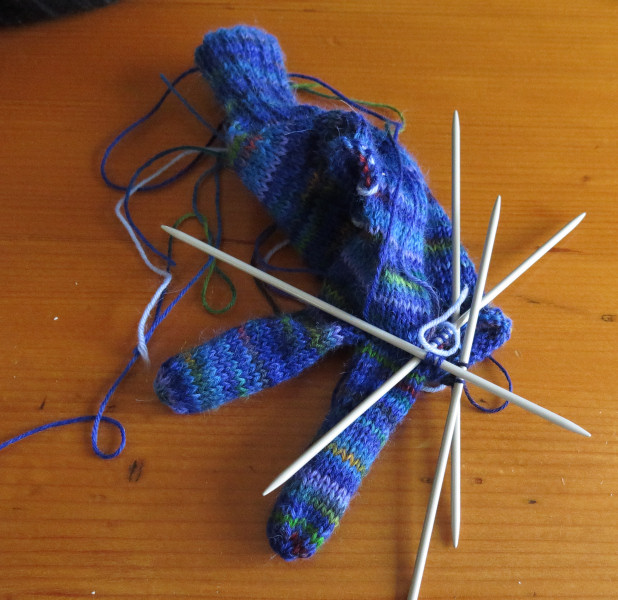 Having sent a right-handed glove to Anna to confirm its acceptable size and feel, I have been knitting its match.

I need to courier it to Auckland today, to ensure it gets there in time for Anna and Simon's departure to Holland on Saturday!

I've been knitting during the last two evenings to make the body of the glove and the first two fingers.  Just before eight this morning I began the third finger... 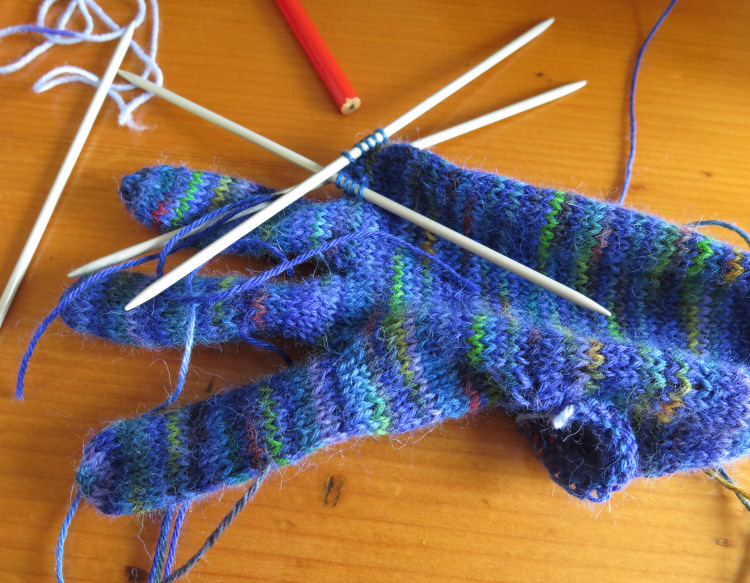 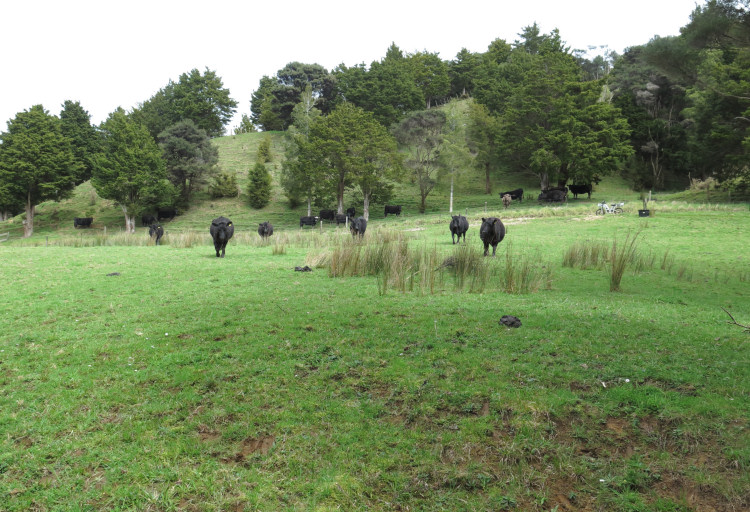 Here I was calling the seven pregnant heifers to follow me from half of the Frog paddock, where I'd left them yesterday, down to the stream crossing to the Swamp East Left.  My plan had been that they go there yesterday but when they started grazing the Frog, they wouldn't go any further. 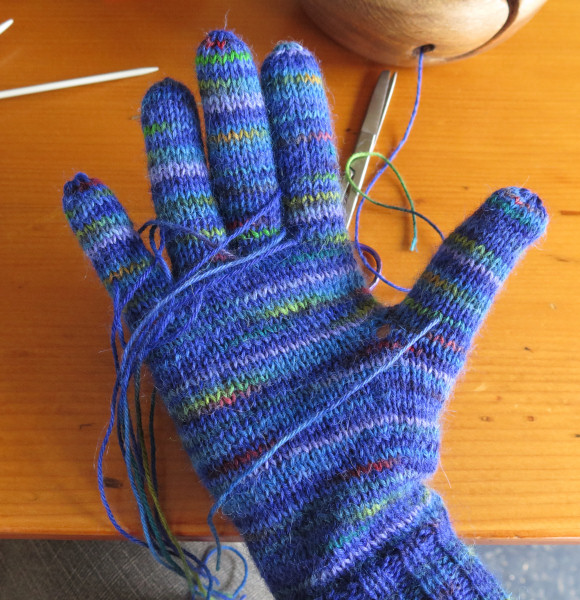 I finished knitting the glove by 12.30 and then had to sew in all the ends, taking care to fill in the inevitable (I think they are, perhaps with more practice I'll avoid leaving them) holes and spaces where stitches had to be picked up for fingers and thumb.

At two o'clock I was in the Post Office, finding an appropriate courier envelope to send this precious item to Auckland, where it arrived in very good time and spent two days sitting in Miriam's mailbox before I asked if it had arrived successfully and she discovered it in time for Anna to take it away with her!

I could not find a te reo name for this important date, on my third day of speaking te reo only for Mahuru Māori. 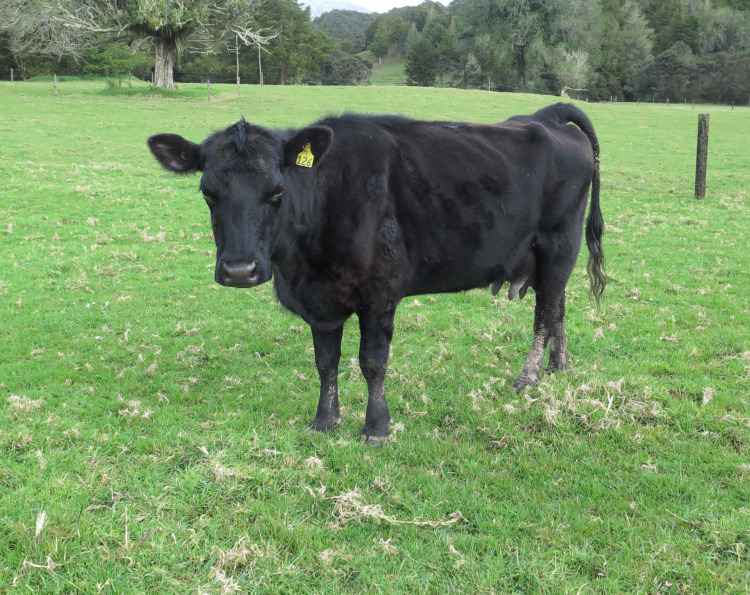 Oh so thin.  Fancy has lost quite a bit of weight over the last week.

My observation is that a serious immune system challenge will cause weight to melt from the body of a bovine, so that it becomes obvious within days.  Feed scarcity takes four to six weeks to show.  Getting weight back on again noticeably, takes about six weeks. 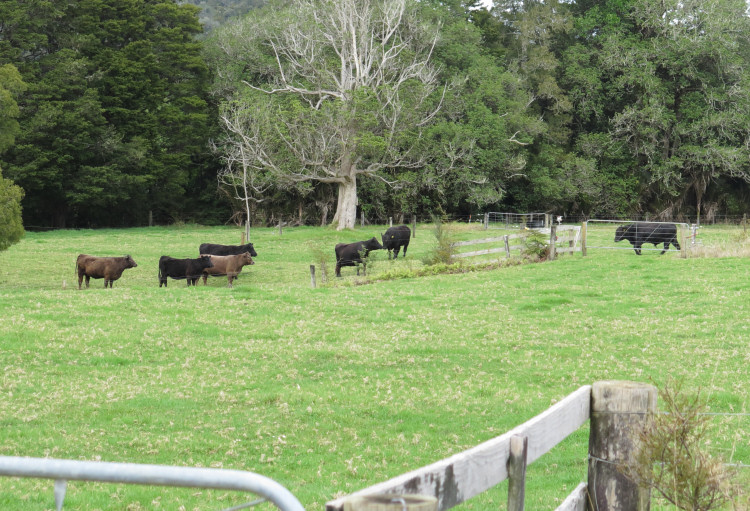 As I was preparing to move Zella and her friends, I heard the bulls growling and running down the paddock toward them as the cows gathered near their gateway.

They've been neighbours for the last couple of days.  Movement obviously excites bulls! 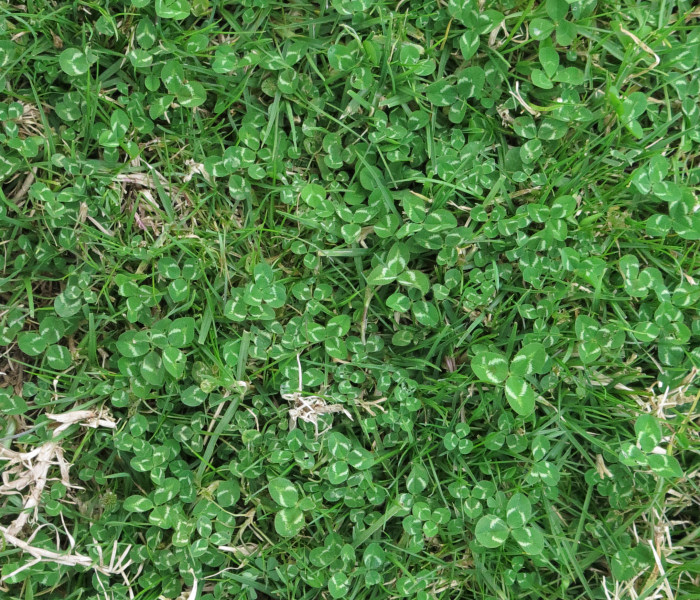 I don't remember seeing so much clover with these leaf markings in other seasons.  Perhaps it is more prominent this year, at the end of a warmer- and drier-than-usual winter. 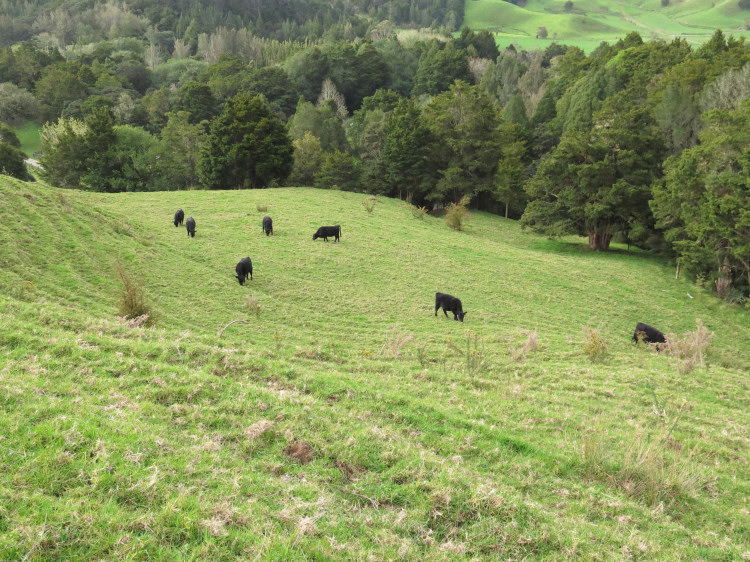 Up on the hill this evening, the light was not really quite this bright at a quarter past six.  We've reached that short period in the year when the daylight extends increasingly noticeably and then Daylight Saving will kick in (on the 29th) to change it even more.

We had spent the day tidying and preparing for our guests, Cathie and Andrew, who arrived in time for dinner this evening.

Stephan used their impending visit as a prompt to work on the missing bit of ceiling in the spare room, removed when there was a leak, some many months past.  The holes that are our storage cupboards now have doors and even the small wardrobe has a sliding door, making it look much more like a finished room, rather than a work in progress.  Some paint is yet to be applied to the new bit of ceiling and the walls where dampness previously caused some paint to peel.  Obviously we'll need more guests to spur that ongoing improvement.