The week beginning the 21st of September 2019.
Saturday the 21st

We had another one-day te reo gathering at Te Wānanga today.  Cathie and Andrew, to my surprise, are quite keen on motor sports and so while the awful car rally and its road closures inconvenienced the community again, our visitors were quite happily entertained by its progress up our valley during the early afternoon, while we were out. 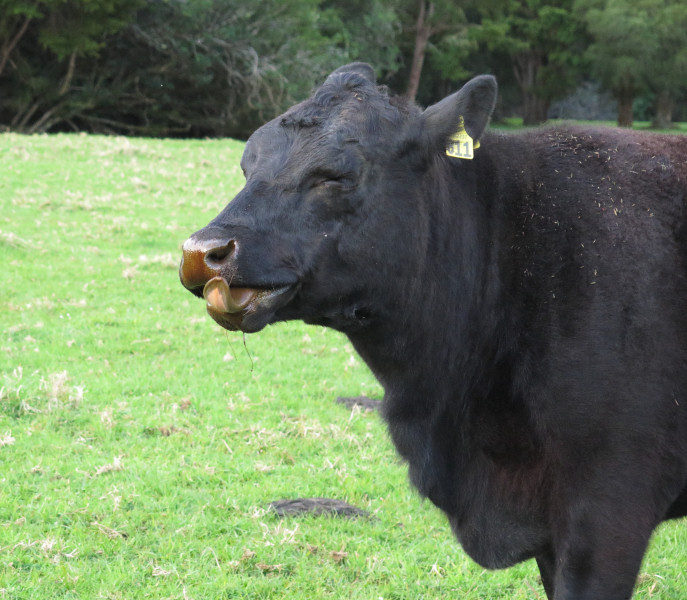 811, considering whether or not she likes the taste of molasses.

Because she was so slow to lick it up in the first three or four days, she kept missing out on her full share, because as the top cow in the social ranking finishes her portion, she shoves the next cow out of the way and so does the cow she's displaced.  The lowest cow in the order loses her place but is never brave enough to go looking in the deserted bins, which often have some left.  Most of them learn over time, as well as developing a strong liking for molasses that makes them more enthusiastic about getting as much as possible. 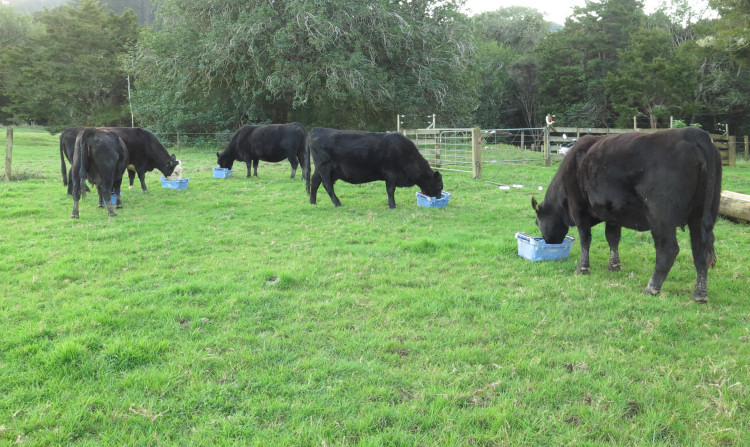 811 is here on the right, the last one to come to the bins this afternoon and she waited until I took the bin over to her before tasting it again. 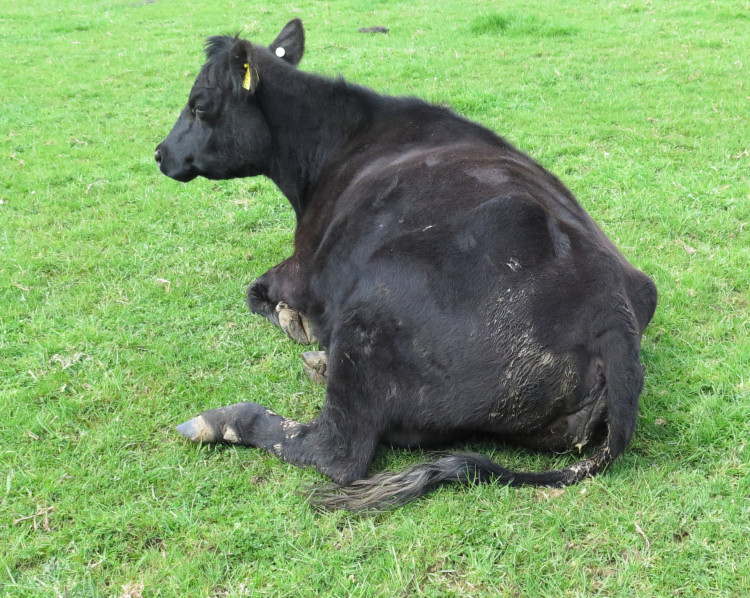 Fancy 126 is still behaving quite normally although now producing little pools of pus-coloured mucous wherever she lies down.  It doesn't smell bad and is still quite normal in the aftermath of a miscarriage.

I turned on my UBCO electric bike this afternoon, that fantastic (and expensive) machine I bought at the end of January this year, and its fault light came on and it wouldn't go properly.

I have so enjoyed the obvious advantages of an electric bike: no motor noise or smell, the ability to stop and go without having to start it up, its relative lightness and manoeuvrability.  But it has also been faulty from the start: sold to me with a faulty display - the clock never worked and nobody mentioned until a couple of weeks into my ownership that there was a known fault.  Every now and again it would simply not go and sometimes the display would turn itself on of its own accord.

In March we took it back to the shop and left it there while I recovered from surgery and since then it has continued to have niggly problems, gradually getting noisier in its motors and now it doesn't go at all.

I'm a week out from the beginning of calving and now this?  I'm beyond furious.

Do not buy an UBCO bike.  The company has advertised them heavily as great farm machines but I now have little belief that they're fit for purpose.  Or I've been extremely unfortunate in having bought a one-off dodgy one; in which case someone had better replace it quick smart.  I didn't spend a whole lot of money to have to walk everywhere at one of my busiest times of year.

Yesterday evening as I moved the cows from one paddock to another, I watched Endberly walking along with her tail out and feared something might not be quite right.  So I headed the cows off before they went out to the Small Hill paddock and put them in Mushroom 3 instead, where she would be easier to see this morning - and easier to check around the paddock if anything is horribly amiss.

Today she looked entirely normal again.  Maybe her calf had got into an uncomfortable position, prompting her to hold her tail out.

Then a check on the seven pregnant heifers and there was 792 sitting with a reasonably significant pool of fluid behind her.  It didn't look quite like urine and when I dabbed a finger into it, it was mucous.  I'm not sure what's going on there!  So I moved them to 5b where again I could see if anything untoward happened.  Nothing did.  Sometimes the cows have quite big strings of mucous down their tails in late pregnancy and I suppose if such a string was collected on the ground, it would make an obvious little pool.

I remain nervous after the death of Fancy's calf.

I had a lovely grooming session today with some of the cattle.  They enjoy the attention as much as I do a good massage.  And it's a lovely thing to do, from a meditative point of view.  I always feel calm and happy when brushing cows and untangling tail hair. 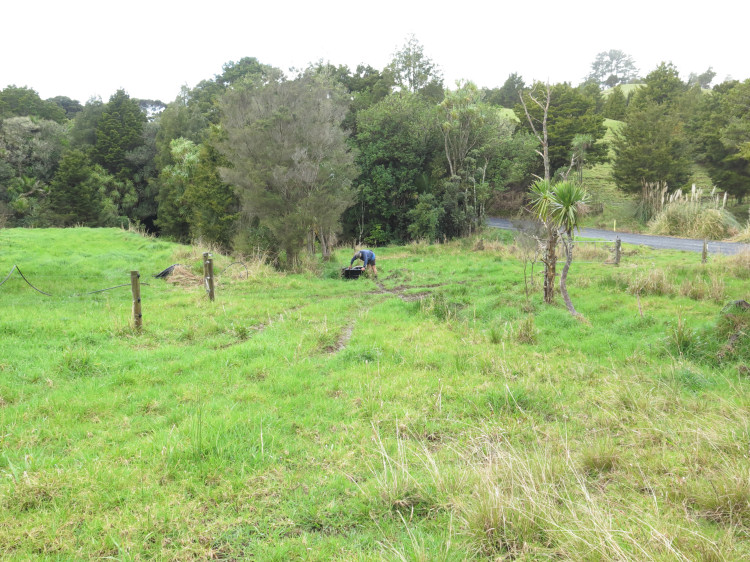 I wanted to put the pregnant heifers over the stream into the Road Flat paddock but we decided we'd move the trough before they came in.  It's too wet where it is and we intend erecting a double fence along the roadside that will change things near the gate.

Stephan dragged the empty trough up along the orchard fenceline to the left ... 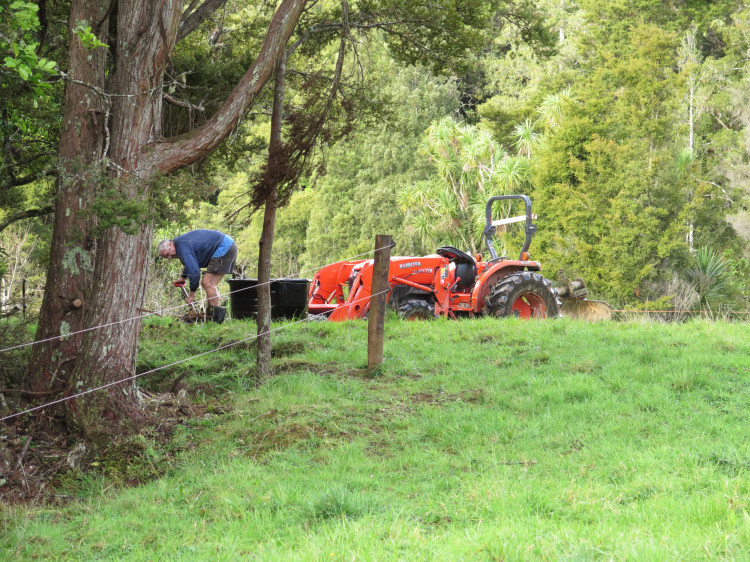 ... to the higher area beside the trees above the stream.

It'll be a lot less boggy here for the animals and less road dust will end up in the trough.

I called the heifers out of Flat 5b, tricked Imogen 155 and 792 into going into Flat 3 instead of Flat 4 with the other five, then took the five down to the stream crossing and over to the Road Flat.  The other two were not very happy about it but they're due to calve earlier than the others and I'd like to keep them under closer observation and start giving them magnesium every afternoon. 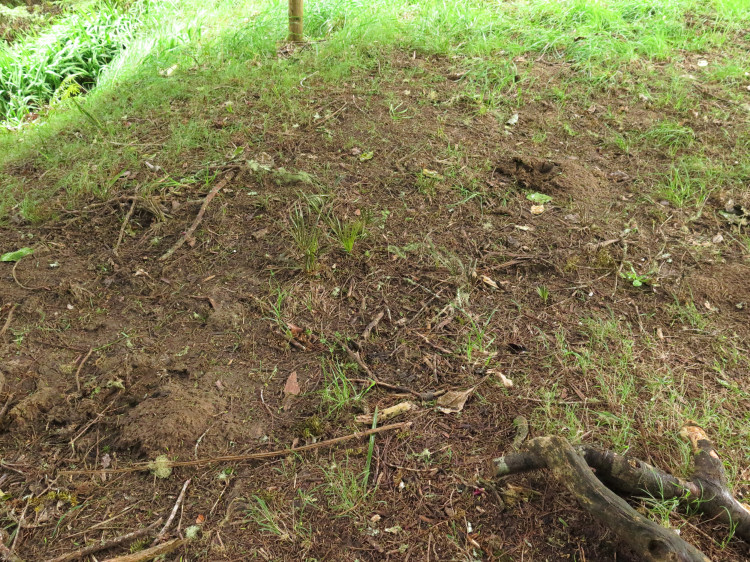 As I set up the crossing for the heifers to go across the stream, I vaguely noticed the presence of a lot of old cow manure under the trees and it wasn't until I was coming back again that it dawned on me that this was not as it should be.

These are the manure piles of resting animals and our animals only walk through here briefly, on their way to or from the paddock over the stream.  What's happened here?

I looked around to see if there was any evidence of animals having come from next door through the fenced stream reserve but everything there seemed in order.  It wasn't until later at home that Stephan and I concluded that I may have left the tape gate open at the bottom of Flat 4, after last taking heifers to the Road Flat and that he might have shut it a few weeks ago when he was checking the electric fence for faults.  But during the time the gate was open, I've had cows in Flat 4 and they would probably have enjoyed sitting in the shelter of the big trees in that nice river bank area. 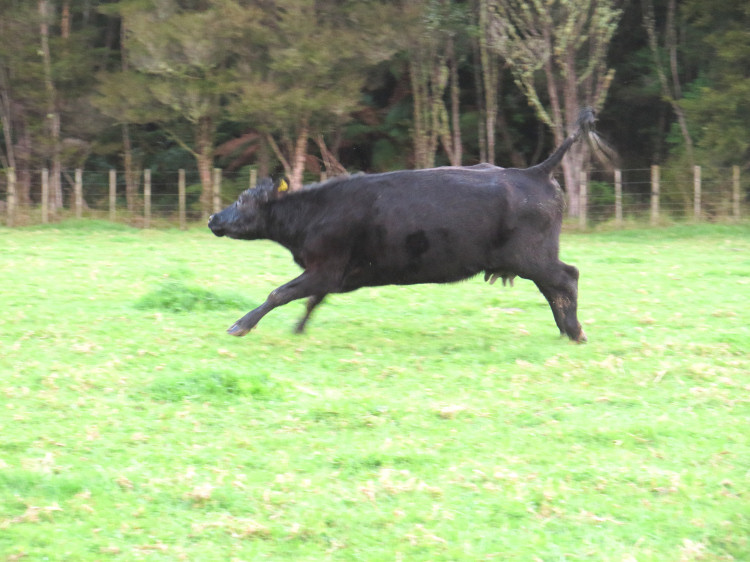 I have a strong suspicion that Fancy 126 is feeling quite well.

She just about bowled me over as she galloped up the paddock for her molasses this evening, kicking up her heels and twisting about.  Her behaviour was a bit exuberant for her heavily-pregnant paddock mates but I'm glad she's getting better. 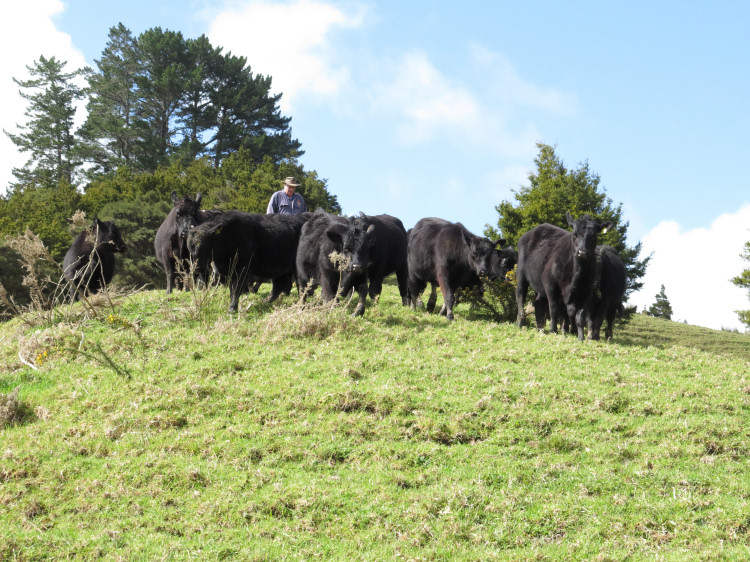 Time for the youngsters to come off the hill Over the Road.

They'll have to go onto Jane's place, which I've only grazed once with the cull cows since the disorderly, rude young neighbours' calves got in there last year.  Hopefully we've quarantined it for long enough to significantly reduce the risk of infection by novel bacteria or intestinal parasite species.  The nasty young people have gone but the long-term effects of their presence (my concern for my animals and the depletion of the local Kiwi population) remain. 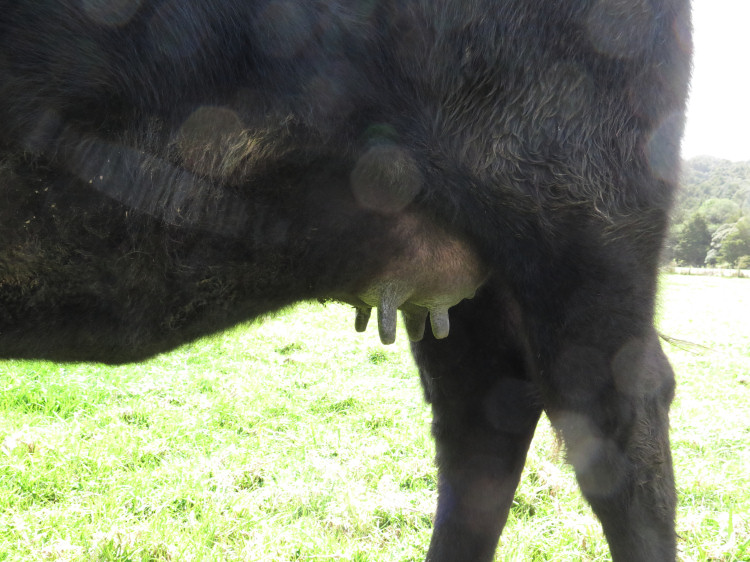 I'm watching the development of 811's udder with interest.  Because I have known 13 of her foremothers, I have some idea of how she might look in maturity.

Stephan has had an emotionally exhausting week.  After his brother died, it was discovered that Richard had managed to save quite a bit of money over the last few years and so it will be shared amongst the five remaining siblings.

As inheritances rightly belong entirely to those who inherit them, Stephan can do whatever he likes with that money and what he would most like is to own a digger, preferably a yellow one.  (I'm reasonably sure the last bit is a joke.)

On Monday, friend Kees rang to say he'd spotted a local digger for sale on TradeMe (the NZ on-line auction site) and thought it would be worth a look.  The man selling the digger then got busy with other work and kept not phoning back to arrange an inspection time with Stephan and Kees, and Stephan thought he was going to miss out.  But yesterday they went to see it, Kees gave it a thorough mechanical inspection and declared it a sound prospect and so the deal was done! 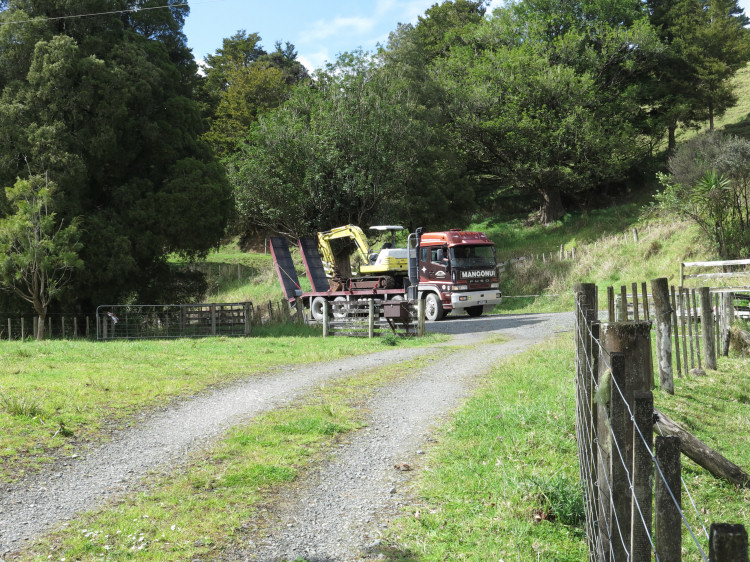 This morning Stephan drove in to Mangonui Haulage's Kaitāia depot, to go with Wiremu in the arranged truck, out to pick up the digger and bring it home.

I waited out at the front when I knew they'd be arriving, to take the necessary photos! 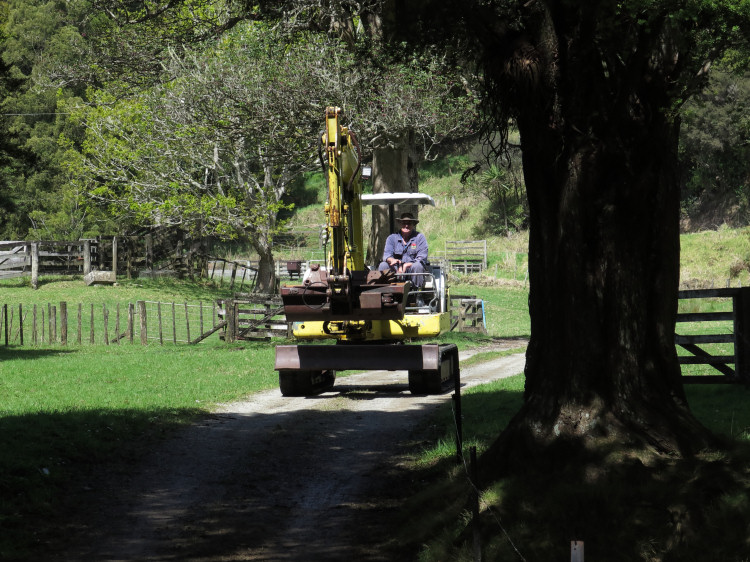 I offered to go back to town with Wiremu to pick up the ute but Stephan likes big trucks as much as diggers, so happily went off to town again.

When he came home, he drove the digger in to the farm.  He hasn't stopped grinning all day. 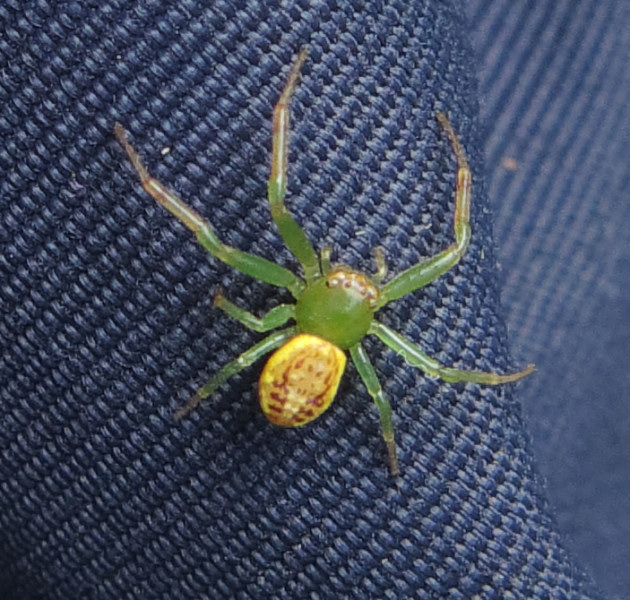 This tiny spider climbed onto me from somewhere when I was waiting out the front.

They're often on the gates, presumably one of the hunting spiders. 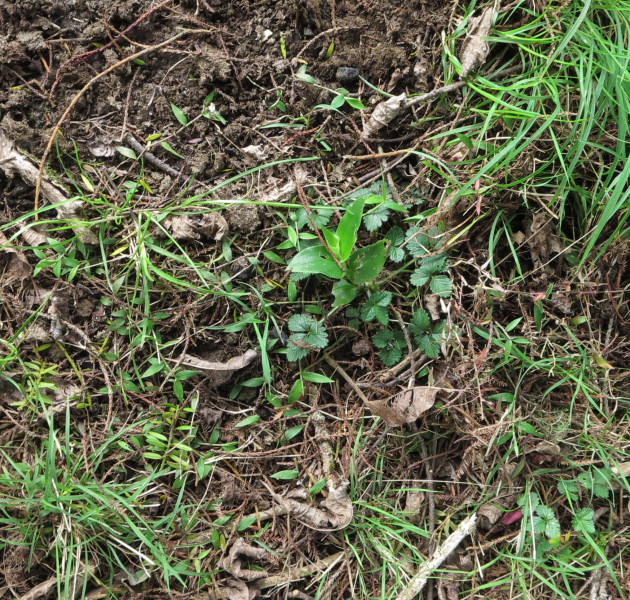 The little furled leaf plant in the middle of this picture is Tradescantia that must have floated out into the low bit of Flat 4 in a big flood.  On my way to check the heifers in the Road Flat, I happened to spot it and a number of others, which I carefully pulled out of the soil.  The plants weren't yet well-established but they had rooted to the ground.  These tiny pieces survive for ages and can establish themselves anywhere they land.  Then they take over. 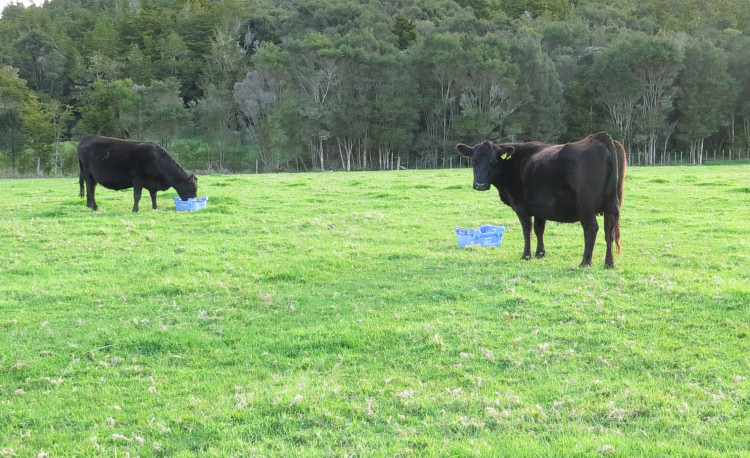 792 didn't want any molasses last year and she won't touch it this year either.  I've taken it to her many times, left it where she can smell it and taste it if she likes but she won't.