The week beginning the 5th of October 2019.
Saturday the 5th 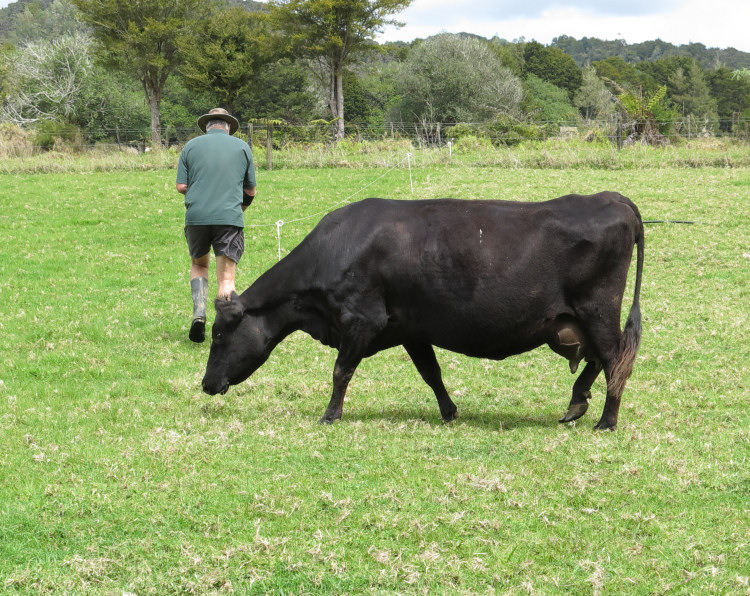 There's never quite enough grass for the cows' increasing appetites at this time of year but there'd be even less if we let them have all there is all at once.

Most of them have come through the winter well, so they'll get through.  It is frustrating that every year when we think Spring might have arrived and the grass will grow, there's more cold weather and it all slows down again. 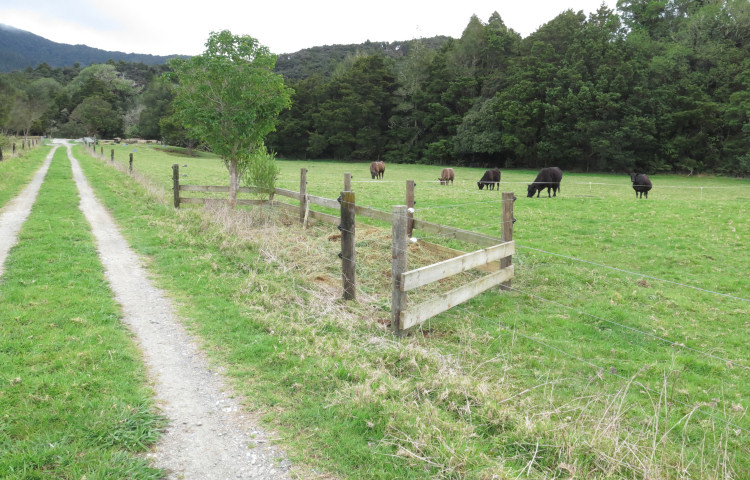 I went off for a sleep while Stephan altered the cemetery area in the House paddock, to include Demelza's grave.  From the far end under the tree are Damian, Yvette, Dotty and Demelza.  We'll plant another Puriri for Demelza, since she liked them so much. 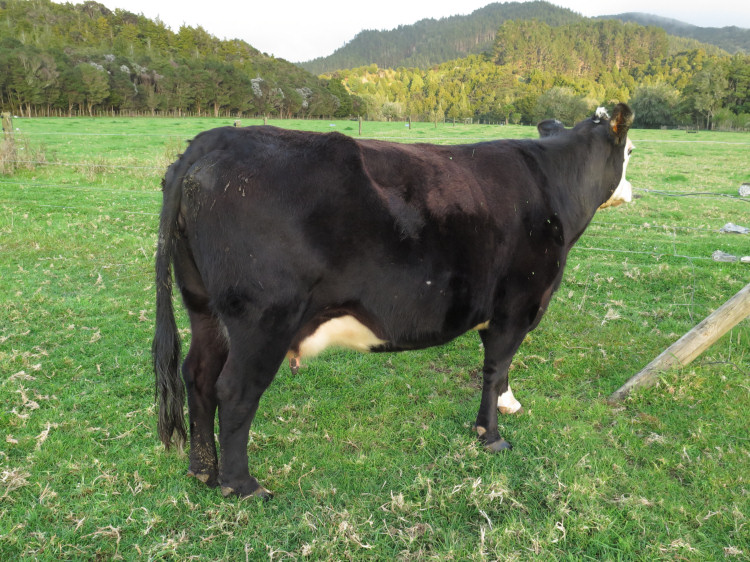 While Ellie 119 changed shape considerably just prior to beginning labour, 746's shape is not so noticeably altered.  The two cows are paternal half-siblings.

746 was in very early labour at this stage, the only sign being her air of distraction.  Today is day 278 in her gestation, her average being 276 days. 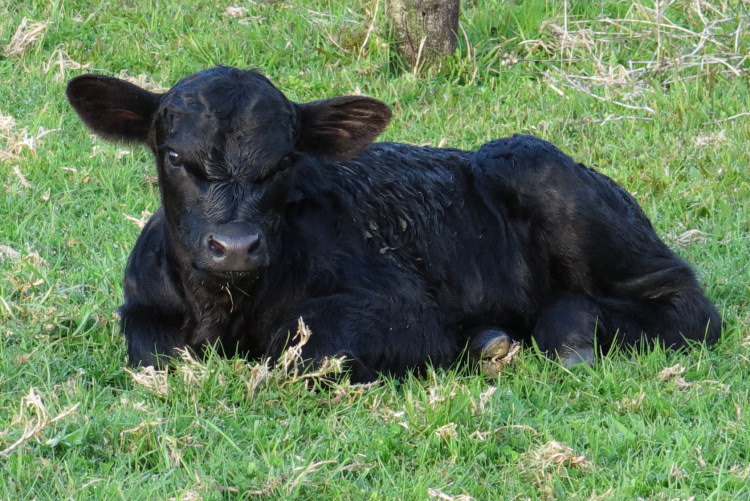 I always like to get a close-up calf face picture, for later reference, in case there's ever any sort of mix-up between cows and calves.  It's unlikely that the cows will get confused but possible that I'll make an identification mistake during tagging and want to double-check things later.

This is obviously Ellie's son, being the only calf on the farm so far. 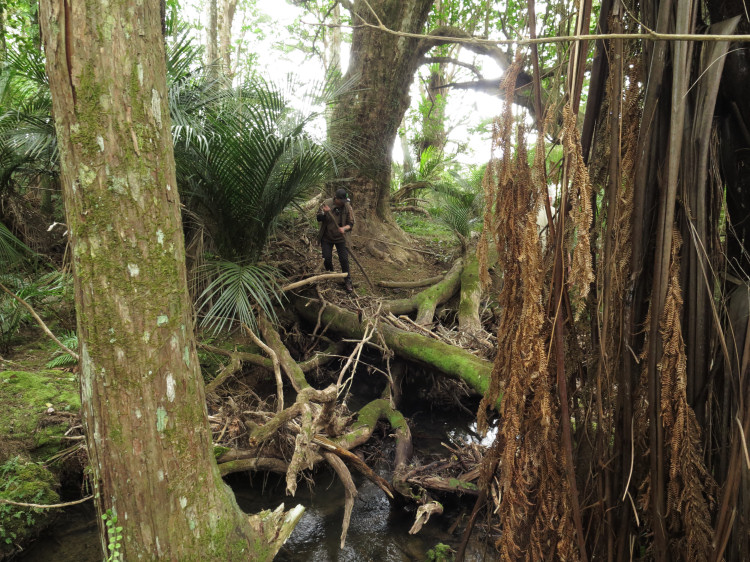 Kieta, one of our lovely te reo class-mates, came out for a visit today.  After lunch we went for a stroll through the big trees in the reserve alongside the House paddock. 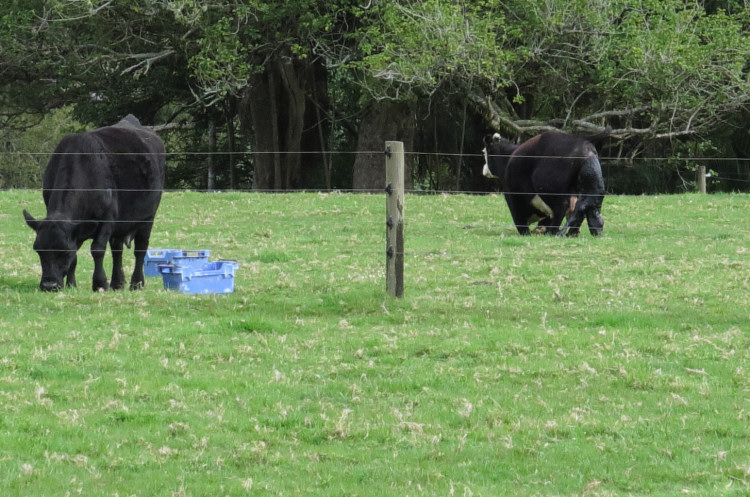 When I next looked out to see how 746 was getting on, I saw she'd begun the interestingly active part of her labour and it was time to go and check that the front feet were presenting.  Kieta and I stayed and watched the calf being born.

In the picture, 746 has finished pushing the bulk of the calf out and got up when she realised it was behind her, as they often do, before the hips had been delivered.  The calf hung from her until her next contraction, then dropped to the ground. 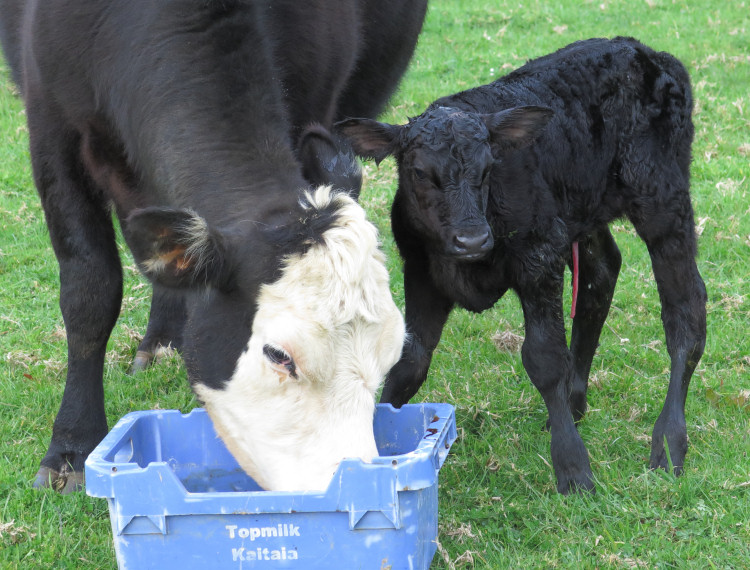 This is our first Bowmont Jackpot J310 calf, a bull, who will in the next few weeks be made a steer. 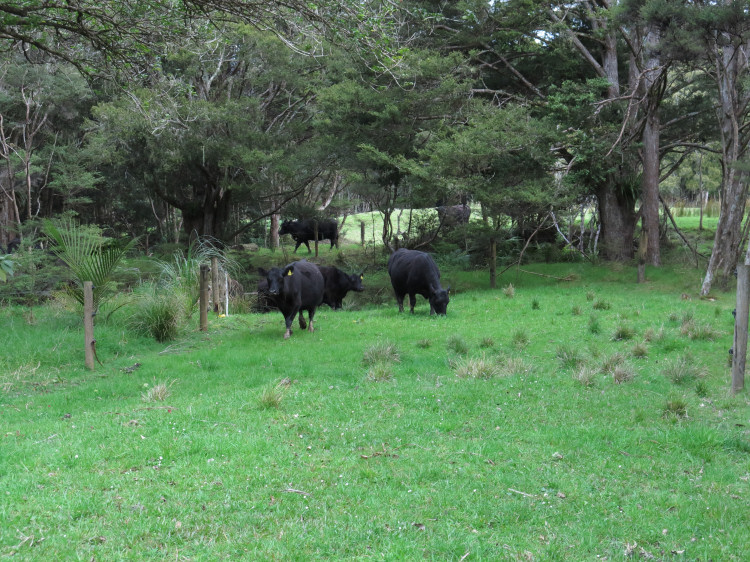 The rest of the cows are grazing places I know they can't get into too much trouble if someone suddenly does something unexpected, like calving.  I don't think that will happen but I'm always watching udder development and the loosening of the pelvic region, both of which are indications of readiness to calve. 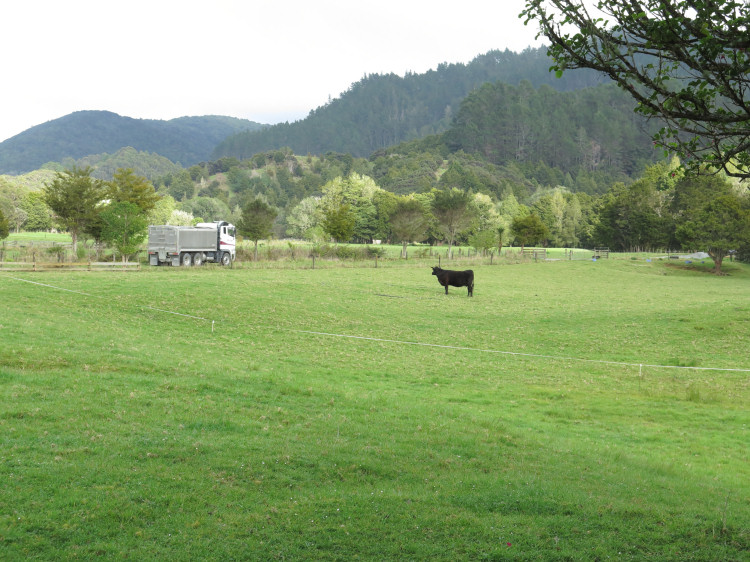 Having done what he wanted to with the ground levelling for the new yards, Stephan had ordered some more lime rock and this truck came and went four times today, the last time with a big load of builders' mix, for making concrete.

I watched the cows as it came and went and made loud noises when spreading and then dumping its loads, but everyone seemed unconcerned: calves kept sleeping, mothers kept grazing. 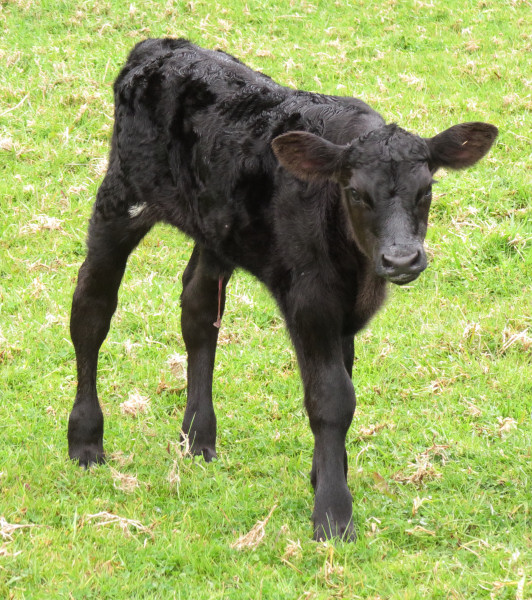 Today I noticed that 746's calf isn't quite as expected, having inherited a stray white patch, rather like some of those unexpected white bits on his mother's body!  On the photo of her yesterday, a white spot on her right rear foot is visible - and she has that characteristic white front leg.  White faces are expected to be inherited and there are many white tail hairs and udder patches in my herd but white on other parts of the body is unusual. 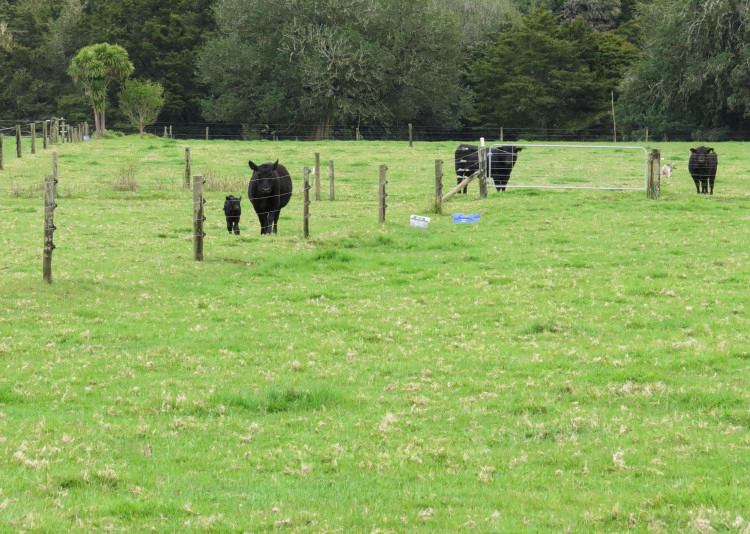 Ellie's calf was asleep in his usual spot in the corner of the paddock, until the bulls came growling over to shout at him for some reason.  Ellie came running to his defence and together they walked quickly down the paddock away from the bullies. 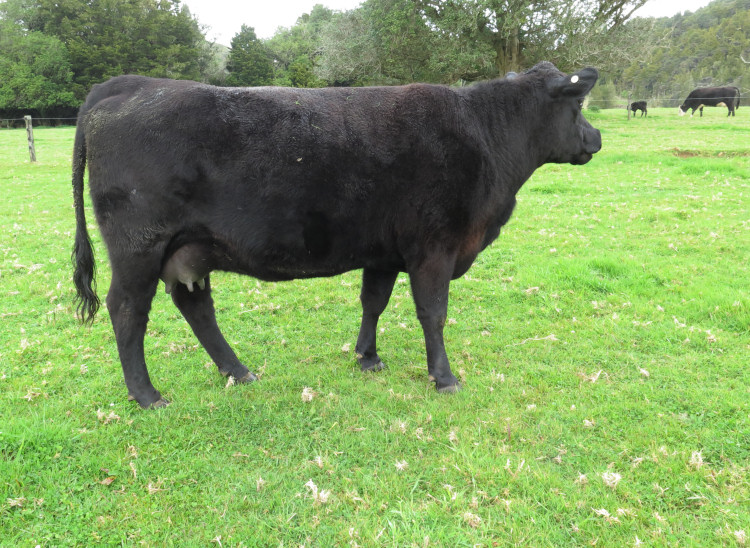 Phantom pregnancy?  I had thought, on her mother's gestation periods and her own, that 811 would have calved about four days ago. 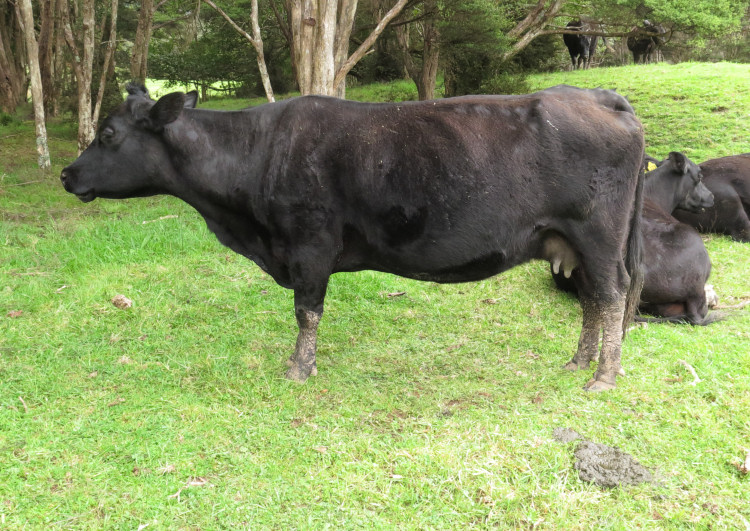 745 is very thin.  As I do every year, I began to wonder if she might be carrying twins, partly because her udder development seemed a little more than I think it ought to be yet.  According to her usual gestation periods (three of 273 days, one of 274) she should calve on the 17th or 18th.

She does come from a line of skinnies, so hopefully that's all that's wrong with her. 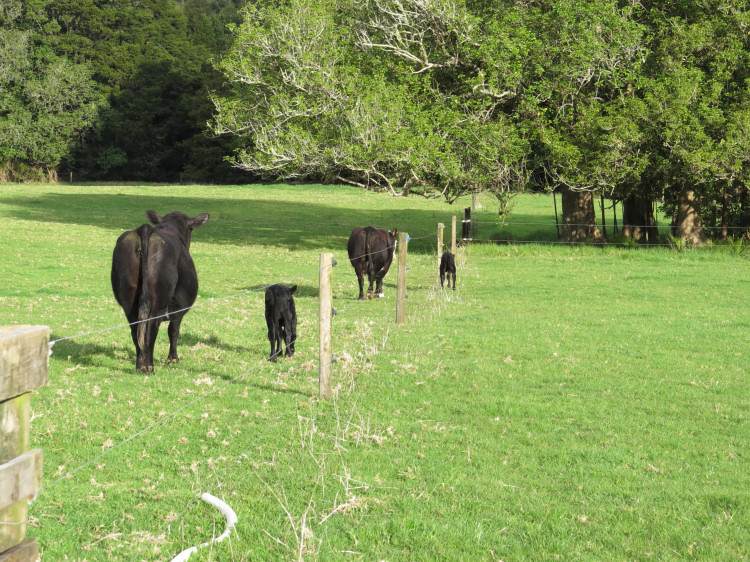 Ellie is still upset by anything she perceives as a threat to her son and today that meant another thing that looked exactly like her own calf.  Goodness knows how their minds work.

Unfortunately for 746's calf, Ellie's calf wanted to play and kept running after him wherever he tried to escape Ellie's attentions and so he kept being threatened by the big, mad cow who wasn't his mother.

Eventually I managed to guide Ellie and her calf away from the other two and calmness was restored for a while. 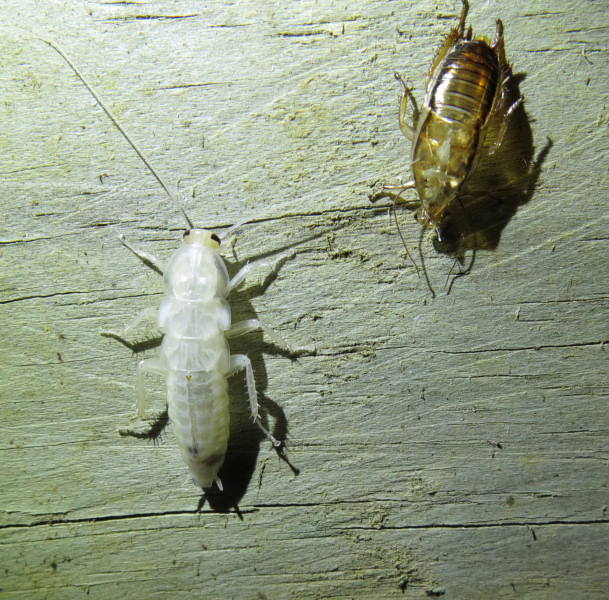 Coming back from my last check, I looked around the garden for snails to squash and noticed this albino cockroach, seeming to be attacked by the other one.  Then I realised that the other one was actually the white one's shed skin and white would have been only the temporary colour of the newly emerged, bigger cockroach. 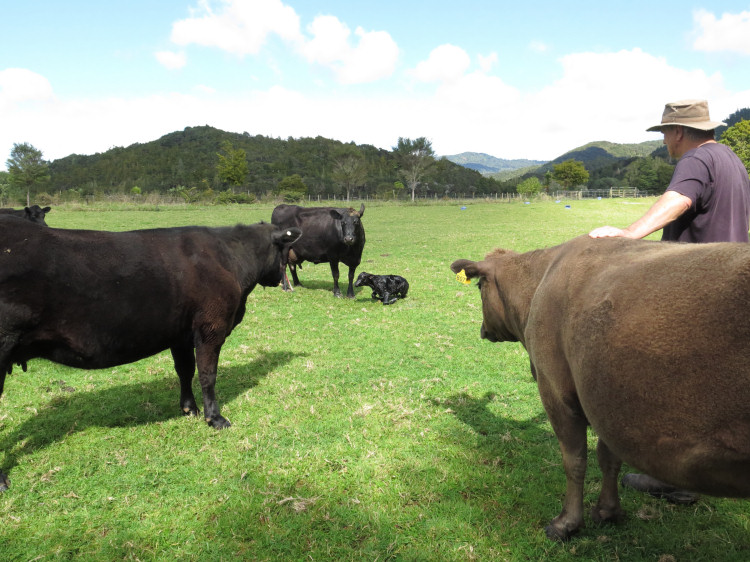 At 6.35 on this thickly misty morning, Zella got up from her resting place and immediately turned to sniff the ground.

At 7.30 she had separated herself from the others and was looking pensive.

At 8.30 she started lying down and getting up again.  Three quarters of an hour later I think the first bag must have emerged and burst, leaving only some white membrane hanging.  It was another hour before the bag containing the calf appeared, and soon after that I could see two front feet within.  It only took her anther five or six minutes from that point to give birth to the calf, a tiny heifer.

This is our first calf from bull 176, two days before his second birthday. 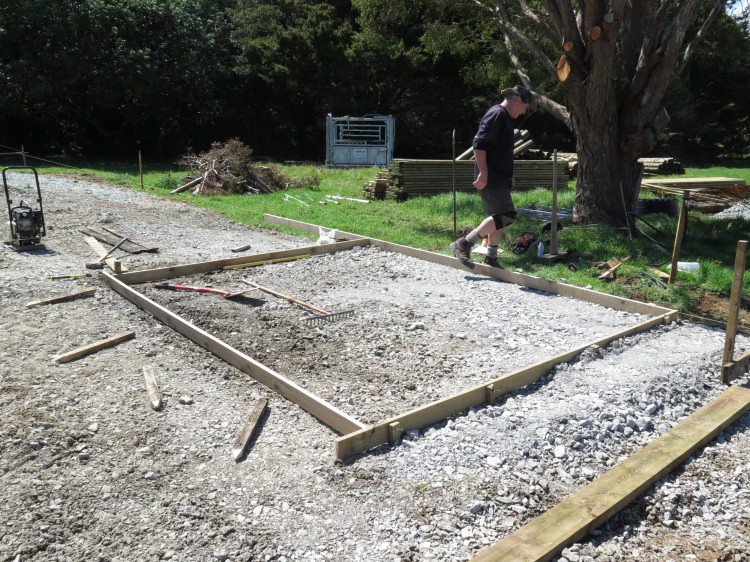 Stephan has been measuring and preparing things up at the yards site, getting ready to pour the concrete pad for the new cattle crush.

It's been a long time coming, with last year's delay while he replaced the boundary fence. 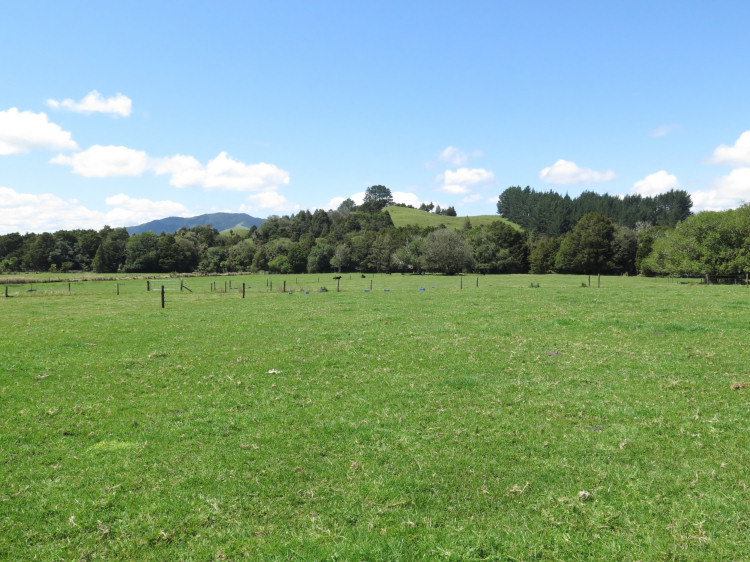 It was a stunningly beautiful spring day, warm with only a light breeze.

Back to wearing sun-block cream every day. 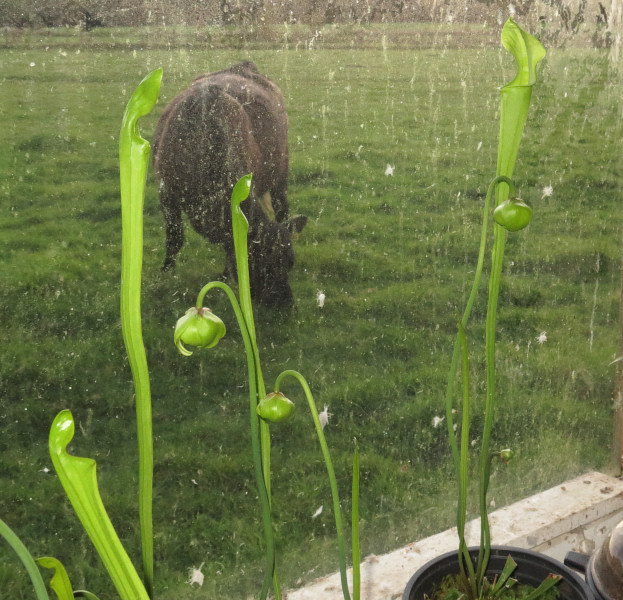 Please excuse the horrendous appearance of my aviary window as it is highlighted with the camera's flash.  The carnivorous plants L-J most recently sent me have been changing by the day.  After growing flower buds, tall spears grew very quickly, then took on a most interesting shape at their tops and then those hollow-feeling "leaves" opened to form the insect-trapping pitchers.  Fascinating. 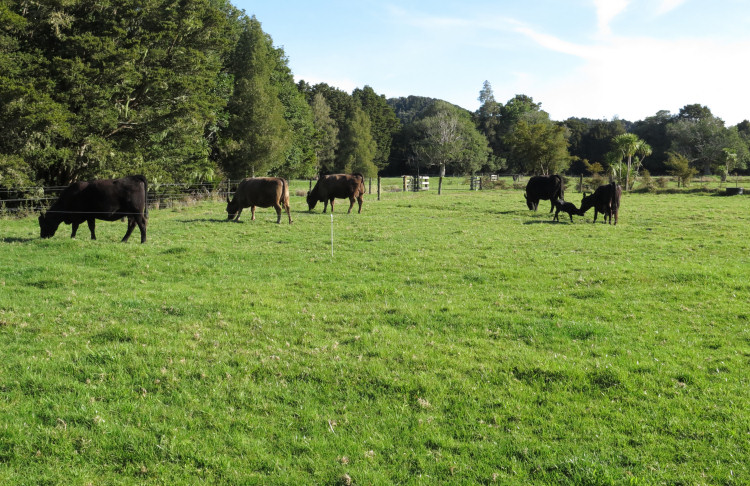 In the early evening I looked out the window to see that Zella had brought her daughter and joined the others in the newly-provided grazing area.

Third from the left is 812, in early labour.  All day long she'd been behaving differently, obviously very attuned to Zella's activities.

She began having obvious contractions at 8.27pm and the calf was born at 9.20, which is very efficient for a first-timer.  But then the trouble began!  812 was obviously very disturbed by her baby's appearance and I feared she was going to kill the poor calf.  She barrelled it across the paddock this way and that for several minutes, then knocked it over any time it moved in futile attempts to work out how to stand up.  I left her to it, there not being much I could usefully do - can't lift anything and it would not be particularly safe to get into the middle of that upset anyway.  In the dark, the midst of upset animals is not where anyone on two legs should venture.

In a show of unconditional love (survival, really), the little calf kept returning to her violent and bellowing mother, looking for a feed.  I didn't like to confuse things too much with my bright torch (flash-light) but I think the calf found the right place within an hour or so.  812 bellowed loudly every few minutes throughout the rest of the night.  Birth must be very disturbing.

I went to bed with ear-plugs.