The (rest of the) week beginning the 5th of October 2019.
Wednesday the 9th 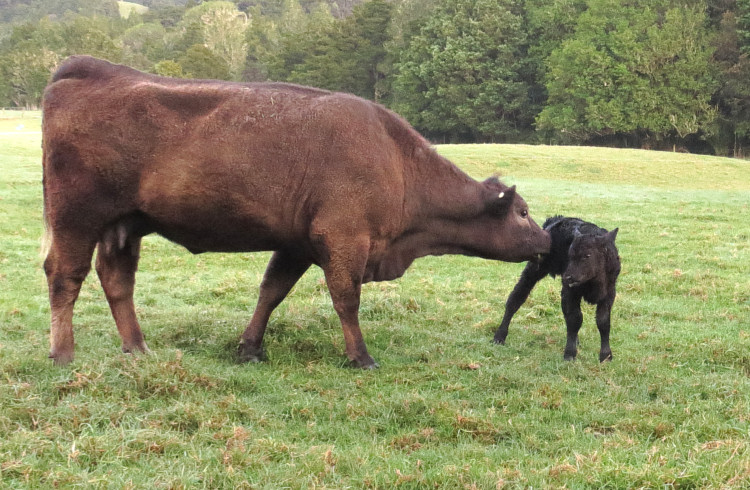 812, still mooing regularly at or about her daughter this morning, but at least she's stopped beating her up! 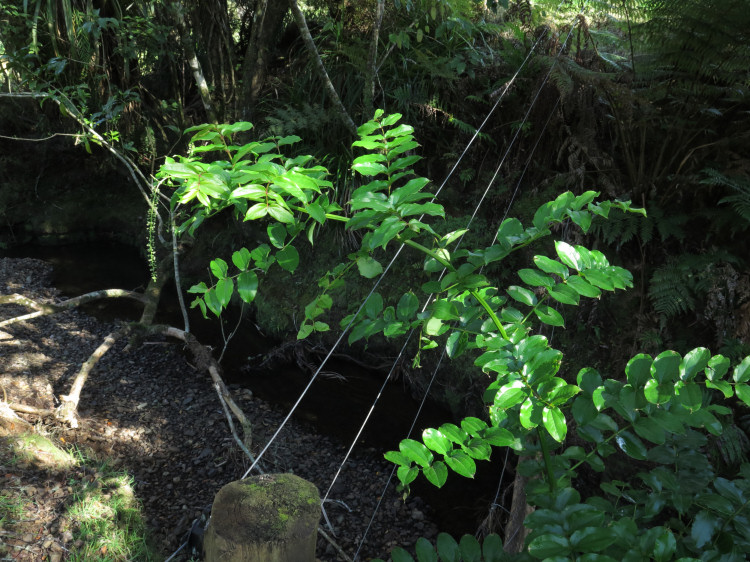 This beautiful Tutu plant was growing just inside a stream reserve fence and hanging very temptingly over the wires, so any browsing bovine could have had it. Tutu is deadly poisonous in some circumstances (I don't think anyone has defined those factors exactly - hunger/gut-fill, amount eaten, age of plant or animal?) and while I have concluded that the cattle must have eaten a lot of small seedlings along the stream banks before they were fenced off, I'd rather not have them accessing larger quantities where it has grown up now. I broke this lovely branch so it was no longer hanging over the fence. 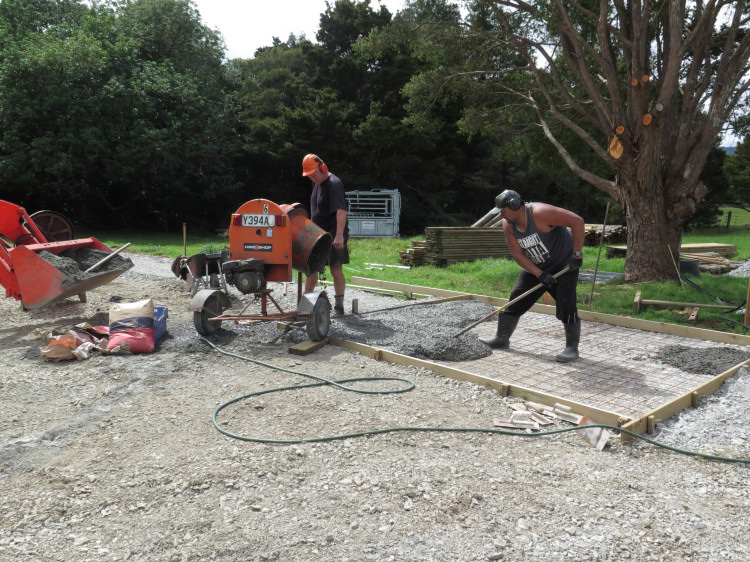 Yesterday Stephan was trying to think who he could get to come and help with the concreting. I reminded him that nephew Issa had told us about some friends who'd moved in to Takahue Road, whom we'd not got around to meeting yet. Stephan called in and met Andrew, who happened to be willing and available today!

After a false start with a dodgy cement mixer motor, a replacement was hired from town and work commenced with expert assistance from Andrew, who's done this many times before. 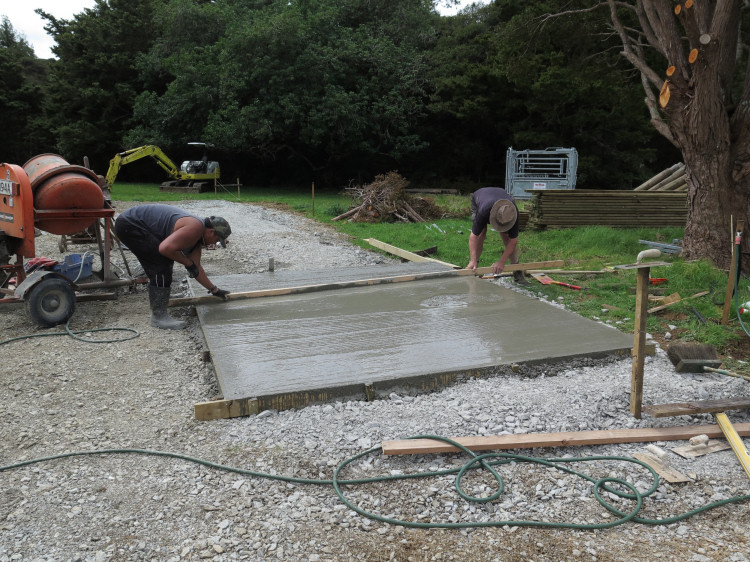 Two hours later they'd mixed and dumped all the concrete into the boxing and were screeding it off. 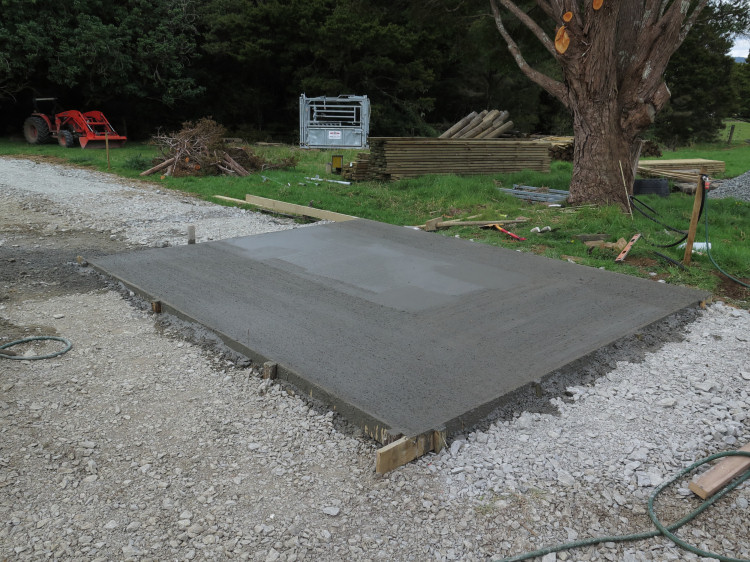 Stephan brushed the walking areas to give them a rough surface. 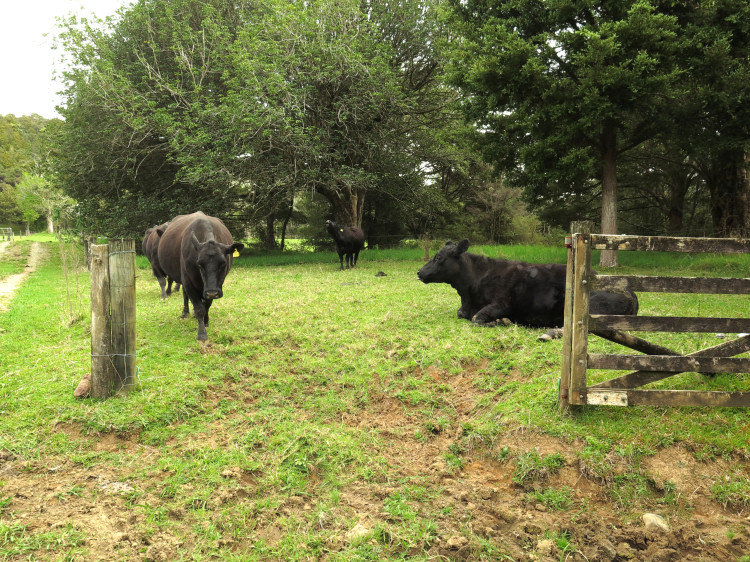 My not-quite-so-early cow mob. But why is Ida 145 sitting down when everyone else is standing? What's different about her? Twins? I can't help it. 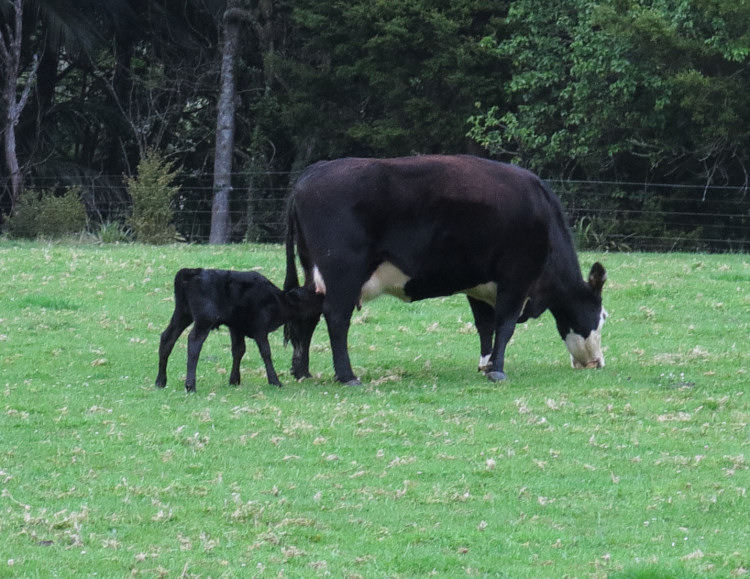 After he was born, this is how 746's calf got his first feed - probably including her fake teats half-way up the back of her udder.  Now he obviously thinks this is how you do it, because he's carried on feeding the same way. 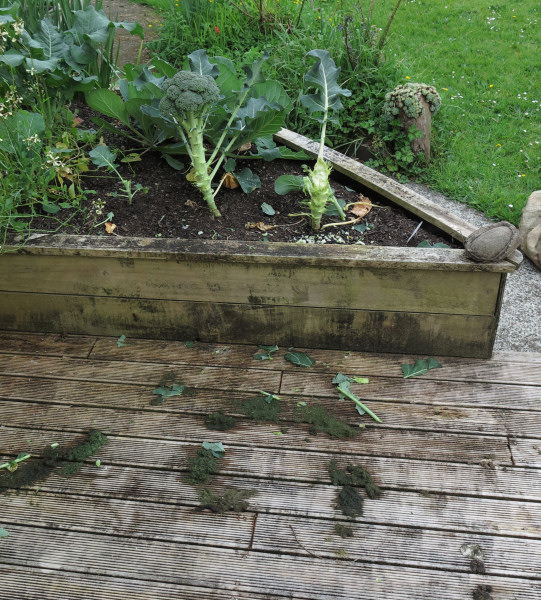 When you are a goose and have been on your "last warning" for months because you habitually leave huge piles of disgusting poo in unsociable places, the last thing you should do is eat the prize broccoli plants growing in the gardener's lovely garden and shit on the deck while you're doing it.

And so it was the last thing, almost, the goose did.  We have been pondering what to do about her for months.  She's been here since 2003, arriving when she was about 18 months old, from memory, so she's 18 or so already. I read they have a potential life-span of 24 years, so she could live for another few years yet and if she's going to live on the deck and do this, we'll have to move out.

A few months ago I put the word out that we were looking to rehome her but that she prefers sheep to geese, who she doesn't recognise as her own kind. (We've only kept our sheep for so long because of the goose, but she's rejected even their company of late.) She's not a very friendly bird.

We contrived a very peaceful end for her and she's now buried between Demelza and Dotty.

I will miss her beauty as a fine bird but not the mess and the noise. I do not feel entirely comfortable with it all but things could not continue as they were. 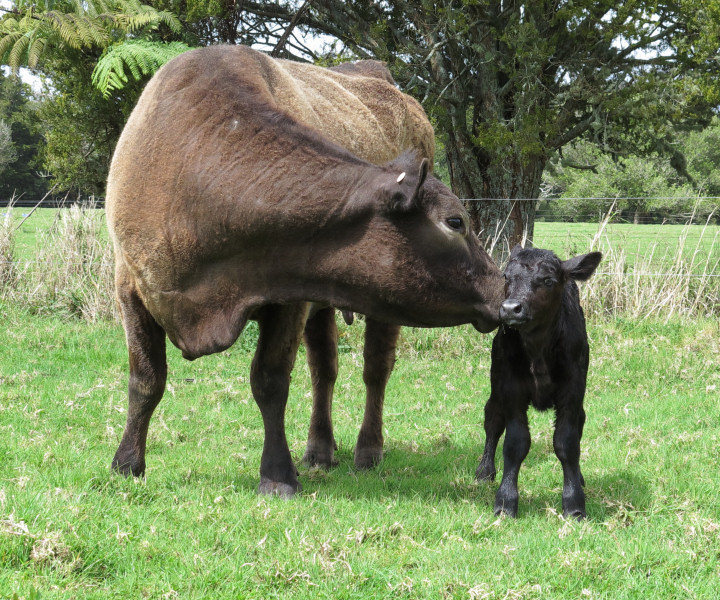 812 now loves her daughter very much. 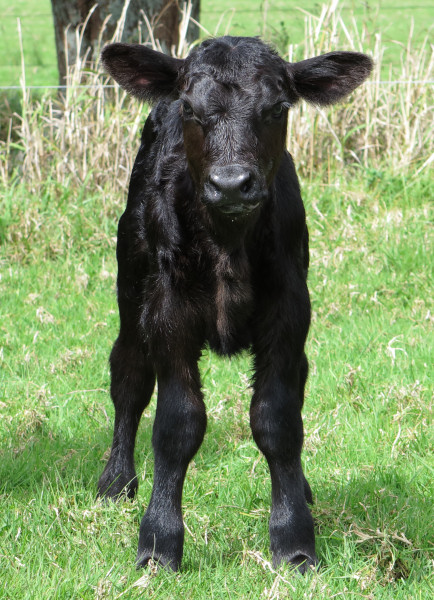 She's a pretty thing, with her off-centre hair whorl - not so much a whorl as a point. 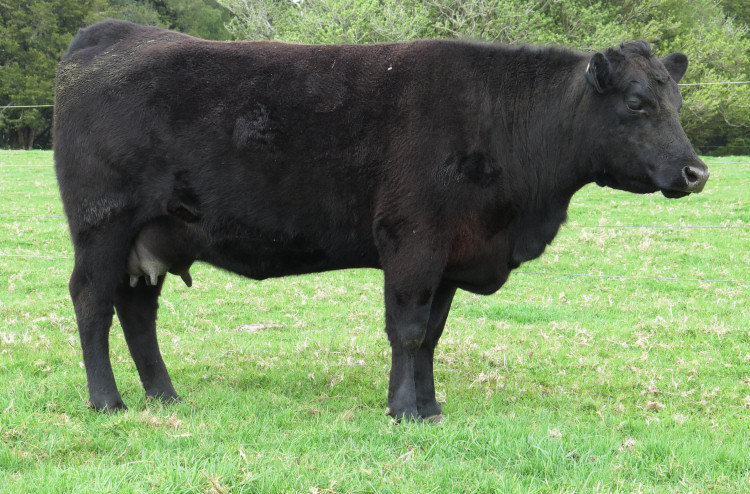 If you compare this picture with last week's, you might see that her tail head is a bit higher now. 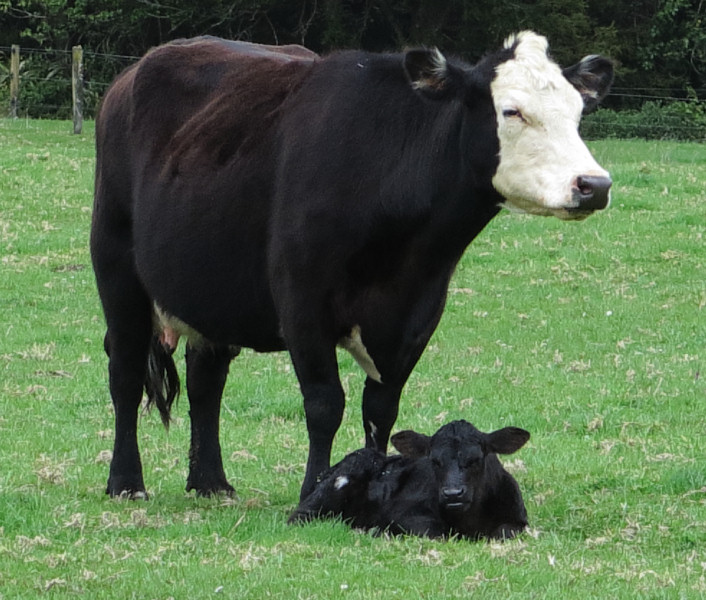 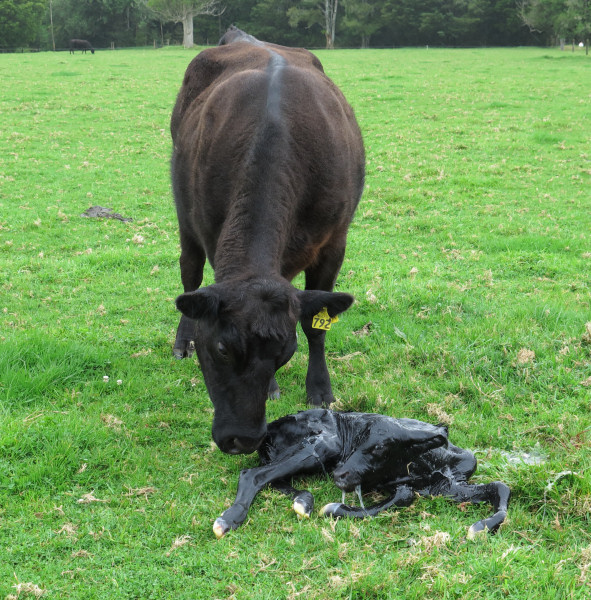 792 began obvious labour at about 2.30 this afternoon.

At 4-ish I was going around dishing out molasses and Magnesium and while I was engaged in calling 811 and a couple of others to the bottom end of this paddock so they'd be out of 792's way for a while, I turned to see the calf born with a squirt, so that she flipped out of her mother onto the ground.  She didn't appear to be moving, so I went very quickly back to check that all was well.

She was completely inert, so I checked her nose and mouth were clear and encouraged her into life. I suspect that when they're born very quickly and easily, they probably have sufficient oxygen in their cells not to need to wake up and breathe immediately but from my perspective, that makes them look like they're dead!

This is 792's third calf and first daughter. The sire is Jackpot; his calves are coming out nicely streamlined and small. 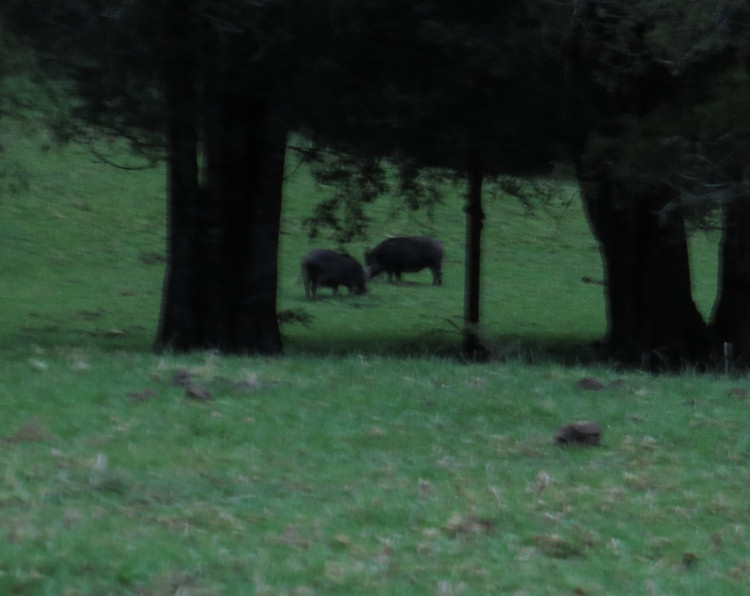 Bastards.  I chased these two and their two mates away tonight and Stephan says he'll come out with the cross-bow tomorrow evening. 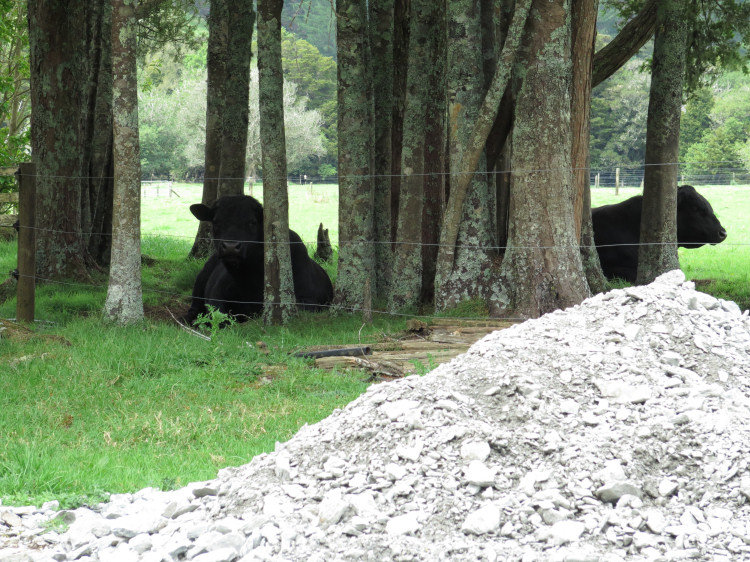 I want the bulls off the flats but I don't want chaos when I move them, so have been gradually shifting them in the direction I want them to go.  Looks like they might need a little more encouragement.

I set the gates for them to leave Flat 5d and go out along the lanes. 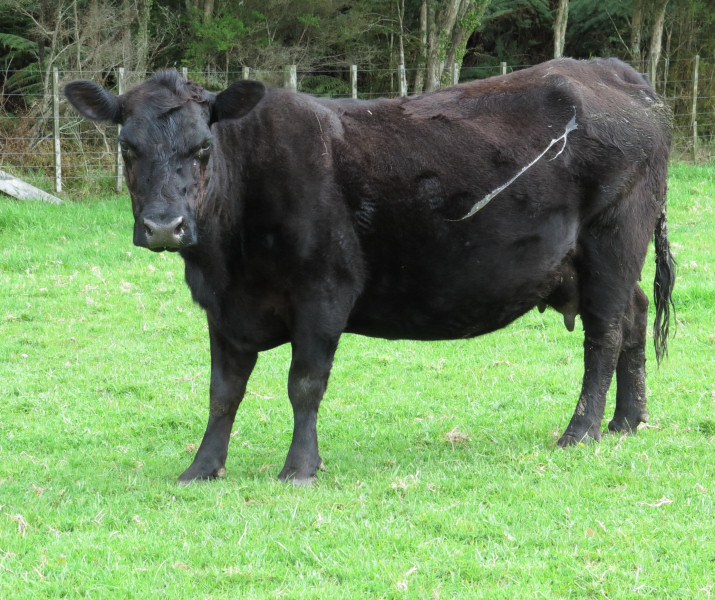 When I looked at this picture, I thought of an earlier one, when she was a yearling.

I was out wandering around administering ante-natal massage and grooming. 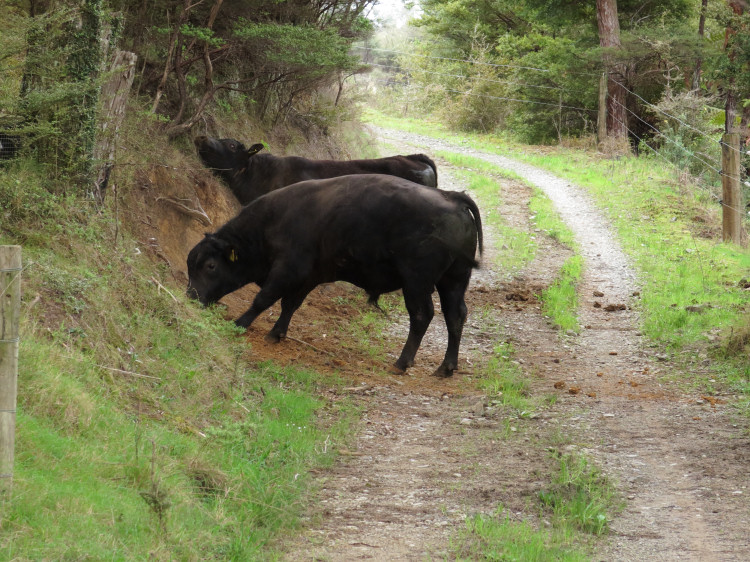 One of the bulls had left the paddock, so I encouraged the other go follow him and fortunately there was no fighting, just a bit of posing and threatening.

Predictably they spent some time rearranging the clay bank along the track on the way to the Blackberry paddock, around the corner and along on the right.