At midday our Prime Minister made an announcement, outlining a four-level alert system in response to the COVID-19 pandemic. We're at level 2 now, and all people over 70 are asked to self-isolate at home and everyone is to keep everyone else at a distance of at least a metre, to avoid breathing in airborne droplets that may carry the virus.

But today is the day of Nut's memorial up at Earth Spirit and as it will be a very small gathering, we went. Nut has been a friend for years and died late in December.

Ten of us gathered in a sparse manner, a tree was planted, some pictures were viewed on a large screen and there was a shared meal. We had to leave before everyone ate, having animals to attend to.

I feel very much like we're now living in some horrible science fiction story. 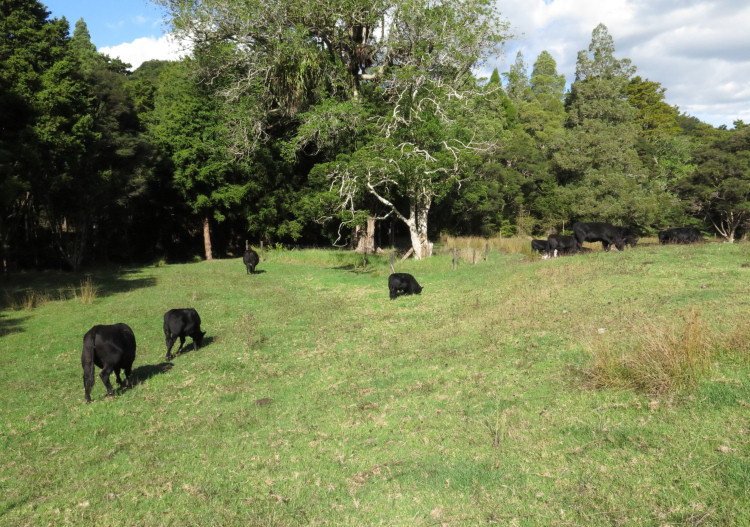 I let the 21 mob out of the small bit of the Swamp East Left in which I'd left them too long, across the stream to the Frog paddock. 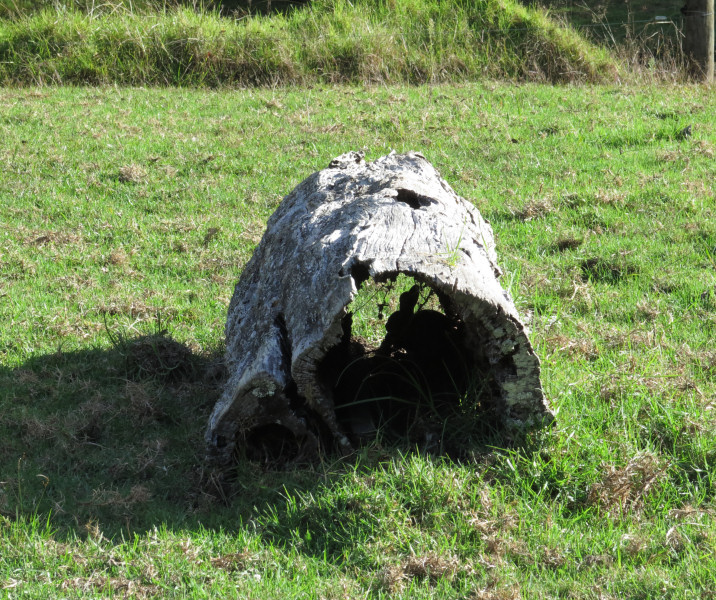 And the 26 mob, who had been in the whole of Big Back North and South, I let into the Bush Flat.

As I approached this log a tiny rabbit belted out and across the grass to another hiding place. But its sibling was still sitting quietly in the log, not moving at all. 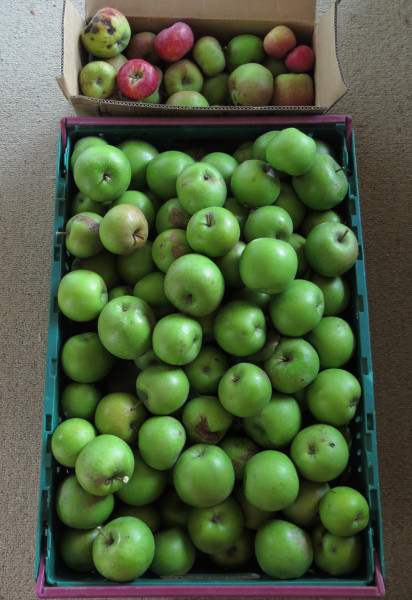 While I did all that, Stephan went up to the orchard and came back with all these lovely apples. I hadn't realised there was so much fruit there this year. 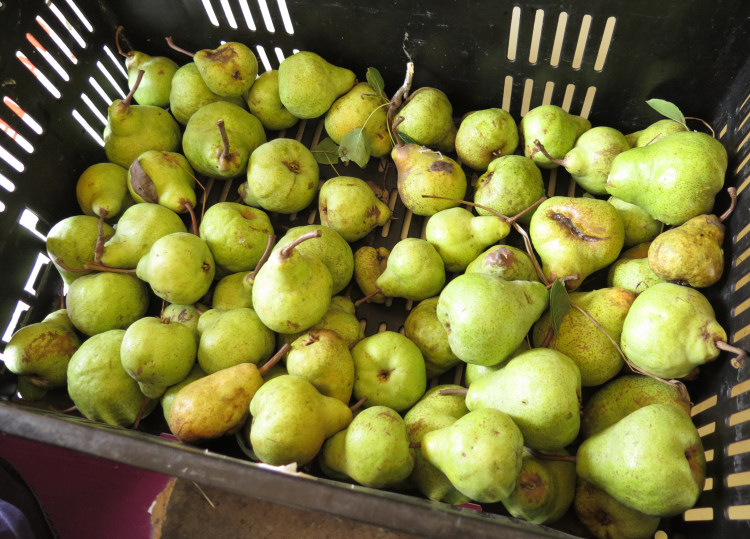 More fruit picking this morning, this time from the pear trees. 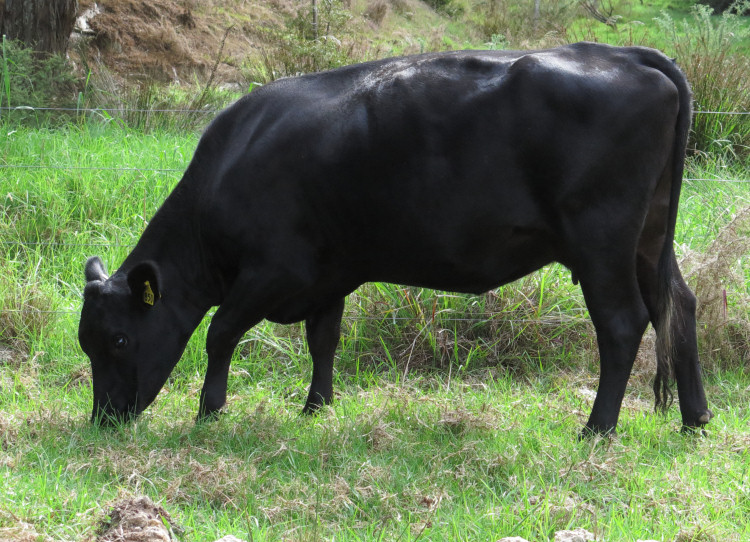 Zoom is suddenly melting away. I thought she was looking quite good ten days ago but today she looks terrible! She is the youngest mother in the 24 mob and obviously needs better feed than she's getting.

Three of the pregnant yearlings are in the same mob and now I'm feeling nervous for them too, although they're not doing the double job of growing themselves and feeding a calf. 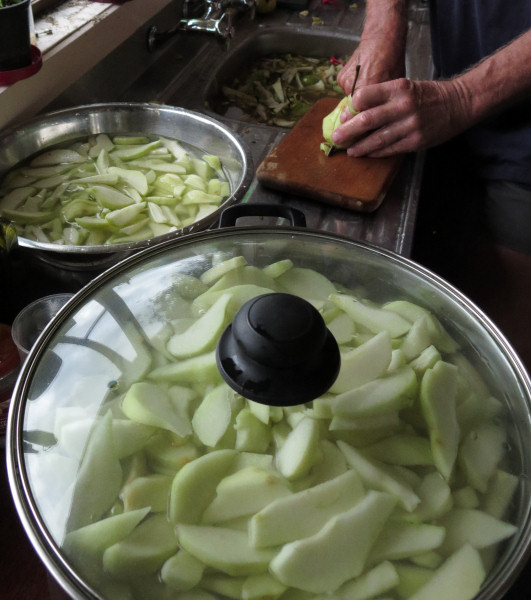 Stephan processed all the pears ready for bottling. They make a lovely dessert treat through the winter.

When I was a child I disliked pears - actually I disliked food in general and lived on scrambled eggs and Golden Soup (Potage crème d'or, from my mother's Cordon Bleu recipe collection). Primarily it was the strange textures of foods I couldn't bear to have in my mouth. But these days I enjoy the interesting flesh of pears, raw and cooked, along with their very pleasant flavour.

We had a little rain again this morning, 6mm in the gauge. 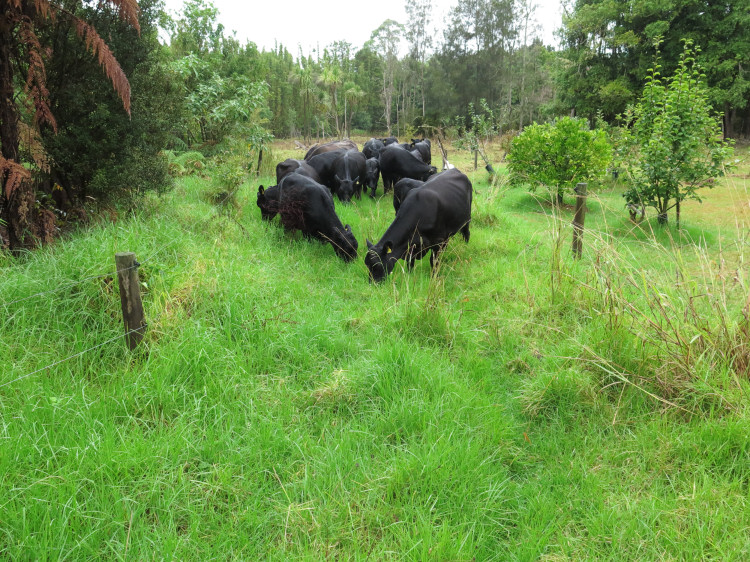 The 21 mob are on Jane's place, since some grass had grown there. This morning we led them along the connecting lane between one paddock and the other, listening with great pleasure to all their happy harvesting of great mouthsful of long grass.

That's one of the best sounds in the world, I think: a happy cow eating nice grass.

Today's prime ministerial announcement moved us up to Alert Level 3, the schools are about to close, everyone has to stop going places, and at midnight on Wednesday we go to level 4. I am relieved. With the talk of tourists who refused to isolate themselves and the probability of community spread as obviously happened everywhere else, if anything this move is a little late. Still, it's faster than some countries where things are starting to look dreadful. 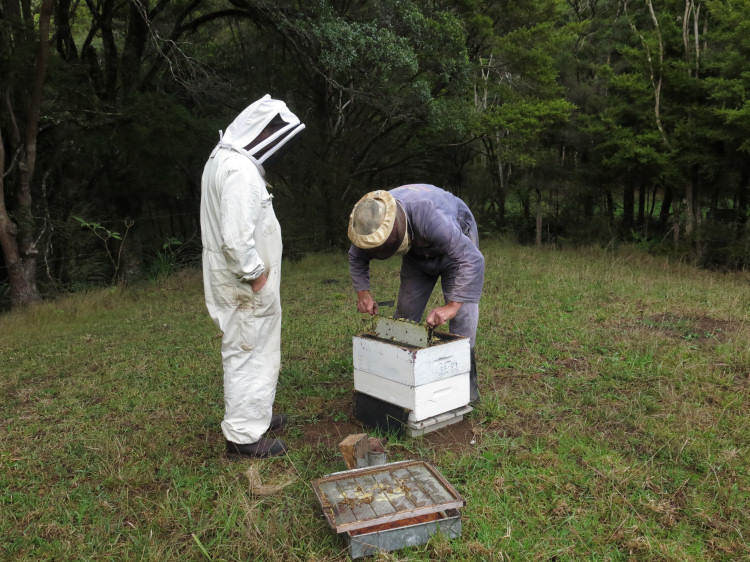 Jonny came round to pick up his trailer, Stephan having borrowed it the other day to carry the pine logs, and also brought his gear to conduct a bee-maintenance tutorial for Stephan.

They were inevitably a bit close to each other during the bee work but Jonny travelled out and back on the back of the ute while Stephan drove. Neither wanted to risk the other's health by travelling together in the cab.

I travelled independently, not wanting to be near anyone! 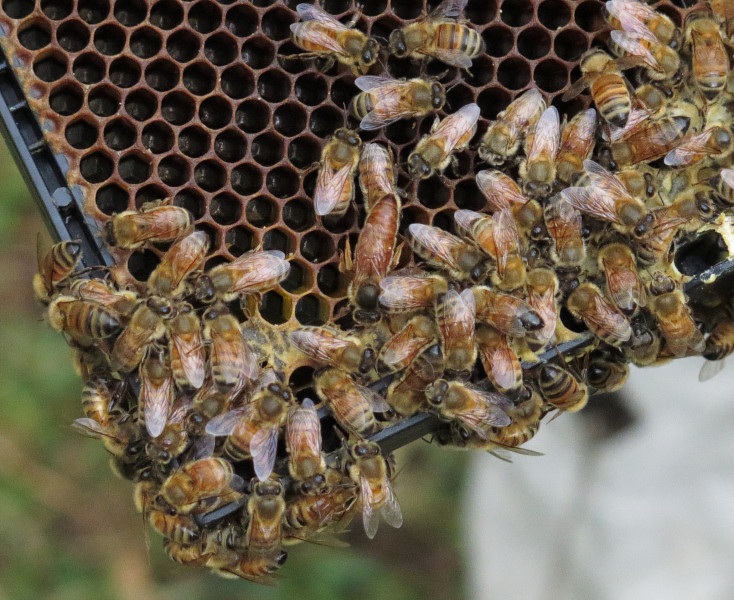 I've never seen a Queen bee but here she is in the middle of the picture, with the long brown abdomen.

Roz had given Stephan some spare Varroa Mite control strips and Jonny showed Stephan how to put them into the hive, to set the bees up for autumn and winter. 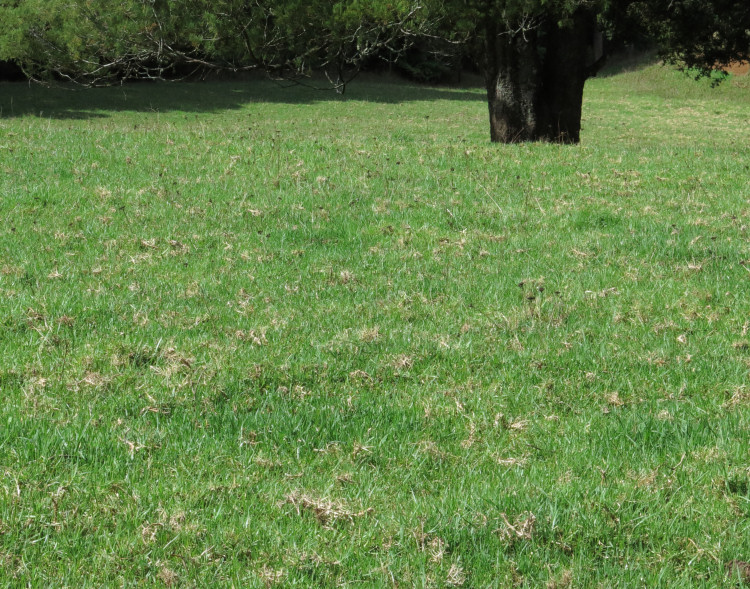 The grass is growing! It hasn't had enough water to really spring out of the ground but there's definite improvement in the colour of all the paddocks. 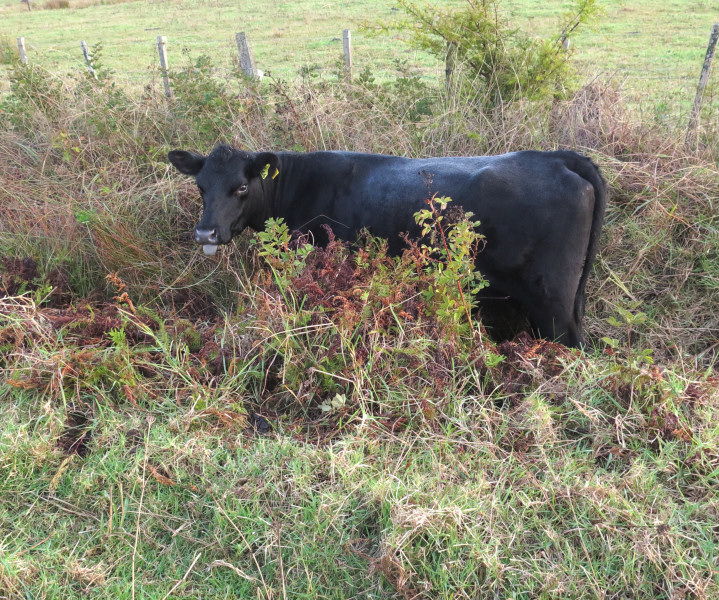 Fancy 166 in the drain adjacent to the Windmill paddock lane.

Our Level 5 Te Reo course has, along with everything else, stopped. That we don't have to make a decision about whether to risk going or not is definitely helpful but I am sorry we have been interrupted. Hopefully some on-line classes will be set up at some stage. Everyone else is no doubt as distracted by this unusual way of the world as we are. 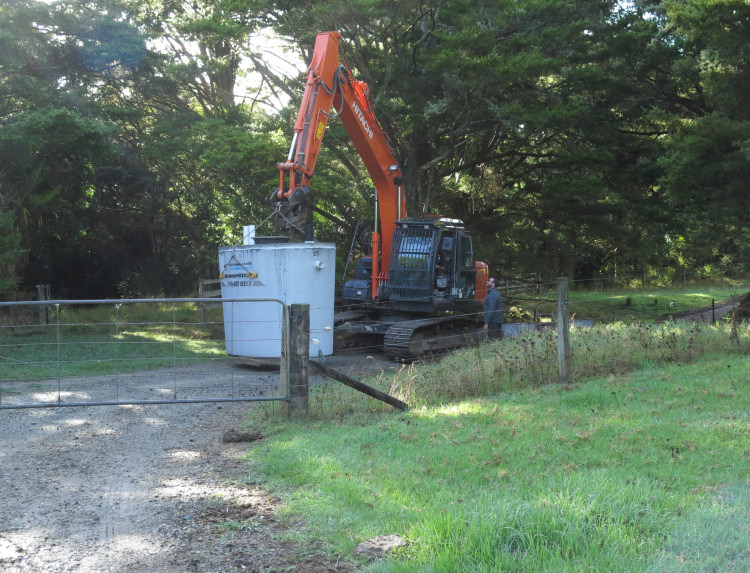 Neighbour Jane's septic tank collapsed some weeks ago and she's had to wait a long time for an available plumber and associated people to have it replaced and now they've arrived. Unless they're considered essential service providers, they'll have to get it all fixed up today.

At the end of the day when all the machinery had gone, we discovered the mess they'd made of the precious bits of grass out alongside the driveway to the road gate. I'm thoroughly peeved. Jane has right of way but as far as I'm concerned nobody has right to destroy grassy areas in a drought, let alone leave great lumps of churned up soil in areas I had no idea they were going to venture into! 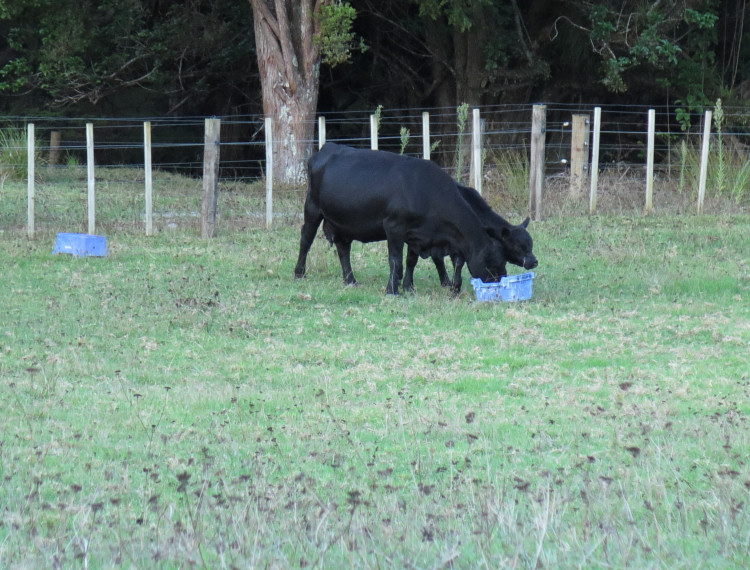 After they'd both had their treats this evening I watched Eva and Andrew having a tussle over who was going to lick the last bits of molasses out of her bin. Andrew is getting quite assertive with his dear old mother but Eva was holding her own.

From midnight we're in "lock-down", everyone to stay home in their own bubble, as Prime Minister Jacinda Ardern described it.

As a natural recluse I feel much more part of the community, now that my behaviour is the norm. Previously everyone thought I was odd; now they're all doing it. 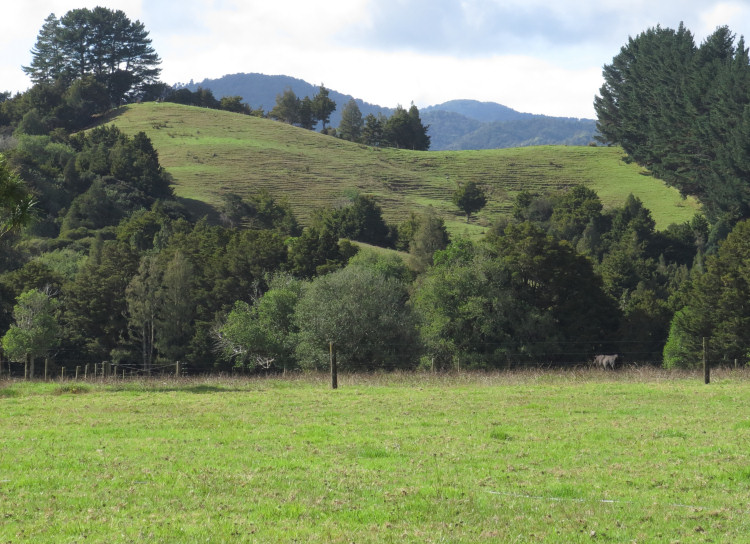 There's a lovely green tinge across a lot of the hill Over the Road.

All through the dry weeks there have been only two patches of slowly-recovering green and everywhere else had gone brown. 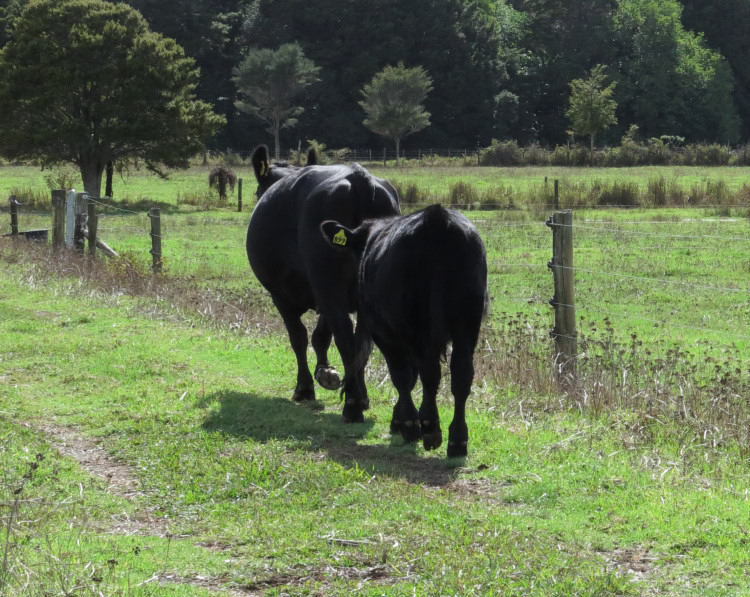 Stephan came and helped me draft Zoom and her calf out of the 24 mob.

I took them along the lane and put them in with the 21 mob, where the other two-year-old heifer mothers are. 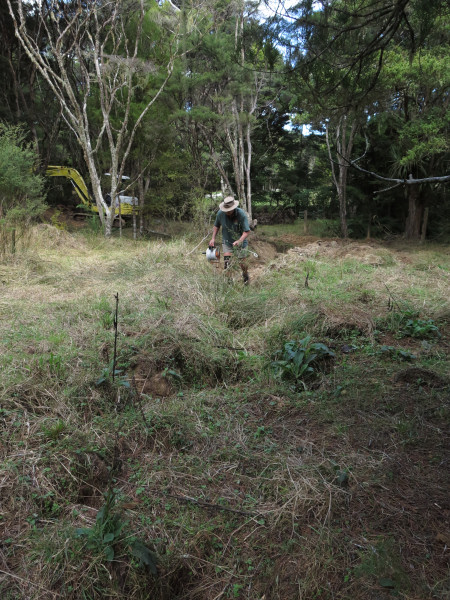 Then I went out with him to the Swamp East Left to do some planning.

Stephan initially formed this drain with the tractor and front-end-loader bucket, to try and stop water from the base of the big gully flowing out through the soil on the flatter ground. That water had caused this whole area to be boggy and difficult to manage.

Now there's a digger on the job, he can tidy things up, in preparation for a fence on either side of the drain, to stop the cattle messing it up and sending silt into the stream whenever it rains. (Assuming it ever rains again.)

Since Stephan cut down one of the Pine trees in the Pines paddock, I don't really want to put my pregnant cows in there. I don't think there's too much risk to their pregnancies from Pine foliage but in a drought when they might eat more of anything they can get than usual, I won't risk it. I drafted the seven non-pregnant animals, six heifers and the one steer, out of the 21 mob and put them in the Pines paddock where there is some nice grass in places. 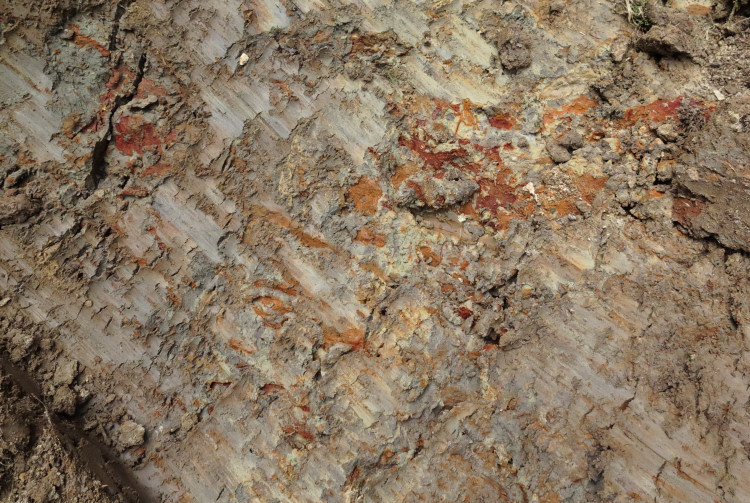 The clay at the base of the hill has many interesting colours.

When my parents built their house in Heretaunga Crescent near Cable Bay on the east coast (in 1973), Jill found the clay colours equally fascinating and matched her house-painting palette to the colours she found in the excavated building site. There there were purples and greens and volcanic lumps that when broken apart revealed even more colour variety. 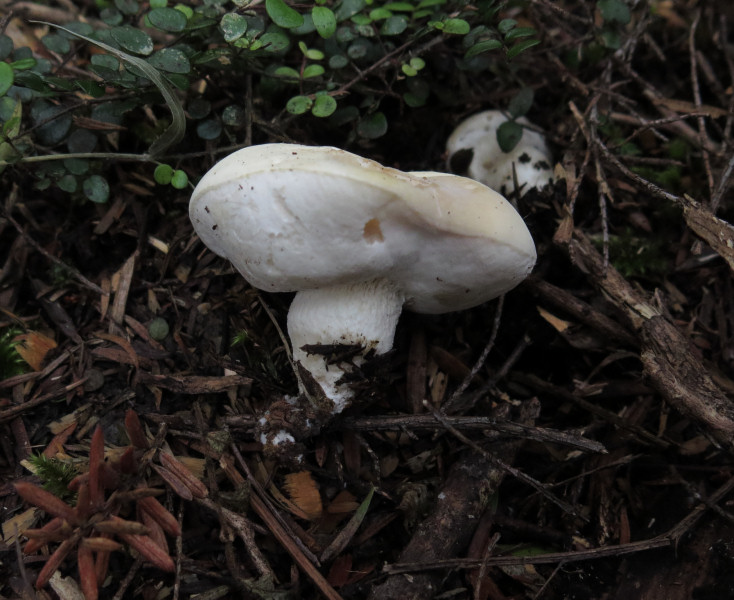 At the base of many of the trees on the slope were bright white fungi. I gently kicked one over to see what it was like underneath. 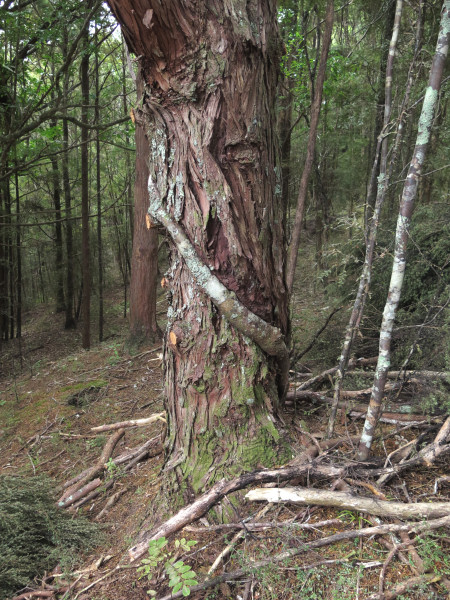 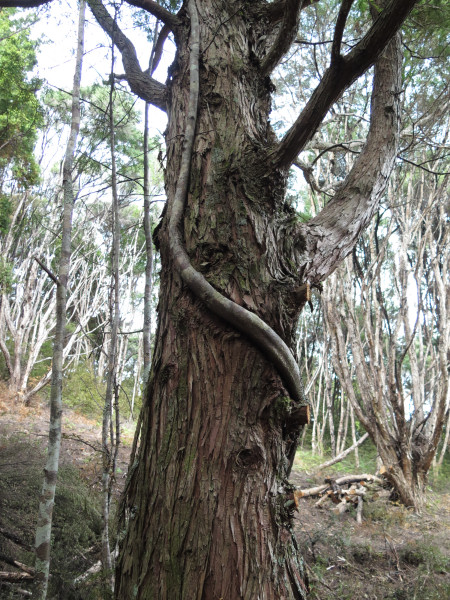 Goodness knows why that Kahikatea sapling chose such an intimate association with the older Totara. Presumably it was seeking light, having germinated too close to the existing tree. 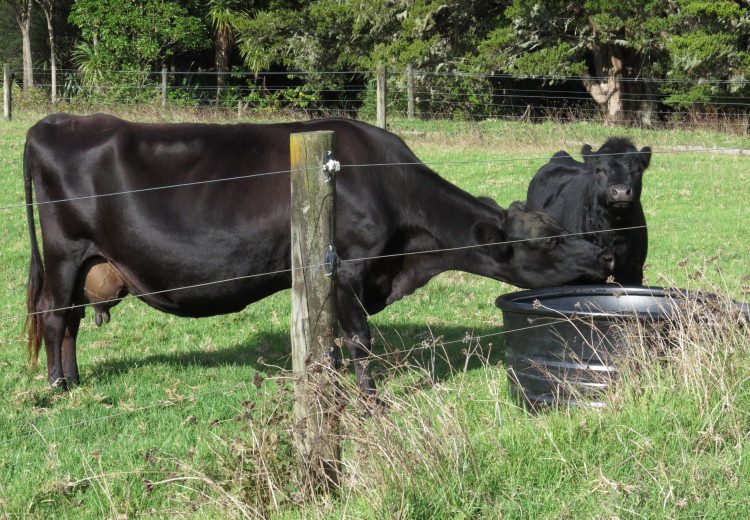 Zella seems a careless mother at times but sometimes she pays affectionate attention to her daughter. 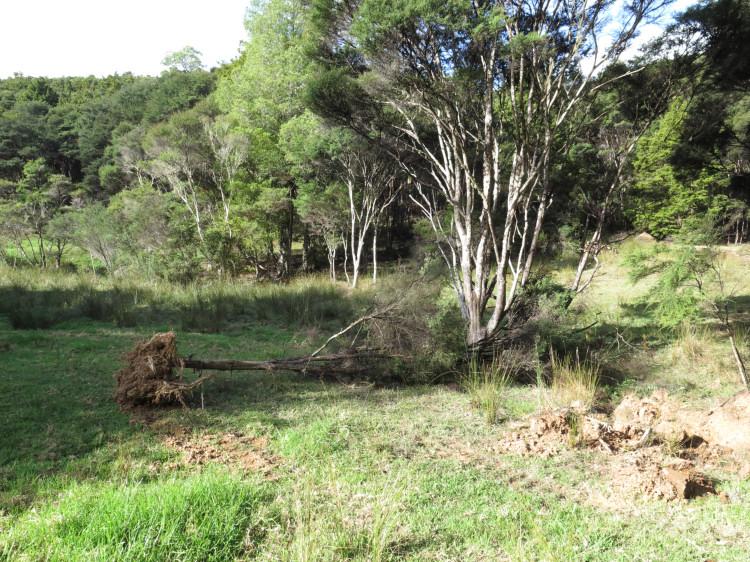 Most of the time Stephan cuts down trees, sometimes he simply pulls them out of the ground. He's very strong. 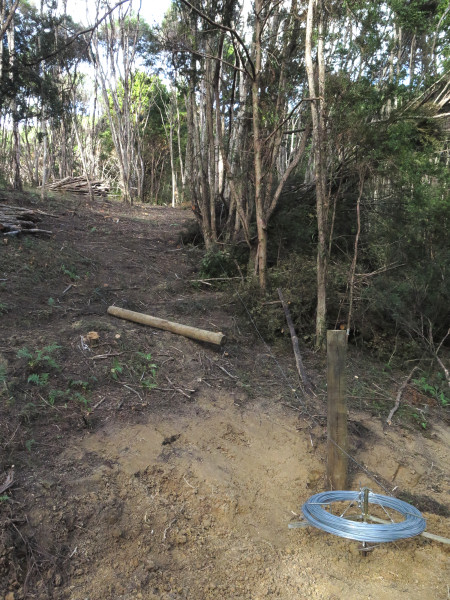 To the right is the short gully that comes down to the oft-failed culvert. The gully will be fenced and will form part of the boundary between the two parts of the Swamp East. This is great fun! 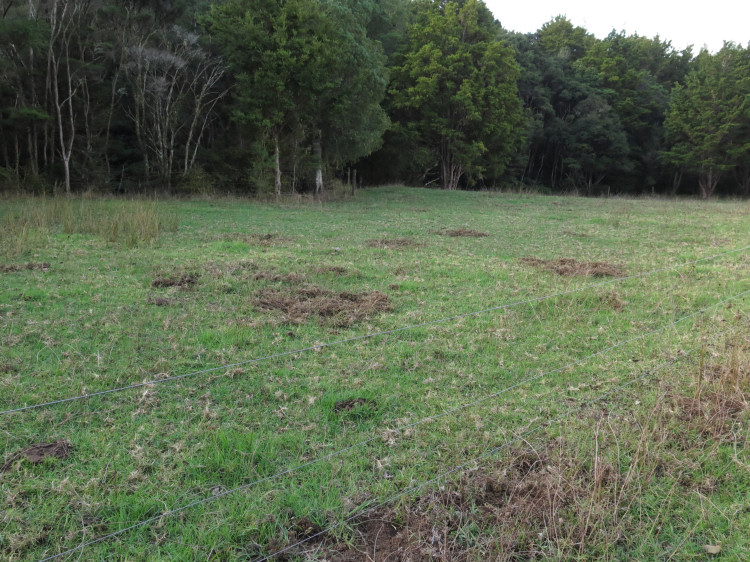 Damned feral pigs; we don't have enough grass for them to be wrecking the bits that are growing.

This is extremely frustrating. They're not going near the trap and when I come out to look for them, I don't see any to shoot.

The pigs used to come out of the bush at about twenty past six each evening (7·20 during daylight saving) but this group has different habits.