The second part of the week beginning the 3rd of October 2020.
Tuesday the 6th 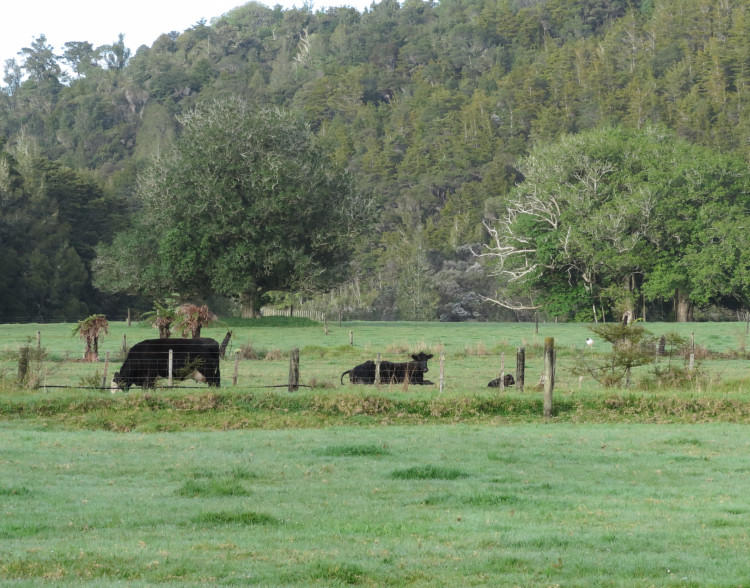 At 4.35 this morning all was calm. At 6.50 I noticed 745 walking around with her tail slightly out. There's a particular walk when a cow is in labour, and a sense of urgency and distraction.

By eight o-clock she was getting on with the job and there was some bloody mucous, something that always alarms me a little but I know, from past observations, that it is quite normal, just not as common as there not being blood at this stage. 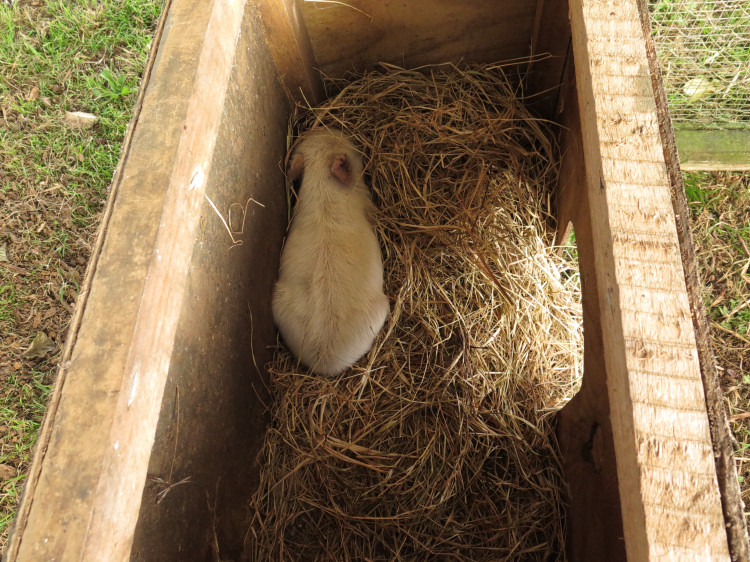 While I waited for 745 I did the other jobs, like feeding little pig.

Once he figured out what I was trying to do to him, he gobbled down anything I fed him on a spoon. I'm still being careful about how much he gets because I suspect I could easily upset his digestion by overwhelming him with an abundance of food. I think he's quite young and has probably been primarily reliant on his mother's milk, until her death. 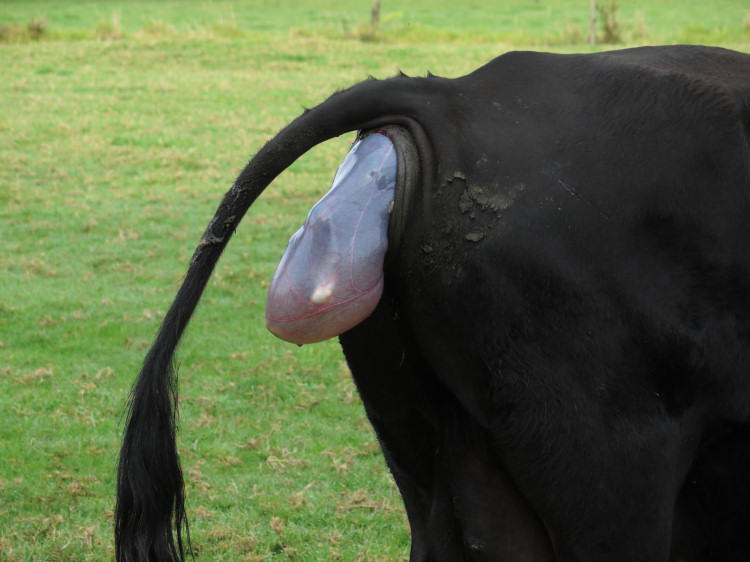 At 8.30 745 had pushed out a bag of fluid that then burst and now here was the calf in its membrane bag. I'm always a bit concerned when the calf's head is out and still covered in the membranes, so I stepped in and poked a hole in the bag with the nib of my pen, releasing a thick stream of amniotic fluid. 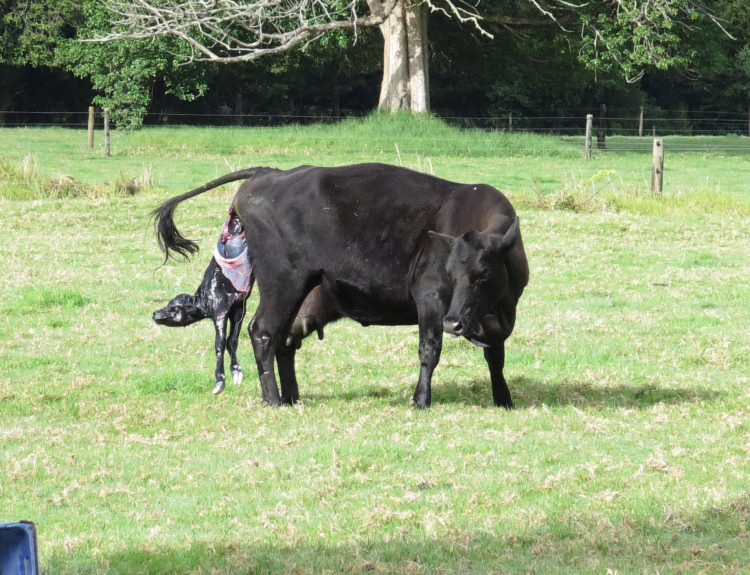 The calf was born at 9.03am, a tiny heifer - her gestation period has been 271 days, which is about as short as possible for a normal pregnancy. 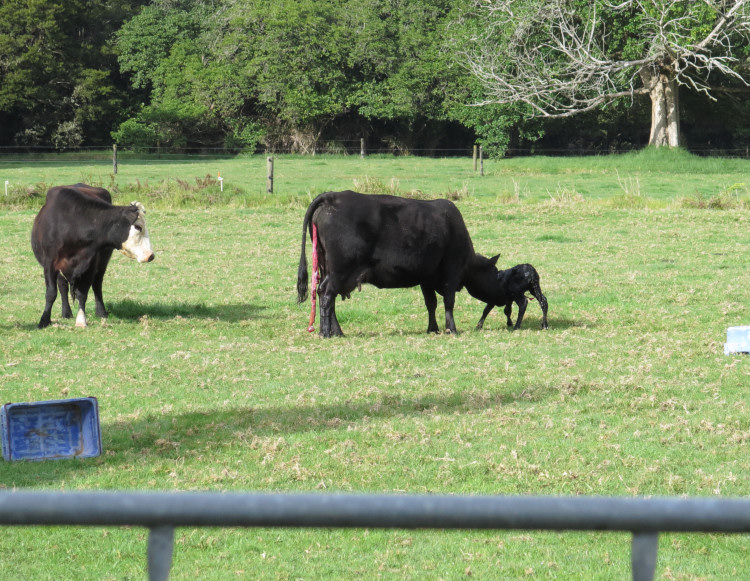 In six minutes she was on her feet!

When this calf was still inside her mother, she was exceptionally lively and it would seem that has continued. I haven't seen a calf get up this quickly in several years. Within the next few minutes she was beginning some tentative skips around her mother. 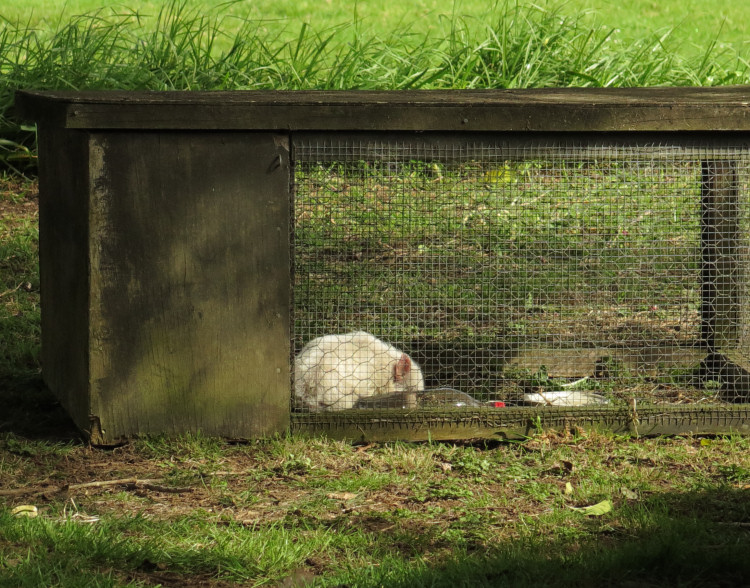 Little piglet looked like he was shivering, so I got a drink bottle of warm water to see if he'd like to lie against it. He didn't just lie with it but over it.

I decided he'd better come inside, so Stephan went and found the smaller chicken-hatching cage, brought it down from the shed, cleaned it up and piglet moved into the living room, with more nice hay to snuggle into but a warmer air temperature. 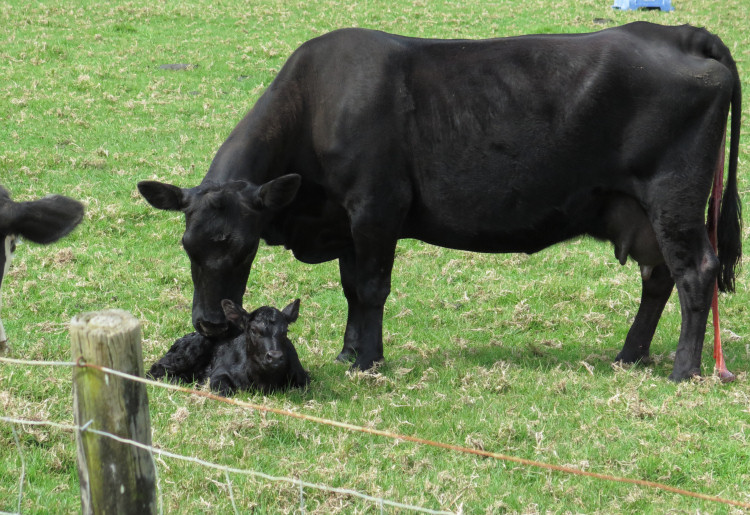 Little calf finally sat down for a rest after feeding. What a great calf! She's very cute to look at, extremely fine-boned and small. 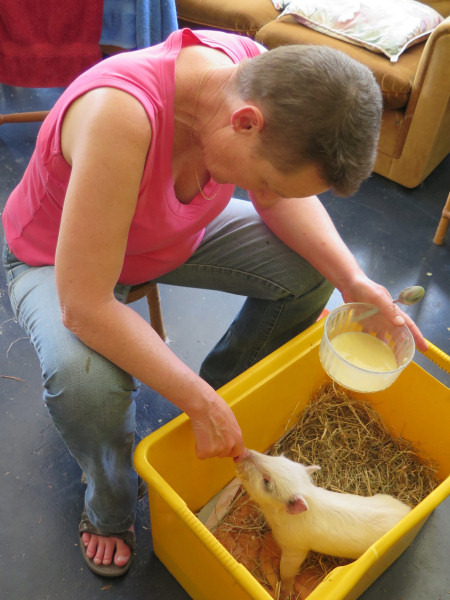 In town late this morning we went to the vet and purchased the correct dose of an injectable anthelmintic which will also see to the piglet's enormous population of lice.

After giving it to him, I carried on catching the lice as they moved up and down his hair, from one feeding point to another. I dropped them into a small jar of methylated spirits and had about a level teaspoonful of them by the time I was finished. Horrible things. I took a picture of some on a dead piglet in 2010.

I also fed him again, as I've been doing every couple of hours. 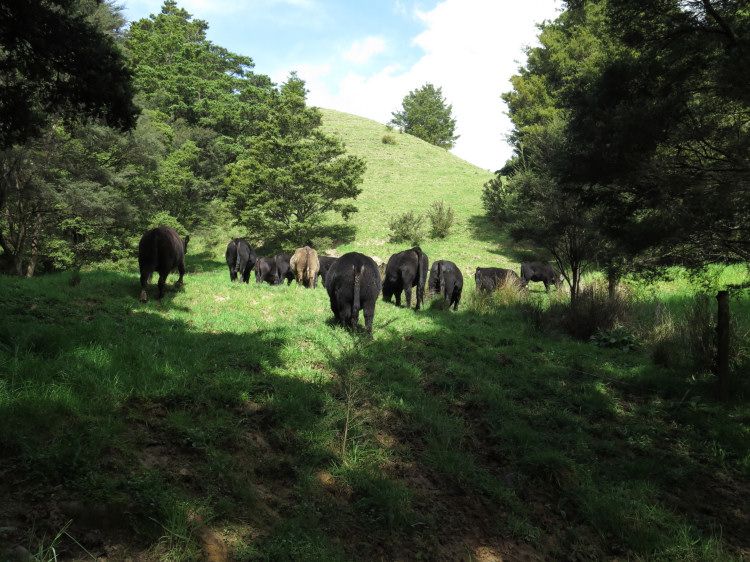 I must not forget my other mob of cattle, those who are not pregnant! I moved them this afternoon from the large part of Over the Road to the smaller corner part again, it having had a rest for a while. The grass is growing well. 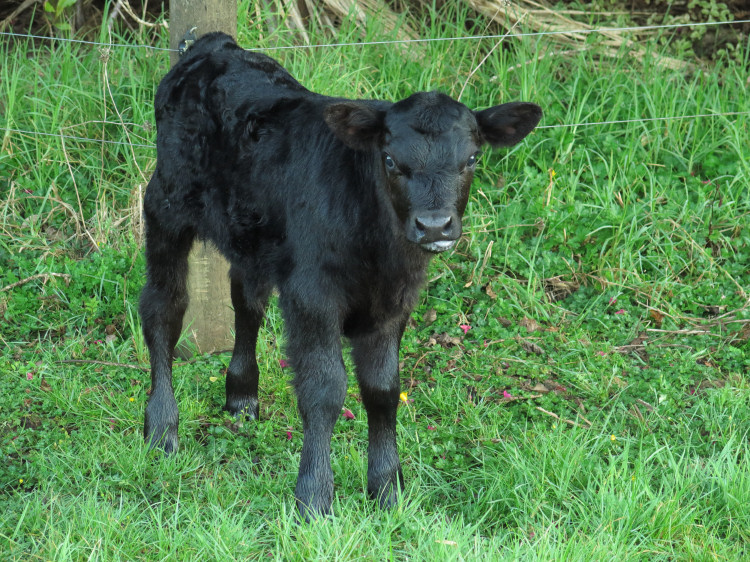 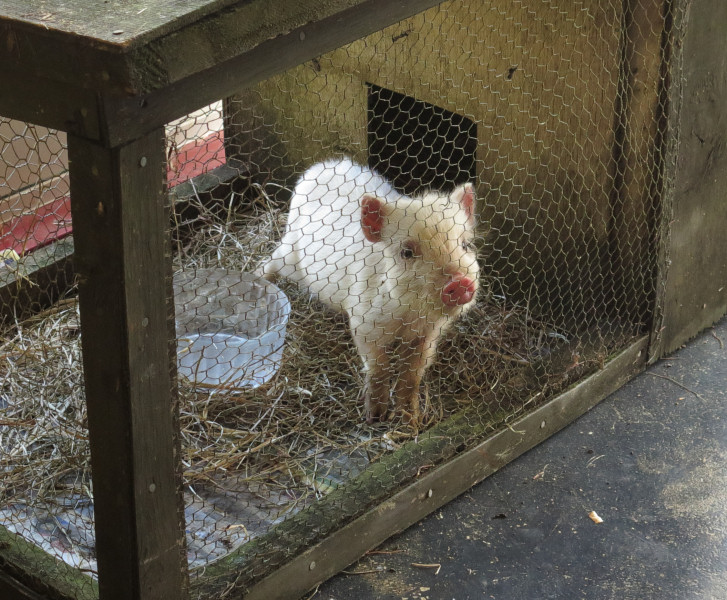 Little pig is getting quieter and more settled. The injection worked very quickly, lots of dead lice now falling out of his coat. What a relief that must be. And having food and warmth will be making him much happier too. 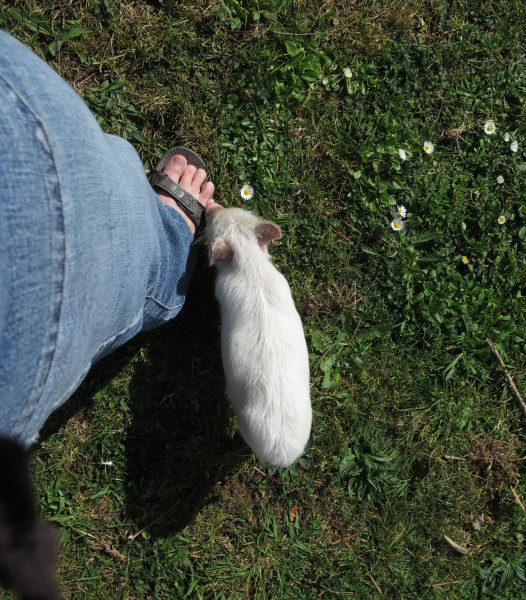 I let him out to run around with me as I prepared the outside cage for him for the day. He trotted along wherever I went. 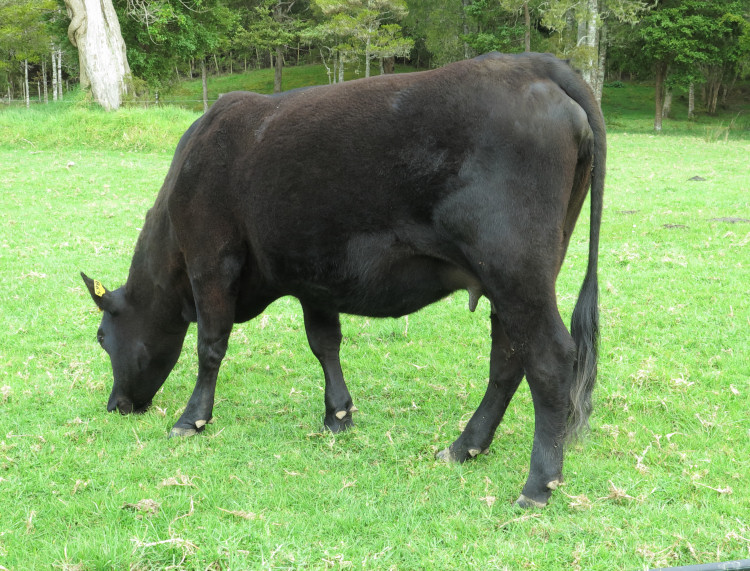 745's two-year-old daughter 865 is due soon, so I drafted her and thin cow 723 out of the pregnant heifer mob in Mushroom 2, into the neighbouring paddock for the night.

Out the back in the cow mob there is some significant udder change evident in a few of the cows so I'll need to draft some of those animals out and bring them forward tomorrow. 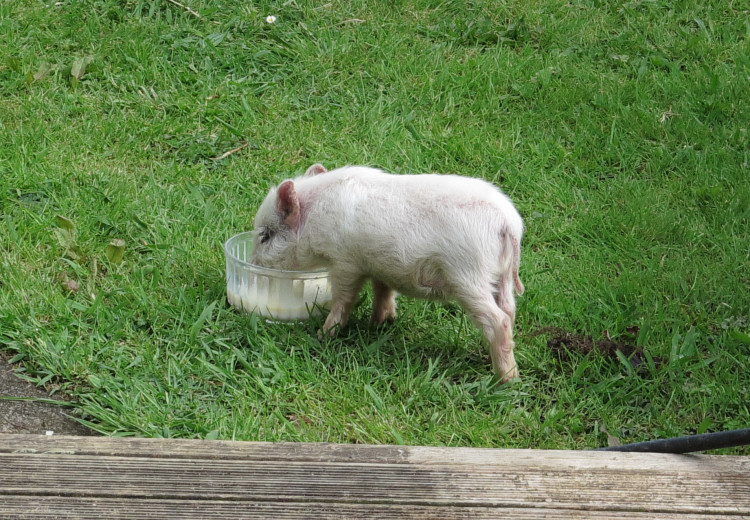 Little pig, eating normally now from a dish, watered-down colostrum from last year's frozen emergency supply (it'll only be days until we have a fresh lot from Zella) mixed with an egg and rolled oats.

For some reason I've always favoured ridiculously long formal names for small animals and Alabaster came to mind for a white animal - it's odd that he's white but there is apparently a big wild white boar further up the valley, so perhaps he sired this piglet.

Piglet is hereby named Algernon Alan Baster, or Al A Baster for short and he says "you can call me Al".

Now try and get that tune out of your head! 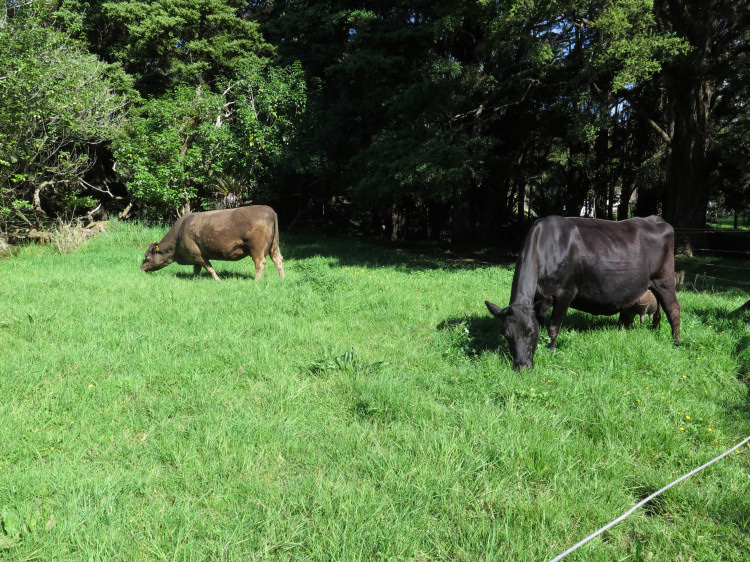 Glia and Zella in the bottom of the Pig paddock where there's some wonderfully lush grass. 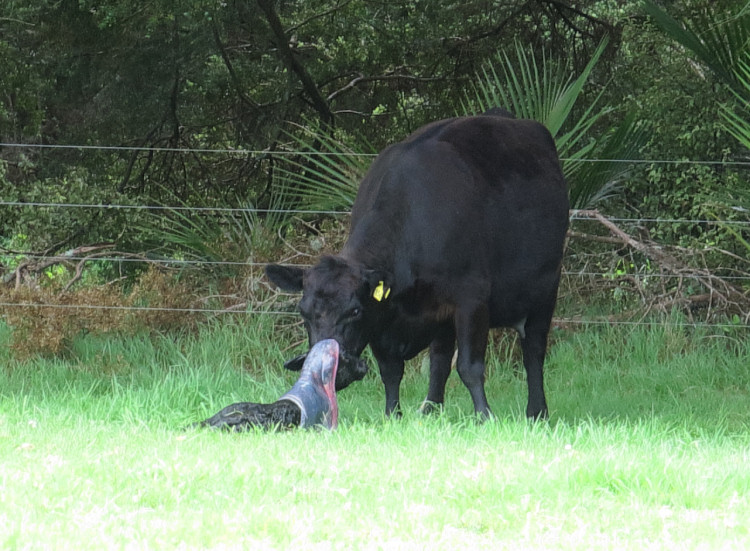 Three-year-old first-time mother 856 was swishing her tail irritatedly at 8.40 this morning. At 11.05 she was standing hunched, with her tail held out. At 12.45 after lying down and getting up several times she produced a bag of dark fluid. At 12.59 I could see two feet and eight minutes later she delivered her first calf on day 283 of his gestation.

So much for my worries. She then very calmly got on with cleaning him off and by half past one he was up and looking for his first feed. 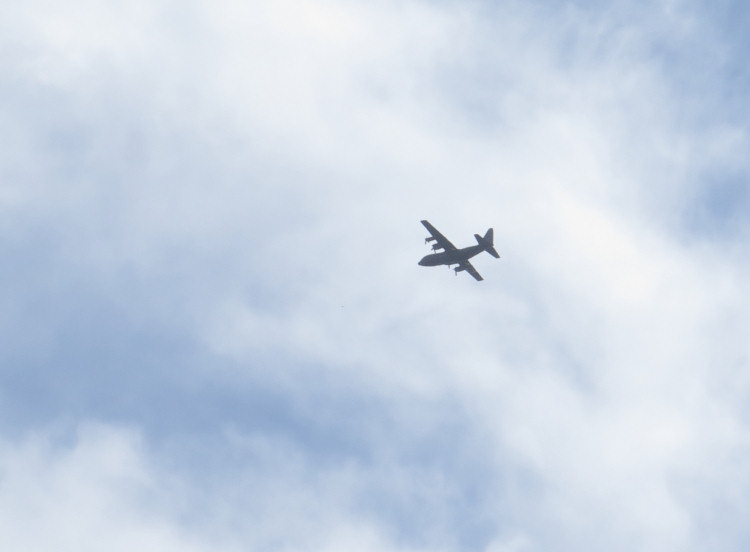 Dishing out molasses to some of the cows this afternoon I heard a roar as this great plane came low over the hills from the North: one of the Air Force's Hercules.

While writing this page I looked up what the Hercules was doing today (not expecting to find anything, but you never know) and discovered a news report of the repatriation of a group of students, leaving on the 7th, "to Timor-Leste after they were stranded in New Zealand by the Covid-19 pandemic".

This may have been that plane on its way home. 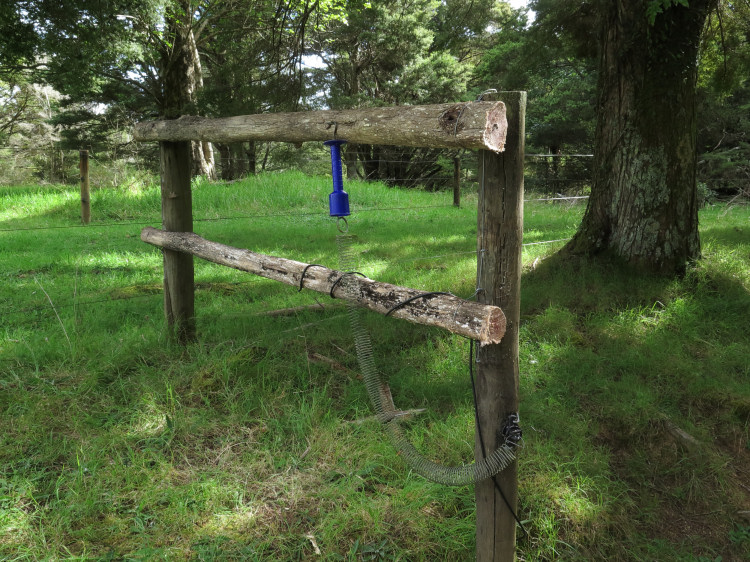 When I last saw these rails they were rotten and broken and provided no barrier at all to a determined animal's passage. Now they are renewed! 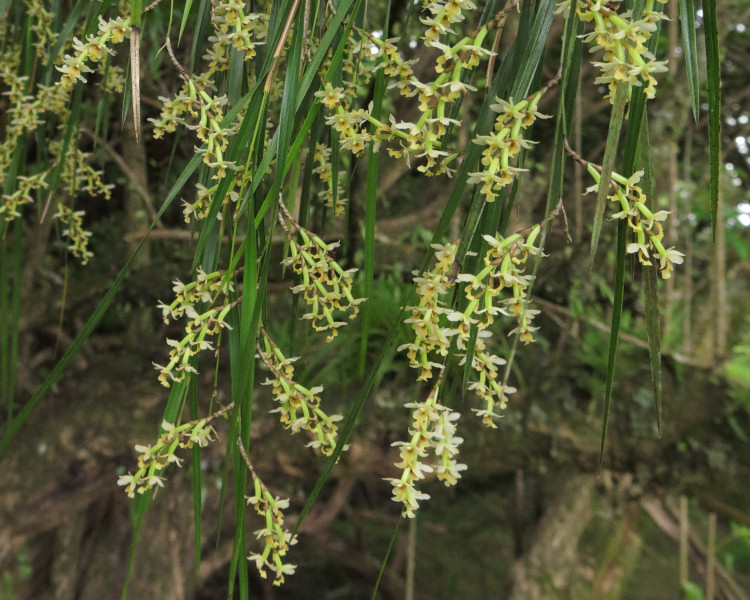 The little orchids are all out, being blown around in the stiff breeze. 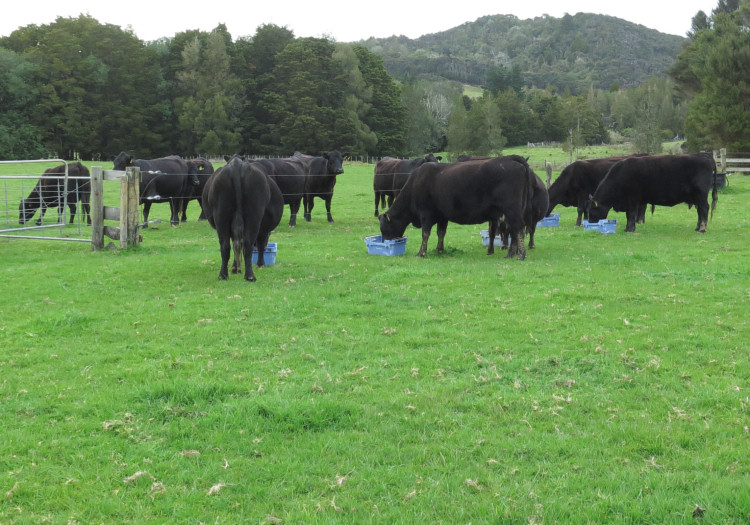 The cows who know about molasses are always enthusiastic about it when I dish it out for the first time each spring.

In Flat 4 the later-calving heifer-mob members were trying to work out how to get some molasses as well. I put 792's bin through the gate and then watched who got it: eldest cow 775. She didn't even have to shove anyone to get it, the younger cows and heifers all knew she was top cow in their group. 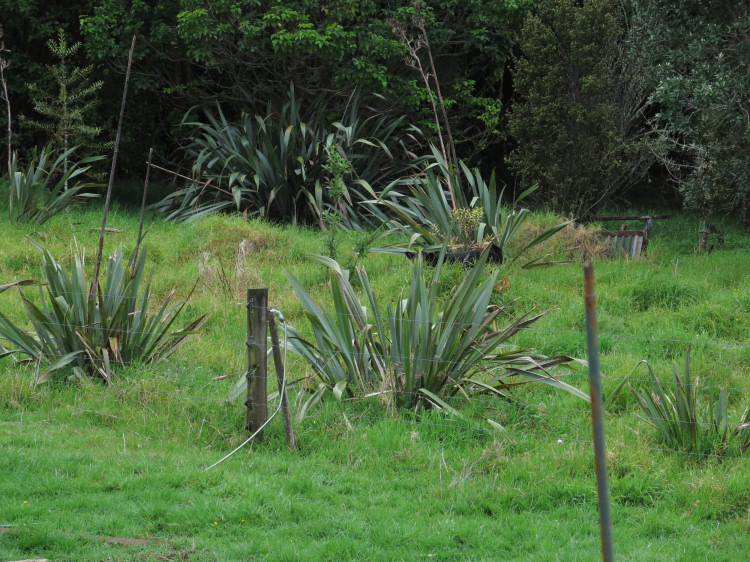 Yesterday afternoon I spent an hour looking for 812's calf. This morning Stephan watched her going into our garden tree reserve and there she is in the middle of the photo, about to snuggle down and disappear in the long grass. She must have been there yesterday.

At 3pm she came out for a feed. 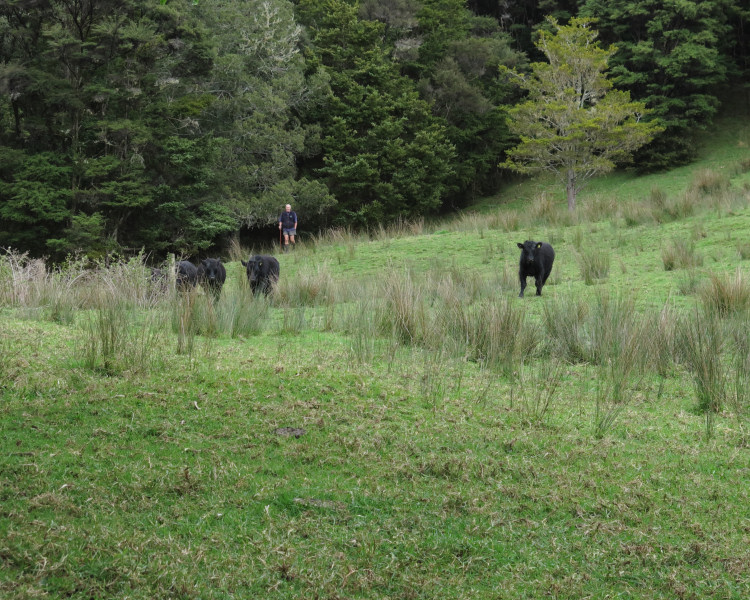 There wasn't much left for the bulls to eat in the Tank paddock so I decided we'd bring them out and give them a copper shot on their way to somewhere else. 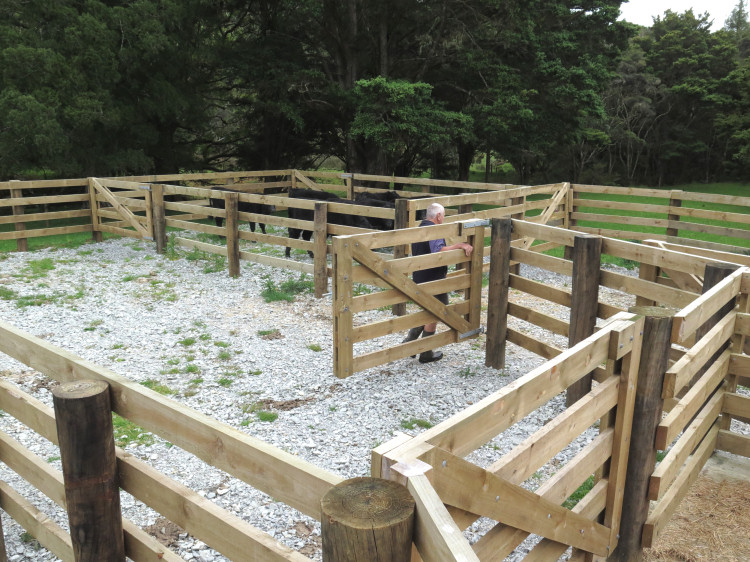 They went into the yards very easily and then fairly easily up the race, where I went down the line jabbing them in the neck, then quietly let them out through the crush.

The bulls have each gained an average 17.4kg in 17 days.
I look forward to measuring how much difference this copper injection may make to their growth and general condition. 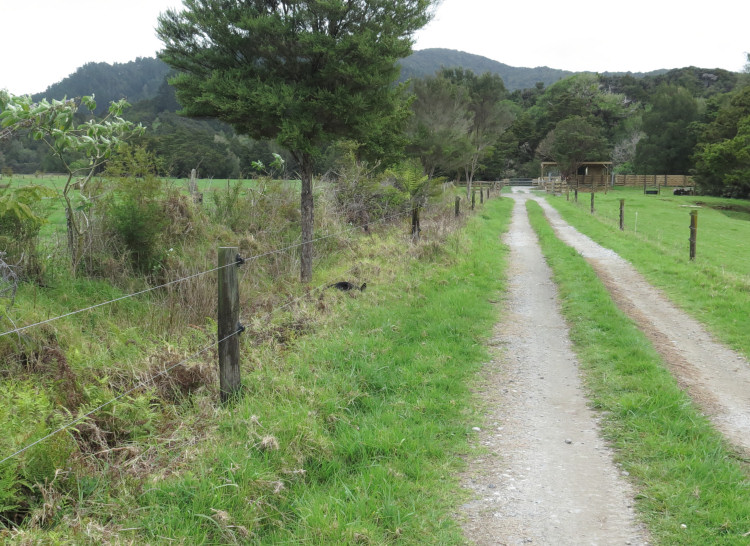 Travelling along the House paddock lane is a necessarily slow trip, always looking out for the calf who is currently in his "sleeping-in" phase in the long grass by the drain, in case he gets a fright and dashes out across the road-way. 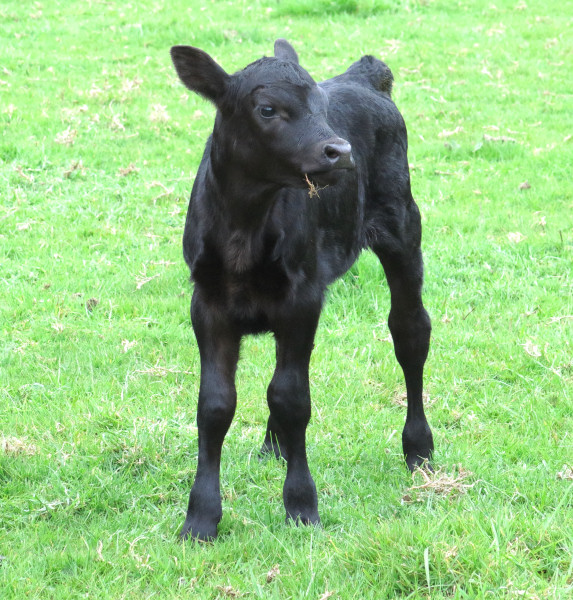