I went to the airport this afternoon to collect Russell Priest, who had flown up from Feilding to attend our Women in Agribusiness fieldday tomorrow.  Our accommodations are much improved since his visit last year and Stephan prepared a scrumptious meal from the last spit-roasted joint of the lamb we didn't eat at the party in January.

What an utterly perfect day for a fieldday!  The sky was clear and there was just enough breeze to keep the temperature comfortable.  Twenty-five women attended, spending the morning listening to Russell's presentation on cattle genetics and the use of EBVs (Estimated Breeding Values) in selecting breeding stock.

For most people EBVs are of potential use in a couple of ways: if you're looking to buy a pedigree bull from a stud breeder, or semen for AI, the bulls should have EBVs available and that gives you a lot more information than that available from just looking at the animals in front of you; at some weaner fairs there is sire information available for the calves, stating where the sires' EBVs for growth (for example) fit into the rankings for their whole breed.  That means you can gauge the potential value of one pen of calves when compared to another with the same information provided, or animals which have been bred from goodness-knows-what and where no information is provided at all.

NZ Performance Beef Breeders Ltd lists a number of NZ cattle breeds which are associated with the group, by which links you may get to the breed society websites and their "Internet Solutions" where you will find the breed's EBVs.

The most recent change to the EBV system involves the inclusion of indexes, by which animals may be ranked according to their profitability within a farming system.  Hereford and Angus currently have indexes for three and two different systems respectively.  The Angus ones are a Self Replacing index (i.e. where you're using a bull to breed heifers to become breeding cows within your herd) and a Calving Ease index, particularly aimed at the dairy industry, to enable selection of the best bulls for use over heifers and for creation of better quality calves to go into the dairy-beef markets.  The indexes work a bit like the dairy Breeding Worth index, apparently, giving one calculated figure for consideration, rather than the great range of individual EBVs for all the traits measured. 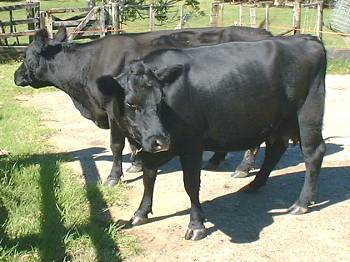 In the afternoon we lined up some cows and had a look at them with reference to their EBVs and their index values, as well as their structural soundness.  Pictured are Ivy and Abigail, chosen because Ivy is my oldest cow and her Self Replacing Index value is $20 compared with Abigail, her grand-daughter, at $44.  The breed average is $32, ranging between $0 and $66; Abigail is in the top 10% of the breed and Ivy in the bottom 10%.

Without reference to the EBVs, there is little way of predicting which of these two animals might be the more useful in a herd, over the longer term. 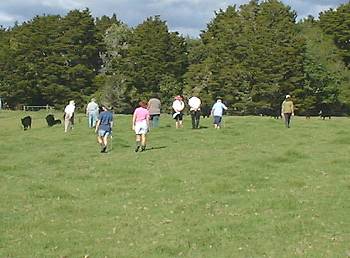 Because many of the women in our group are new to farming with cattle, I dredged out some of my old photos of the cows I started breeding from nine years ago and displayed them for the day, with the bull I first bought, their progeny, the bulls I've bred from the stud cows I then bought, and some of the cattle which have resulted from the whole programme. The point I wanted to make was that I'd started from nowhere in terms of the first cows, but have created something really exciting just by doing a lot of learning and research.

Several of the women came out for a look at the latest resulting batch of calves.

When everyone had left, I drove south for an hour to Ohaeawai, to meet Jill and Bruce, who were bringing Stella (my sister Jude's three-year-old daughter) half-way from Whangarei to spend a few days with me.  The pastures I saw on the journey were brown and crisp: we need some rain! 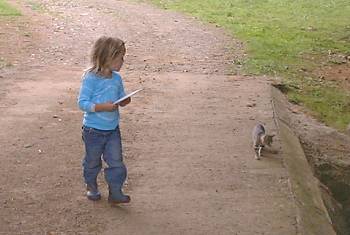 Stella spent some time drawing and painting letters to her family, so we went for a walk to put the envelope into the mail-box.  We stuck a five-cent coin to the front of the envelope, next to the 40c stamp, because I didn't have any 5c or 45c stamps for the postage!  Theoretically the rural post people are supposed to accept money and apply stamps to letters posted with the correct money supplied. 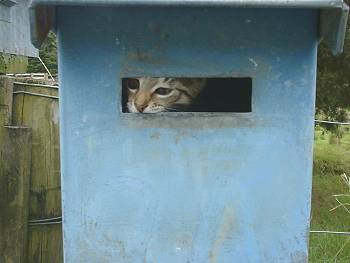 A solution at last, to the perennial problem of birds nesting in the mailbox?

This afternoon Stella and I hitched a ride on the tractor, as Stephan was off out to collect firewood.  I was surprised to see that where there is usually water running out of the bottom of the Pines paddock, which covers the eastern slope of the hill in the middle of our farm, the drain was completely dry.  Things must be getting pretty dry for the springs in that hill to have dried up!

On our way back we went to see Isla and friends.  Stella seems to have been very taken with the idea of pressing her bare tummy against Isla's warm body, so kept asking if she could do it again.  Isla wasn't prepared to cooperate with such a scheme today, so I took photos of the bull calves instead. 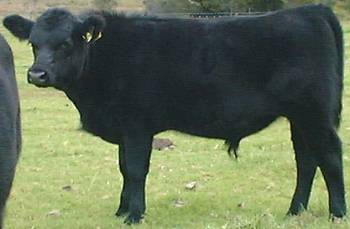 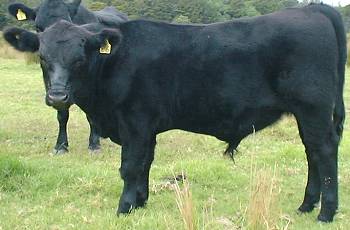 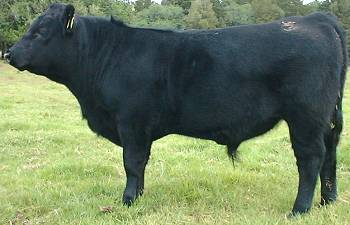 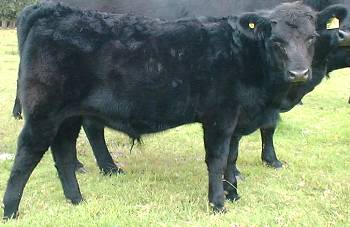 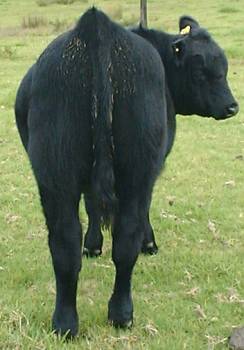 An extra shot of Aidan, since he just happened to be posing nicely.  His legs are better from behind than his older brother, Arran 20, who is ever so slightly cow-hocked.

I shall keep #26 because his pedigree and EBVs suit me, so the other three are for sale.

Stella went on her way again today, with Jill and Bruce, so my child-care duties are over for the time being.