Saturday is pancake breakfast day in Roger and Jude's house.  There were bacon and bananas, and Maple syrup and cream and coffee and tea.  Lots of fun.

When Jane told us she was coming home today and I realised I would be too, I suspected we'd end up travelling by bus.  Jane has on many occasions had the unhappy traveller's bad luck of being booked to fly on days when the plane can't land or its wings have fallen off on the way out of the hangar ...  I feared she would jinx my trip home.

Stephan pointed out that perhaps my presence on the flight actually balanced it in the other direction and if I hadn't been there, it wouldn't have flown.

We left Auckland in pouring rain and I knew that if the weather was similar in Kaitaia, we wouldn't get in.  The flight was horrible and I kept one of those special little bags handy in the seat pocket in front of me...  I suspect eating so much cream on my pancakes was not the best thing this morning.

But Kaitaia's skies were relatively clear and although we landed on one wheel with lots of exciting swerving about in the wind, at least we were down! 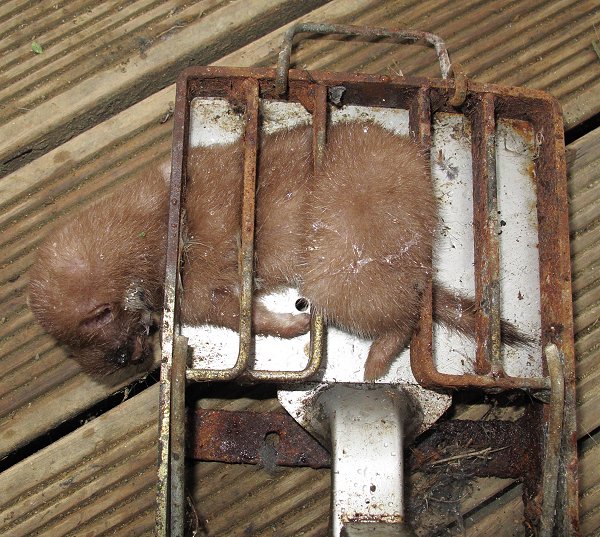 A young stoat, caught near the pond down near the chicken cages.  No doubt there are more, but it's good to catch another one.  These DOC200 traps really do a fast and certain job of killing animals like this. 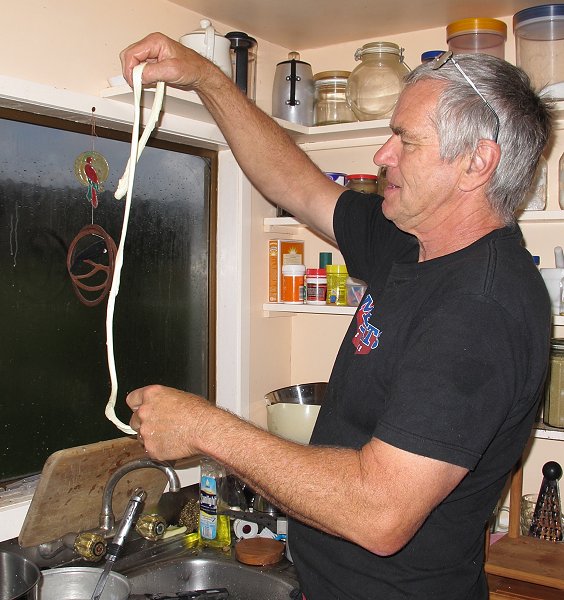 Stephan making Mozzarella Cheese.  Part of the process is stretching the cheese and if it's a good batch, it's really elastic and shiny. 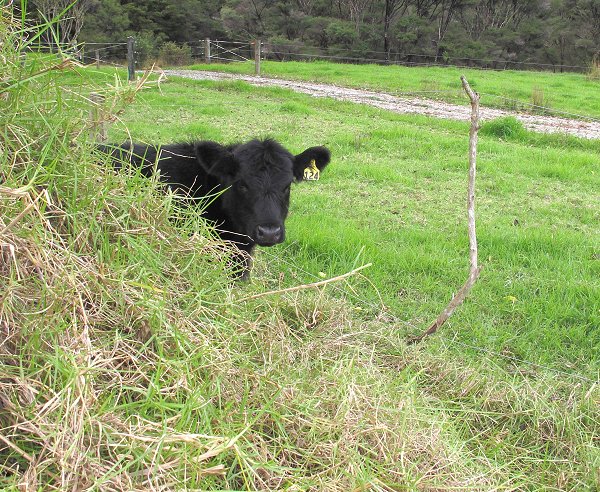 Damara 74's daughter where she shouldn't be.  I left the fences off for a while hoping she'd make her own way out, but she was still there a couple of hours later, so I had to make her go.  I found a long bit of branch and propped it between the two wires of the fence, then tried to get her to step through the gap.  As usual in this sort of situation, we went around and around the tree for a while before she finally got the right idea and jumped through the fence.  Sometimes it works being very calm with them and sometimes it doesn't.

This calf was a pretty little thing, but she really hasn't grown as well as I would like, so I'll sell her.  She would make a perfectly nice breeding cow for someone, but I want to even up my herd so that the animals I have grow at similar rates.

Damara 74 was tiny when she was a calf and was the smallest two-year-old to calve in her first year.  Her son is bull #96, who's an impressive sort of animal, so she's getting another chance.  It would seem that the genetic mix with Joe 90 didn't work particularly well.  This year Damara is in calf to Pono of Kawatiri, thanks to Mr David Bone, who gave me five straws last year.

Looking back to what I wrote about Damara last year, I note she was the daughter from a free straw, now in calf to one. 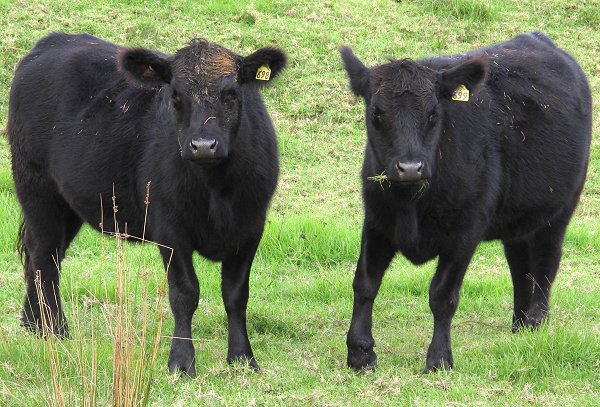 The twins are doing well enough.  I'm always pleasantly surprised by their progress, since they didn't have as good an early start as their herd-mates, having had to share their feed source.  Their mother's calf this year isn't any better than either of them were last year, which is interesting - different bull, not such good growth.  All six of bull #89's daughters are very good heifers.  I'm pleased they've continued looking as good as their early development indicated. 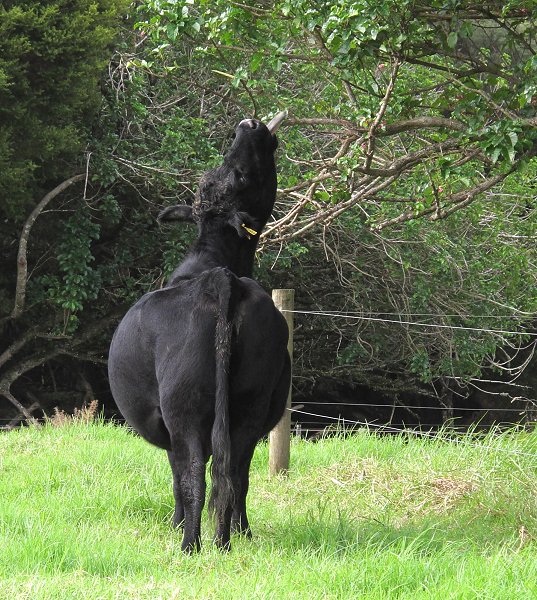 Eva is a Puriri Tree expert: she reaches as high as she can with her tongue and if she can't grab any leaves that way, she hooks her chin over a small branch to bring it down and works her head along to the end where she can then reach the leaves.

I went back to the optometrist today for a second eye test, because the new lenses in my glasses are horrible.  Actually it's slightly more complicated than that: the new left lenses make everything sparklingly clear, but my right eye now seems so blurry it's thrown me off balance completely.  I've consequently not been wearing them.

Apparently my right eye's vision is as good as they can make it, but something is going awry within.  There's diffraction indicating the early development of a cataract, which is unusual at my tender age, but not unheard of.  I find it all tremendously frustrating, having had such marvellous eyesight for most of my life until the deterioration of these last few years.

I have been instructed to wear the glasses as much as possible and told my brain will adjust to rely on my best eye.  I shall anticipate that change with hope. 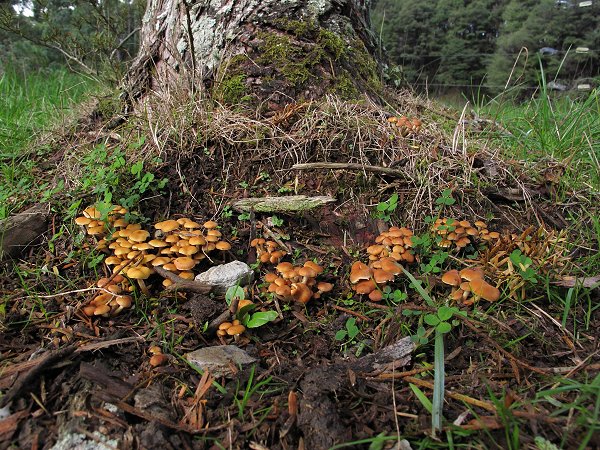 What pretty fungi.  These regularly grow around the base of this Totara Tree beside the Back Barn gateway. 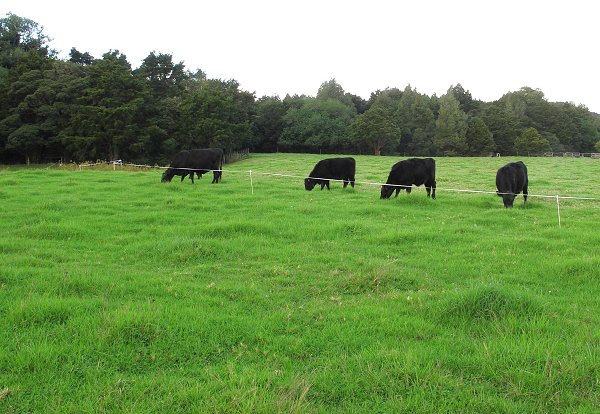 The house-cow mob continue to get the best grass, now being break-fed across the Windmill Paddock.

Stephan came in on the tractor just after noon with a thumbs-up and a bow, indicating he has completed the swamp fence!  Excellent.

There are still the gullies to be done, which we had envisaged doing as part of the same job, but the Environment Fund provision will only cover the bits of riparian fencing still to be finished in the Bush Flat and Small Hill Paddocks.  We'll have to do the gully reserves as we can later. 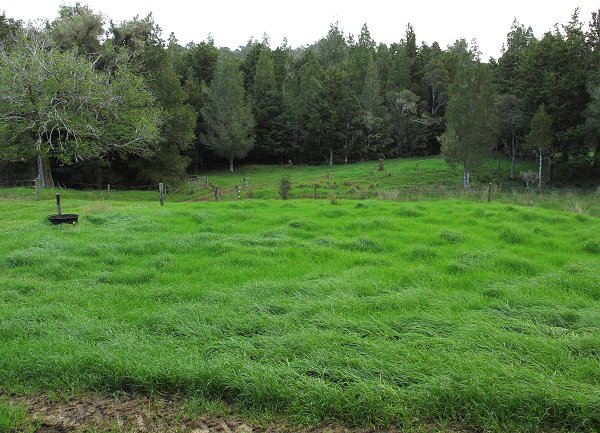 Where the fencing is now complete, there's some very nice grass awaiting the young cattle.  This is now the Big Back North paddock, on the northern side of the swamp. 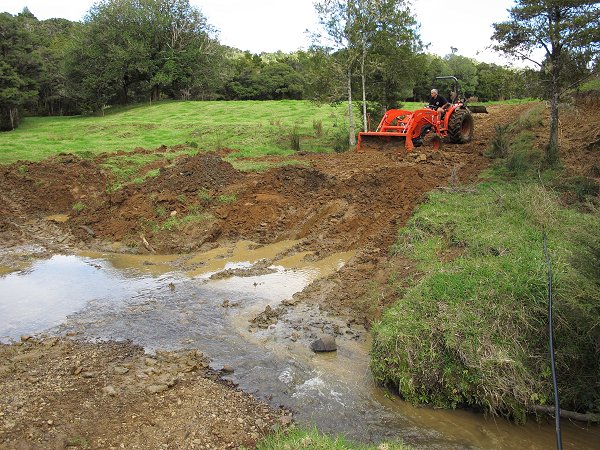 On to the next job: this is pretty messy!  Just to the right of this picture is the boggy crossing the cattle often use, where they've been gradually chopping out the bank.  We need to exclude them from that area and do something about reducing the amount of soil run-off into the stream.  I've tried to reduce the cattle traffic through the crossing in recent months by giving them access to the track between the two parts of the Small Hill paddock.

The plan here is to create a couple of drainage "sumps" in which run-off water will collect so that the silt is filtered out, while the clear water runs over to the stream.  That means quite a bit of fence alteration.  The first change will be to the Bush Flat paddock (toward which we are looking), whose gateway was directly onto the stream bed and will shift up to about where the tractor is in the photograph.  There will have to be a fence from that gateway, past the sump and along the stream, which will significantly change the layout of the paddock and probably confuse the cattle for a while.  On the other side of the stream, the fence between the Bush Flat and Mushroom 3 will move across to run along that side of the stream, making the MR3 paddock slightly larger and providing more protection to the huge Puriri at the end of the lane (just to the left of the picture). 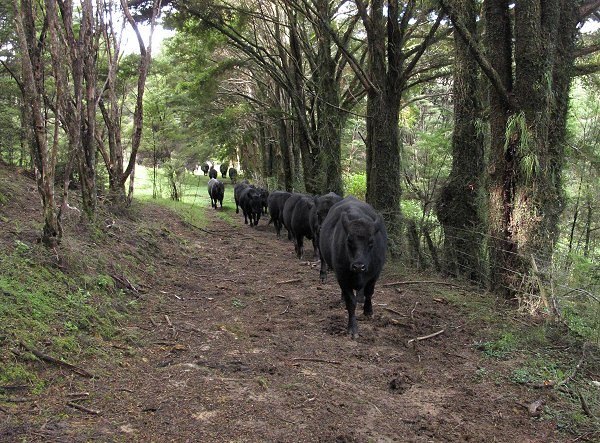 Stephan needed to go and retrieve an unused culvert pipe from the Middle Back paddock, so we went together to move the heifers to the Middle Back from the Back Barn.  Once we got them moving, they came along easily, but took some time and effort on our part for them to be convinced. 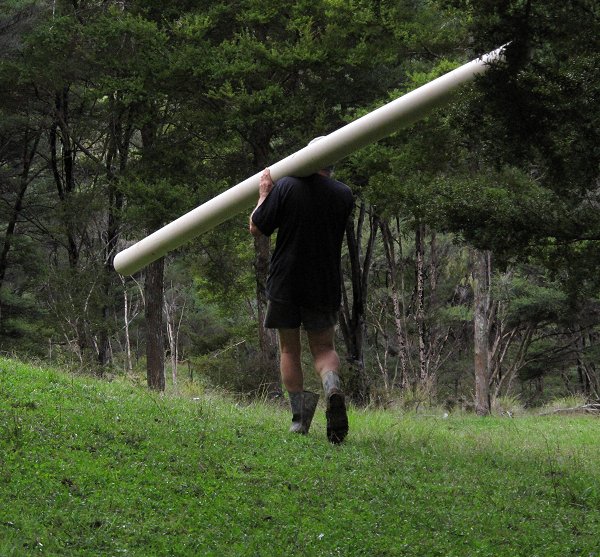 This pipe will go under the new entrance to the Bush Flat Paddock from the lane. 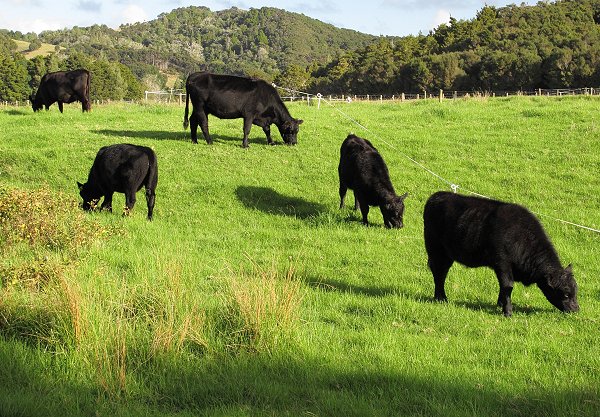 The top two animals in this picture are Zella and Dexie 101.  Dexie's daughter is the calf on the right, growing fast and looking pretty fabulous.  She used to look a bit under-done, but perhaps her mother has upped her milk supply in the latter part of her lactation.  Or maybe the calf is simply spectacular.  Her growth rate depends both upon what she eats (including milk) and her own genetics for growth; maybe she has all the best genes.  Time will tell.

Orphan 684 (604's son) has done very well.  He's on decreasing quantities of milk now, as he nears weaning.  I gradually reduced his evening feed until one night I didn't bother and he seemed happy enough to wander off to graze.  His will be the most stress-free weaning of all the calves, for him as well as for us.