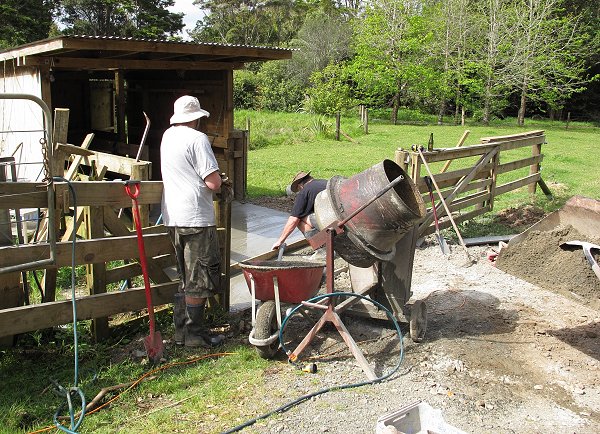 Rachel (my sister) and Issa (my nephew) arrived late last night.  With Labour Day on Monday, this is a three-day weekend.

Issa helped Stephan today, preparing for and then pouring the concrete in the cow-shed outside yard. 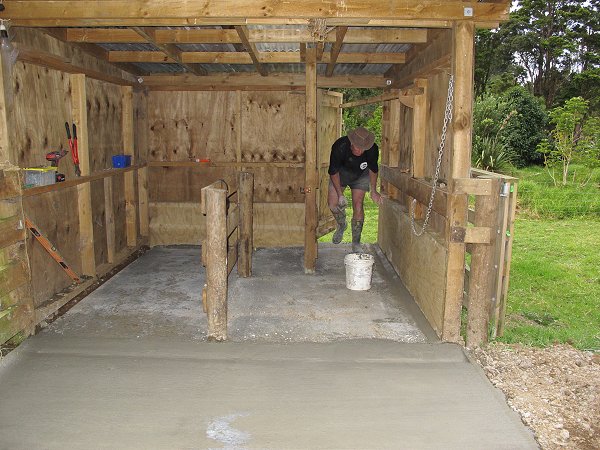 The concrete has a very slight slope toward the back of the shed, where there's a pipe to a soakage pit outside.  There shouldn't be too much mess going out there, but the floor needs to be easily cleanable.

Between the outside yard and the inner floor, there's a shallow sloping groove which should take any rain water from the outside area off to the side, rather than letting it run through the inside area - that wouldn't be very nice for a calf in the inside pen, otherwise keeping dry.

In this picture Stephan had just finished shaping some concrete to form a sloped edge between floor and the plywood along the wall, all in the interests of easy-cleaning.  The concrete in the foreground is still wet. 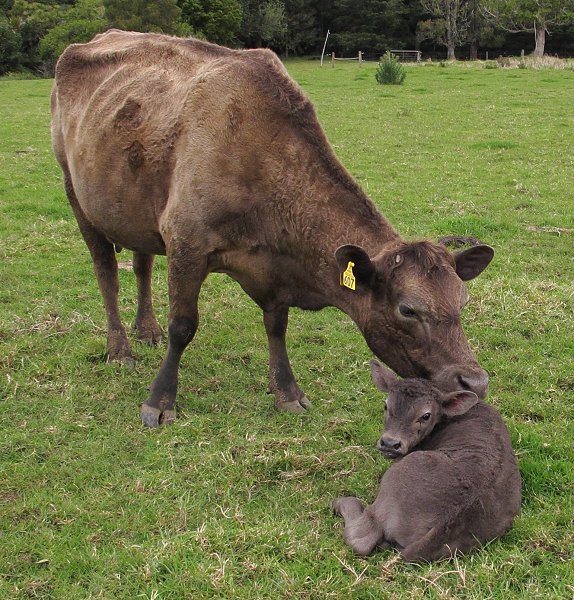 A three-calf day today, after a four-day break.  Grey 607 (pictured) was number two.  This is 607's third grey son.  I'd rather like a daughter some time.

Just before dark, Damara 74 surprisingly went into labour - at only 268 days' gestation.  That calf's sire is Joe 90, who has sired the five shortest gestation calves this year.

I heard a Kiwi!  I haven't heard them at all through calving, when I normally do when I'm out checking late at night.  It was somewhere away out the back of the farm.  They're under so much predation pressure by uncontrolled dogs that we know there will come a time when they are forever silenced. 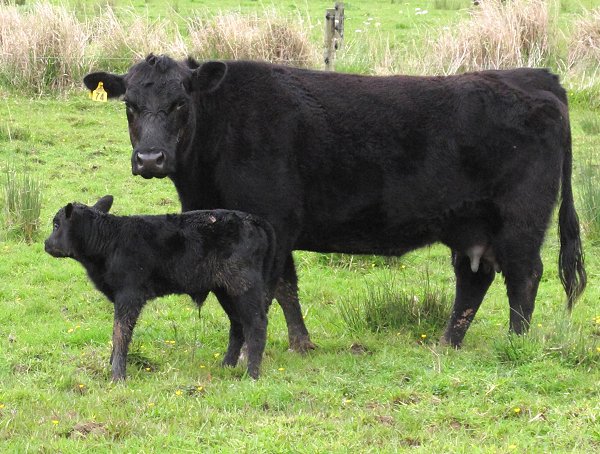 Damara and her surprised-looking daughter.  Damara is Abigail's daughter and most of them are inclined to short gestation periods.  The usual gestation is 273-290 days.  Other people seem to use an average around 283 days, but in this herd the average for heifers is 279 and for bulls, 280 days.  It makes a difference, when the range is from these very early calvings through to a maximum of about 286 days. 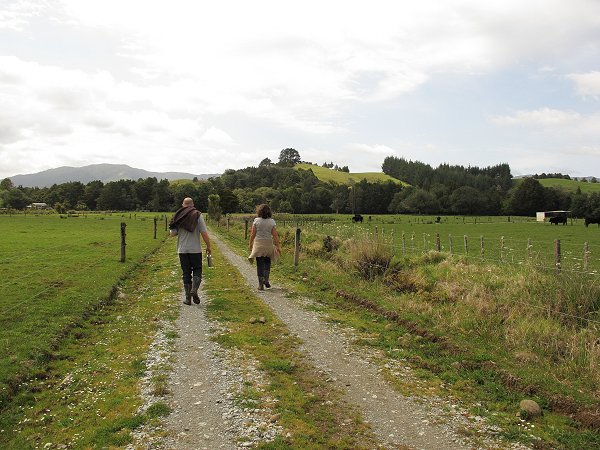 Rachel and Issa came out for a walk to the Bush Flat Reserve, Issa having expressed some interest in seeing some of the big trees.

The two of them left for Auckland again in the early afternoon. 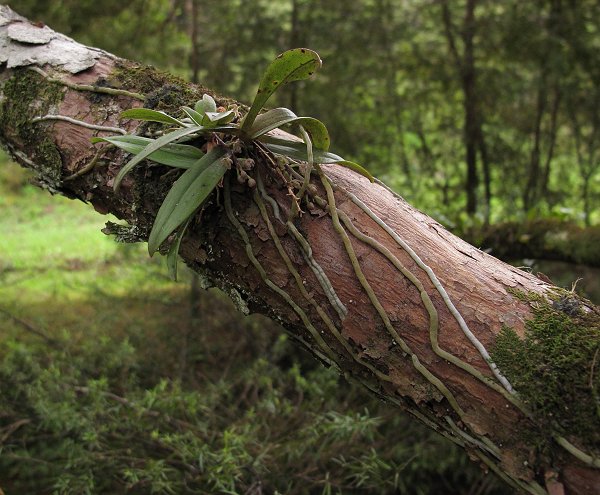 Drymoanthus adversus, the Green Fleshy Tree Orchid.  I used to get very excited about seeing these plants, until I realised how commonly they grow on so many of the farm's trees.

This is a splendid example of the growth habit of the plants, showing the roots growing out along the branch.  The roots are sometimes the thing one will see first, before spotting the plant itself.

This species is just starting to flower now.  I took a number of pictures of the flowers a couple of years ago. 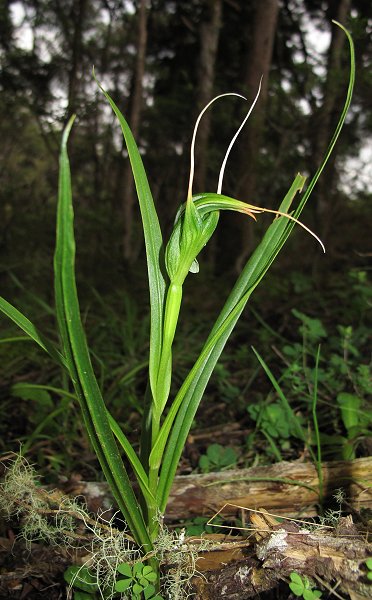 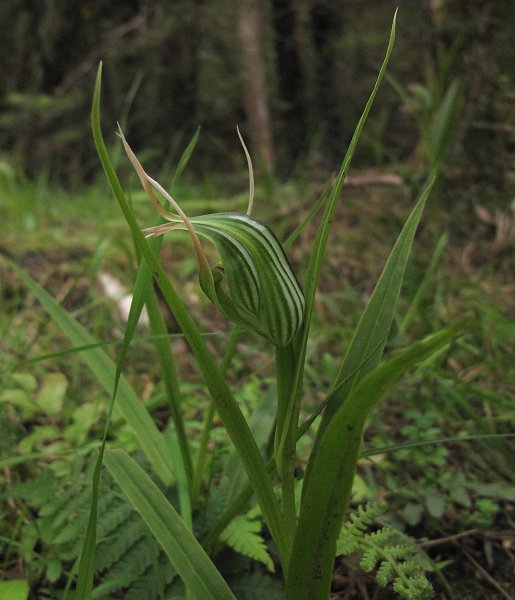 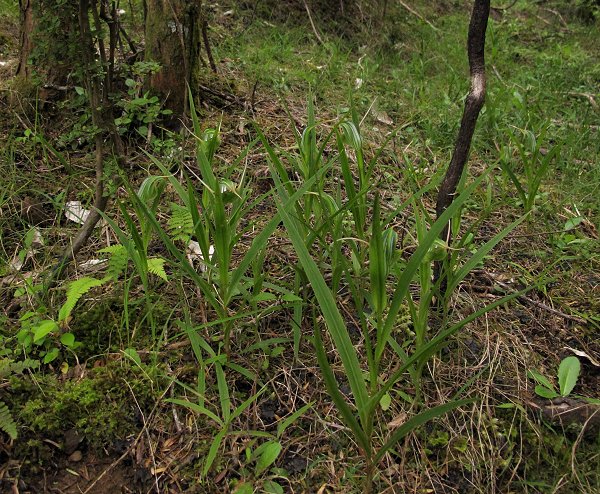 I'm still fascinated by finding these exquisite plants growing in the wild on my own farm.  I found a few of these same orchids in a few new places too, perhaps indicating that they are gradually spreading across the farm.  Bearing in mind how long it took me to find them at first though, it is quite possible I just haven't noticed them in the other locations before. 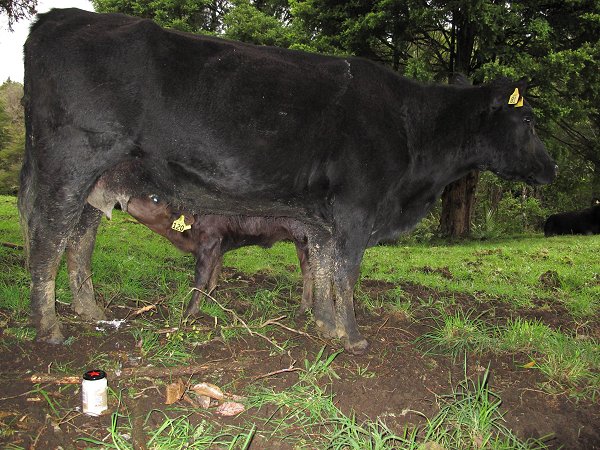 We ran out of milk again, so I took my jar with me when going to check on the cows.  Demelza was lying down quite comfortably and I didn't like to disturb her, so gave Eva a bit of a stroke and then, when her calf came for a feed, I milked her from the other side.  I chose that fuller-looking back teat, which was easy and fast to milk. 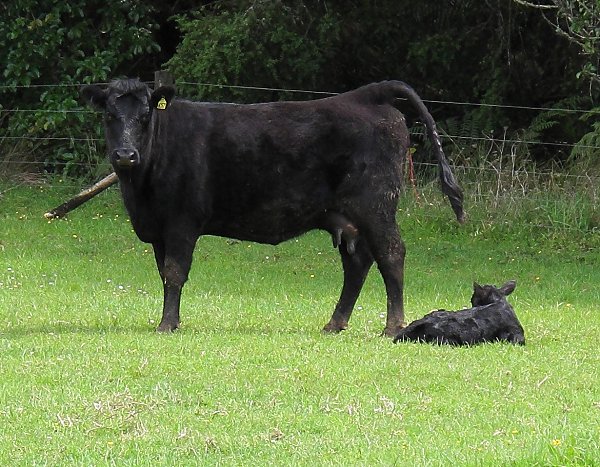 I didn't go to bed at all last night, because when I did my last check on this two-year-old heifer, she looked like she was very probably experiencing early labour.  I checked on her regularly through the night and every time I did, she was slightly advanced in the process, so I stayed up for the next check.  Quite mad, but I didn't have to be anywhere today, so I knew I could sleep later.

The calf was born at 5.45am, with a bit of help from me - although it wasn't a very good sort of help, because I got a bit panicked about the calf being a bit stuck at a crucial moment and because the heifer was standing at the time and I didn't catch her as she came out, the calf's back end hit the ground rather hard.  I just had to hope I hadn't done any damage.

After checking that the calf had got up to feed, I went to sleep for a few hours. 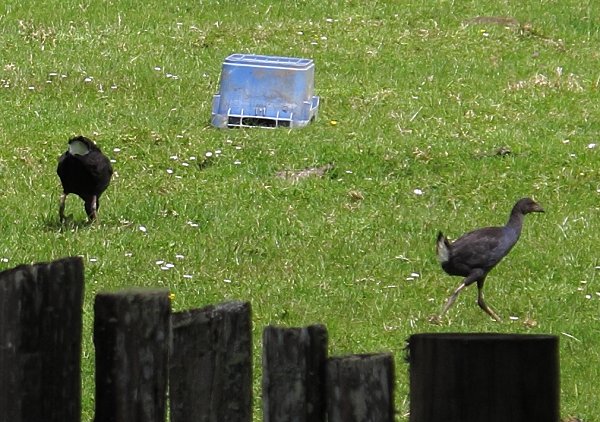 The Pukeko chicks look increasingly like their parents, although still a little smaller and their wing feathers aren't yet fully grown, so their back ends don't look quite as elegant as they soon will. 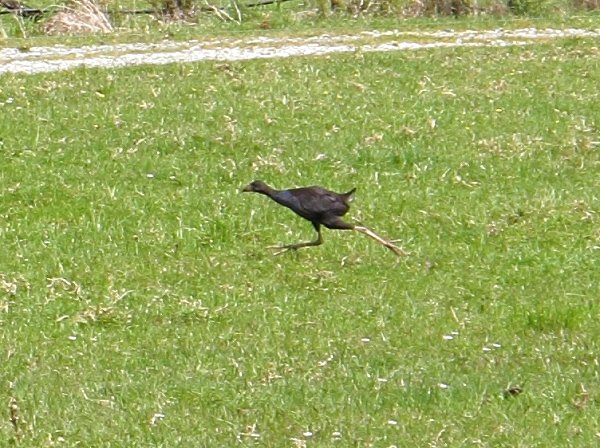 The chicks remain very alert to movement and presumed danger, and as soon as I move outside the house they sprint for the cover of the trees or long grass at the edge of the paddocks. 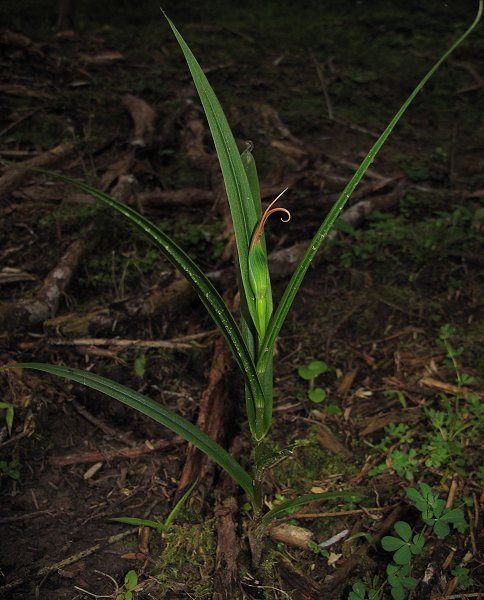 This orchid was two hillsides over from the main population I've found to date, on the southern-facing side of the Big Back Paddock.  I would expect this area to have more of these orchids, being directly in the way of the winds blowing from the Herekino Forest, but perhaps the growing conditions have not been as good here as in the Back Barn Paddock. 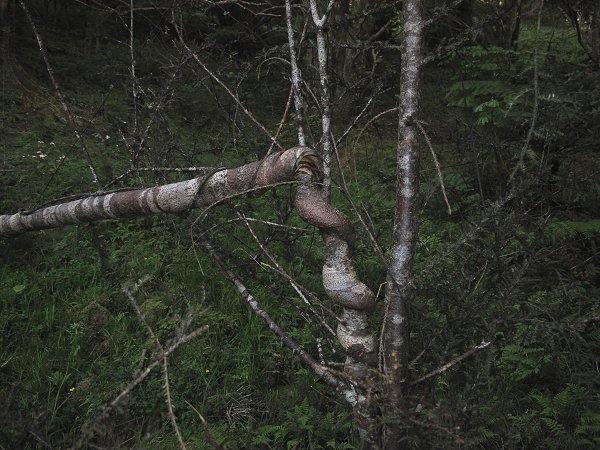 The twisted tree I photographed back in March has broken at the point of the highest twist.  I would have liked to observe its future growth, but perhaps the plant which is wrapped around the tree has it too tightly in its grasp.  I suppose the top became too heavy for the restricted width of the lower trunk. 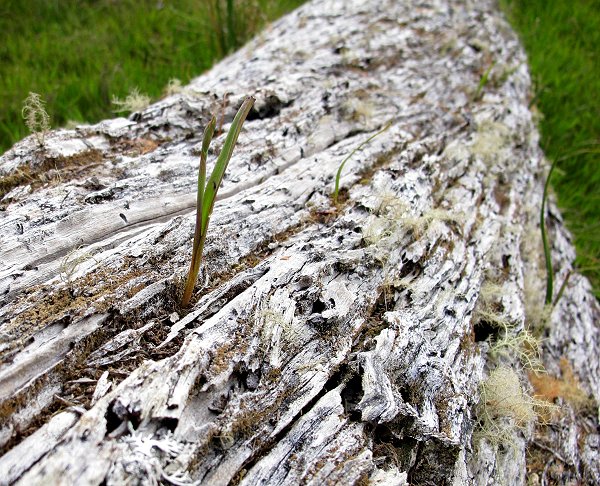 The tiny orchid plants I have been watching on the fallen Puriri trunk in the Big Back swamp, have mostly grown flower stems - although several have been nipped off.

Earlier photos of their growth are here and here.

The tree fell down in March 2009, and I thought I had posted some photos of it in its earlier state, but they don't appear anywhere.  I came across them while looking for something else and so here they are, below. 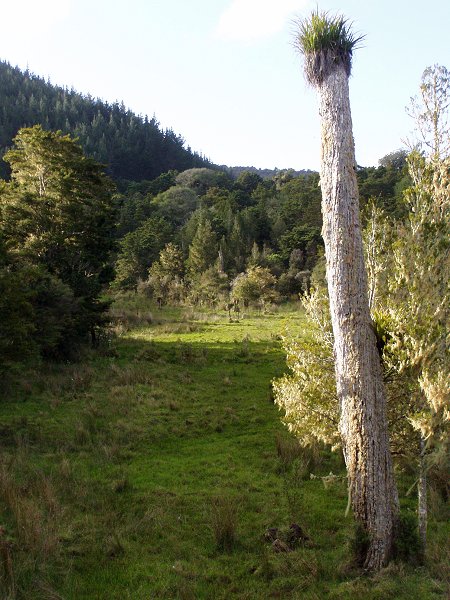 There's lots of lichen growing on the trunk, but other than the epiphyte at the top, no other plants are obvious.

This must have been an impressive tree when it was alive, but that was a very long time ago.  There are no obvious branch remains in the area around the trunk, so I presume it had been standing like that for decades.  I certainly remember it in this same state in the '80s when I first visited the farm. 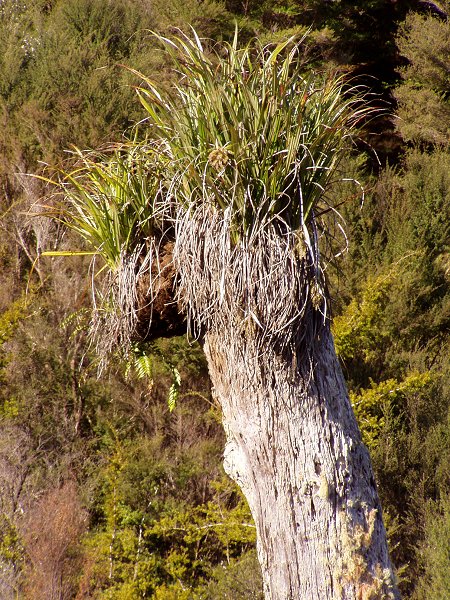 This one taken on 21 September 2008, when the epiphyte was in flower.

Now that the trunk is lying down, the lichen has all but disappeared.  I can't remember whether there was any evidence of the epiphytes when I found the trunk had fallen - the cattle may already have eaten them, or they could have been plunged beneath the surface of the swamp when the whole lot fell over; there is certainly much less trunk length visible on the surface now than the height of the tree in these pictures. 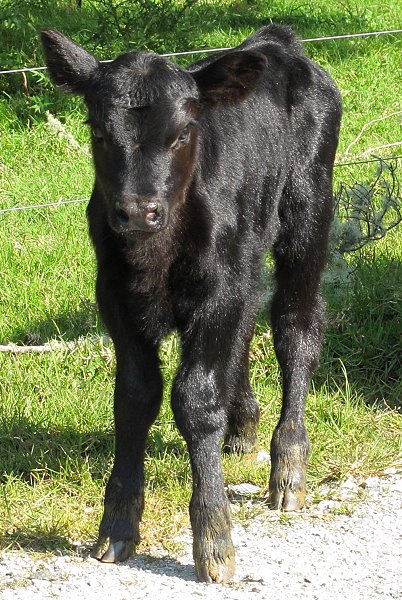 Damara 74's daughter, now not looking quite so surprised at her own presence in the world - it was the way her eyeballs seemed so prominent which gave her that look.  She's a pretty wee thing. 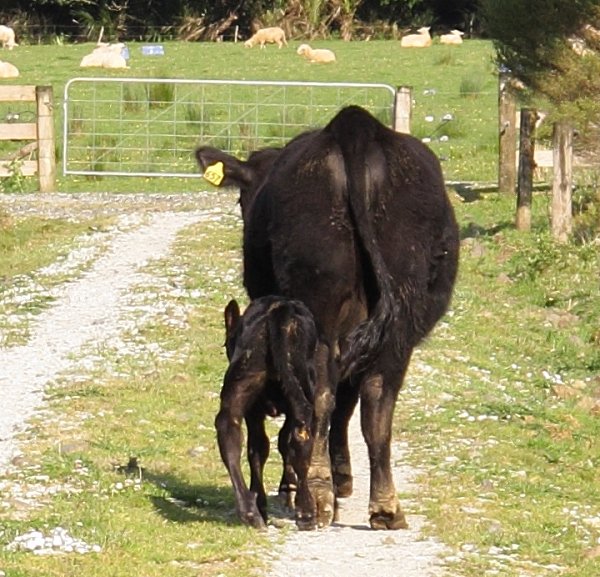 I let Zella and her companions 657 and new daughter, out of the paddock to graze the driveway area this morning, but 657 pushed under the rope holding the gate open, possibly because her calf had done so first, and headed off up the lanes.

Later on I went to get some of the other cows and calves in for weighing and every time I got anywhere near her, 657 went a bit further out.

Eventually I walked a long way around her, across the Mushroom paddocks and looped around behind her and the calf and slowly walked them back to where they'd come from.  I was going to tag and weigh the calf, but wasn't at all happy about the way her left hind leg was bending outwards.

I'm not sure if that's a result of my dropping her when I pulled her out of her mother, or of too much walking and running around today.  I decided to leave the calf to rest, and put them safely back in the House Paddock. 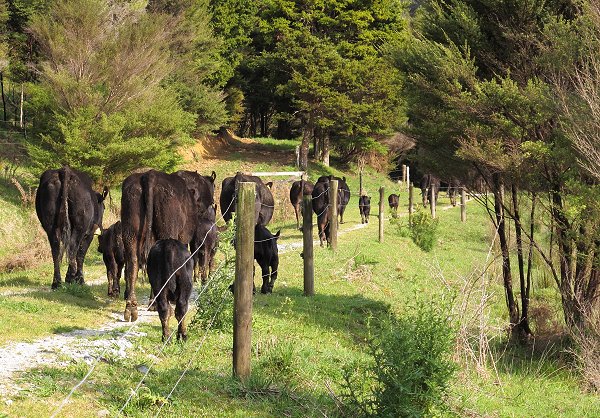 When cows and calves move quietly along together like this, all goes smoothly and it is this sort of movement I try to encourage as much as possible.  The thing I have to ensure is that the calf stragglers at the end of the group keep up with the rest, because if they lose sight of the cows, they get all confused and try and go back where they came from, which is not what I want.

The older calves are starting to look chunky and lovely.  Some of them are also getting smelly, as the usual Coccidiosis infection sets in and runs its course.