The week beginning the 12th of September 2015.
Saturday the 12th 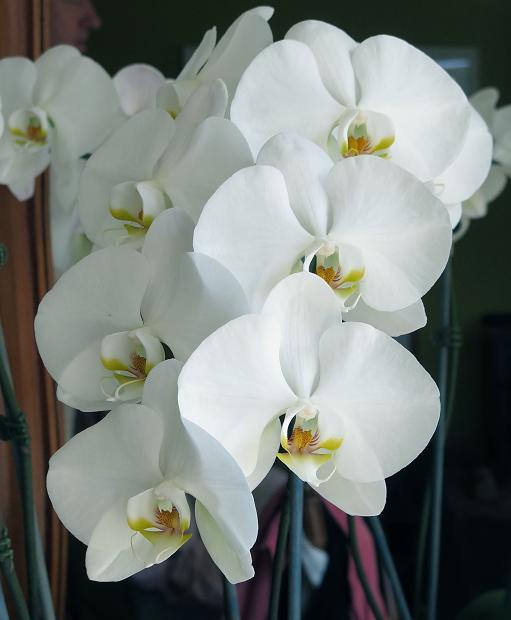 First things first, a present, from Jude, Roger, Stella, Jasper and Louie.
I was instructed to close my eyes and wait at the table after I'd finished eating breakfast and when I looked, this magnificent orchid (actually two plants) in a lovely big ceramic pot, greeted me.

They're a great deal larger than the tiny native orchids I'm usually hunting around the farm! 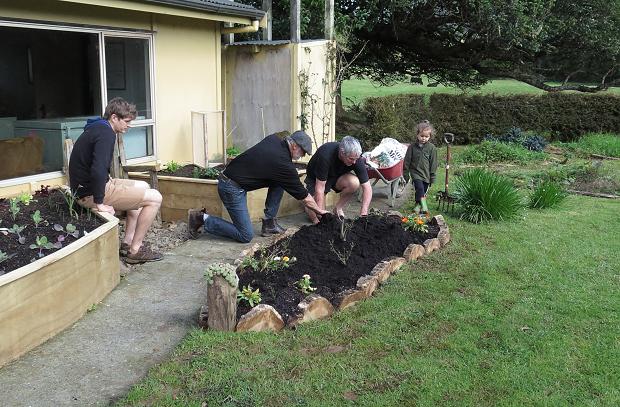 The road was to be closed from 11 so lots of the family came early in the day for my birthday.

There having been so much rain lately, the soil in the rose garden had been too wet to lift the roses, extract the weeds and fill it with the new soil.  But today it looked a little better and there was help! 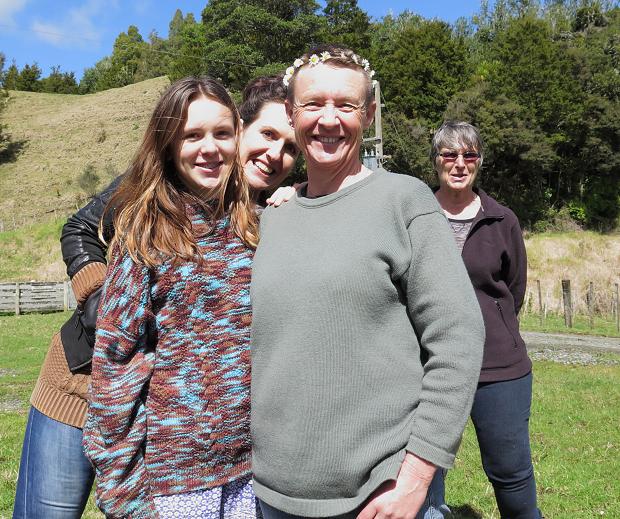 Because this year I don't need to stand around with a lot of stressed, newly-calved cows, trying to calm them during the hideous road rally noise, most of us went out to watch the stupid nonsense.

While we waited for the cars to come, Stella made me a birthday daisy-chain Tiara.

I rang up from the shed and ordered coffee for those of us who were there first and William arrived with the makings.  It is possible to get good staff!  Stephan was cooking. 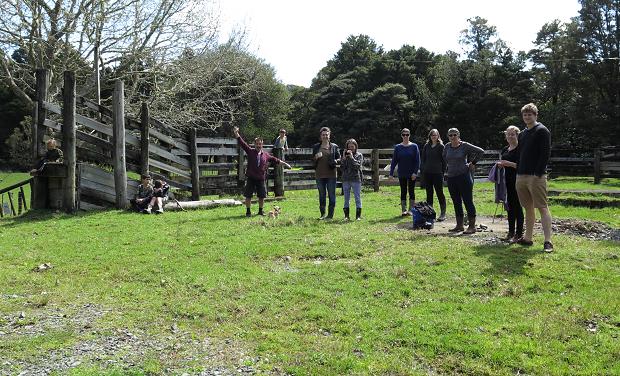 The rally was a disappointing event.  If there's going to be noise and disruption and idiots careering around the place, the very least they could have done was to put some effort into it and actually drive faster than Muriel used to drive home from town.  (She was pretty zippy!)  The first two official cars with sirens and flashing lights made the gravel fly, but after that it was ridiculously sedate, considering the drivers had the whole road to themselves with no worry about meeting opposing traffic.

Apparently a lot of them had already crashed or broken down in earlier stages on other roads. 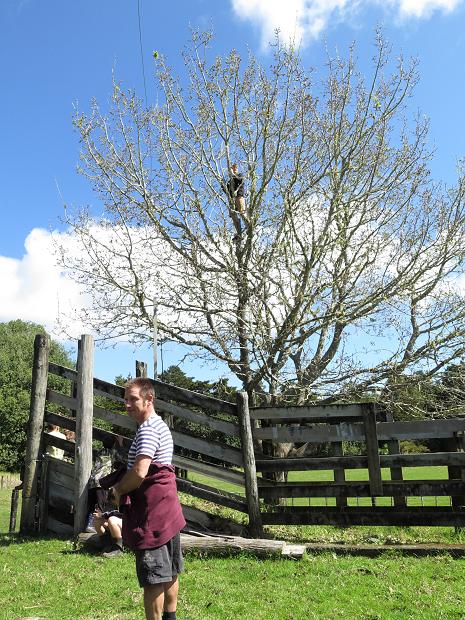 Simon climbed up for the best view from the branches of the Oak tree.  Actually I think he just climbed it because it was there. 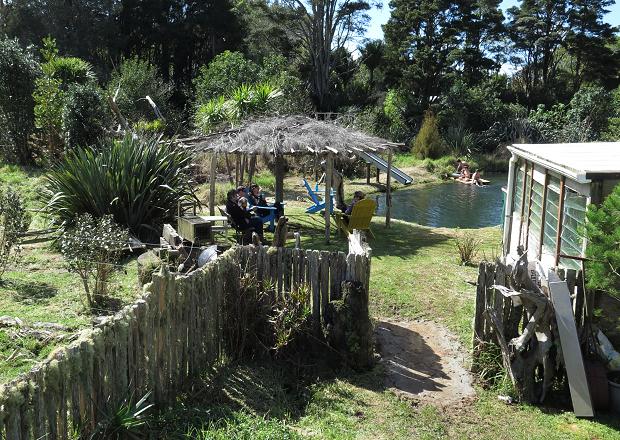 After some lunch the little boys all got in the pond, mostly staying on the raft in the warm sunshine, rather than the cold water.

At two o'clock, the time of my birth, we cracked a bottle of bubbly and shared it around the gathering of family and Jude made a speech.  Throughout my adult life I've always phoned Jill from wherever I was (I think I even did it from Wales at 3am, on 'summer time' from a phone box, when camping and hitch-hiking around the countryside in 1988).  One year Jill and I shared the annual bottle in Women's Space at the University of Auckland, before I went off to another lecture.  This year I didn't ring her.  I could have done and it would have cheered her in the moment, but I doubt she remembers my long habit and she'd have forgotten all about me as soon as she put the phone down.

More people arrived for the evening gathering, some even bringing presents, which was entirely unnecessary but very nice.  I hid the edible ones away for enjoyment later, somewhere Stephan wouldn't look.

Stephan ran a soup kitchen, having made five or six different soups which were served to everyone with bread our friend Peter had kindly baked.  The soups were Pumpkin, Kumara and Peanut; Potage Crème d'Or (Golden Soup, one of Jill's restaurant staples and about the only food I can remember eating as a child); Walnut (another Restaurant favourite and very easy to make); Pea and Ham; and French Onion.
Jeff and Helen brought a ham they'd just had cured, provided by one of the pig hunters on their farm, a delicious addition.  Then we had trifle, which I've not had for ages and always enjoy, Stephan's Coffee Liqueur Cheesecake, Sarah's cup-carrot cakes and Christina brought an Apple Cake, made from the lovely recipe Muriel regularly used. 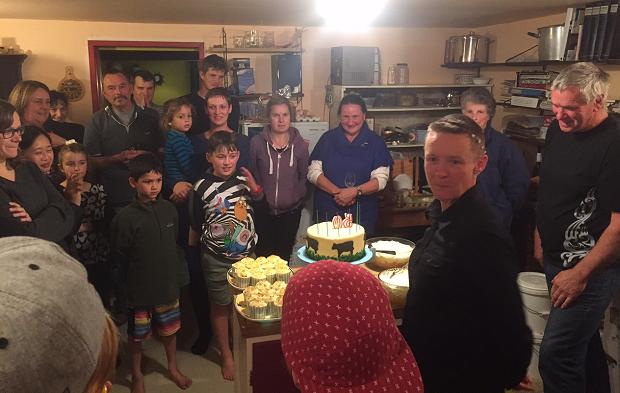 Then Sarah brought out the beautiful birthday cake she'd made me, chocolate inside with rich creamy icing, black cows around the outside and green coloured shredded coconut grass and that still-slightly-challenging number in wax candles alight on top.

It was a nice-sized gathering allowing everyone to talk to everyone else at some point in the evening.

The person in the room who'd known me for longest was not my sister, but Roz, my school teacher from my second year at school (when I was six).  We both get a kick out of that very long association.  Roz is in the photo, tucked in at the back left, by the corner cupboard.

(If you think your invitation must have been lost in the post, please let us know; there's still ham to be glazed, the makings of Crème Brûlée in the fridge and a willingness to go on celebrating this particular event until at least my 51st conception anniversary on the 19th of December!)

Fifty is interesting.  It's the first significant age I can remember my parents attaining (they were 28 and 41 at my birth) and so it has always seemed old.  I'm writing this three weeks later and have had time to adjust to a discomfort I couldn't really explain to myself and that feeling has subsided.  Numerical age is a strange sort of thing in a life in which one does not participate in the usual societal milestones; I chose never to be married, not to have children, for instance, two events which appear to mark transitions into maturity for many people.  To be fifty means I must have passed that "maturity" point at some time without actually noticing. 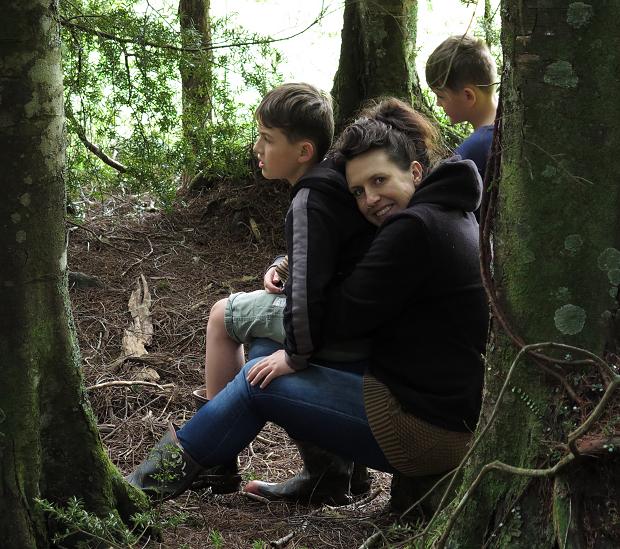 Stella said she wanted to go to a place she remembered I'd taken her before, but couldn't remember where.  She drew me a picture to give the impression of the dimensions of the trees and with a bit more discussion, I concluded she meant the Kahikatea stand in the Tank paddock, which turned out to be correct.

Stella experimented with some macro photography while the boys and Jude explored and found nice places to sit. 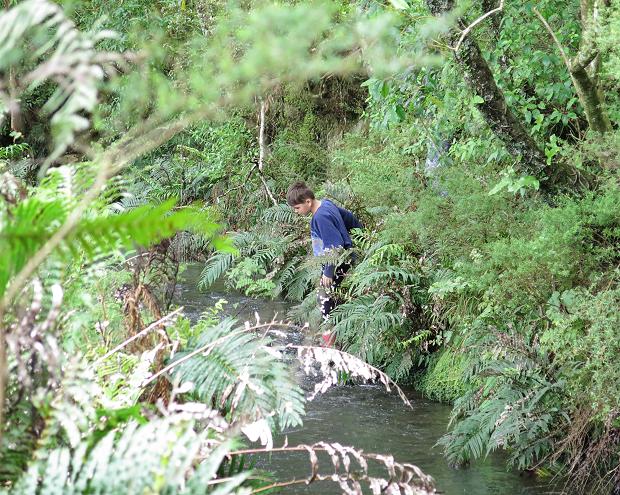 Jasper wanted to walk back across the farm, so we climbed over the fence and crossed the stream into the Windmill Paddock to walk home across the fields.  (That's Louie in the picture, working out how to get across the stream without getting water in his boots.) 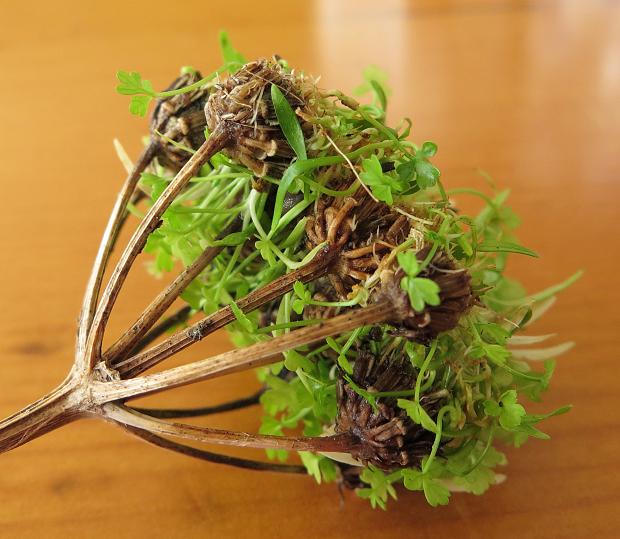 The Parsley Dropwort flower heads are germinating.  I brought this back so we could do some more macro photography experimentation and then gave it to the budgies, who made short work of it. 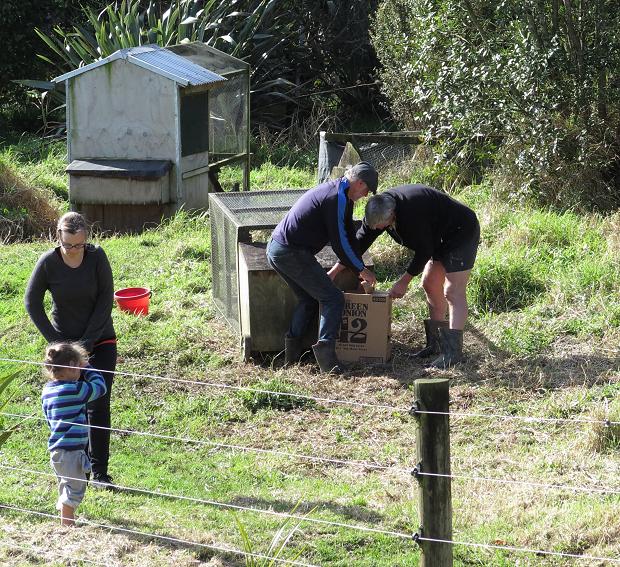 Jude, Roger, the three children and Cecil, the tiny thing they try to pretend is not a dog, left at around two and then Miriam, William and the little boys arrived to collect the three young hens, at last, to take them to their new home in Auckland.  It was both sad and a relief to see them go. 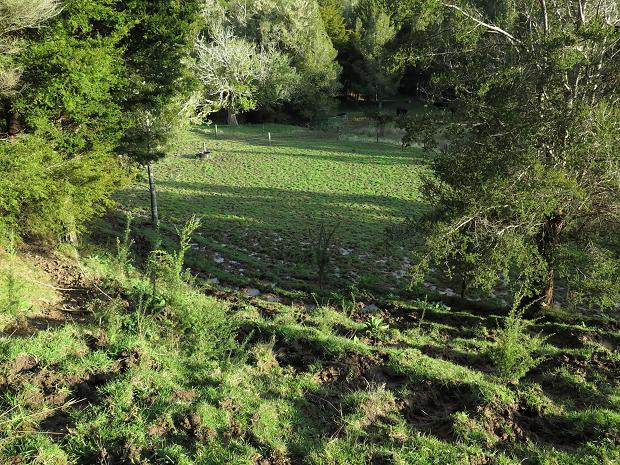 Then I went off out the back to check on animals, open some gates.  Everything is ridiculously boggy, with pools of water in every hoofprint and sloshy mud between.  It always astonishes me that this patch of mud and grass at the bottom of the Big Back South, recovers from this state to look like this again in the summer and autumn.

On what turned out to be a beautifully sunny day, I brought the R3/4 heifers in for a Copper injection.  This is the latest in their pregnancies I've ever done such a thing, but I figure better that they have it than not.  I worked them carefully, trying to avoid putting bullies with bullied, which could have led to harmful bunting of round calf-full bellies. 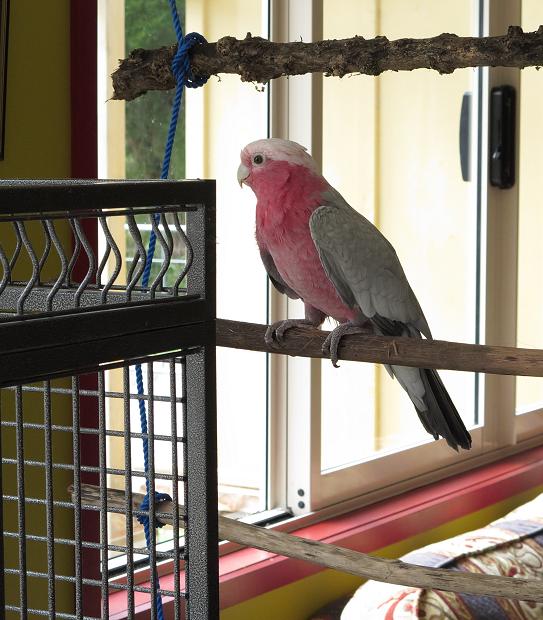 Floss is settling in.  I made her a ladder to hang beside her cage, hoping she might like to sit up there when she's out. 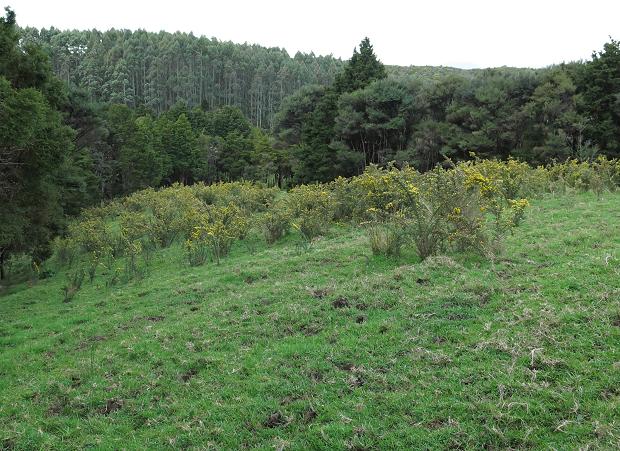 This is what happens if the gorse sprayer doesn't do his job for two summers (the first, lying around with a detached toe, the second spent fencing).  This slope (I was looking down from the top of the Spring hill) was clear for a while, but there's so much gorse seed in the ground that constant work is required to prevent it taking over again. 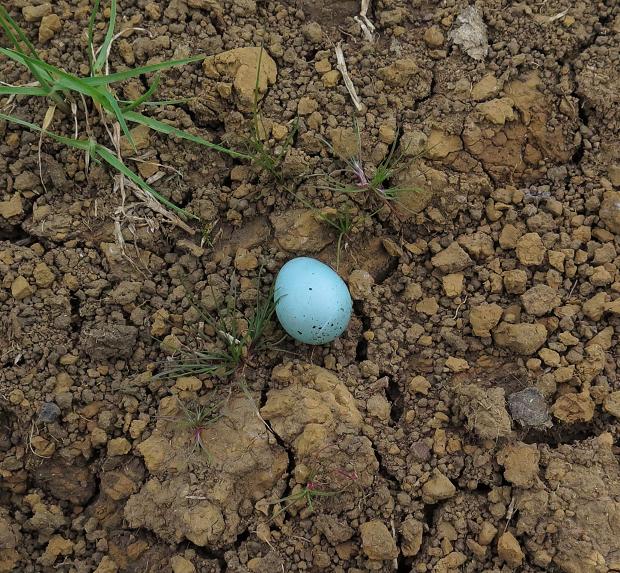 The second little blue egg I've found in the last few days.  They have been taken from nests by something, not hatched.

The twelve cows came in today for their copper injection. 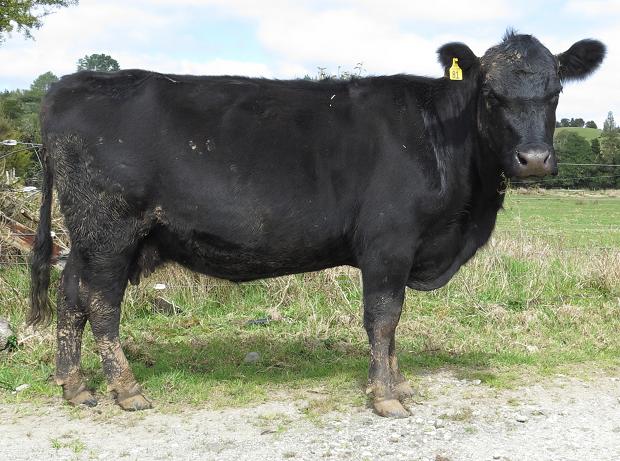 I thought it might be time to begin the Eva Calving Date Competition, so took a few photos for use on that page. 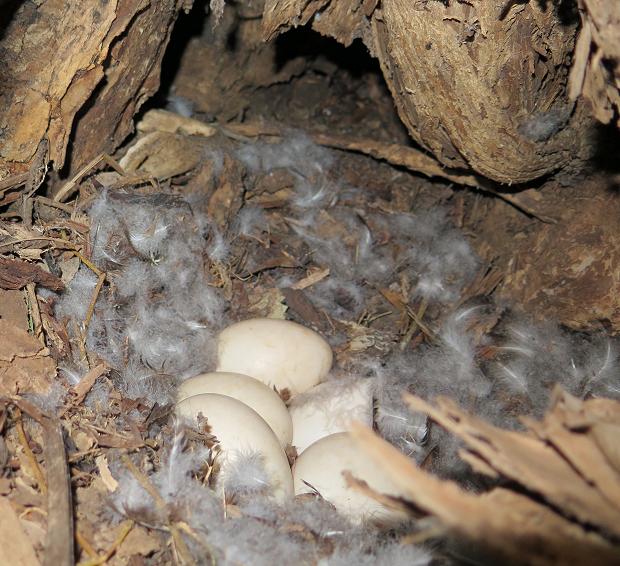 I found this nest in the bottom of the huge Puriri in the Frog Paddock.  All sorts of creatures use this dry, covered space, from little pigs and possums which have obviously gone there to die and left their bones to be discovered later, to the rabbits which have dug out a significant amount of soil which now forms a mound at the base of the tree.  I've never found a nest here before and presumed it to be that of a pheasant.  There was a flurry of scuffling when I poked my camera into the space to try and take a photo of whatever was in here.  There must be quite a lot of room up in the trunk of the tree. 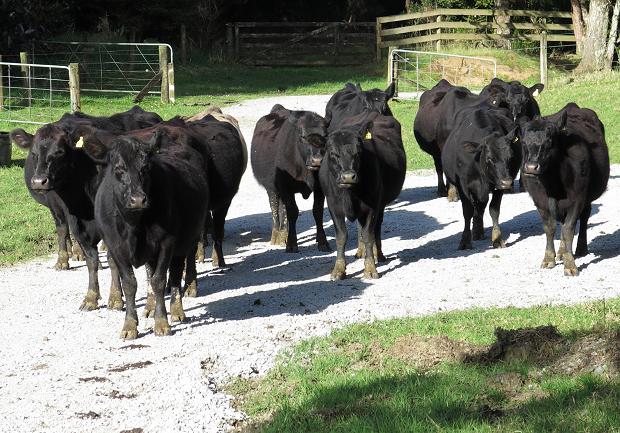 I put tick treatment on the R3/4 heifers this afternoon and then they stood quietly on the driveway for about an hour, enjoying the sunshine, before they walked off up the lane to their paddock.

In the evening I went and waited to see if some pigs were around.  It was very cold and there weren't any I could see. 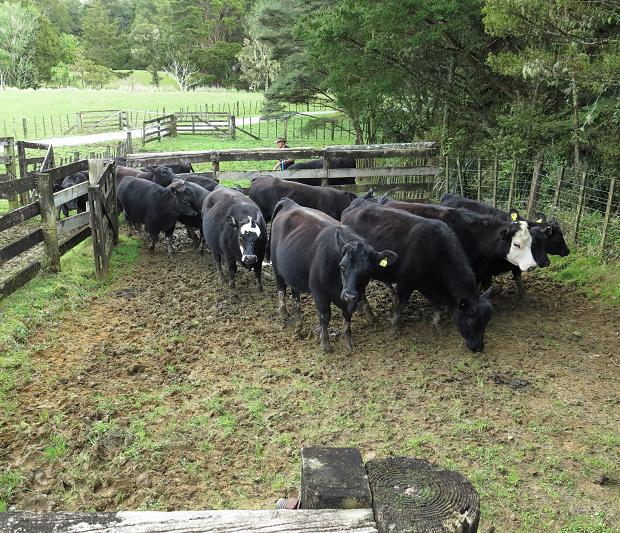 The young heifers' turn for copper and tick treatment.  I usually follow the advice not to do anything else at the same time as the copper injection but I know lots of people do more than copper when they have their cattle in the yards and today I decided it was much easier to do the two treatments together.  The copper is quite stressful on their systems.

I was delighted to note that the yearlings all looked smooth and lovely.  By the end of winter they often look really straggly, thin with untidy coats.  But this year, despite the difficult winter, I seem to have done them quite well.

Afterwards we got the three non-breeding heifers from Jane's place, did them, then after leaving them to get acquainted with each other while we had lunch, put the mixed dozen (nine yearlings and the three R2 heifers) over the road, out of the way. 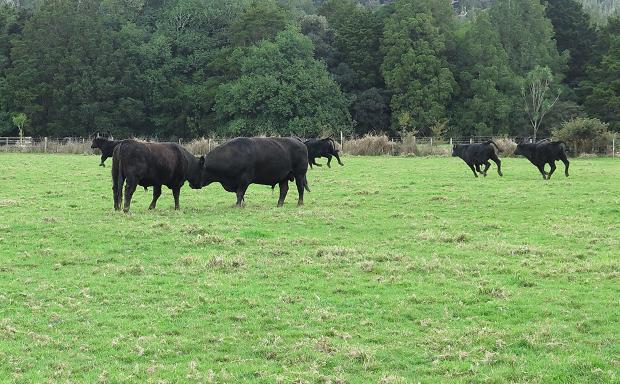 Then it was the bulls' turn.  Sometimes they're not entirely cooperative.  The yearlings ran around us in a big circle and the two older bulls pushed each other around in the middle of the paddock.  But we prevailed; we're the ones with opposable thumbs! 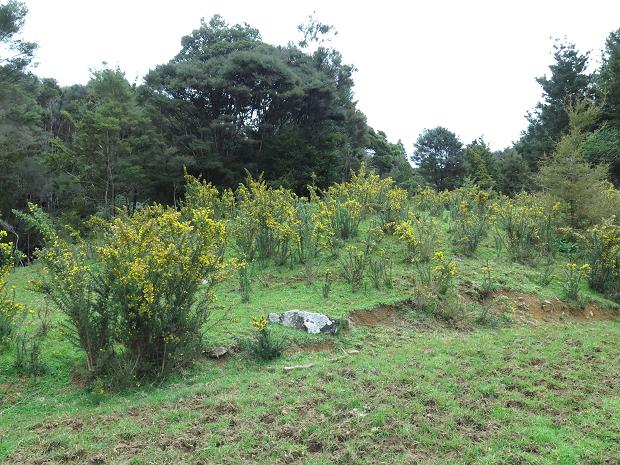 I took the photos of the flowering gorse hoping to shame Stephan into action, but he's already cut and burnt this lot in the Big Back South since I took the picture, so the hillside is again clear.  While conditions were damp, he got in with the scrub-bar and then had a couple of fires, intending to spray the regrowth when it appears and requires less herbicide. 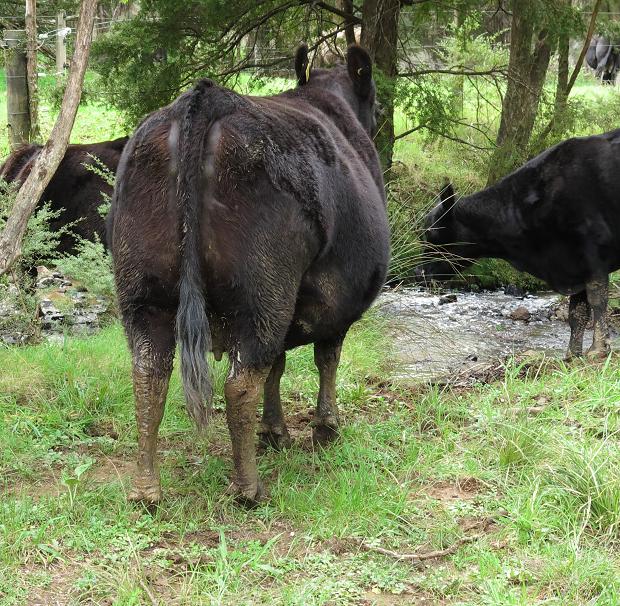 701 is so fat.  She's not due to calve until early November. 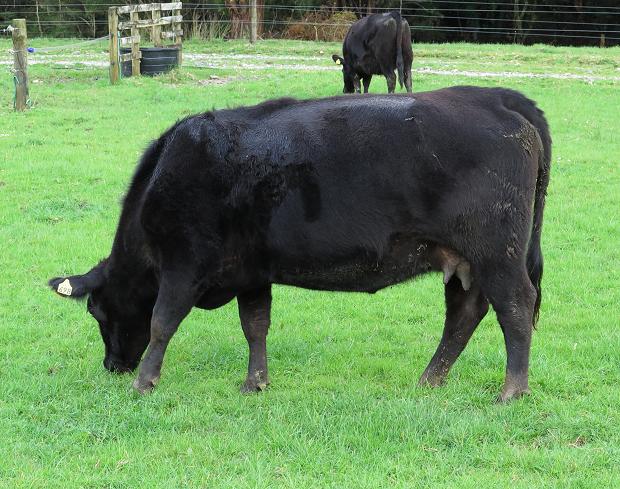 Gem 698 has a bit more udder development than I'd expect to see in a cow due in 18 days, that calving date based on the lengths of her previous gestations.

I always think someone is going to calve early, have twins probably and usually I'm wrong.  The last time I was right was when Gem and Meg were born four years ago.

and can be seen here

During calving I'm likely to update the "Today's Photo" more regularly than usual, if you'd like to keep up with occasional casual news reports.