The week beginning the 19th of September 2015.
Saturday the 19th 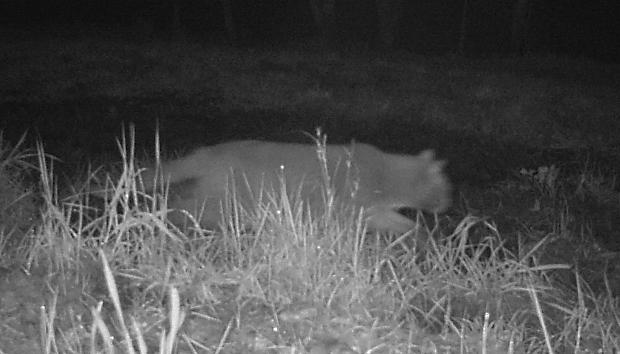 Caught on the trail camera this morning, just before six, a feral cat.  There are a lot of them about, I suspect, but they're very hard to trap.

I drafted the five R3/4 heifers I expect to calve first from the rest of the mob and started break-feeding them in Flat 5b.  The others can stay out the back for a while longer.

There was light drizzle falling but at least the sun was shining, right through the raindrop on the camera lens.

Aha!  That's not a pheasant, as I thought the identity of the owner of this nest to be but a Putangitangi, Paradise Shelduck.  How exciting; I've never found a live nest before.  Most of the time the birds nest high in trees in the big ephiphytic Lily plants, or in nests like this in places I never see.

I don't expect I'll see the ducklings, but it's fun to know where she's nesting.  (This is a pair I see out in this area every year.)  I don't think she's nested here before, since it's a place I look into quite often as I pass.  Perhaps her former nest was up in the neighbouring Puriri we cut down in March.

I put Floss out in a shower of rain to see what would happen - I've read that parrots like rain on their feathers and indeed she did, a lot, fluffing and squawking and carrying on like a mad thing.

Having sent the yearlings away Over the Road the other day, the two-year-olds are now a smaller mob of seven, grazing their way down the Windmill Paddock. 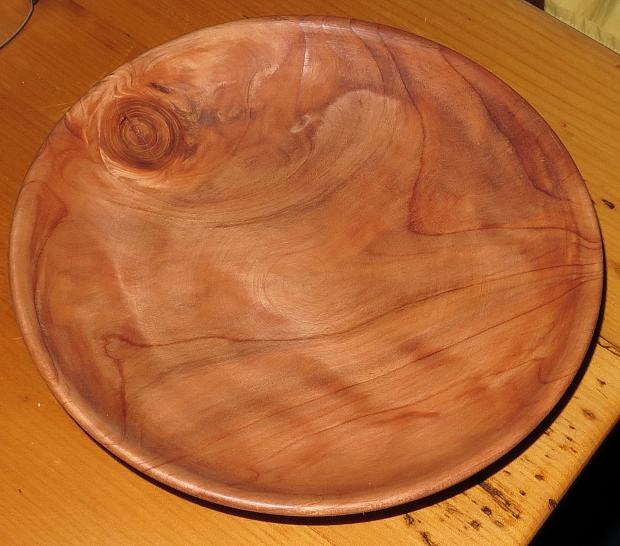 A year or two ago a neighbour gave Stephan a piece of Redwood to do some wood turning, from a tree she'd had to have cut down which she had planted decades ago.  Today Stephan turned this shallow bowl and took it to her so she could keep a bit of that tree. 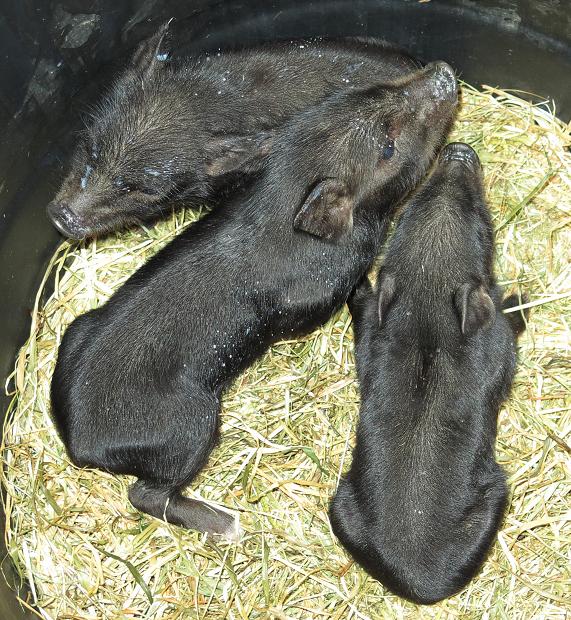 Feral pig damage is still evident on the flats and I'm concerned that this is the first year we've had pigs this far forward on the farm.  I've not had them where I plan to keep the calving cows before and that proximity worries me.  I don't know that they would cause problems, but I don't want to find out the hard way either, so took the .222 rifle and went and sat under the tree in the middle of Mushroom 2 for an hour, waiting.

At one point I heard grunting and prepared myself for their appearance, but there was nothing more.

Eventually I decided to go home for (a rather late) dinner but first went for a bit of a look around.  I spotted a black pig across the stream in the Bush Flat.  Then the rifle jammed and I had to eject all the bullets and had only one in the breech when I shot her.  I would have shot her again to make sure, if that problem had not occurred.  She slumped, but then got up and ran off!  As she did, a scatter of little black things emerged from around her.

I went looking for any sign of the sow, but could find nothing.  Three tiny piglets were snuffling around in a confused state, not sure where to go.  I phoned Stephan (we have better and better cellphone reception these days) and asked him to bring a feed sack to carry the piglets and the .22 rifle (in case there were piglets we couldn't catch) and we caught them and took them home.

They were very young and I tried feeding them some warmed milk (splattered all over them in the picture), but they were frightened and even with their snouts pushed into the milk, didn't take any.  We left them covered and warm in this drum with hay in the bottom, pending a decision on their fate in the morning.

After some consideration about the piglets we decided that because they're feral and not as good pork producers as domestic breeds, because we aren't yet milking Zella and because we don't really have time to mess around with taming these frightened babies, we would humanely and quickly end their lives.

If you think it would have been nice to leave the babies out in the bush to have a bit of life, you'd be wrong: without milk from their mother, they'd have starved to death slowly and I wasn't prepared to leave them to that fate.

I moved the trail camera to watch the Putangitangi nest tree and there were a great many pictures of rabbits, coming and going from the burrow in the soil in the hollow base of the tree. 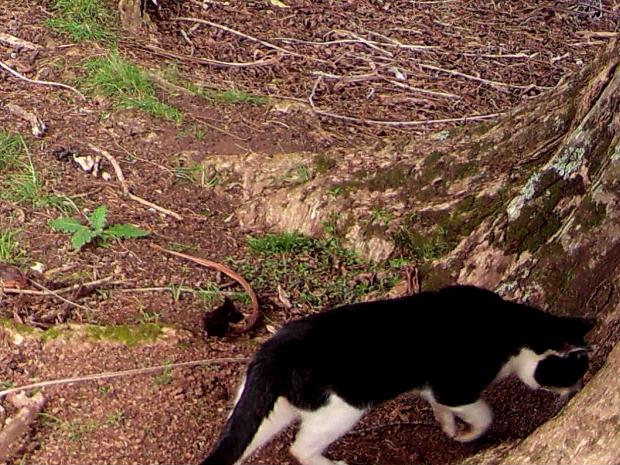 But then this, another cat.  I wouldn't have thought that colouration would occur in a feral cat of many generations' breeding.  Perhaps some dumped strays make their way out to the back of the farm to join the feral population.  Cats certainly have a wide range and will travel many miles when they want to.

We went to town this afternoon and I went birthday shopping (it's still September, still 2015 ...), firstly an odd sort of gift-to-self, a Shingles vaccination.  A friend recently had Shingles and it was painful and debilitating and went on being awful for many weeks.  Apparently our immunity gradually drops (most of us had Chicken Pox as children) and the latent infection can re-emerge and so the vaccine is available to anyone over 50, although not subsidised and not often taken up in this community at $200 a pop.  But there'd be no point regretting not having spent the money when it's too late ...

Then, while Stephan was still in the gym I went to the local chain sporting goods store and got a guy to show me some rifles.  He was touting a good deal and then I looked behind me and noticed I'd backed into a calendar of a very attractive young woman in a very brief bikini holding a very large rifle.  I told the guy I'd come back and buy from him if he got rid of the sexist crap out of his store but as I found it offensive, I would now leave.  (I'd gone in there to do a bit of pre-purchase research so I'd have some comparative information, but I might have bought there, had their prices been irresistibly competitive with the independent local vendor, which they weren't.)

Up the main street I went to Rider's Sports where Mike showed me his rifles, with the very funny assistance of some guy who was in there buying fishing gear and who also did quite a bit of shooting.  I bought a .223 rifle and Mike says he'll sight it in for me this weekend and I can pick it up next week.

That was quite a thrill: I've never bought a firearm before! 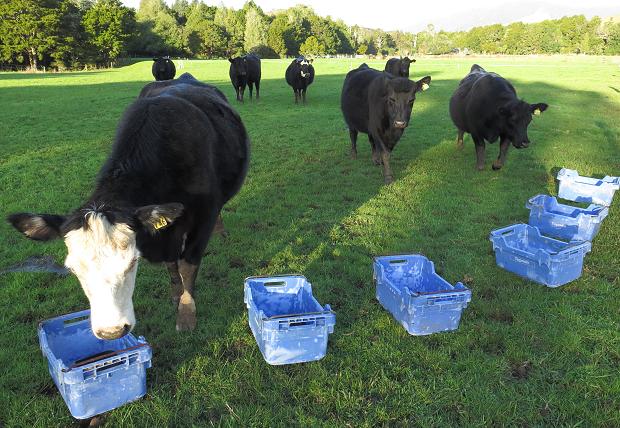 I've started Magnesium supplementation to the pregnant animals: Magnesium Oxide (MgO) powder mixed in a little water, then Molasses added and dished out to them in individual bins.  In the older cows that does not necessarily mean that everyone gets her own share because some scoff it down as fast as they can, then push others away from their bins and have that too.

But the first time the heifers are offered it they're very tentative, sniff it and draw back as if stung, before usually venturing the tip of a tongue to investigate further.  Once hooked on the stuff, they're hooked for life.

A few animals never like the taste and they just have to manage without the Magnesium.  In general beef cows don't really need it, but it makes them feel a bit better when their metabolisms are changing fast as they approach calving.  Even a slight deficiency makes them jittery.  Magnesium is crucial in the mobilisation of Calcium in the cows' bodies as they prepare for lactation.

The deficiency is usually caused by there being not quite enough grass and cloudy weather depressing the uptake of Magnesium by the pasture.  Dairy farmers dust their pastures with MgO powder just before the cows are allowed in to eat it; but I find this method works well for the relatively small number of animals I deal with.  While there, I do a check on udder tightness and pelvic ligament looseness to estimate whether calving time is approaching or even imminent. 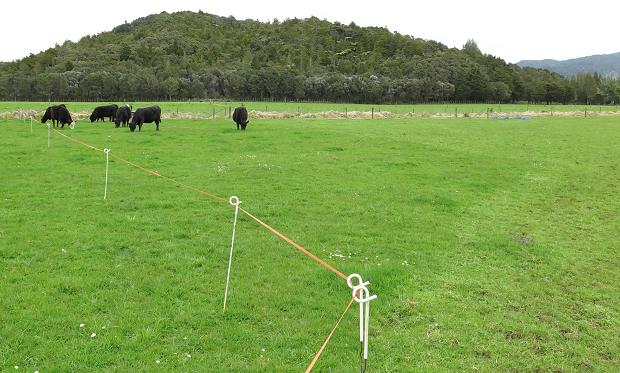 The grass is still hardly growing, so everyone has to manage on just a bit less than would make them really comfortable.  Fortunately I seem to have done a really good job with the young heifers and they're all in very good condition for calving. 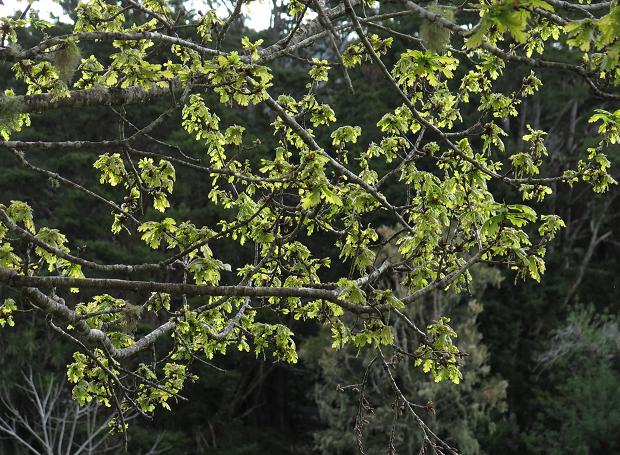 Signs of spring are around though, the Oak tree out the front now sprouting its beautifully green new leaves. 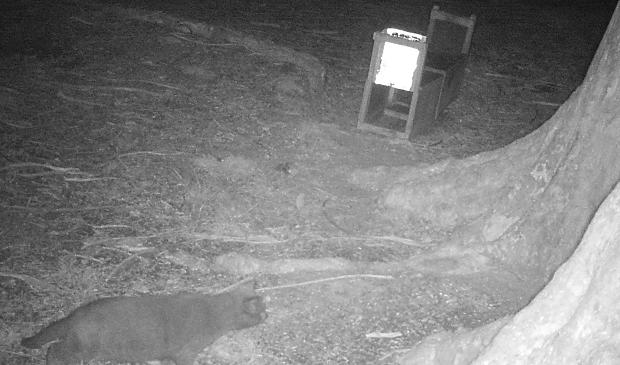 Stephan set a couple of live-capture traps near the big tree and a kill-trap, which were ignored by this black feral cat I presume is the same one seen earlier in the week. 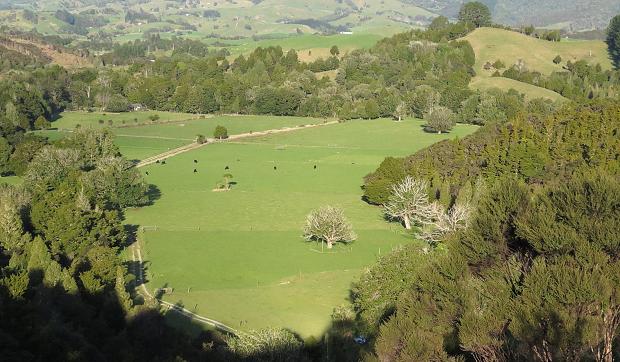 I walked up around the Big Back paddock today, looking for the bulls, eventually finding four of them almost back where I'd started.  I will assume the others were just in the trees, rather than in holes and will check again in a day or two.

I always like this view down from the ridge between the Big Back South and the Small Hill paddocks.

We don't have a cat.  There must be yet another dumped stray around, to have ventured up onto something so definitely human-related.  There are traps set all around the place but it seems to take a long time to catch cats.