The week beginning the 26th of September 2015.
Saturday the 26th 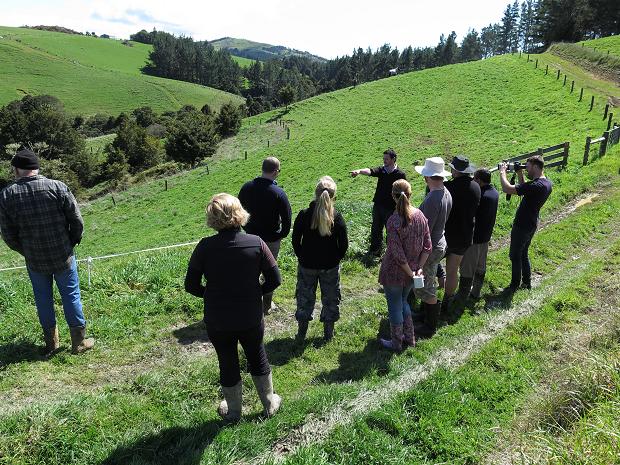 After a very early check on the cattle, we drove two hours south for a farm field day for members of, and anyone else who'd seen the day advertised on LSB (the Lifestyle Block website, whose name pre-dates and has no connection with the magazine for which I write).

The formal part of the day involved a fencing tips and tricks demonstration from a representative of one of the fencing supplies companies, who really knew his stuff, having been fencing since he was a youngster.  Even Stephan picked up some useful new ideas, including how to solve the problem of tingling (or even shocking) steel gates, about which I regularly complain in the winter when conditions are wet, a better method of tying off wire at the strainers and more about testing the earthing system for the fence. 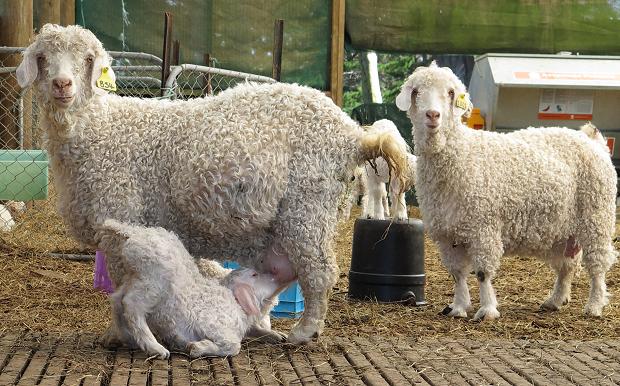 The rest of the day was social time over lunch and then a trip across the gully to the goat shed where the Angora does are still in the process of kidding.

Most of the does were outside grazing or lying around in the sun and most of the kids were inside the large shed, out of the cold wind, with their mothers occasionally visiting to provide food. 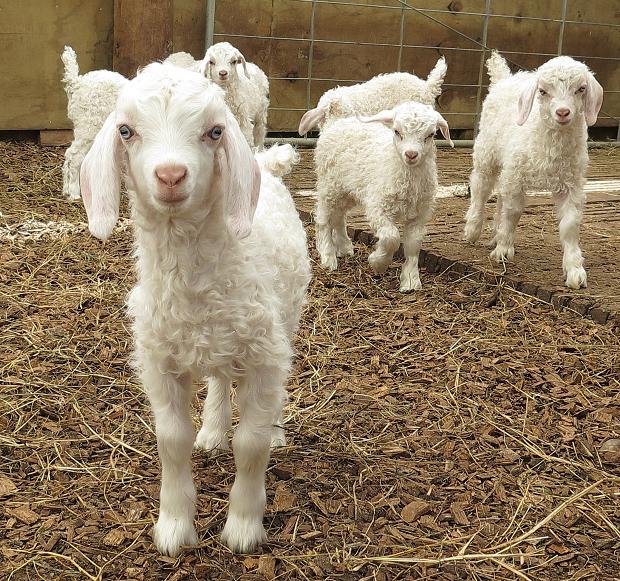 The kids were gorgeous: curious and reasonably unafraid of their enthusiastic visitors.  I crouched down near some of them and one in particular came and climbed me, until I grabbed her for a long cuddle, about which she seemed entirely happy and I decided I should definitely bring her home.  Kate said no.

We came home, I did a quick trip around the cattle with their Molasses and Magnesium and then we went in to town to a fund-raising Ball for the Switzer retirement home.  We had decided that being prepared to donate the ticket price in any case, we were under no obligation to stay longer than we wanted to, so came home around nine.  For people who work together during the week, attending a function with loud music and dancing must be great fun; for those of us who work alone and have little social contact, it's not quite as satisfactory because there's little opportunity for conversation.

Daylight Saving began today so the clocks were all put forward by an hour: two became three o'clock in the morning.  We'll spend the next few days feeling oddly confused by the time but will gradually get used to the shift.  Even though we usually carry some means by which to tell the actual time, because we're outside we tend to maintain a sense of the clock time from the light and the daylight saving shift throws that out for several days.

While hanging washing on the line I heard the first Pipiwharauroa, Shining Cuckoo, in the trees. 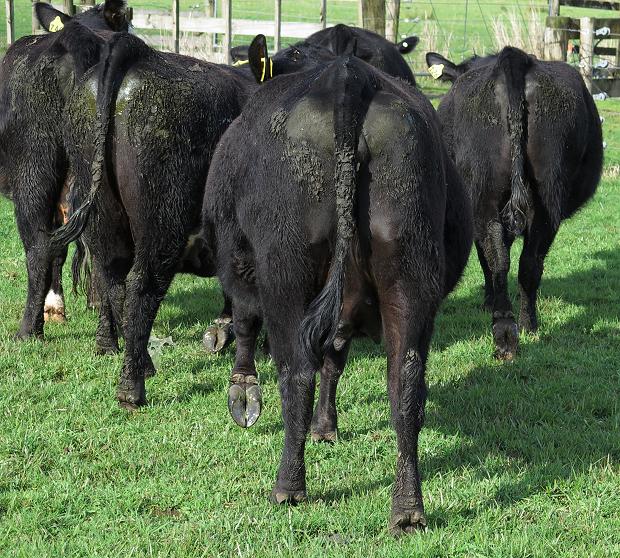 These are the pregnant heifers' well-resourced bottoms, with which I am very happy.  Some people might be disturbed by the amount of muck around their tails, but I am not.  If intestinal parasites are causing the shitty rears, the animals are obviously coping with them well and can carry on doing whatever it is their immune systems are now primed to do.

Below is my Calving Date sheet, a copy of which I now carry around with me everywhere, so I can compare changes I see in the animals with the date on which I expect each one to calve.

The Year column is the animal's own birth year, Dam and Sire because I find it hard to remember them all and the Bull is the sire of the calf about to arrive.  Start and finish dates are 275 and 290 days since conception, respectively and the expected date is calculated from previous calvings or their own gestation if they're heifers.  The heifers' names/numbers are coloured blue.

Bearing in mind the infrequency with which I get any of these dates right, all "expected date" predictions should be taken with a large dose of salt. 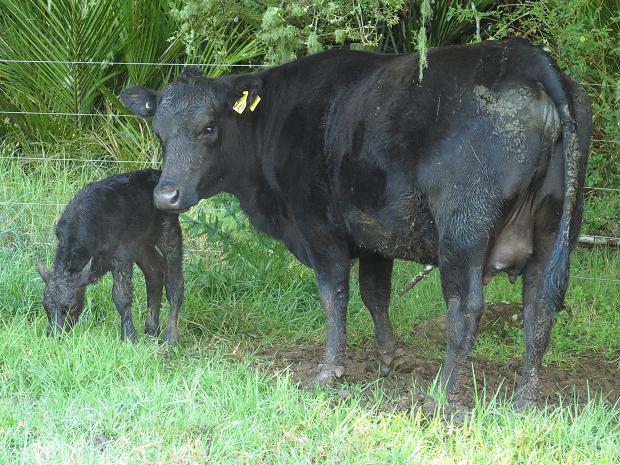 I noticed 745 separating herself from the others late last night but she didn't look like she was actually in labour yet, so I didn't come out in the early hours to check on her.

And here she is with her little bull calf, all clean and bouncy.

Her gestation period was only 273 days. 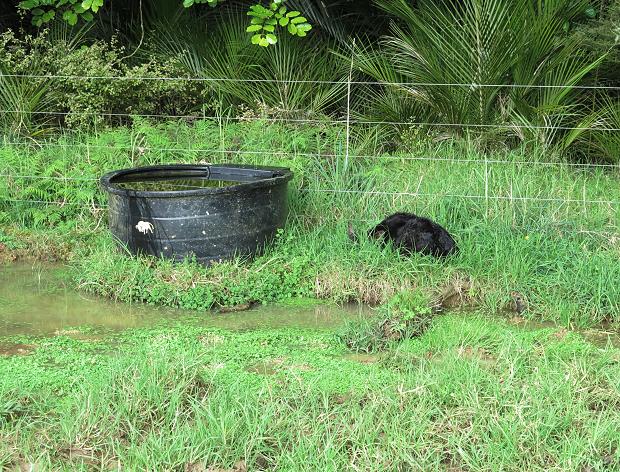 By mid-morning, 745 was grazing up the top end of the paddock with the others, having left her calf sleeping.  That's rather unusual, in my experience, for a first-time mother.  I tried shooing them all back down the paddock, but 745 seemed to have forgotten she had a baby.

The calf was safe enough though, as long as he stayed put.  I kept an eye on him to ensure he didn't wander off somewhere without his mother noticing. 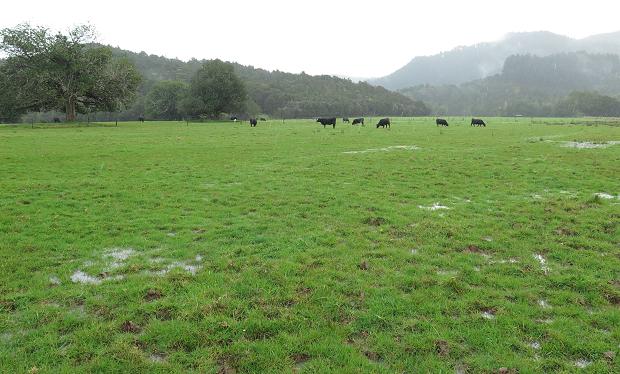 It rained all afternoon, creating great puddles of water all over the paddocks. 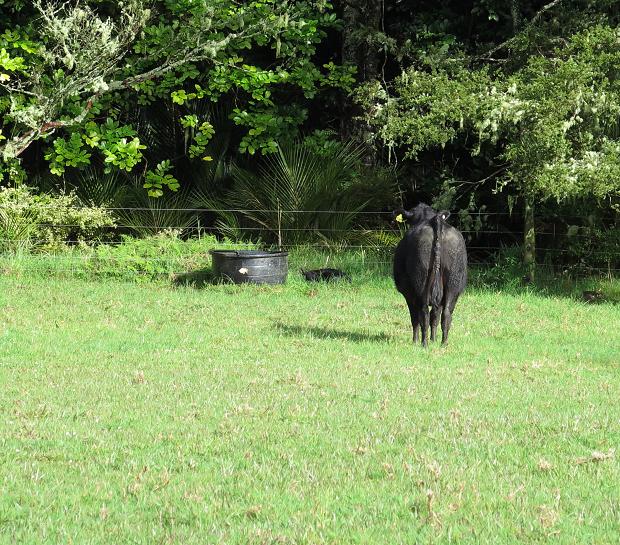 At 5pm something triggered 745's memory.  Perhaps the calf made a noise, or moved a little; whatever it was, 745 was obviously very suddenly aware of him again and trotted over to lick and moo quietly to him until he got up and had a long feed. 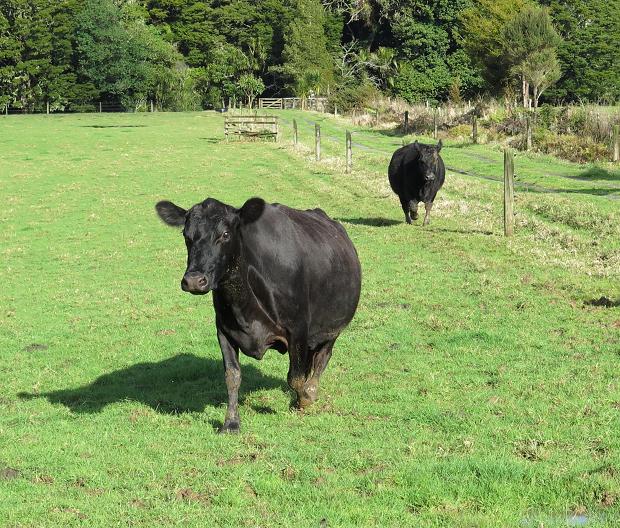 The sound of me riding my bike up the lane with a Topmilk bin full of plastic bottles sets off this reaction in Zella and Imagen: they know it's Molasses time!  This afternoon run is part of their late-pregnancy fitness regime. 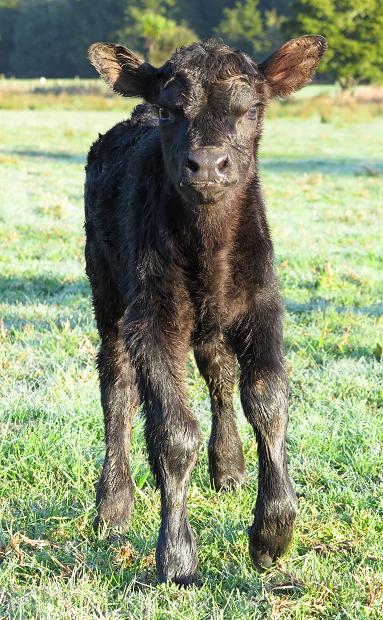 Little calf is very sweet.  It's always a relief when the first one from a new bull is born easily and nice to have started this calving season without problems.  The heifers' calves were all sired by Emergency's son, 134.

We went to town and I collected my new rifle, along with its various accessories - a bi-pod I may use at some point, a bag which I'll only use if I go away somewhere shooting things, which seems unlikely, the carry strap, some "free" ammunition and a lock for any time I need to carry it in the ute.

Thursday the 1st of October 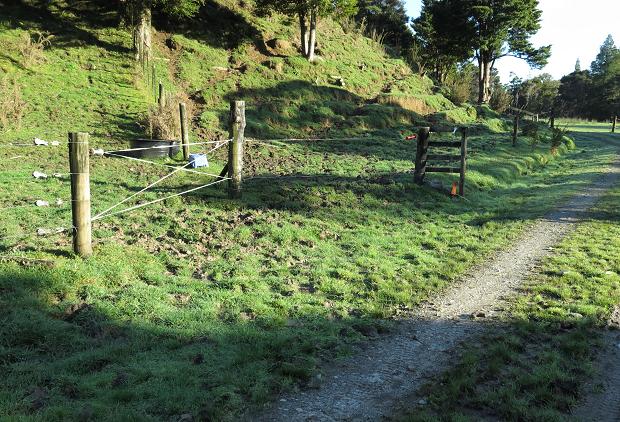 This is one of those "before" photos I hope to be able to refer back to before too long, when a culvert is installed and the drainage is sorted out.  This is a horrible boggy little entrance to the Pines on the left and the PW on the right.  In the summertime it's dry and presents no issues, but all through the winter it's horrible. 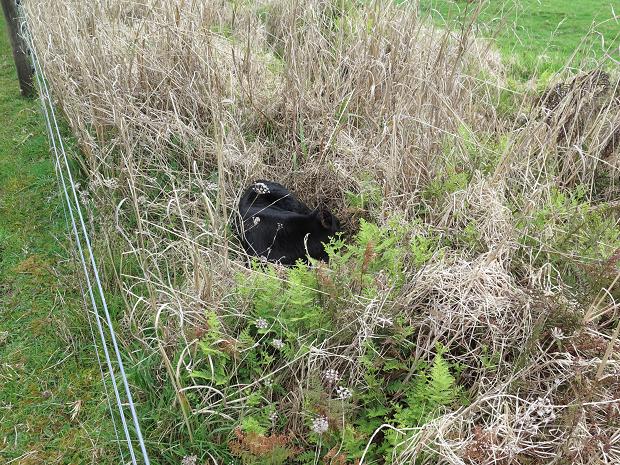 I needed to move the heifers from Flat 2 to Flat 1, but along between them runs the big, deep drain and here was the calf, through the fence in the long grass.  I had to wait until he got up for a feed and was walking around with his mother, before pushing them out of the paddock.  I didn't want to wake him in case he bolted and didn't want to leave him there or he may have tried to go through the drain to where his mother had gone. 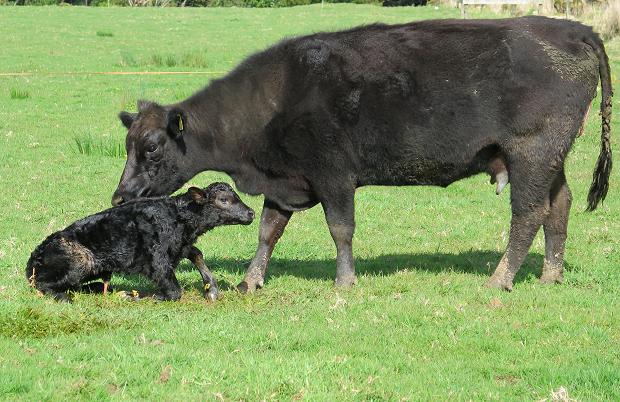 Identical twin Gem 698 produced a daughter during the afternoon.  This one was sired by Ida's son, 128, who has already gone to the works, being a carrier of the AM gene.  The calf will have to be tested at some point to find out whether or not she has inherited it.

Gem calved quite late last year, but in good condition and was obviously one of the earliest to get back in calf, as a result, bringing this calving forward by seven weeks from last year's.  Sister Meg has done the opposite. 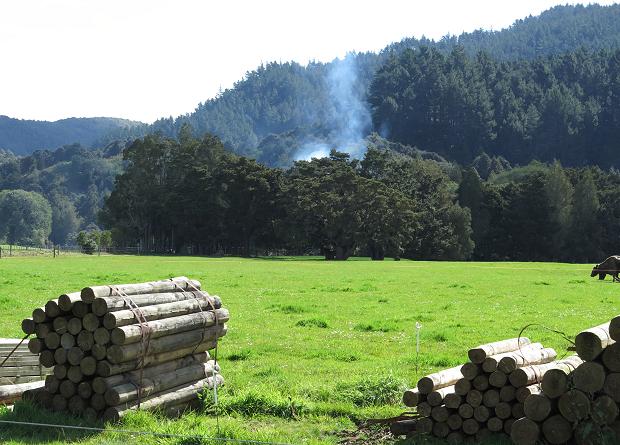 Stephan, on this lovely still day, had gone out with the scrub bar to clear some more regrowth, this time in the bit of the Small Hill paddock which is now part of the Pines. 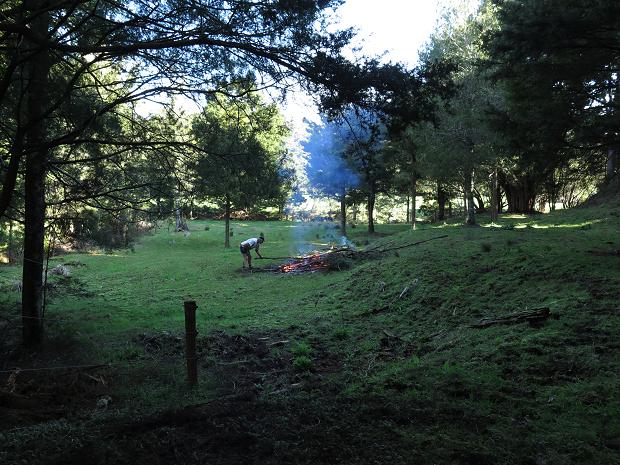 He carried on all day, then went back again to check on the fire a bit later.  With the ground still so wet, there's little danger of a fire getting out of control at present and the smoke wasn't going anywhere other than straight up. 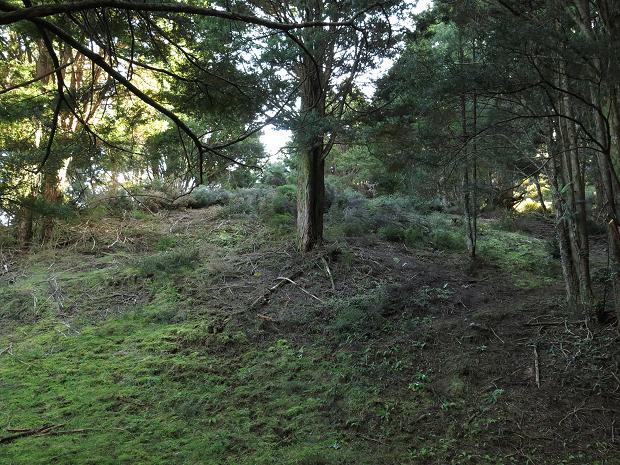 Looking up the hill at the area he'd been working on, cutting, then dragging the stuff downhill to the fire pile.  Anyone who fancies a serious and useful "get fit" programme is welcome to come and give him a hand! 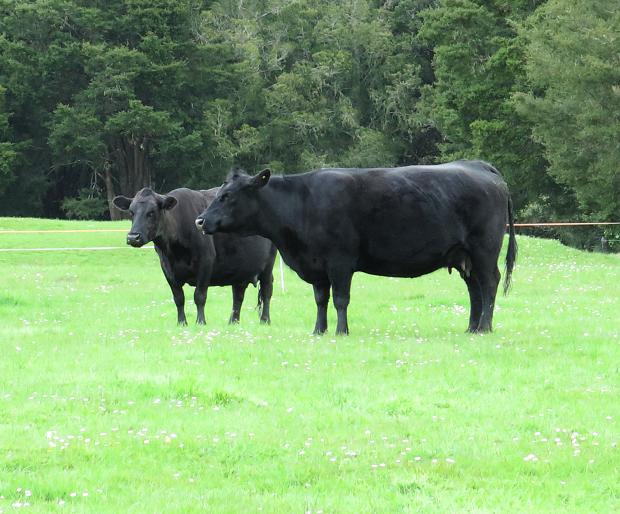 These two are lovely 475 on the left and her daughter 606.  Both have been standing around looking pensive and based on my calving date sheet, I thought they must be about to calve.  They weren't.