The week beginning the 4th of August 2018.
Saturday the 4th 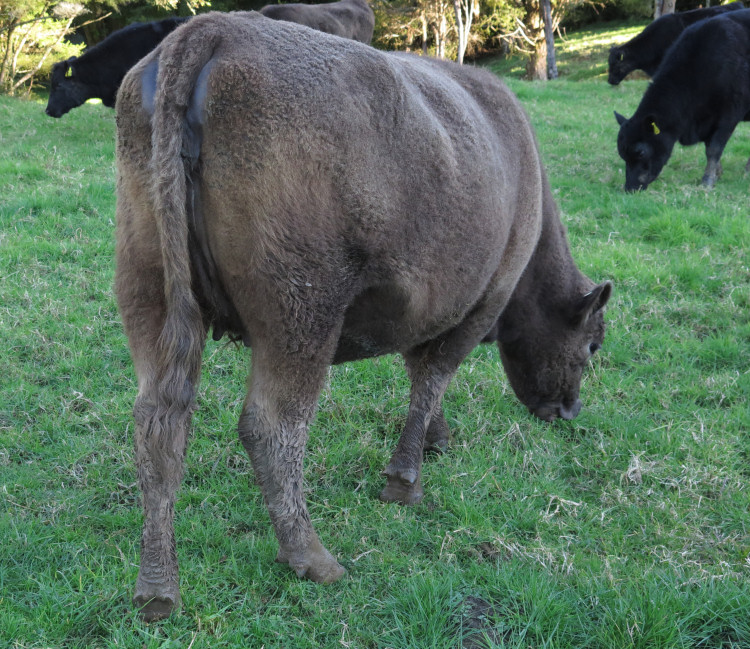 807's udder area has been changing over the last weeks.  It's fun watching the first-time heifers getting ready for birth.  807's was my first insemination last summer and she should calve in about two months.  She's in rather nice condition for a R2 heifer here in August.

She could easily get too fat from this point, if she had unrestricted access to feed.  But at this time of year, the grass grows very slowly and it requires care to keep animals like this in a "just right" state.  She is still at least two years from physical maturity herself and she is growing the calf she carries. 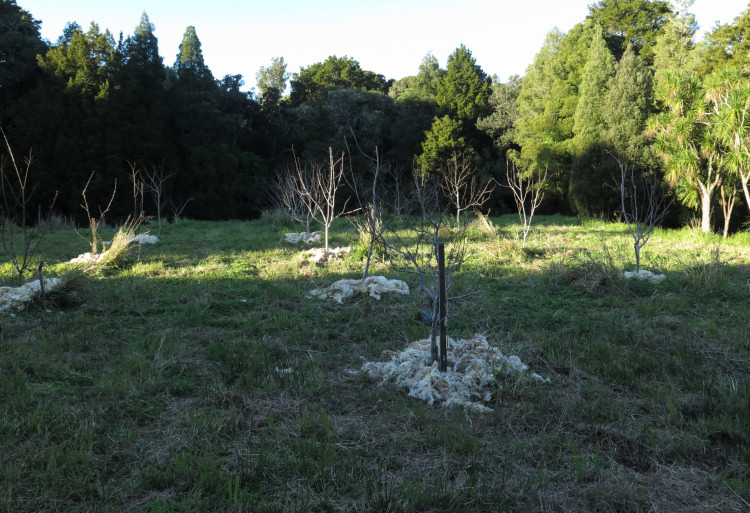 Looks like the widespread slaughter of sheep!  We had a lot of very old wool in the shed - we never get enough to sell in one year and then it gets shoved out of the way and by the time we get enough together, the old stuff is not quite up to par any more.  The last few times we've shorn have also been primarily for sheep welfare reasons, so the wool wasn't always the length it should be for sale.  But here's a use for it: mulch for the fruit trees.  We'll see if it suppresses the grass growth or creates a mess we have to tidy up later.

We'd been pruning some roses at home and then thought we'd take the pruning gear up the road and do the orchard trees.  They missed out last year, so we were determined to do the job this season.  Neither of us knows a great deal about pruning.  We're still trying to shape the young trees nicely.  Time will tell whether or not we're doing a good-enough job.  Better than nothing, probably. 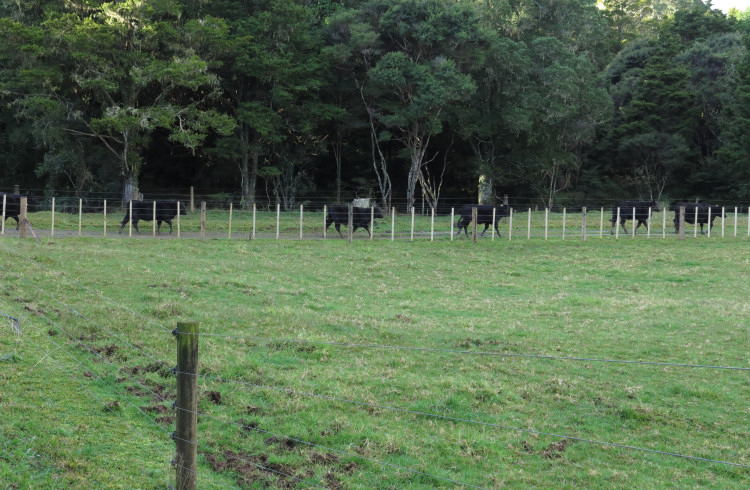 We brought Zella and Demelza in for their copper injections this morning - I wasn't game to try another injection in the field so soon after the other one or they'll never let me near them again in a friendly manner.

Then I brought the young mob in from the Bush Flat - and off they went in quite a hurry! 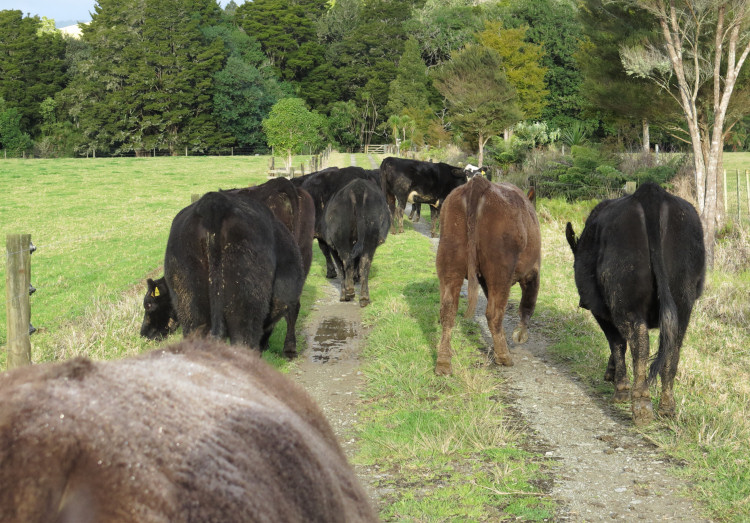 They didn't hurry all the way in though.

I am very happy with their condition so far: not too thin, not too fat.

807 refused to go up the race as usual, so I jabbed her when she was near the rails in the crush pen. 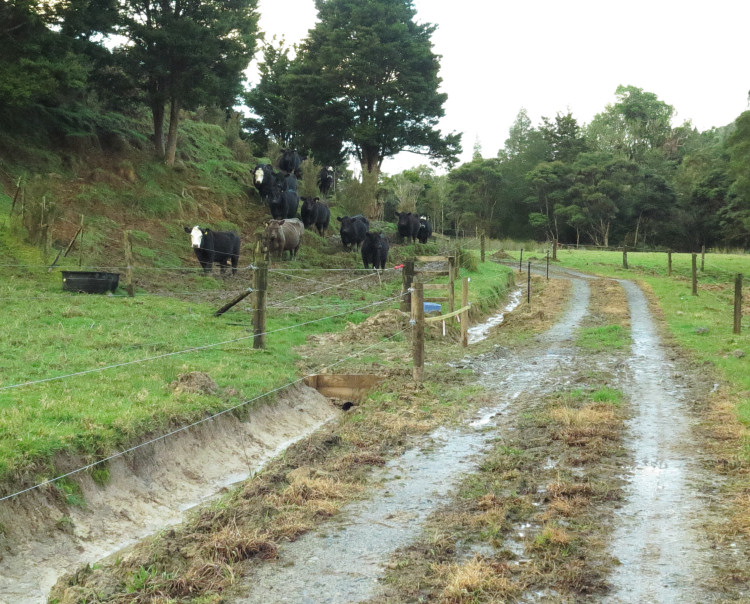 Stephan and I pushed and called this lot back along the hillside to the other gate, then let them make their way down to the front of the farm, where they grazed the driveway area overnight.

The dead grass along the track is a result of Stephan having come out with glyphosate a couple of weeks ago, to try and kill the numerous Rat-tail grass plants that have emerged from seed brought in with the track metal.

And on the subject of pest invasion, a cattle tick, on my hand, has appeared in The New York Times.  (It is a photo I took in 2014.) 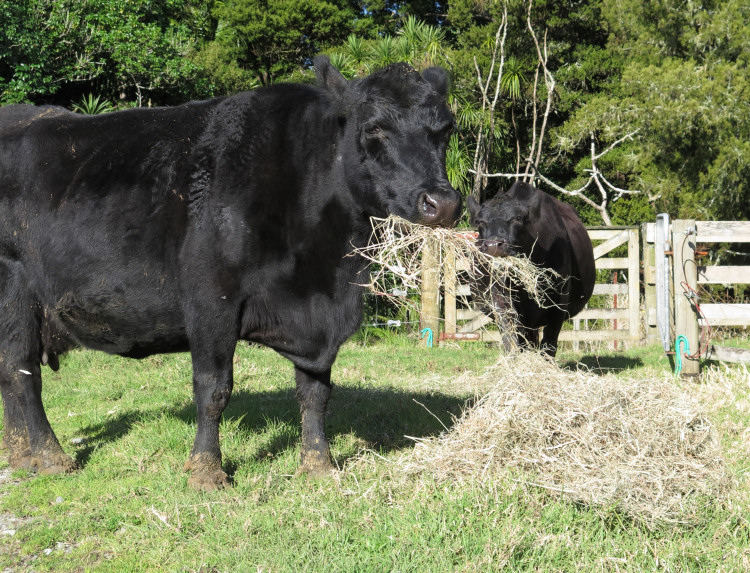 I coppered the cows first thing this morning and sent them out to the Small Hill.  That's everyone done now except for the little bulls and steer.  I need to fit one more copper injection in for the pregnant animals before calving.

Ronnie came over from Fairburn for lunch and to return our cow sling, which she's had since last year sometime, when one of her cows got into difficulty.

Later in the sunny afternoon we gave Demelza and Zella some hay on their way back out to the flats.  Look at those eyes.

Little budgie had a very active day, coming out with me into the aviary for feeding for a little while and when back in the house, flitted about happily - except for one incident that may have been relevant to what happened next.  That was that she flew directly into the fireplace as I was lighting the fire.  I grabbed her as she flew in, but she may have inhaled something she shouldn't have and these birds are reputedly quite sensitive to respiratory toxins.  She then flew off into the kitchen, landed in the sink in a bowl of water, which made her a bit damp, then managed to get under a seive, where she sat until I fetched her a few minutes later, deciding she needed to go and sit in her cage by the fireplace, where she could be warm as she preened herself dry.  When we'd finished eating our dinner, I went to see how she was getting on and found her nestled into the corner of the cage and then realised she was almost unresponsive.  I held her in my hands for the next half an hour as she gradually became more and more quiet and then died.

We both felt extremely sad.  Little bird had grown perfectly normal feathers and had been flying happily about, even outside occasionally before returning to me, but had remained tiny and had the look of an unwell bird, despite her normal behaviour.  I had been gradually reducing her hand-feeding as she ate more and more seed on her own.  I cannot know whether it was a respiratory assault that killed her or that she simply ran out of puff after an extremely active afternoon and evening.  There had always been something amiss in her constitution and I wonder if it was that that eventually caused her death.  I always thought she might not survive for very long but we'd both become very attached to her. 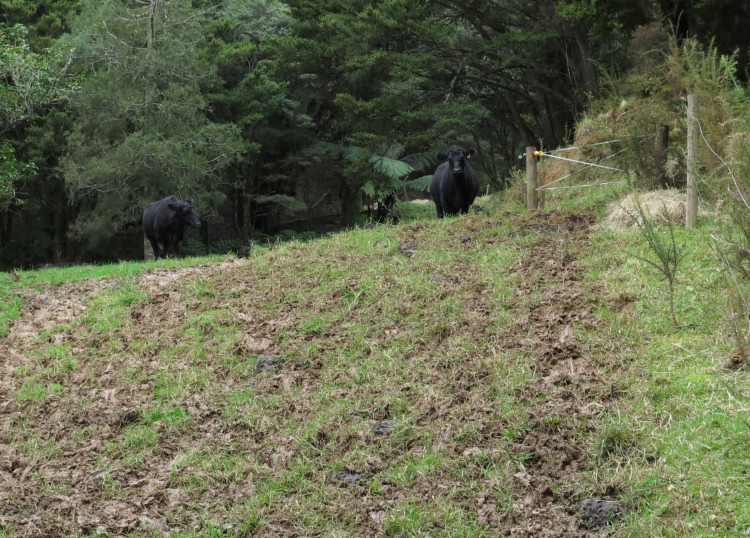 I'm trying to eke out the feed this week so everyone can go to somewhere they can remain for three days from Sunday, when we'll be away.  I took the thin cow mob half a bale of hay this morning.  They didn't approach it with any enthusiasm, so I'm glad I only took that much.  Some of them may not have seen any before - or perhaps some can remember the last horrible hay we offered them.

The current hay is from Heidi and Dave and everyone else finds it delicious.

We spent the afternoon attending the funeral of Cherrie Holder, mother of my lovely friend Cliff.  The Holders are another lifelong connection for my family.  Stephan I were invited to join the family at the farm house in the evening too, where I caught up with some people I've not talked with in decades and figured out some other connections between people.  I met the couple our visitors this time last year, Janice and Tim, went on to see after their stay with us: Janice's first cousin is married to one of Cliff's first cousins. I shut the 13 into the riverbank area late yesterday, where they had no water.  In this weather they don't drink very much and needed to come out again early this morning anyway.

It would not be difficult to put a trough here; we just haven't got around to doing it.  I usually graze this area with the Mushroom 3, connecting them across the lane here, between the two gateways. 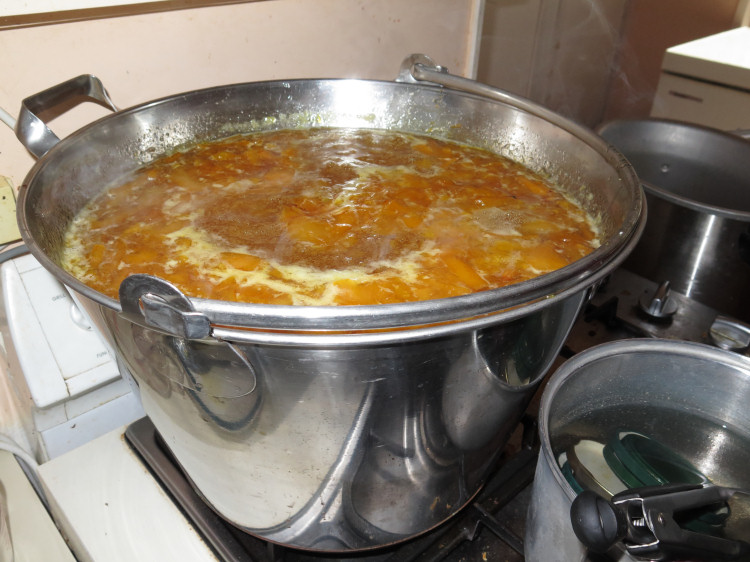 Stephan ran out of Marmalade so made enough that it seems unlikely he ever will again. 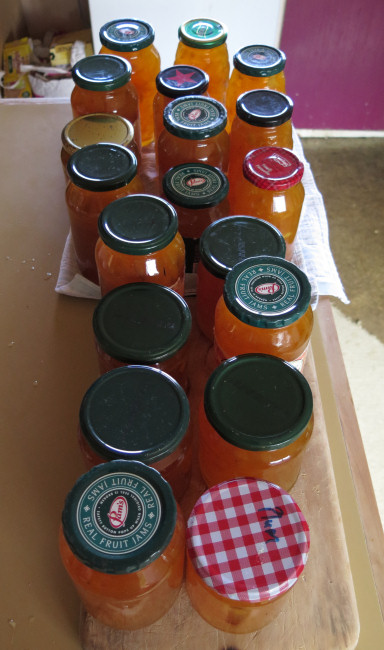 I like Stephan's marmalade a lot but take a drug with instructions to avoid grapefruit, so he'll have to eat it all himself. 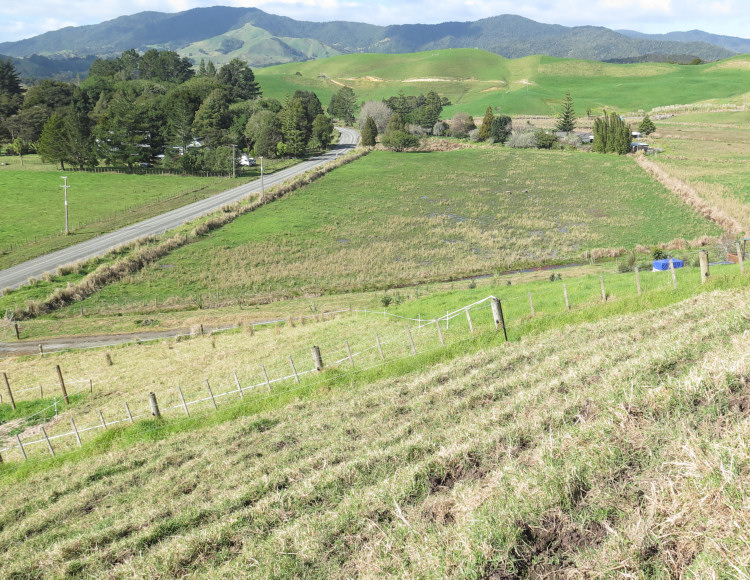 I walked over the hillside Over the Road to check the cattle there, and down to the boundary to see what was going on with this electric tape on the neighbour's place.

We talked to Anca on her arrival in her new house nearly two years ago, and she said she was going to be planting a lot of trees and would not have animals on her land.

So when Stephan erected the internal boundary buffer fence in April this year we wondered if there was any need to extend the fence right along the whole boundary but decided it would be sensible.  Now I'm very glad we did, since I had no idea anyone was going to put cattle right next to ours where I didn't expect there to be any.  But not only that, whoever this tape belongs to has attached it to our electric fence!  That's extremely impolite.

The two calves don't belong to Anca and they didn't belong to the person who put them on her hill and now we know whose they are and a conversation has been had, with assurances that knowledgeable care will be taken not to short our system out while it is in use here.  It would have been better if someone had just given us a ring: nicer to be asked first. 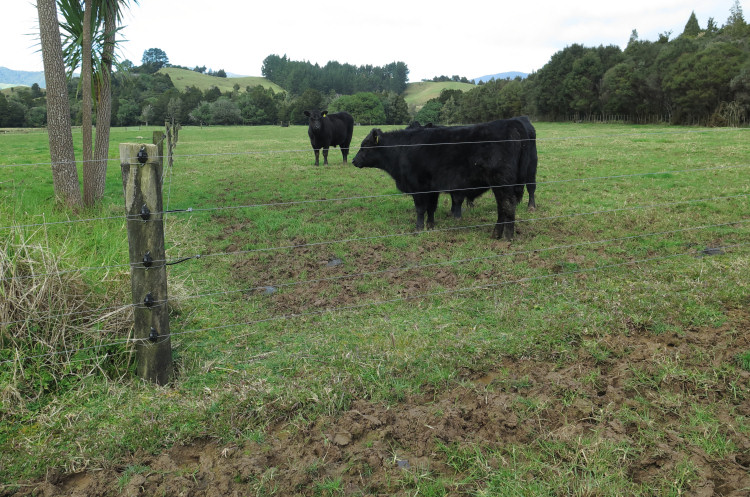 This bit of Mushroom 1 (in the foreground) keeps being really wet in the winter and I can't quite work out why.  The big bulls tramped up and down the fenceline a lot before they left, so it's a bit messy but it's wetter than I think it should be.  Maybe there's water welling up under here somewhere, not quite breaking the surface but keeping the soil boggy? 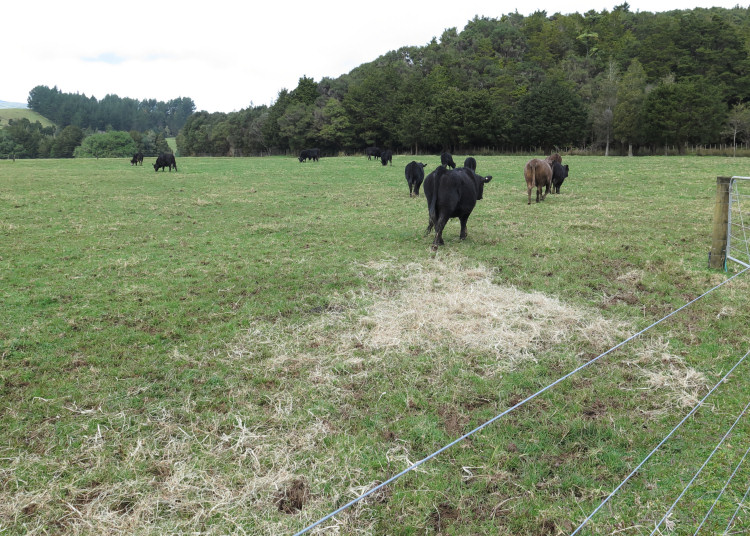 I gave the heifers some hay and then took down the electric tape that had cut the paddock in two.  Fresh grass, even though you can't really see that it's here, is always preferable to hay.  They'll come back and eat the rest of this later.