We went out to a dinner party this evening at Brian's place and met a couple we'd only vaguely heard about as new neighbours of Gaye's sister.  In conversation with them, I discovered they know my sister, Jude, quite well, since they used to run the DOC campground to which Jude and family and many of their friends flocked every summer.  It's funny who you can meet in someone else's living room. 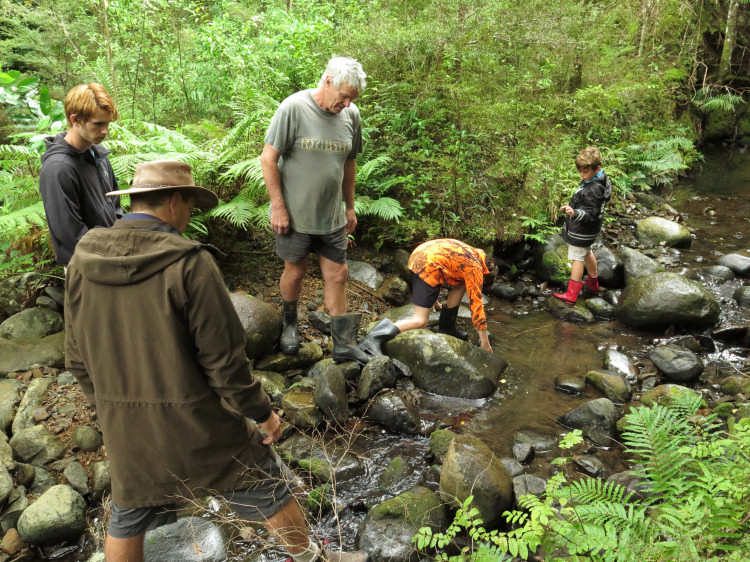 We need a rock, a special rock, for a memorial place for William, as the anniversary of his death approaches.

Mathew, Raewyn, Liam, Sean and Zandor arrived this morning and we all rode on the back of the tractor out to the Back Barn, before wandering up the stream, looking at all the rocks. 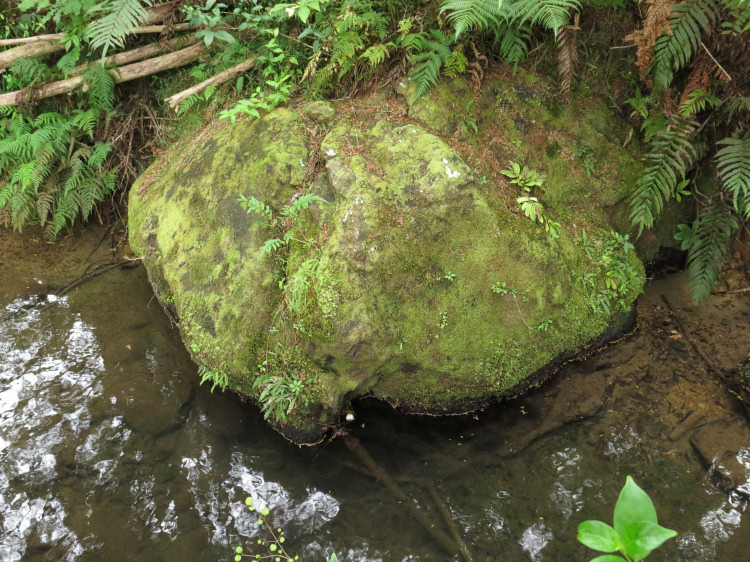 We were looking at the lovely mosses and ferns on this one (far too big to move!) until Stephan spotted the pill bottle with the white lid, floating at the base of it.

On 24 January last year, when Maihi was feeling very disappointed about being too small to accompany Kerehoma and Stephan on a trip to fix the water intake, we arranged for Kerehoma to take a message in a bottle with him, to throw into the stream up at the waterfall.

Weirdly that bottle has taken 16 months to appear and even stranger, we found it!  It must have been stuck amongst flood debris somewhere for a long time, presumably washed in and out of the stream with the floods we've had over the last year and more. 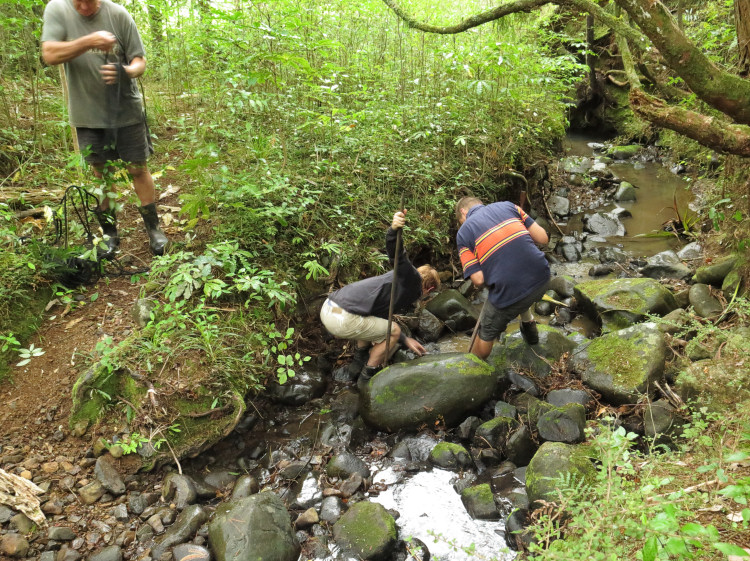 After finding a few "possibles", this rock was chosen for its lovely shape, accessibility and size - we wanted something substantial, but it had to be possible to lift it out of the stream and carry it away.  Solid rock is heavy! 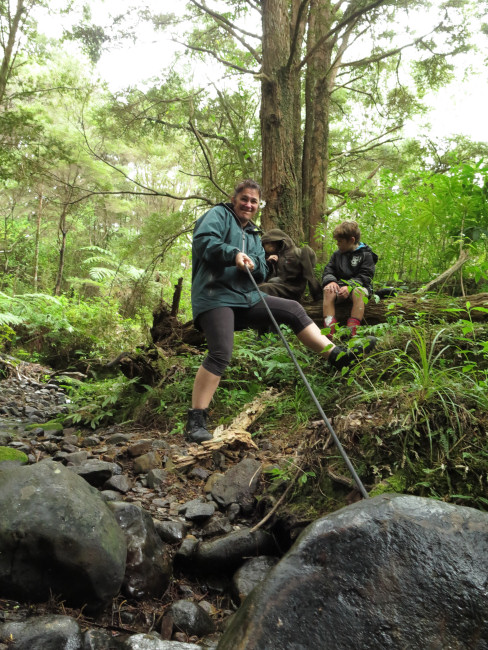 Raewyn pulled it out of the stream single-handedly.

No, that didn't happen.

Mathew and Stephan tied a long rope around the rock, took it around the base of the Totara tree behind Raewyn and while Stephan slowly drove the tractor backward, Mathew and Liam levered the rock to help it slide in the right direction, while I stood providing a hand-signal relay to Stephan when he was required to stop pulling when the rock got stuck, the rope slipped and then the direction of pull needed to be changed. 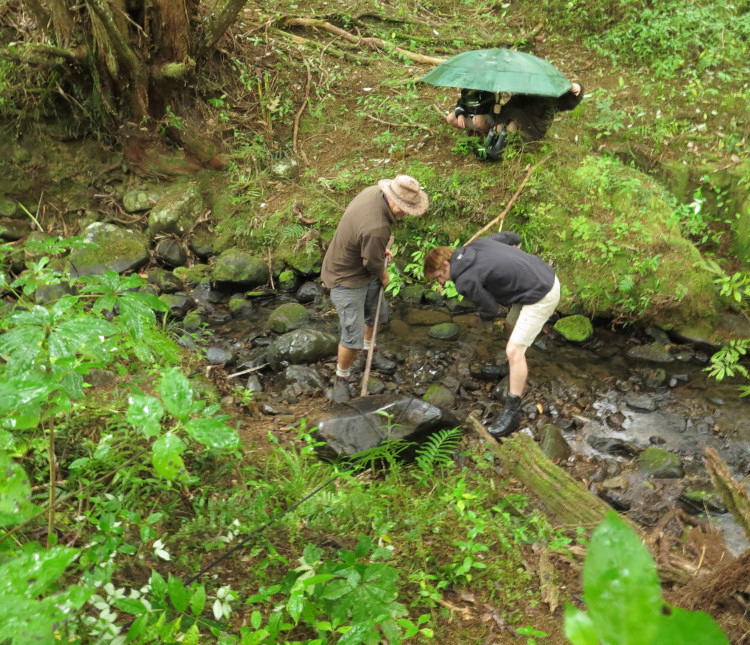 Then up the bank with lots of care to miss the larger saplings that have grown in the reserve since it was fenced.

The rain had started to fall when we got here and became increasingly heavier.  We were partially sheltered under the big Totara trees but umbrellas were unfurled by those of us without raincoats. 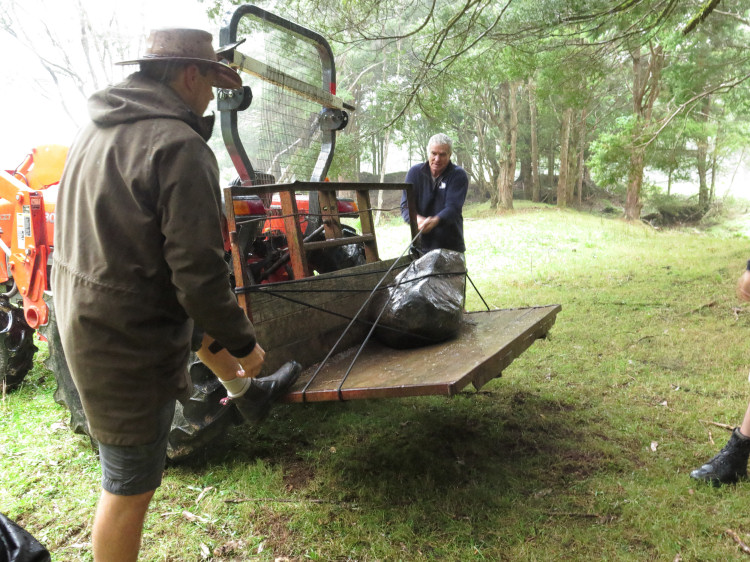 Mathew, Liam and Stephan shoved the rock on to the back of the tractor, after a trial lift with the front-end-loader made everything look precarious: that rock is heavy. 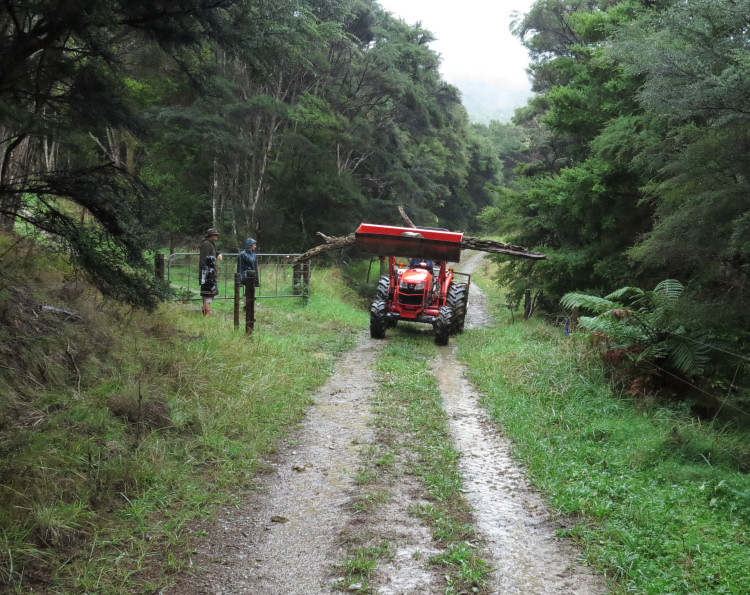 Then we all walked home while Stephan took the rock and Raewyn's new garden ornament - an ancient Puriri log from beside the stream. 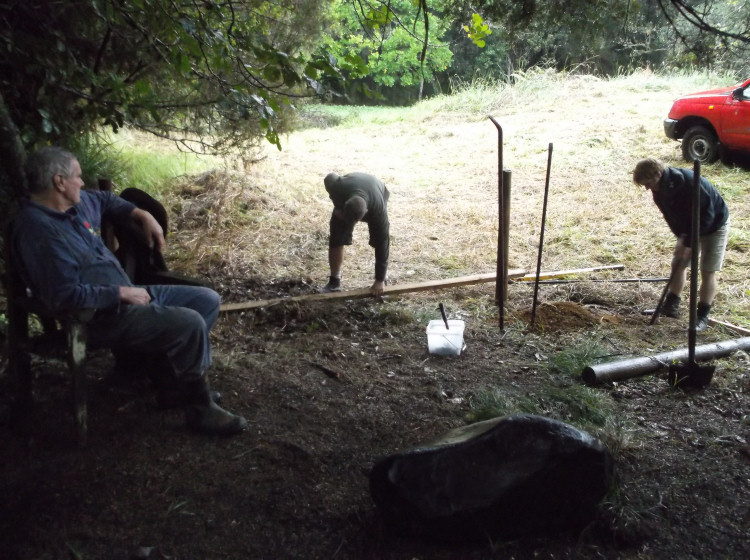 And up the road to the site beside the orchard, chosen by Elizabeth on Friday.

It would appear that Stephan took a directorial role while others worked. 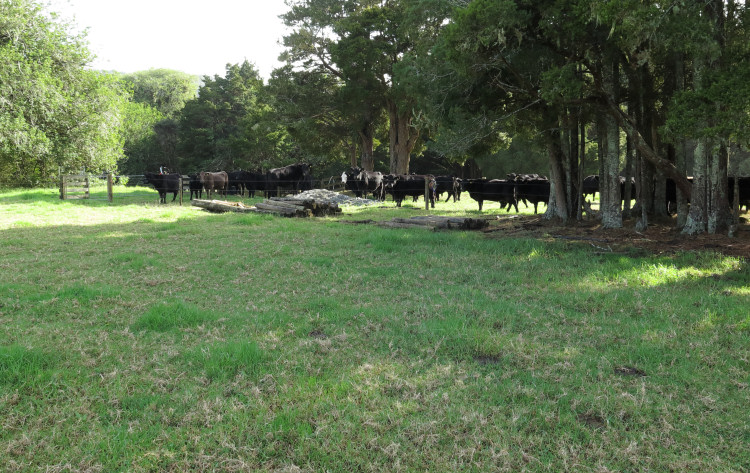 Forty-eight animals waiting at the top of the Windmill lane as Stephan and I moved some electric tapes in Flat 5d, ready for the next group of weaning cows. 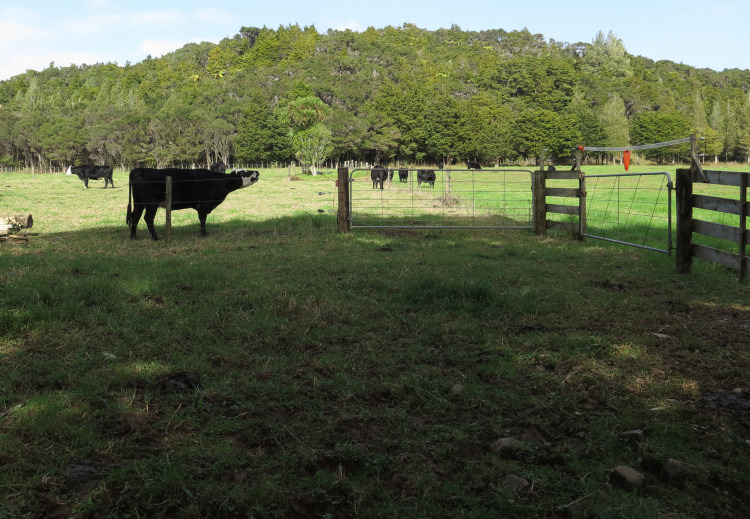 The rest of the mob went out to the Swamp paddock.  We won't wean the remaining calves for several more weeks. 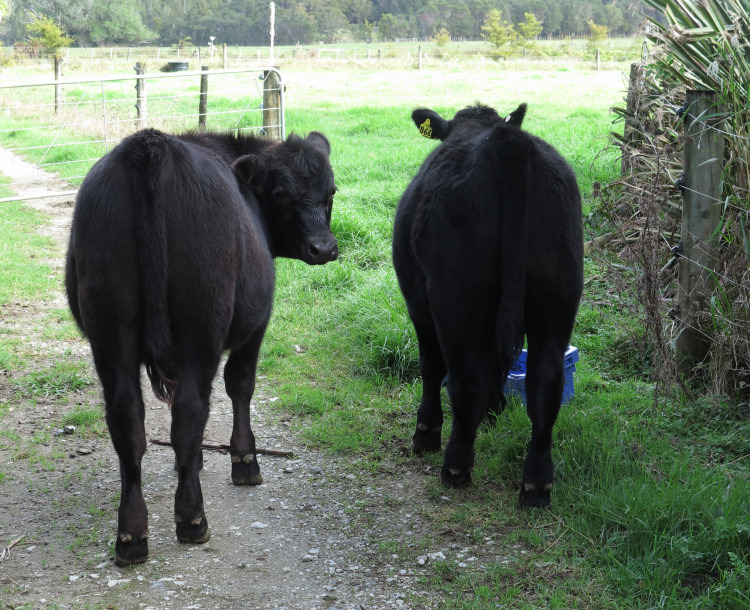 We took the house cow group to the yards and weighed them, then sent the two calves to the House paddock on their own. 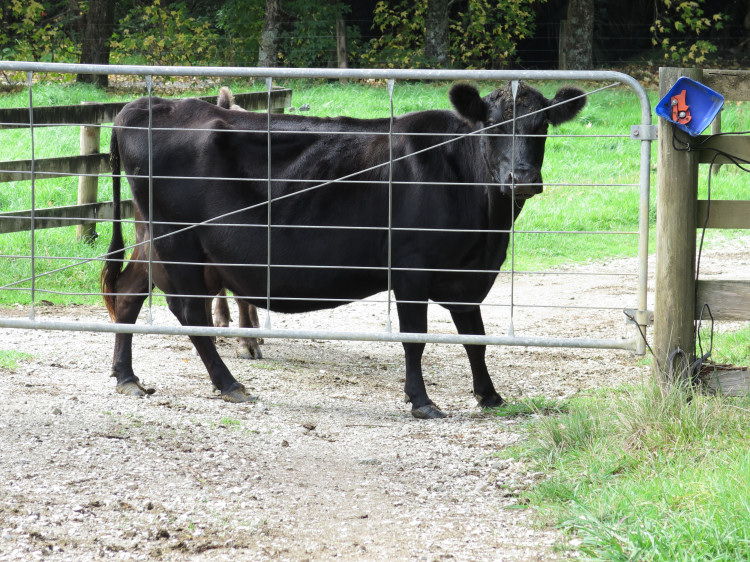 Zella was on to us.  This is, after all, the eighth time we've done this to her!

We then left Zella and Glia in the House lane, so they could graze beside their sons for the rest of the day and overnight.  Zella and her calf have always been quite unperturbed about being separated but Glia and her son were much more upset about the change - and remained so for longer than anyone else over the following days. 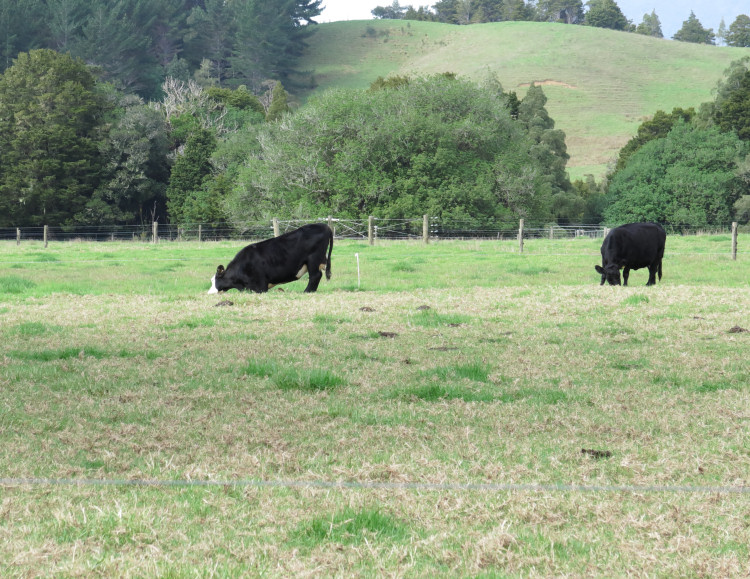 You'd think, looking at the pictures on these pages, that 746 can't walk on her front feet.

Nobody else in her family, on either side, does this.  She hasn't influenced anyone else, either.

My little electric bike came back today, brought by the bike shop who've had it there for repairs for several weeks.  Its clock now works; everything else is yet to be proven. 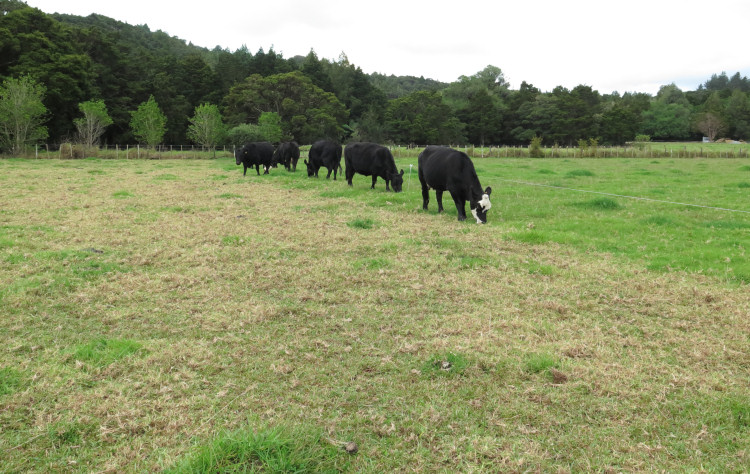 Just a little bit of fresh grass each day, so their systems receive more than one signal to stop producing milk: no more suckling and a reduction in feed availability.

I only restrict them for a few days, then they're back to eating whatever is available and this year, they'll have a comfortable rest-of-autumn, since our feed levels are still good.

Stephan spent his day hauling lime-rock out to improve some of our sticky culverts (photos to come in future pages).

I spent hours reading and then on a Teleconference call, the first work this year with my complaints committee for the Vet Council.  There has been an abeyance due to the departure of our chair and the need to find another member to join us from another committee in one case, and outside the existing committees in another.  Conflicts of interest and any appearance of conflicts have to be managed very carefully when those considering complaints are the peers of those being investigated.

Being the veterinary subject of a complaint must be a trip through the suburbs of hell.  It all takes months as information must be gathered, then considered by the complaint committee whose members all have their own jobs to do as well; then more information is sought from the same and other sources and that all has to come back for further consideration.  All the material received is then disclosed to the vet and they have the opportunity to respond to all or any of it.  The committee then looks at that and sometimes a complaint can be dismissed at that point, sometimes we arrange to meet with the vet and the complainants.  In some cases that's then the end of it but in the occasional case, the vet proceeds on to further disciplinary processes.

There is much emphasis on getting the job done in the least time possible but our personnel change has unfortunately added many weeks to the processing of our current cases.  It also meant I had to sit and review everything, it having been a long time since I last read the material and I needed to ensure I'd not forgotten anything. 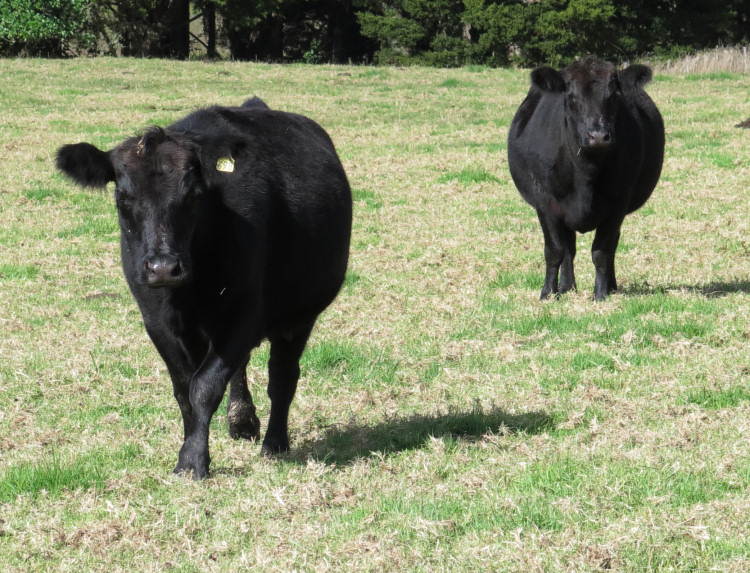 The twins, Gem and Meg, coming toward me and the open gates to Flat 5b.

I'm taking photos of them together whenever I can, since they will not be here for much longer.  I have always enjoyed watching this pair, with their identical appearance.  They don't just look the same, they are the same.

I've been checking the weaned cows regularly, watching for unusual udder swelling or lameness due to udder pain and have seen none.  613 is in this group and she was painfully affected by mastitis after weaning last year.  She's now past the equivalent time-frame so she's probably ok.  She's been on my cull list for this year, partly because of the mastitis last year; but she produced another fabulous calf this year (the fat-bottomed steer shown five weeks ago) and her daughter, 729, has failed to maintain her pregnancy, so I've begun to think I might keep 613 for another season.  She's in calf to bull 178 and her calf would be that bull's only progeny for the year. 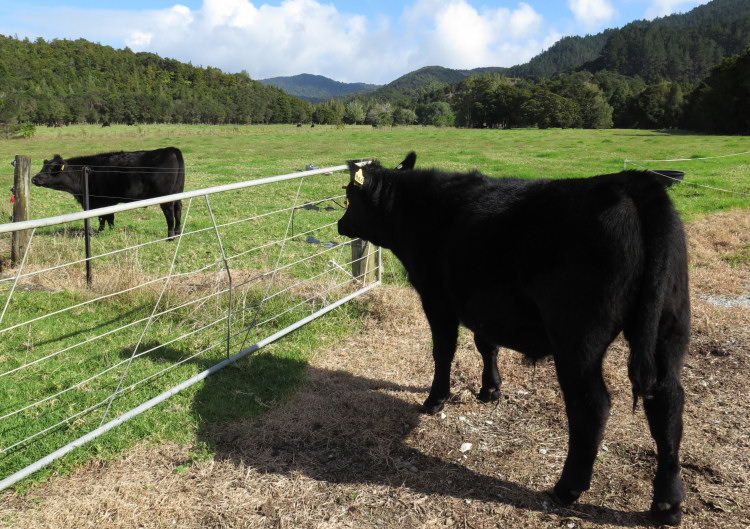 After three nights of separation near their mothers, it's time for Zella's and Glia's sons to join the other calves a bit further away.

They were unwilling to go much further than this to begin with but I think they must have met up later with the others for a bit of introductory fighting, because one of the other steers appears to have been bashed in his upper hind leg area.  He must either have been bunted, or knocked into a tree trunk up the top of the paddock.  I think he's just a bit bruised but will check him carefully again tomorrow, in case it is worse than that. 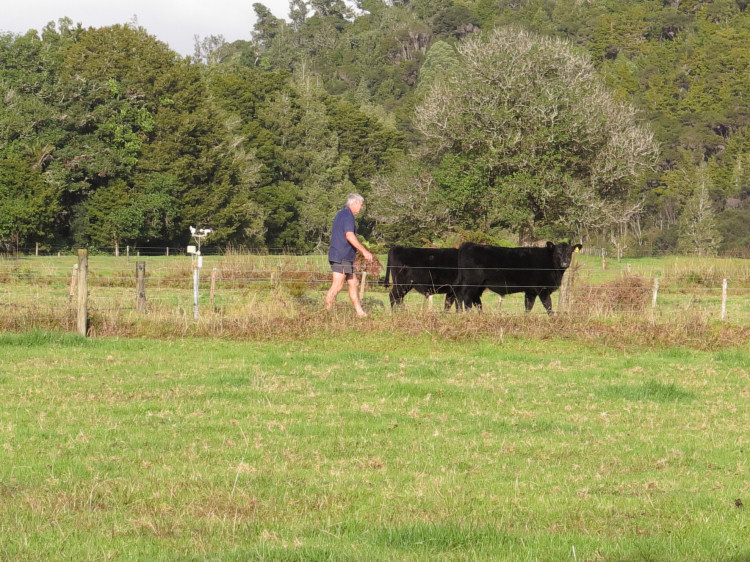 Washing the milk bucket at the sink this morning, I looked up in time to see these two making their way down the House lane.  Stephan went urgently out, because there was only the spring gate across the lane to stop them getting back to their mothers, who were still making their way along the lane from the morning's milking.

Weaning is tough on everyone, mostly emotionally, and you don't want to undo the hard work already done, in getting used to separation.  At this age the calves don't miss the milk as much as they miss contact with their mothers. 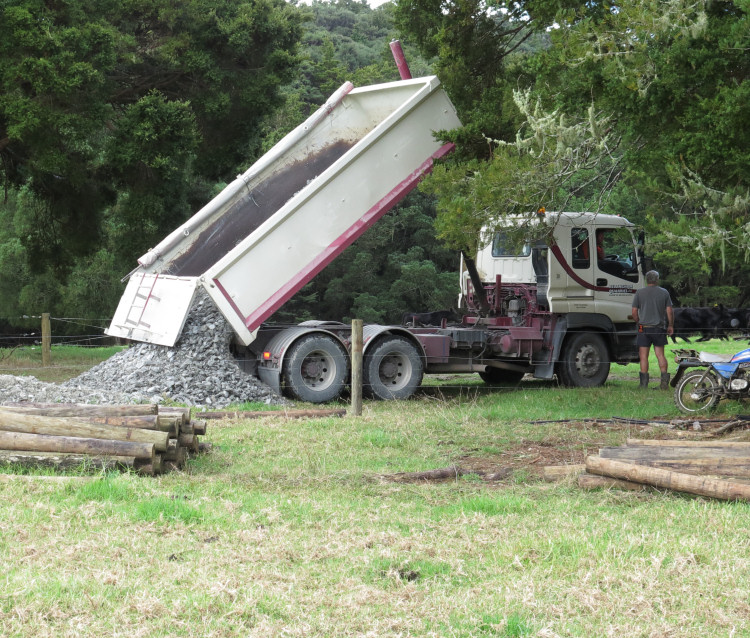 A load of AP100 lime-rock being delivered and, in the background, 20 calves running away in alarm at the sudden noise.  They'd previously been standing, curiously watching the truck as it manoeuvred into position. 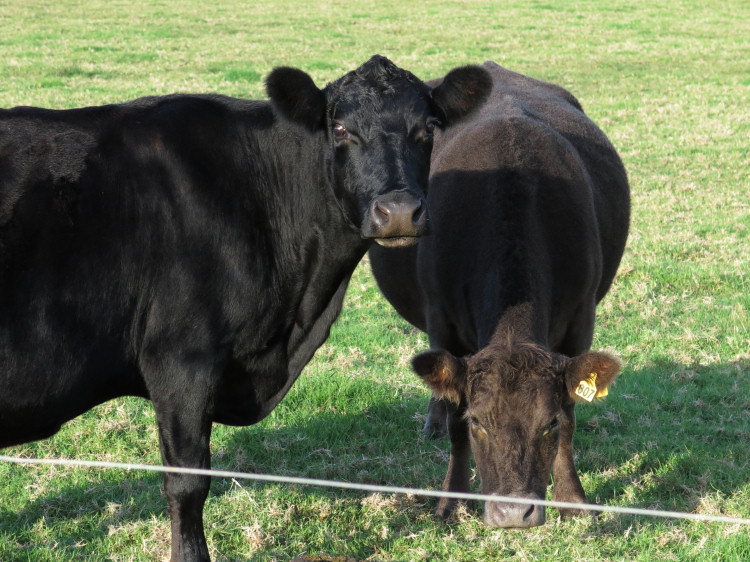 Zella, looking like I'd caught her in the commission of some heinous act.

Glia has her head down because as I came toward them along the lane, Zella was licking her neck. 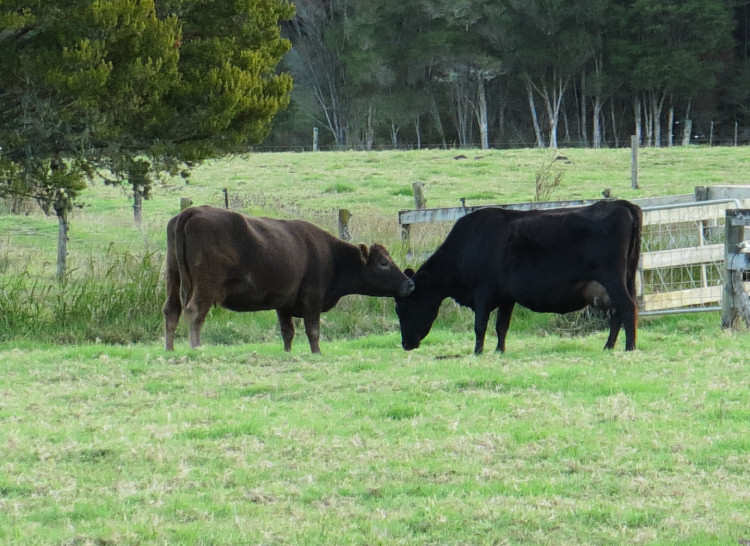 I watched them as I rode away and around the corner.  Zella didn't return to grooming Glia but instead, lowered her own head and waited for Glia to lick her.

They signal their wishes to each other in this way all the time and I love watching them do it.  What I can never fathom is that such acts of apparent affection and caring are interspersed with violent shoving and head butting at other times.