The week beginning the 8th of June 2019.
Saturday the 8th

The weather was squally and cold with very strong winds, so we hunkered down inside. 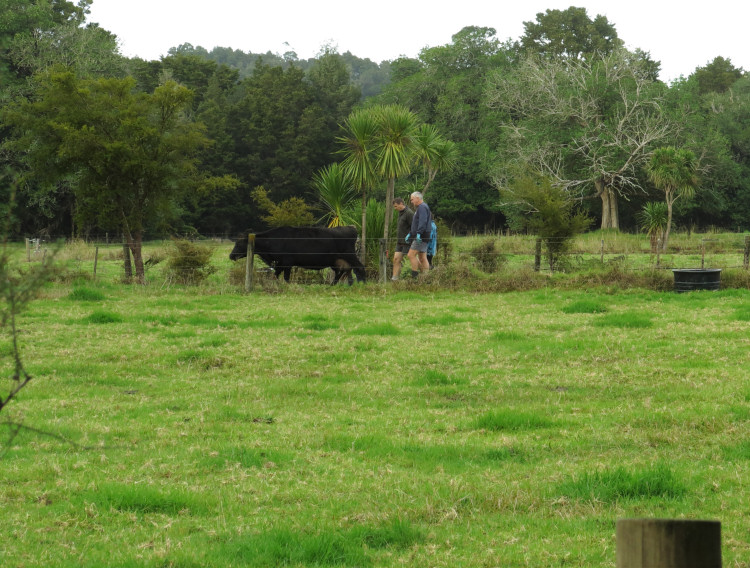 We want to be away next weekend for our first noho marae (a two-night Marae stay with our te reo class).  We'll only be half an hour away but we'd have to get up very early to come home, milk Zella, and get back there again before the day's activities begin.

Raewyn and Mathew said they'd love to come and have some time on their own away from a house full of children and dogs (the older offspring can look after the youngsters and the dogs) and milk Zella for us.

Mathew, Raewyn and the two youngest boys came out early this morning for Mathew's milking lesson. 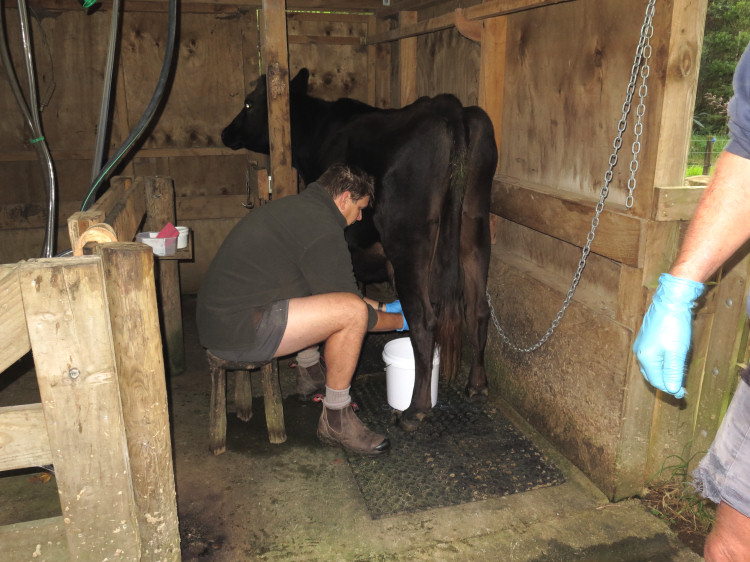 We explained our careful Zella-protection and milk-products cleanliness systems to them and Mathew milked Zella. 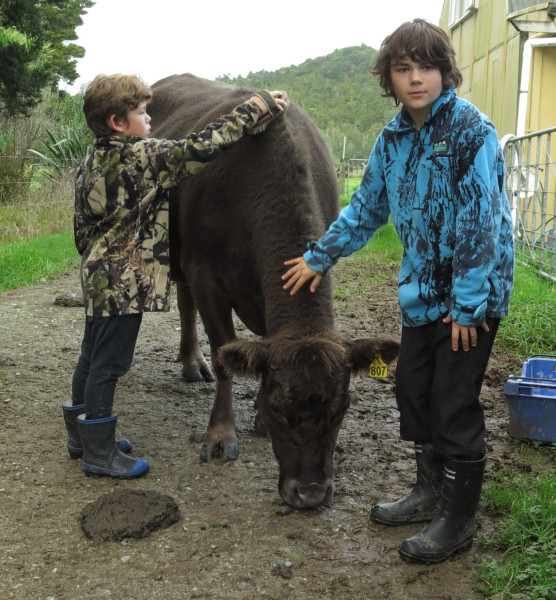 Meanwhile Glia enjoyed some attention from Zandor and Sean.

Mathew and the boys then joined Stephan out on the first section of the new boundary fence, where he had not yet properly extended the fence across the swamp - it is unlikely there will ever be animals on the other side but in case there ever are, we'll have a fence to stop them.

After they left, we had a te reo tutorial again, to which our classmate came late and having waited for him to arrive, I ended up shifting cattle as it got dark, after we'd finished.

We drove down to Whangarei for the day, visited lovely Sheila for morning tea and on our way home, drove in to Helena Bay to visit Kate and Geoff for a few hours.

The stock agent phoned today and said the cull cattle could go to Moerewa tomorrow, so I wandered out and brought them quietly in from the Swamp paddock. 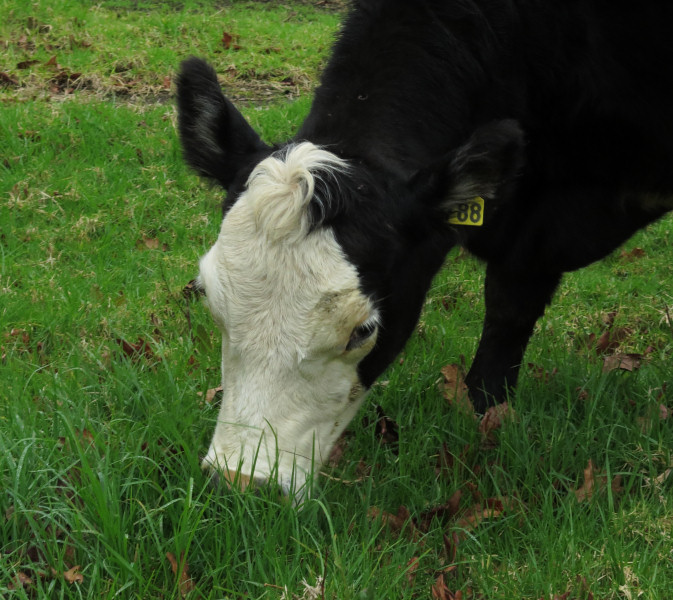 In the afternoon Stephan and I herded them up into the yards so I could paint a pink "RM" on their backs (the works and the truckies like to be able to identify groups of cattle easily by sight) and Stephan cleverly outwitted two of the three cows requiring replacement NAIT tags in their ears.  But there was no way Meg 699 was going to let him near her ear so we had to head-bail her to hold her still enough to avoid potentially hurting her.  She wasn't pleased about that either, but she got the tag I'd newly assigned to her, as planned.

Then I took some photos of them all with their NAIT tags in place, in case there's any argument from the works about their having had them.

This is 788, daughter of 746, born in 2015.  She calved at two but didn't get back in calf again and then her regular bullying behaviour led me to decide she would go.  Cows with that tendency invariably get worse and worse and I hate it when they're excessively violent with each other. 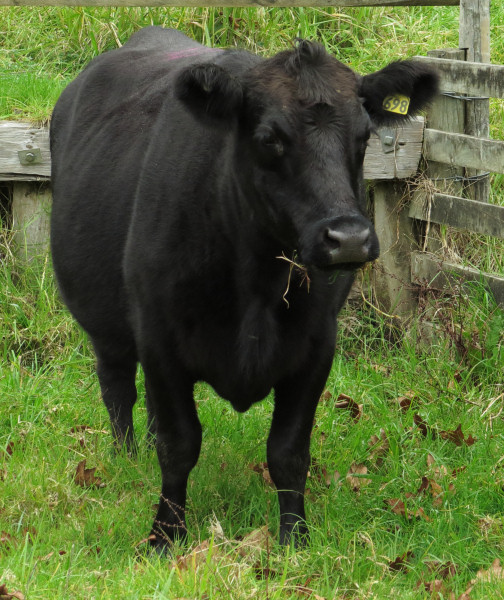 Gem and Meg lost their NAIT tags within a day of each other a couple of years ago and later Meg lost her 699 tag.  Fortunately Gem retained her numbered tag, so I could continue to easily tell them apart.

I would have been able to distinguish between them in any case but a number makes it easier.  Their paternal half-sibling 710 has quite similar features and she doesn't have a tag either, so I sometimes mistake her for one of the twins. 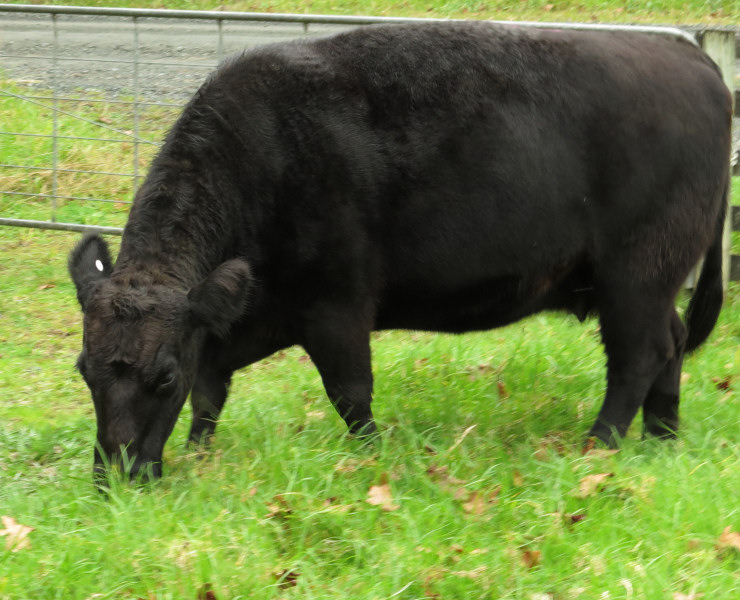 Meg, having spent the last season without a calf, has become very fat.

We left them grazing in the roundabout with access to the bottom yard for the water trough.

Mangonui Haulage's nicest stock-truck driver arrived exactly on time this morning and took the cattle quietly away.  As usual I was not there.  I do not add helpfully to the calmness of the departure with the anxiety I always feel when cattle have to go.  It is anxiety about loading, the road trip and all the potentially frightening newness of it for them, along with potential discomfort or injury.  There is no good in my anxiety but I have not yet learnt to subdue it completely.  I do not fear (for them) the moment of death, for that is quick and painless and then there is no more.

For the record, today's departing animals were: 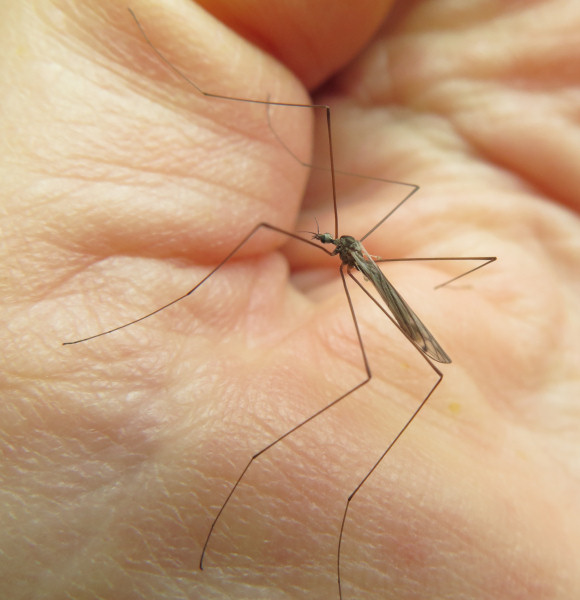 Raewyn came out for a visit and we went for a walk to move the cows and calves.

As we walked along the track below the PW, a tiny insect flew up from somewhere and I managed to get it to land in my hand.  I think it is some type of cranefly.  I didn't have glasses with me, so had to take a lot of macro photos in the hope one or two of them would be in focus. 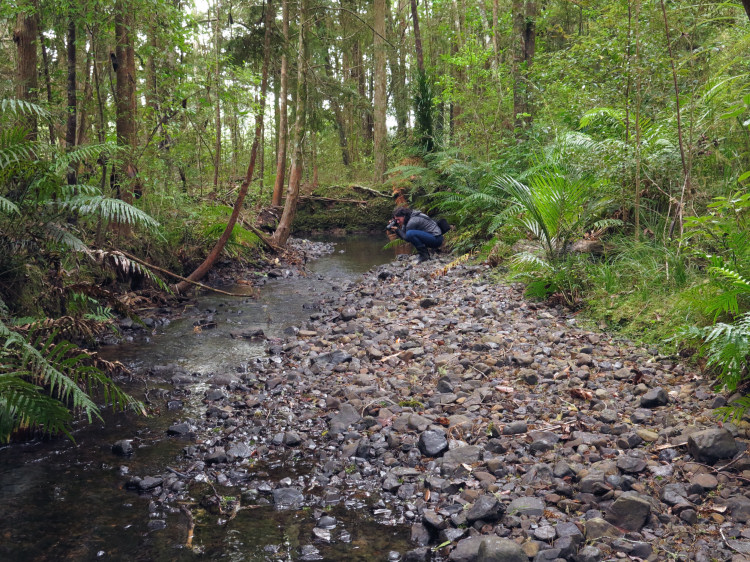 Wanting to find somewhere we'd find more interesting things, we walked around to the Bush Flat reserve and wandered amongst the trees there. 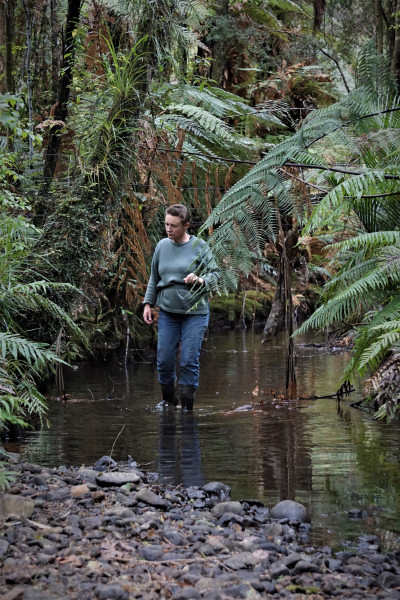 Of course a walk with someone else with a camera always carries this significant risk: getting caught in a moment of complete absorption in one's own thoughts. 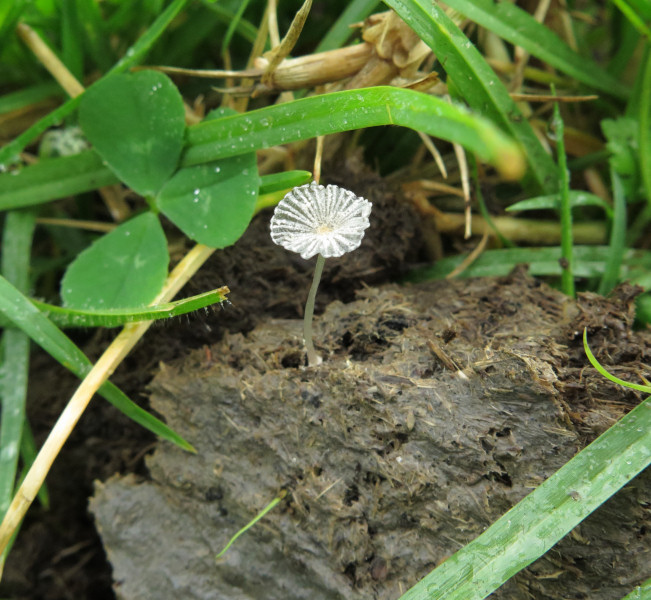 Walking across the Bush Flat on our way home for lunch, Raewyn spotted this tiny fungus.  It's delightful exploring with someone else who also sees the tiny things. 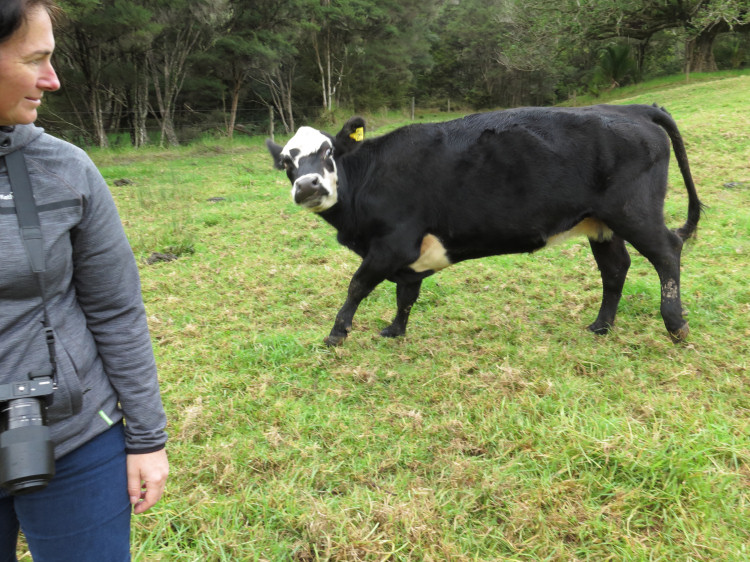 As we walked down toward the gate, where the cows wanted to go, Dreamliner 787 bounced her way around Raewyn and with my camera still turned on, I caught her in the act. 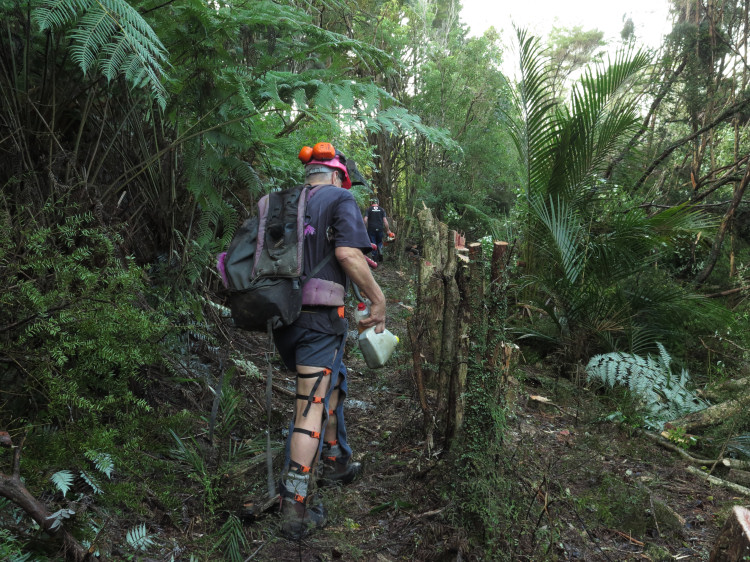 Back to the boundary fenceline, today with neighbour Gary coming along to help, because he wanted to get out and do something active.  I walked along with them for a while to see how it was all looking: Stephan's been working hard! 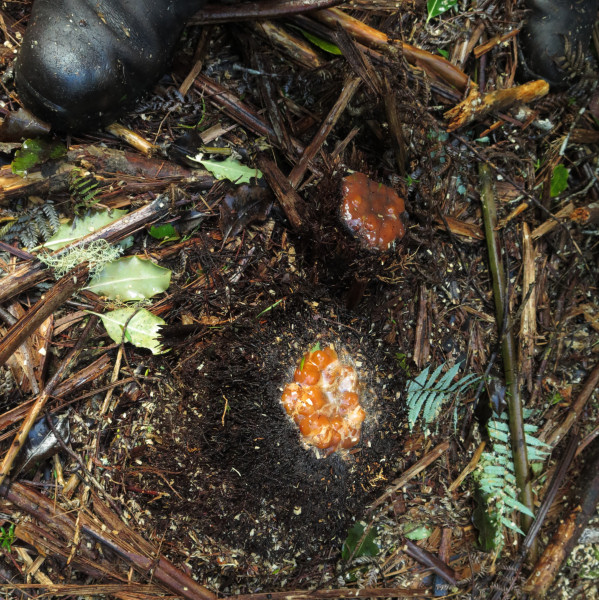 Cut Ponga stumps look terrible, as if they're bleeding! 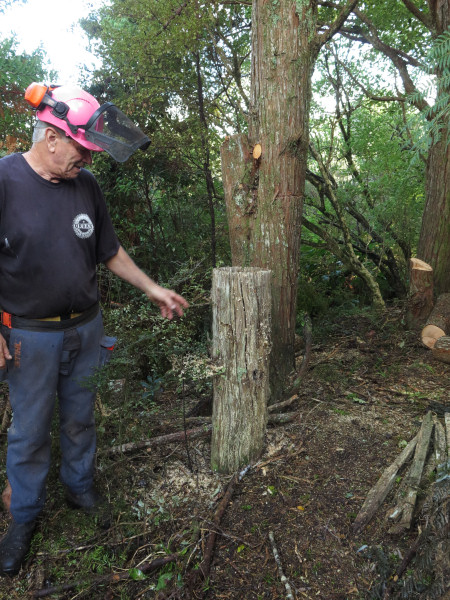 This is an ancient but still reasonably sound Puriri fence post.  There have been quite a few along the fenceline.  You couldn't rewire the fence with a post like this though because while it's still quite firmly in the ground, its surface is no longer solid, so it would not hold staples.

I'm not sure how it should be described but Puriri has very hard, very long-lasting "skeletal" structures which remain for decades after the less-permanent material has rotted away.  (In the right locations, those gaps become wonderful places for native orchids to grow.)

I went off to the doctor today, since I've been continuing to feel distracting discomfort around my surgery scar.  The doctor made me feel much worse!

His primary concern was that I may have a hernia somewhere but after poking and prodding for several minutes, asking me to cough while he did so, he concluded that was not the case and has thrown some anti-inflammatories at me for a couple of weeks, to see if that settles things down.

I will also continue to rest/sit a lot - easy to do as there's still a huge amount of work to do within this site in my ongoing efforts to make it responsive for mobile device browsing.

Just before 5pm we left home to go out to Kareponia Marae, in time to meet the rest of the students outside, before the pōwhiri began at six.

We have been determined to fully attend these events when we can.  There is much to be gained from the communal experience of staying on a marae (the only thing you lose is sleep because of the inevitable unfamiliar snoring).  Many of our classmates do not stay and thus miss out on some of the increasing closeness we all feel as a group.

The other reason for doing everything we could to be present for the whole time on this occasion, is that the next noho will be in October and our participation then will be uncertain, because calving will have begun.  If there are no heifers immediately due then and if our milking attendants are available, we may be able to get away for a while but bovine midwifery must be my primary focus at that time.