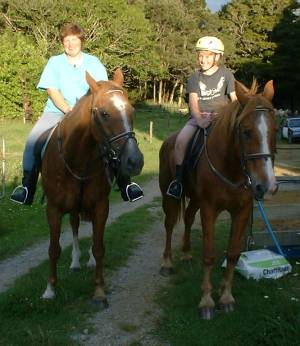 This turned out to be a weekend with a horse theme.  Saturday evening, Erika and Neil arrived on a couple of horses and went for a ride out to the back of the farm. 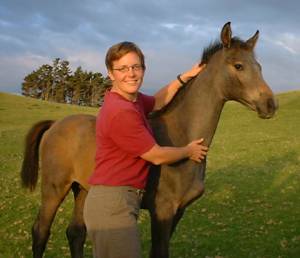 On Sunday afternoon, Gisela and I went to visit my friend Lynn, to see her horses, farm, cattle and have dinner.  There are a couple of quite young foals, who were absolutely delightful.  I, being a cattle person, about which I know lots, was able to ask all sorts of silly questions about horses, about which I know almost nothing.

Gisela and I spent several hours on Monday, walking up and down the hills and gullies around the back of the farm, looking for five bad little animals who'd not come home when we shifted the rest of their mob.

We found them on Tuesday, just after we started to look for them again, sitting happily in the shade under some trees.  They're last Autumn's calves and at this age they're a bit silly and don't seem to recognise that they're part of a larger herd.  Most of the cattle move around together, or at least come together at various points in the day, so when I call them in, the whole lot tend to show up.  All except the youngest ones! 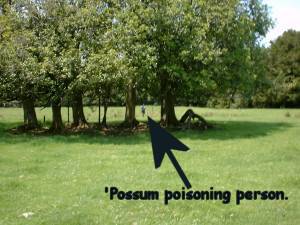 The Northland Regional Council has funded and organised a 'possum poisoning drive through most of the Far North area.  Three guys came through our property on Monday and Tuesday and stapled cyanide based baits to our trees and fenceposts, anywhere 'possums were likely to be, i.e. everywhere.  We are very pleased about it, since we spend a lot of time trying to get 'possum numbers down by shooting and trapping them.
They moved so fast it was hard to get pictures of them!

Looking back through the last few pages on the site, I realise that Gisela has appeared all over the place, doing wonderful things.  I may, however, not have fully explained her presence here.  She has come from Germany and is staying in Aotearoa for a few months.  We met her and her travelling companions on the Rawene Ferry at the end of last year and after spending a few days here and then heading south, she returned again on Christmas Day and has been with us since then.
We didn't know her before, but we know her now.  Sometimes being later than one means to be and missing a ferry can be a wonderful thing! 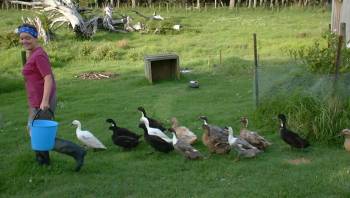 Friday was my niece Stella's first birthday.  Since we weren't able to attend her party, we cracked open a bottle of sparkling wine and toasted the beginning of her second year with us. 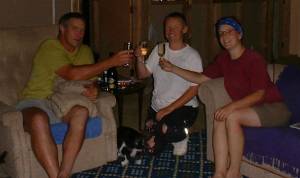