There's a big storm forecast this weekend, as a deep depression moves across the Tasman Sea toward us.  Anticipating nasty weather, I moved the thin cows down the road last evening and left them near the yards for the night, and this morning, when the rain stopped for an extended period, I pushed them into the yards and gave them their third copper injection for the winter.  It is just over seven weeks since their last one, six weeks being the interval suggested by the vet for this winter's supplementation.  The first of the cows could calve within the next fortnight, so I will need to get the fat mob in as well and repeat the procedure. 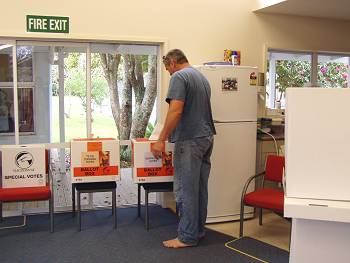 Today is Election day in Aotearoa!  The campaign has been fiercely fought, alternating between nastiness and hilarity, and seems to have turned into a shameless bribe-fest on the part of the incumbent Labour Party and the National Party which wishes to unseat them.  Much of the debate covered by the print and television media centres around the question of "what's in it for me?" rather than what's in it for the good of societal cohesion and centrally provided services like education and health.

During the afternoon we shared a ride with Jane, our neighbour, to the polling booth at Pamapuria School.  I couldn't convince Stephan to pose in quite the way the political candidates do for their media photographs, but you'll get the general idea.

We spent last night watching the television and internet election results.  The Labour party has a one-seat majority thus far, but the results of the special votes cast by those who were not in their electorates yesterday will take a few days to be included in the count, so it will be an interesting couple of weeks while the parties begin preliminary coalition talks and we wait to see what shape and colour the government will take for the next three-year term.

It is about time to begin the annual "Isla's Calving Date Competition".  This year, because it is something I'm very interestedly anticipating, I would like to add something extra to the fun, by challenging you to predict when and what Ivy will produce this year.  Ivy is Isla's 16-year-old nearly tooth-less mother and has produced twins at her last two calvings. 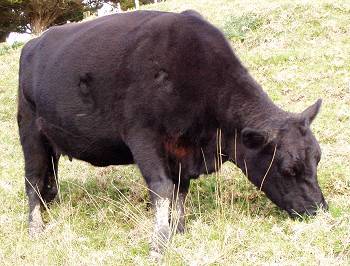 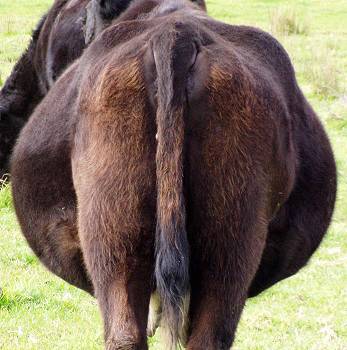 Anyone from anywhere in the world may enter, with the results announced soon after the calves are born.

Today I went to Broadwood for a Women in Agribusiness meeting, this time learning about Angora goats, at Susie Douglas's farm.  Despite the power and telephone having been out of order for 24 hours by the time we arrived, everything went very well, with the use of a generator to run the computer-based presentations.  There were big trees down all over the place and one of Susie's sheds was newly inserted into another by the huge winds of the storm.

On our way there, travelling through the Mangamuka Gorge, I noticed a tree (in the almost exclusively native bush) which appeared to have yellow leaves, which would be very odd at this time of the year: it was a flowering Kowhai!  Along the river gorge from Mangamuka Bridge to the turn-off to Kohukohu and Broadwood, there were large numbers of the trees, all prolifically flowering.  I've never noticed them before.  On our way home, I watched out for them and saw the last one on the south side of the Maungataniwha range (through and over which runs the Mangamuka Gorge), but couldn't see any on our side.  It seems strange that they should have such a sudden cut-off point - I wonder if they have been subject to too much possum predation to have survived, or to have flowered this year?  There is a picture of Kowhai flowers in the Week of 4 September 2004. 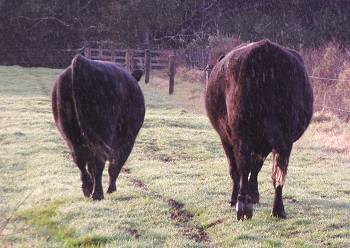 One of those days I'm not the least bit keen on, but an event which has long been planned.  I had a call last night from Mangonui Haulage to say they'd be picking up steer 356 and Quadrille 07 in the morning to go to the works.  This morning I was out before 6.30am to get them in to the yards - cattle are supposed to be yarded at least four hours before transport, but that's a bit difficult when the truck company doesn't call until after dark for a morning pick-up. 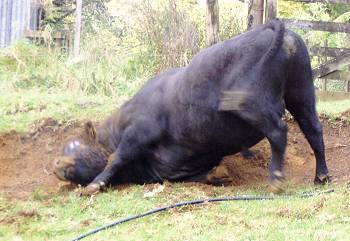 When we came down out of the lane, the bull tore off to his favourite dirt-bank rubbing spot.  Having lived in the same paddock for several weeks, he's had no such dirt to rub in, so he really enjoyed it this time!  He became quite excited and then ran around snorting, to such an extent that I decided it would be wisest to hop through the closest electric fence, until he had himself under control again!

Once in the yards I spent some time brushing 356, then put them both up the race to paint some initials on their backs and take a few hairs from Quadrille's tail, in case we ever need a genetic profile done.

The truck was early, for a change, they loaded fairly easily and off they went.  The truckie didn't realise he was transporting two former media stars: 356 in these pages and Quadrille here and in the NZ magazine Growing Today on a couple of occasions.

So that's the end of the steer 356 story.  From his birth under an electric fence to his young heifer mother, to that hideous day which actually extended his life on the farm by eighteen months, since he would otherwise have been long-gone, with the other steers of his age.

The Quadrille 07 story will continue in that his daughters are due to calve for the first time this year.  He was an excellent bull in terms of his manageability and temperament: extremely noisy, his growl often reverberating around the place; but even in his most excitable moments I could get him to go where I wanted him, without threat to my safety.  His time had come for two reasons: firstly that I've used him for four years' breeding and that's quite long enough - if his daughters turn out to be the best cows I've ever had, then I'll be glad I kept him as long, but if not, then I may have put too many eggs in one basket, so to speak; secondly he injured some part of his back left leg last breeding season and still had a slight limp, which made him unreliable for mating, since pain will stop a bull doing his job properly.  Quadrille still has some calves on the way, due to be born in the next few weeks. 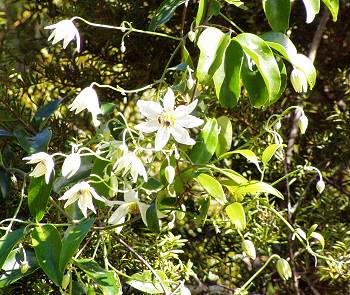 The Clematis is about three weeks early in flowering this year, as is just about everything else!  I noticed the buds on this vine the other day, and it looks like the plants might be in for another bumper flowering season, so I shall see how many more vines I can spot in the trees this year.

Often when I send cattle off to the works I have a yearning to do something health- and life-supporting with the other stock, so today I brought in the last of the cows to have their copper injections before calving starts.

There are some udders beginning to fill in that mob, so I made notes and shall have a look at the mating information from the beginning of the year and see when and which ones I'll need to bring out of the mob first.

By the way, if you fancy a four-day-a-week job (Monday, Wednesday, Friday, Saturday) driving a truck full of NZ's best commercially-produced milk around a route which includes some of the nicest Far-North scenery (although some of it you'll not be able to see in the pre-dawn mornings), let us know and we'll point you in the right direction!