I combined the two cow mobs today, by letting the "fat cows" into the big back paddock with the "thin cows".  The thin cows weren't to be seen at the time and I left before they found each other for the usual social rearrangement session - I left the two mobs with only one lane fence between them a couple of days ago, so at least they'd be able to see and smell each other for a while before being in the same paddock together.

I'm never quite sure of the best way to manage this process, but in the end it comes down to the simplest management: in a few days I'll bring some of the cows to the flats as they get close to calving, so having only one large mob of the remainder to manage is a lot easier than two, and if I bring single cows out of two separate mobs into one paddock for calving, they'll push each other around anyway and the closer they are to calving, the more dangerous that might be!

The yearling heifers were looking a bit sick of being in the Camp paddock (after only three days, I might add), so I brought them in to the yards and weighed them.  They're doing ok; I think they're up to par with last year's heifers, despite having been weaned at about three months younger - I'll need to weigh them on a date corresponding with last year's weigh-ins to really tell.  Some of them are looking spectacular!  The two almost-sisters, 475 and 486, whose mothers were half-sisters (16, the old grey cow, and 348), share the same sire, so their pedigrees are much the same.  (Pictures would probably be useful here, but I haven't taken any.)  I nearly sold 486 but at the last minute decided that one of the others would have to go instead, since I bred 475 and 486 quite deliberately and would probably regret selling one of the pair, as watching their joint progress should prove very interesting.  They're second and third in growth rates, both for the latest period and for the whole of their lives.  I had not expected such good growth rates from the EBVs of their sire.

I went to check on the R2 and R3 heifers this afternoon and discovered some noticeable physical changes in a couple of them, so Stephan and I wandered back out there a bit later, drafted four of them off and walked them in to the house paddock for closer observation.  My records tell me that they ought not to calve for several days, but one can never be too sure with heifers, bulls not used before, or indeed the dates I think they were mated on, if it was a bull doing the job, rather than me by insemination.

I watched in growing surprise today, as two of the heifers I brought in from the back last evening, showed signs of starting labour!  One eventually returned to grazing, but the other, 421, was obviously getting on with calving.  It has begun! 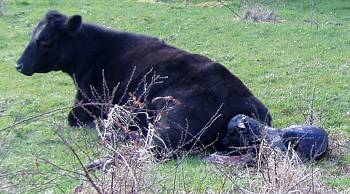 421, oblivious to her new companion! 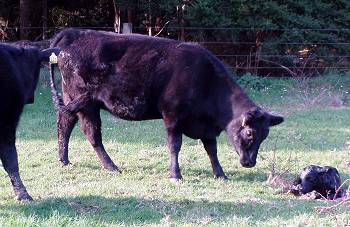 I try and observe heifer calvings in particular, since they have an unfortunate tendency to just sit and rest when the pain and straining stops, often leaving the calf still with membranes over its nose and mouth and fluid still in the bag set to be breathed in as soon as the calf attempts its first breaths.  True to form, 421 just sat and rested, and her calf lay still behind her.  I removed the membranes from around his head so he could breathe and stepped back to see what would happen next.  I began to think the calf would get up before the heifer did, but eventually one of the other heifers came over and pushed 421, so that she had to stand up to get out of the way, at which point she ran off, until I practised my calf-noise skills and she looked and came back to assume her maternal role!

For the next few hours that actually seemed to involve pushing the calf over off his shaky legs while he was trying to stand and then bellowing at him every time he moved.  I think 421 was allowing the calf to feed a little just after dark and by 3am when she woke me by bellowing at him where she'd corralled him in a corner of the paddock by the house, she was far more cooperative, especially while I stood and quietly talked to her.

It is my impression that when strange and frightening things happen around the cattle, they settle and return to calmness if I'm there talking to them quietly. 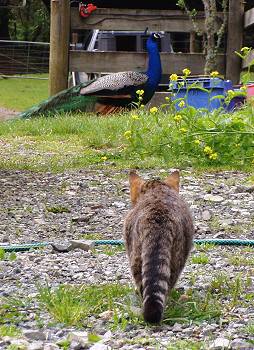 I think somebody is getting just a wee bit ambitious! 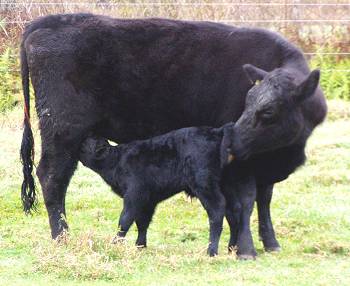 421 was still pushing the calf around a bit this morning and was also a bit upset about 423 trying to steal the calf away from her!  I moved 423 away from them a couple of times until she went off to graze, and 421 went back to the calf and allowed the calf to have a really good feed.

I would really like to move 421 to better feed, but until another heifer calves, she's going to have to stay with the others, because being alone, even with good feed, would not make her happy!

My sister, Rachel, and her friend Lynn, have come to stay for a few days.  They came for a walk with me, out to the back of the farm to see the young heifers and to bring anther four of them in to the flats, where I can more easily watch them. 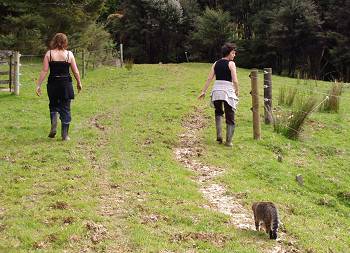 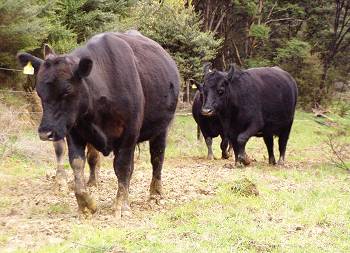 Because 421 calved so early, I've decided to act with some caution where the daughters of Lendrich, in particular, and Quadrille are concerned.  Virago Lendrich 05 AB was a short-gestation bull - most of his heifer calves were born four days earlier than the usual 280 day average gestation period.  I shall watch his other daughters with some interest, to see if they too have their calves earlier than normal. 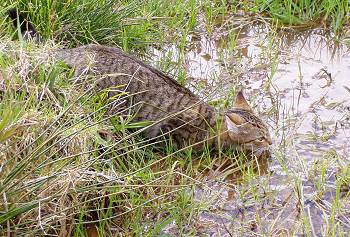 Spice gets very thirsty running along on our walks, leaping up trees, across rivers ...  She pants with her mouth open when she's out walking and running, which I'm not accustomed to seeing cats do - but then most of my cats have spent most of their lives lying around in the sun! 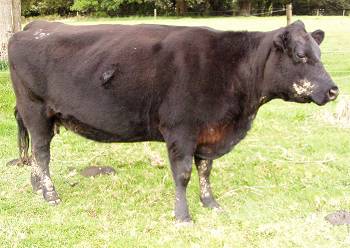 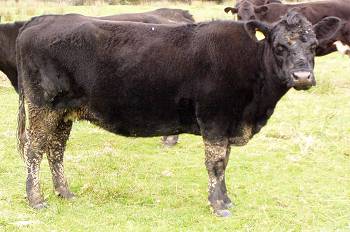 And this is Onix, Issa's cow.  She's in calf to Virago Arran 20, due to calve (I think) in the first two weeks of November.

Onix has her own special page, although I haven't updated it for quite some time. 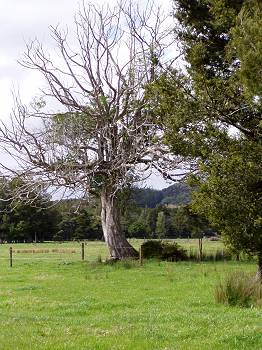 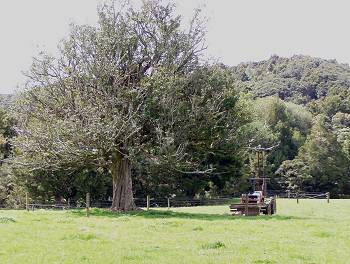 Stephan went out and did some more Puriri protection fencing, this time in the Mushroom paddock, where all the big trees have suffered badly from stock damage.  There's one tree already protected which is looking very good, and we hope the others will recover now that they're fenced off from the nibbling teeth of the cattle!

I moved the cows, drafting off four of them who looked like their udders were developing quite quickly or whose records suggested they might be closer to calving than they actually look.  I make little notes in my notebook at this time of the year, assessing each cow's udder for its stage of development, so if I noted a cow's udder as 1/3 full yesterday and today I think she's 3/4 full, I can see she's changing quite quickly and will likely calve in the next couple of days.  The thing I have to remember is that my careful observation during mating still doesn't necessarily tell me the whole story and that a noted mating date may very well not be the one on which the cow became pregnant, since some of the cows will appear to be on heat again three weeks after the first mating, but already be pregnant!  Thus it's only the once-inseminated cows I can be really sure about! This afternoon Rachel and Lynn headed off across the paddock with their books and blankets to lie around near the swimming hole.  Later Lynn came back and made a picnic, and Stephan arrived home just in time for us to join them with a bottle of wine.  Sometimes life is just so hard.

Late last night heifer 404 looked like she was starting labour, so I set my alarm clock for 2am to check her again.  The calf was already born and just up on her feet, so I left them to it and went back to bed. 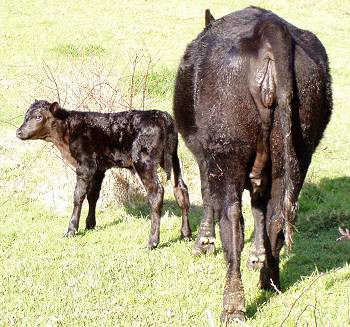 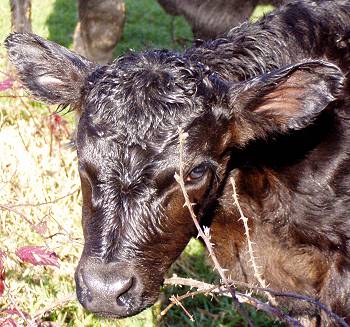 This is the first calf of Arran 20, Isla's two year old son, so Isla now has three grand-calves.  She's a really fine-boned little animal.  She was born at 271 days gestation like the first calf, her mother being another of Lendrich's daughters.

This afternoon I went out to wipe some rushes and observed Ivy standing in the corner of her paddock looking rather unhappy.  It occurred to me that perhaps the little bulls had been giving her a hard time, so I brought her through to share the other paddock with the cows I'm expecting to calve early.  I stayed in the paddock wiping rushes there for a while, so I could watch her and see what happened next.  She didn't seem to be eating much and kept sitting down.

Later in the evening I put her in a paddock with a bit more grass, on her own, but next to the other animals and tried tempting her with molasses and Puriri leaves, neither of which she showed much interest in.