The week beginning the 6th of April 2013.
Saturday the 6th 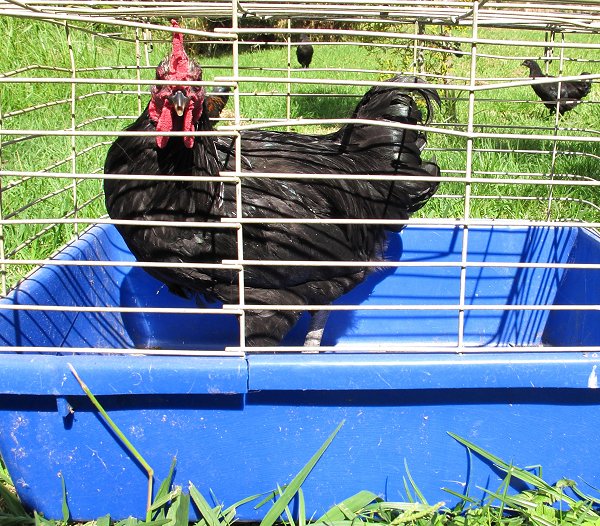 One of the little black roosters (of the first clutch of eight) is going away to a new home (with Lynn and Kees's chickens) for a long and happy life doing what roosters are for.  This is a lucky escape from the fate that awaits the others in the next few days. 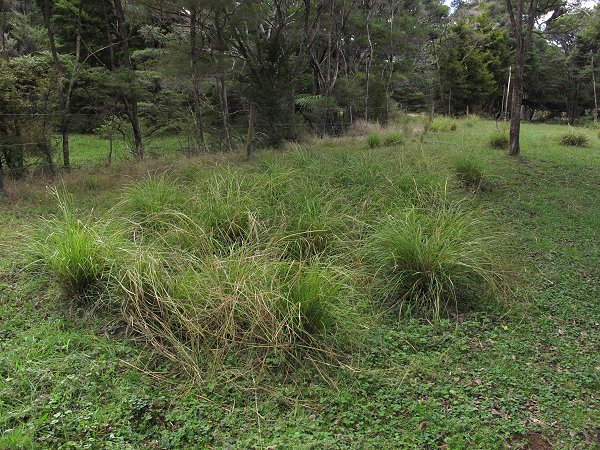 Deciding it was time I actually did some real farm work, instead of endlessly working in my office on websites and other writing, I took one of the weed-wiper sticks out into the fields and started on the sedge.  It is noticeably marching its way across the farm and it's time we stopped it.  Having seen dead plants in the Middle Back where somebody did some wiping during the summer working bee, I felt encouraged to get on with it.

The plants appear to be clumps of individuals very thickly growing together and I have not, in the past when I've wiped them, been convinced that it's possible to easily kill them. 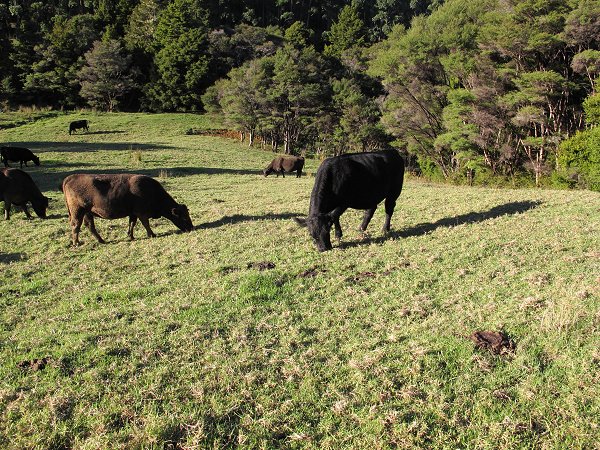 Some of the cattle in the Back Barn paddock were standing near the gate complaining, but many others were still actively grazing the sunny hillside.  There's not a lot of feed here, but these heifers seemed happy enough. 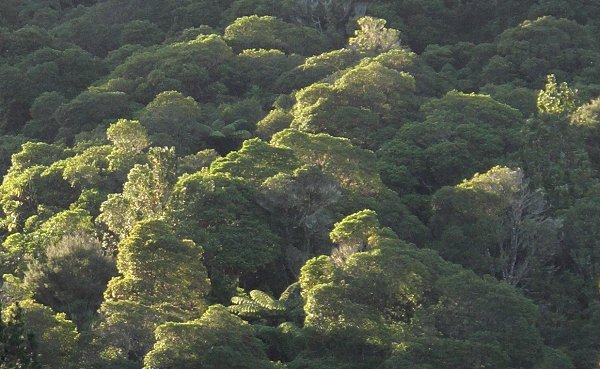 The late sunlight was catching the canopy of the native bush up in the hills behind the farm.

I cropped the photo to exclude the nasty pine trees on one side and the gum trees on the other.  I prefer the appearance of the native bush and its diversity. 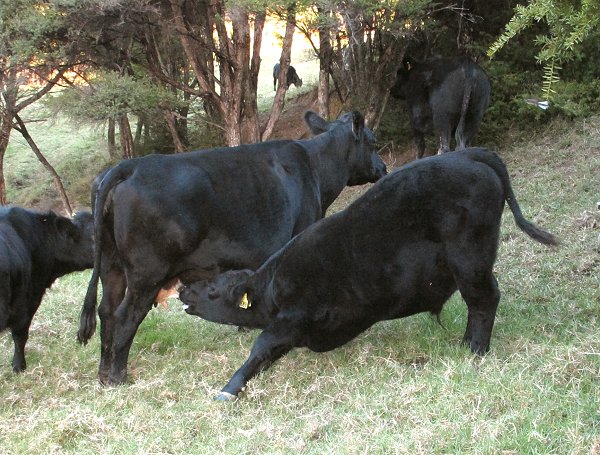 539 and her lovely steer calf.  This calf nearly wasn't, so I'm always delighted to see how well he's doing.

I've decided that 539 will have to go this year.  I've always liked her, but she's had a couple of calving-related difficulties and appears from her outer shape to have suffered some sort of internal rearrangement which I suspect may have something to do with the way her calf didn't properly present last year.  Her mother had a similar issue and I'm suspicious that's more than coincidence. 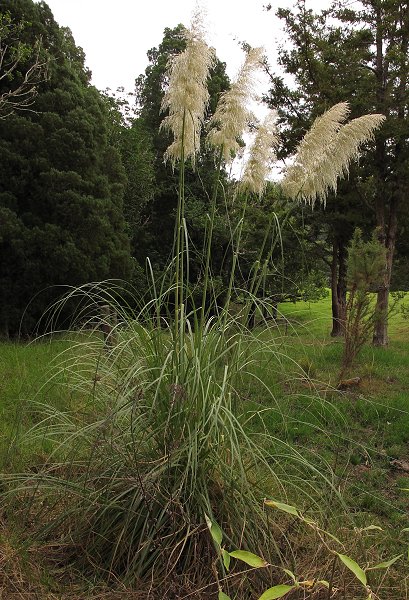 Pampas, another invasive weed.  Since noting how well Glyphosate (herbicide) deals to pampas, when Stephan weed-wiped a plant last year and it quickly died, I have been meaning to come up and get the two plants in the reserve on the Over the Road hillside.  I have left it a bit late, so cut the flowers before wiping the leaves.  I carried the flowers home and put them in a big vase in the living room, where they look fluffy and nice and will eventually drive me mad when there's fluffy white stuff all over the room. 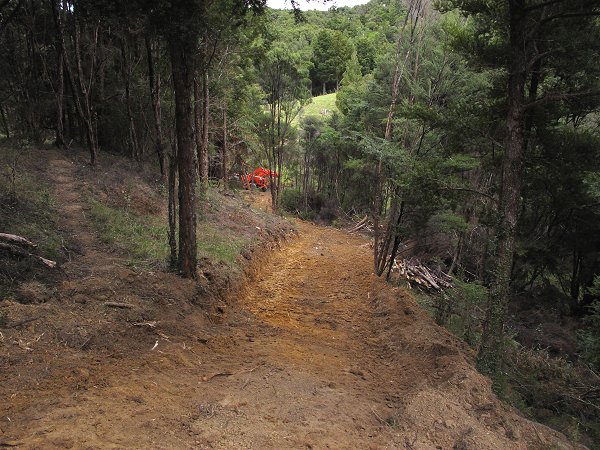 I rode out to see how Stephan was getting on.  He's been changing the landscape again: creating a track down which he can thump in fence posts with the tractor.

Stephan took the bike home to have some lunch and I spent the time weed-wiping the sedge plants I saw the other week on the side of the hill. 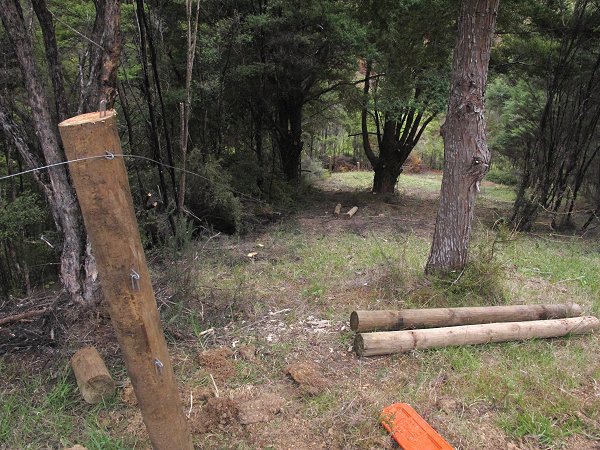 Later in the afternoon I came back again and there were fence posts thumped in for one section of the swamp's north-side.

This is quite a steep bit of hill; Stephan's really enjoying the stability of the tractor! 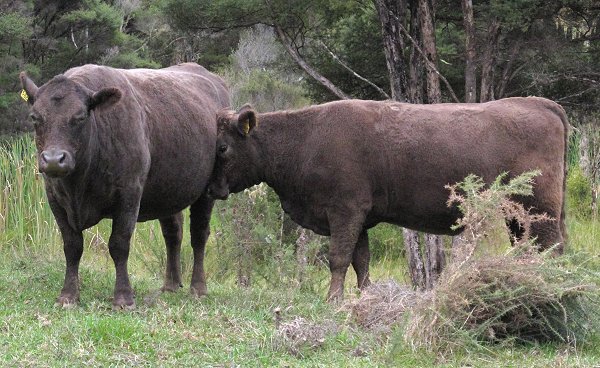 Curly (who did not calve this year) and her last daughter, Endberly.  Curly was standing, chewing her cud, eyes half closed and Endberly stood with her face pressed gently into Curly's side.

The two of them have been in the same mob for much of the season, since I put the empty cows back with the yearling heifers as the rest of the herd was getting ready for calving last year.  I often see them close together. 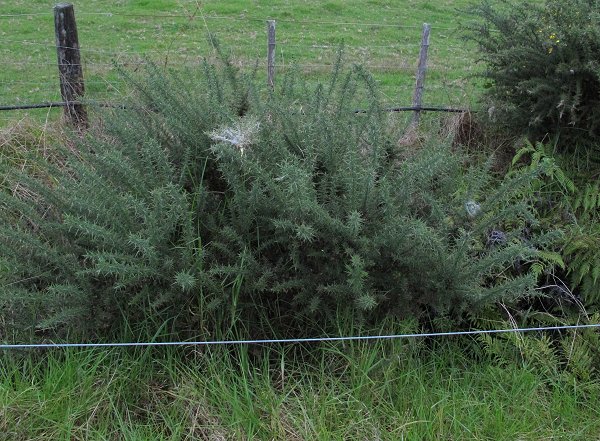 At great personal risk (of getting bits of gorse in my fingers) I broke a spider-mite-covered branch off the gorse bush in the Big Back Paddock and brought it back to throw into the middle of this healthy bush growing in the drain along the lane by the house.  Hopefully the mites will move into the new bush.

While Stephan carried on fencing, I took our ute to town to have its six-monthly Warrant of Fitness examination, which it sadly failed.  Just a tie-rod end this time, but the mechanic didn't have one in stock, so I will have to return tomorrow to have it fitted.

I also went to the optometrist, because I really can't see clearly at present.  My left eye is apparently changing shape.  I made sure I saw the same optometrist as last time, who understands my extreme sensitivity to even very minor changes in vision.  I spent two more years without glasses than I would have had I seen her the first time when my eyesight began to change.  The guy I saw then told me my vision was 100%.  Bollocks.  I promptly went across the road and bought some binoculars, so I could at least see things in the distance.  Apparently my normal eyesight was 150%.  Who'd have thought it could have been 50% better than perfect?  But that did mean that when things went wrong, nobody bothered about my complaints that I couldn't see as well any more.

I can't really afford to have new glasses, but I can't stand fuzzy vision either.  Fortunately I can have a one-lens replacement in both my long-distance and computer glasses for a very moderate cost, although I'll have to manage without both for a couple of weeks. 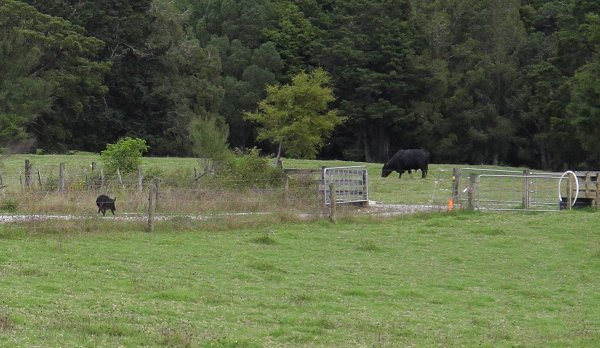 I came home for lunch and a movement out the window caught my (fuzzy) eye.  Being used to small black animals around the place at present I didn't take much notice until I realised there aren't any small black animals in the House Paddock and looked back up again, to identify a young adult wild pig, trotting up the lane.  Goodness knows where it came from and what it was doing alone out in the open like that.  It ran up the lane, under the fence into the Windmill paddock and across toward the gate to the Camp Paddock.  It presumably dashed through the fence or under the gate and away up into the bush.

I went and spent a leisurely couple of hours this morning with my godfather.  It was good to catch him in the morning, I think, rather than later in the day.  At nearly 92, it's obvious when he tires and conversation becomes sparse.  We talked of many things.

I came home for the afternoon and worked on the farm accounts.  I seem to have spent too much time on them this year, with all the tractor calculations I did before committing to that purchase.  When I went back to town to pick up the ute (with it's nice new Warrant of Fitness sticker) I dropped them in to the surprised accountant.  Last time I was this early with them, our accountant retired, probably in shock.

I had great intentions of finishing a column for the magazine, but then a friend arrived and stayed for several hours.  Because I rarely stop doing something, I tend to take socialising opportunities when they present themselves, so got very little done today at all.  When I did get out to move the cattle, it rained and I got very wet and very cold and the rain stopped just as I came home.  But who would dare complain of rain when the drought still persists? 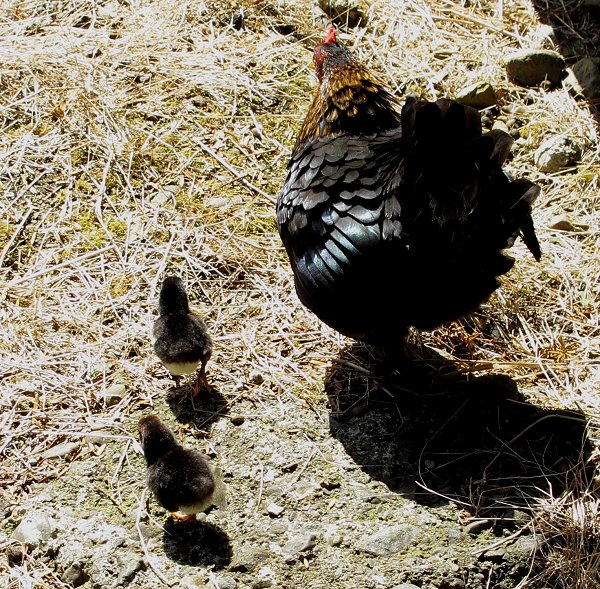 Stephan found this little family this morning.  She must have been nesting near the tractor shed.  The hen is the mother of the eight chicks which are now living quite independently.  Little hen has been appearing each morning with a lot of flapping and squawking, which usually indicates nesting. 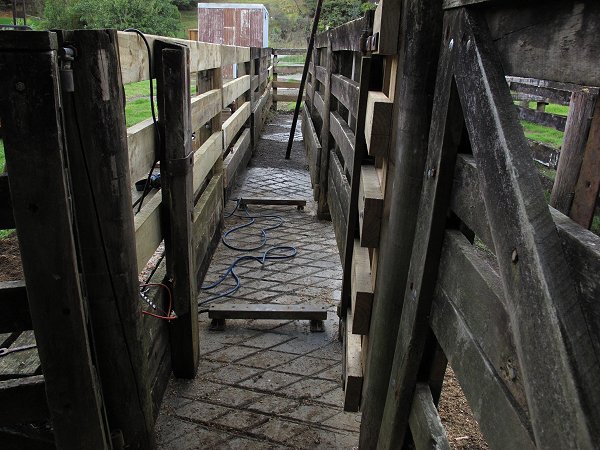 Stephan was over at the yards and when he was ready, I went over so we could work out where to drill the holes in the new concrete to anchor the scales when they're in the race. 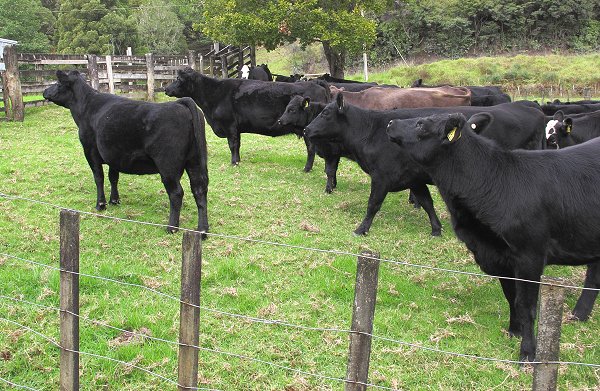 I'd brought the cows in ready to weigh them when Stephan was finished.

But before I could use the yards, there were some finishing jobs necessary, including grinding off some protruding bolt ends.  The cattle first scattered as the noise of that job started, but then all turned and came back with their noses raised, smelling the acrid smoke of the grinding sparks. 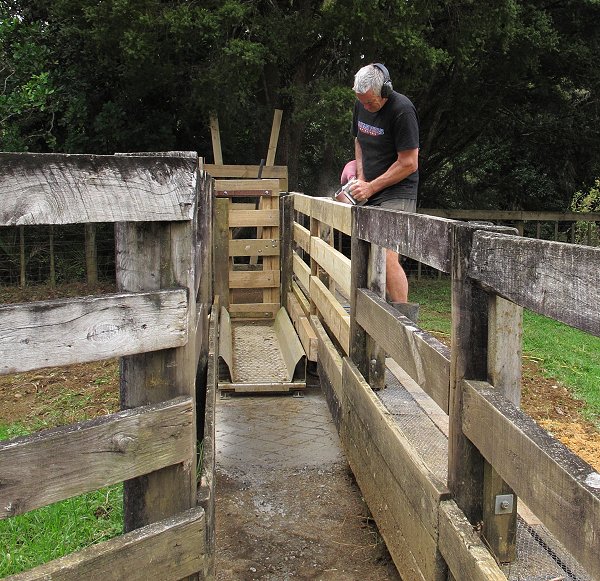 The final touch was some sanding, so the edges of the rails are smooth to my delicate touch - and maybe I'll stop catching my clothes on the rough bits now.

Part of our scales placement calculations involved working out how to pack out the gaps between the rails and the edge of the aluminium platform, so calves can't get their feet stuck in the gaps.

We tested the scales as we normally do, but I have no idea whether they're weighing correctly because my usual measure is Stephan and he now weighs about 16kg less than he did last time.  The scales are much firmer on the new concrete, where they used to move a bit as animals walked onto the platform.  Hopefully that didn't affect the accuracy of the weights they gave me, but today's readings certainly settled more quickly than in the past - the display waits until it has a firm reading before providing the weight.

I wondered how the animals would respond to the new concrete and rails, but they seemed less nervous than usual and weighing them went extremely smoothly.

Afterwards we put that mob over the road - up this end, because there may still be cattle on the neighbour's place up the road. 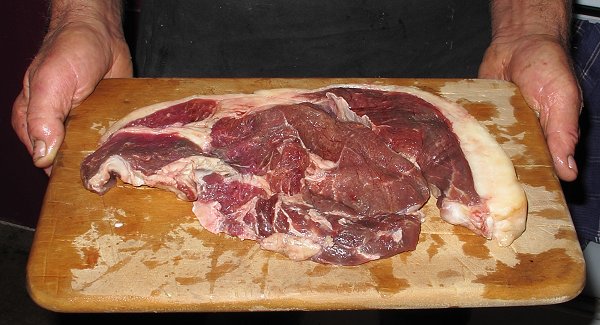 Rump steak from heifer Dexie 86.  Bear in mind that Stephan's hands are about one and a half times normal size (he has 150% hands, I had 150% vision).  Isn't one supposed to eat a portion of meat no bigger than one's palm?  This steak lasted the two of us two nights.

I have a suspicion that in North America, it'd be one serving. 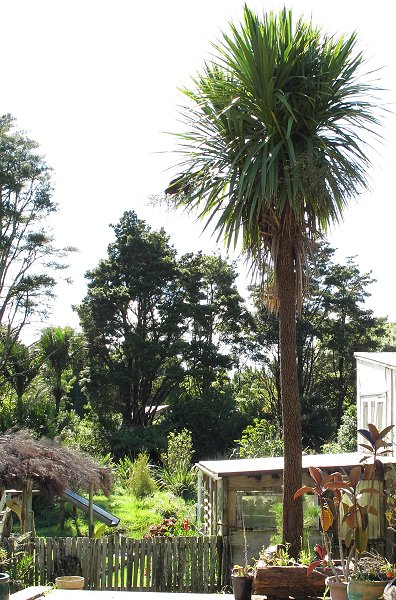 Working in my office, I heard a Kukupa outside - their wings make a characteristic noise - and then confirmed that it was in one of my two Cabbage trees, eating the fruit (out on the left side of the tree). 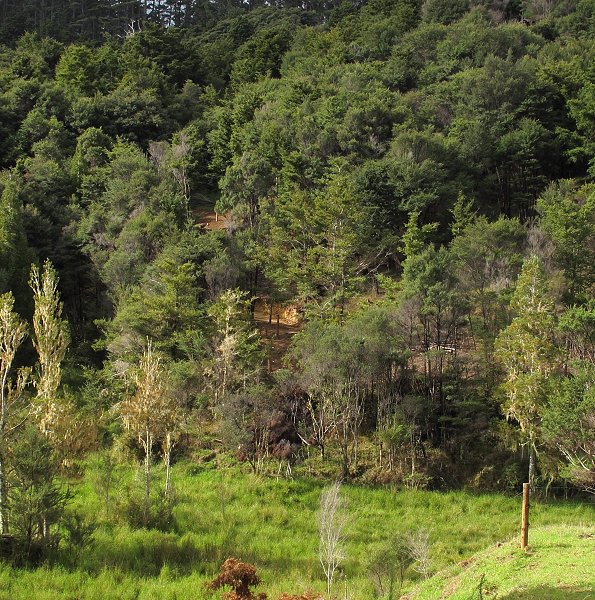 I went for a ride out the back, checking grass levels, swamp residents, and fencing progress since the other day.  The brown cutting is the area I photographed as Stephan was working on the tractor on Sunday, now with a fence running down the slope. 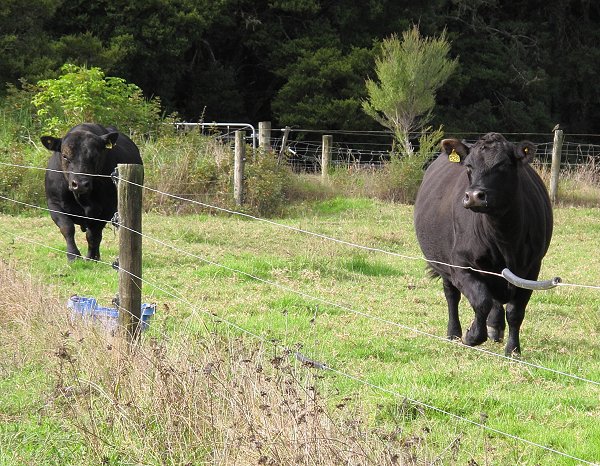 I took the other mob of cattle in to the yards and weighed the calves.  Afterwards I did some rearranging: Joe 90 was standing by the gateway in the Windmill, so I brought him out and along the lane to Flat 1, then put 528 in with him for company - I've decided she really should go to the works, so she can go with him.  But she wasn't happy about being separated from her friends, at all, spending ages running up and down the fenceline.  I hate doing this to them.

I drafted the six cows with steer calves out of the big mob and sent the cows with daughters and the yearling heifers away to the Pines.  Then the steer calves went to Mushroom 1 and their mothers to 5d next to them: weaning time. 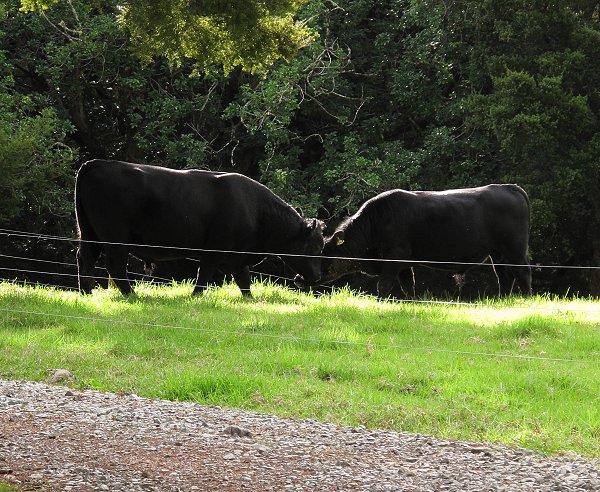 The only two animals made happy by these changes were bulls 96, who'd been on his own in 5d, and 106 who remained in the Windmill paddock after I took Joe 90 out.  They spent some time licking each other's faces in an affectionate manner.

The weaned cows and calves were so quiet throughout the evening that I had to go out before I went to bed, to check they were still where they were supposed to be.  The cows were standing, occasionally quietly moaning to their calves, and the little steers were either sitting quietly chewing their cud, or across the paddock grazing.  Very strange.  I wonder if the cows' milk production has dropped so much lately that the calves are virtually weaned already?