Noise on the road this morning turned out to be a large, slow-moving grader, rearranging the road surface, which hasn't been done for months.  It was last attended to some time before the big flood in March and since then there's been a huge amount of rain and there are holes, scoured channels, all manner of hazards which make driving the road a slow trip if one doesn't want to be shaken to pieces or wreck one's vehicle.

Our next few trips sadly proved that the work was poorly done and most of the problems appear to have been left much as they were.  Once upon a time the Council had workers who did these things well.  Now it's all contracted out to people who you'd think would care because they're part of the community too, but obviously don't.  Or haven't been trained.  Or are on drugs.  Or are really stupid. 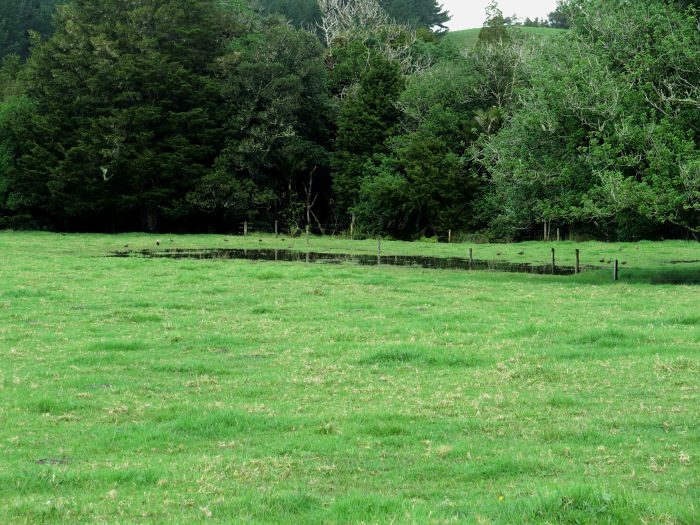 Several times in the last couple of days I've caught sight of a large, white-fronted bird across the flats, some creature sitting on top of one of the fence posts.  I meant to come and confirm that it was a shag (since it was probably not a penguin).

This large rain-filled pool would explain its regular presence, waiting to catch things which swim within.  There's been time enough since a smaller area would have filled with water, for frogs to have laid eggs and there's always the possibility of eels, which can travel across the paddocks between water bodies.

I went and checked the new tank, to see how the water supply for the back troughs was holding out and found it almost empty!  The cattle can't be drinking that much so there must be a leak somewhere, which will be very difficult to trace now that the ground is always wet.  We've had some pressure problems of late so perhaps one of the joints under the track somewhere has separated and we may have to do some digging to find it.  We'll have to have a think about this problem. 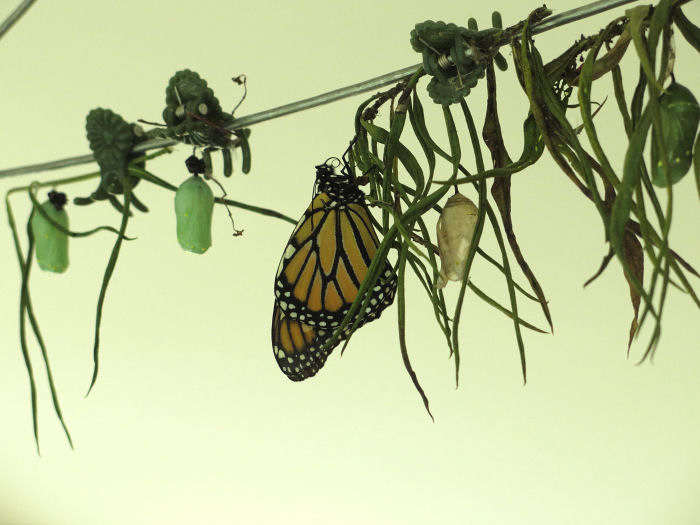 I've been rescuing pupating caterpillars and chrysalises from outside in the cold and it looks like some have survived.

This is a very small butterfly and I'm not really sure where it might go when I put it outside, which I feel I must, for it to have any chance of survival.  There are still Monarchs around on sunny days, so it can't be too cold for them here. 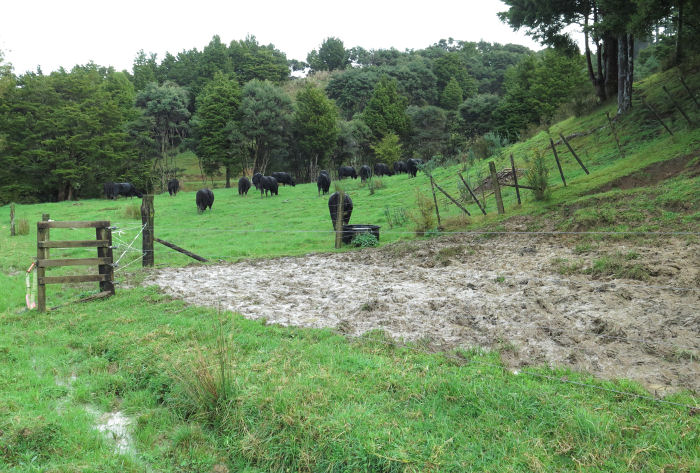 The pregnant heifer mob were all waiting to be moved, standing together in this corner, which gets terribly slushy when they're all there together.  That sort of mess wrecks the soil structure but is fortunately not something we do in many places and is unavoidable in a corner at the bottom of a hill. 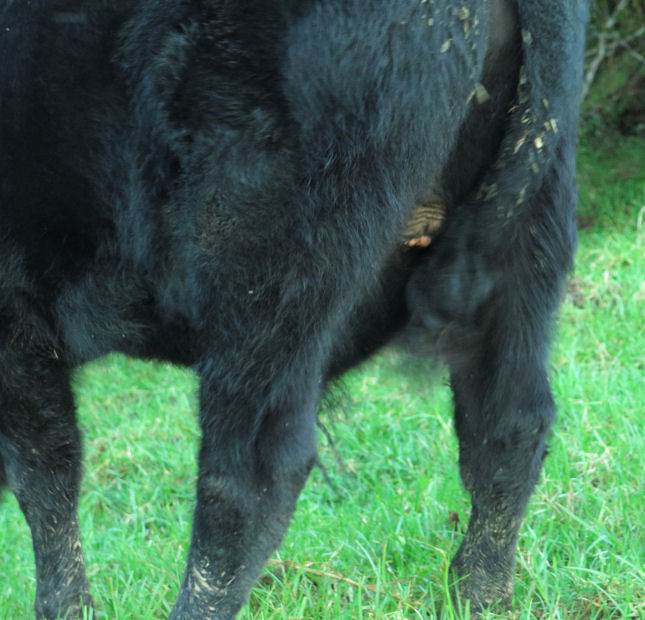 Up in the Middle Back the young cattle were happy to move over the ridge.  I always check 135 to make sure his scrotum is still drying up and all looks healthy and today the shrivelled scrotum has gone and there's just a clean pink scar left.  I'll have to make sure he gets through the next week or two without any problems, with that still-unhealed wound but so far he looks fine. 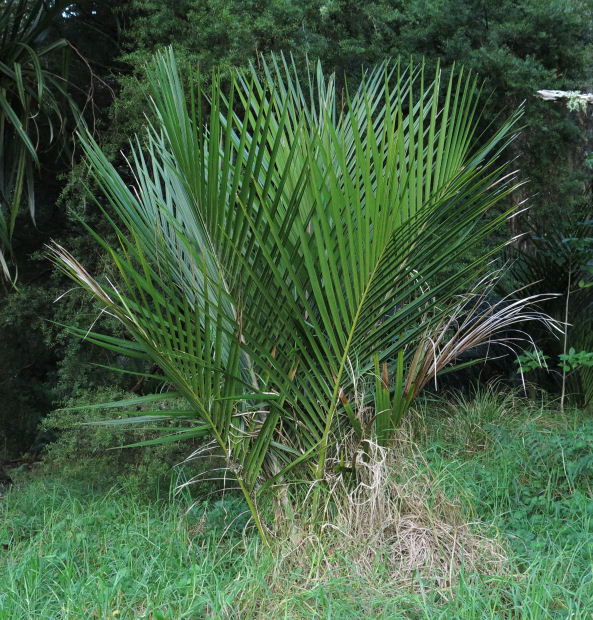 This is a juvenile Nikau palm in the PW reserve area.  They're such beautiful plants at this stage. 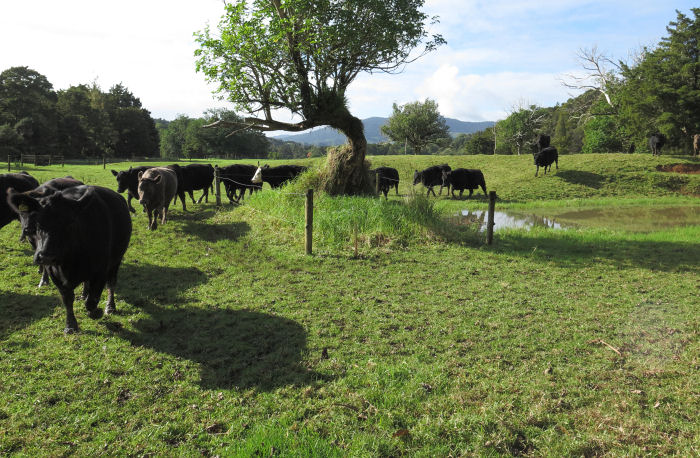 I called the cows out of Mushroom 3 and most of them came down to the gate and out into the lane. 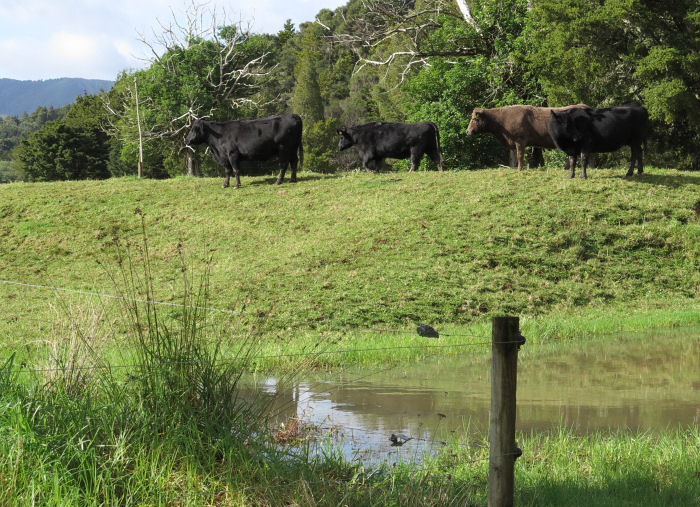 These four did not.  Eva, 729, Endberly and Ellie 119 stood watching the others turn out of the gateway and start walking up the lane and I could see they weren't going to go down to the gate, they were going to walk along in the same direction to the other gateway (to Mushroom 2).  I had to wait until the other cows had gone further up the lane before these sillies would turn and go to the gate out into the lane.  It's not just calves who get this one wrong. 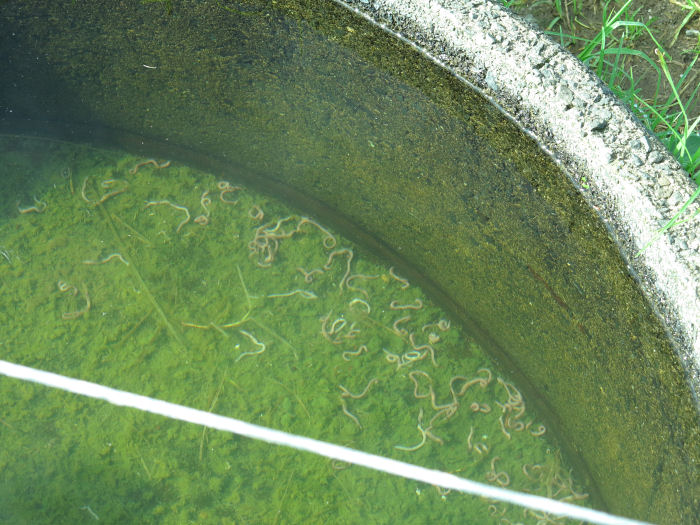 Why do earthworms end up in troughs?  They have to come up out of the soil, climb up the side of the concrete trough and then over the edge.  Where do they think they're going? 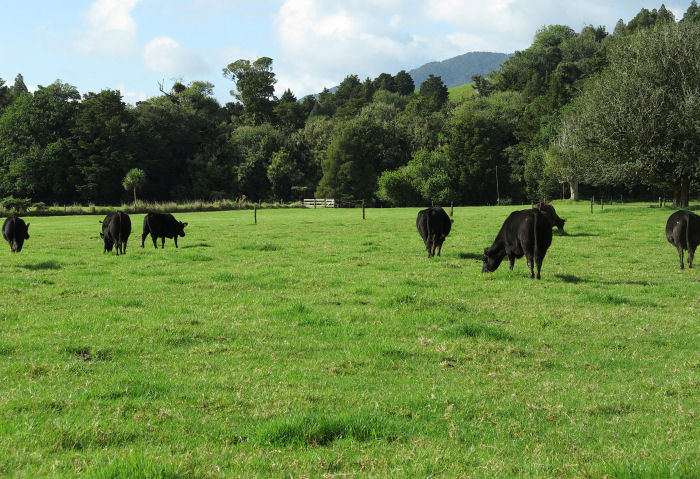 The cows were happy with their new paddock, on this lovely fine day. 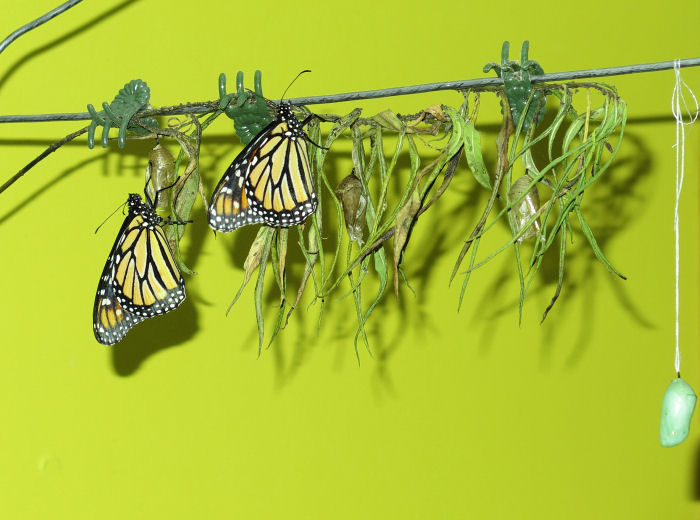 More butterflies.  These two are small like the first one.  We found one dead outside a few days later so I'm not sure that they'll survive at this time of year, even with help now.

The chrysalis on the end of the thread was formed by a caterpillar that chose to pupate on the wire of a spare bird cage sitting on the deck.  I brought the cage inside into the warmth while it completed that process, then tied thread around its stalk and pulled it off, so I could remove the cage outside. 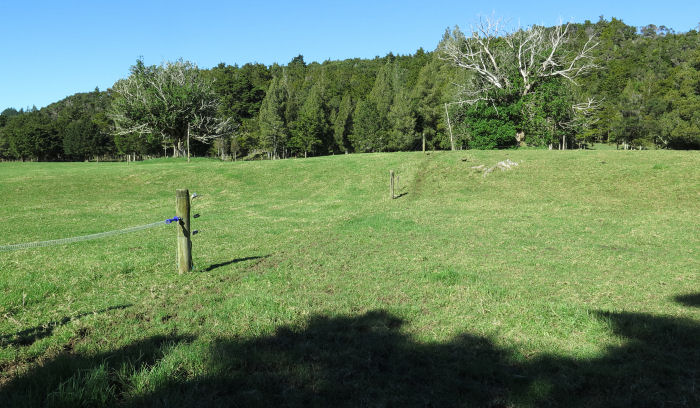 These paddocks are Mushroom 2 (left), which was mown last week, and Mushroom 3, which was hard-grazed by the cows I moved on Monday.  There's not a lot of obvious difference between the two treatments in most places, except where there are dung patches and the cows don't eat that grass right down.  Mowing does make a definite difference where the Kikuyu has been longer. 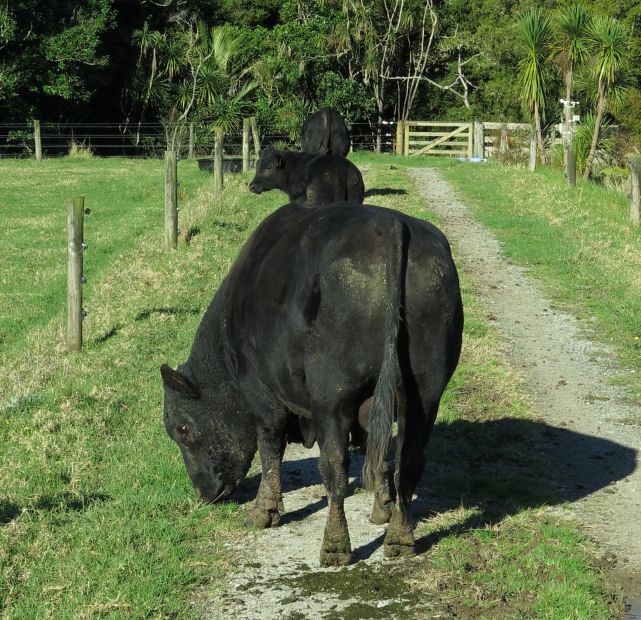 We spent the day walking cattle in to and out from the yards.  I was giving them all their annual 7in1 vaccinations.  Apparently it's better to give them earlier, before ground conditions get wet and more conducive to the spread of Leptospirosis, which is the prime reason we give them this vaccine, but that's never a convenient time.  Better for us when there are only the winter cattle here, after the weaners and cull cows have gone.

The bulls always have an exciting time coming down the lane after the cows have already travelled this way.  They sniff everything with great interest, although there shouldn't be too much of interest with all but one of the cows pregnant and none of the heifers currently on heat.  Still have to check ...

I think I ran over a tiny Plover chick I couldn't then find, when I went out to get the cows.  Its parents repeatedly dive-bombed me, so I kept my helmet on as I shifted the cows out of their paddock and into the lane. 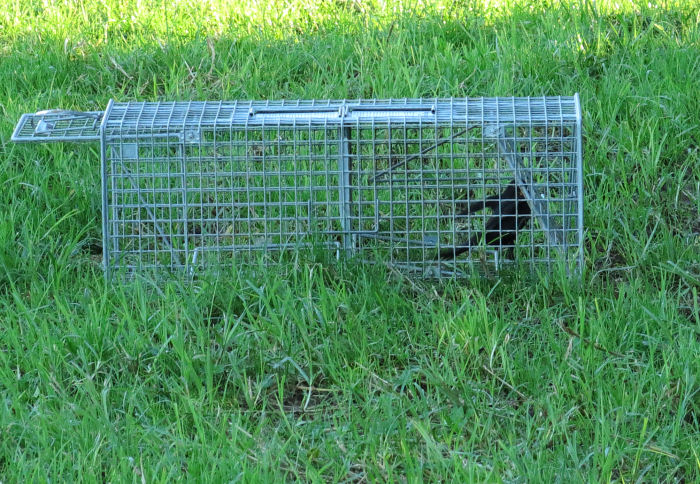 On my way out to set the gates for the young cattle, I noticed the Magpie trap, checked this morning and empty then, now had a very frantic Blackbird in one side.  Goodness knows why it went in, unless it caught sight of its apparent territorial challenger in the central mirror. 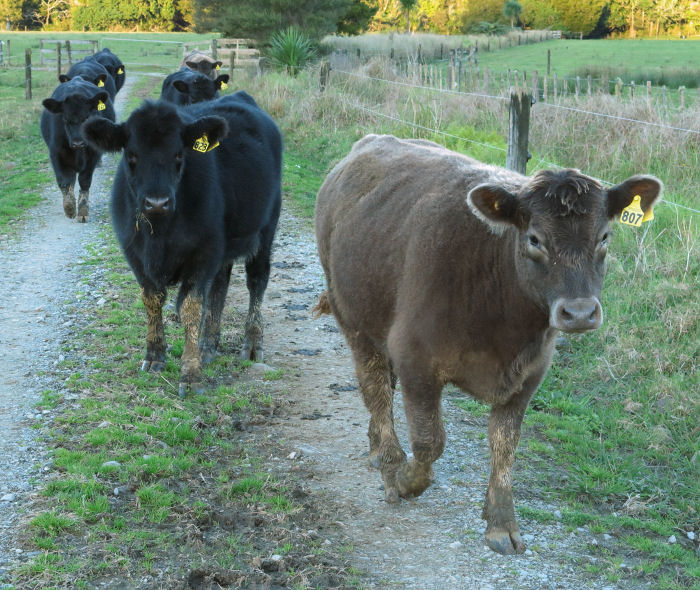 I didn't manage to capture their visible breaths in any of my photos but these heifers were like a lot of little steam engines, huffing their way along the lanes.  The air was very cold as the afternoon faded to early evening.

There were light frosts on both Wednesday and Thursday mornings. 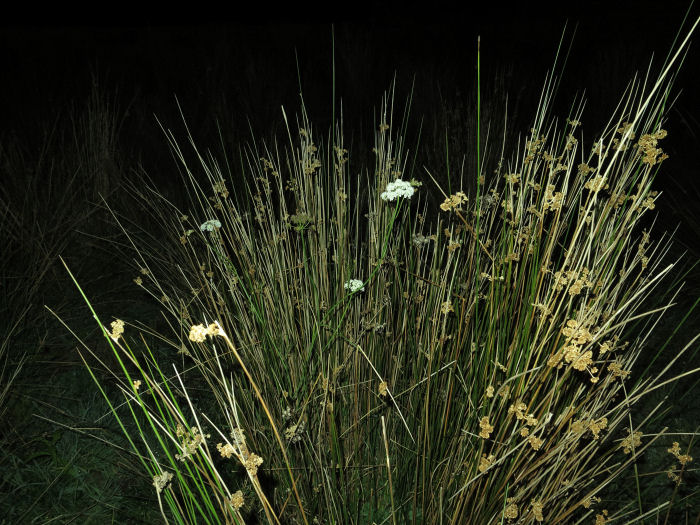 It wasn't quite as dark as this photo suggests when I noticed the white flower of this Parsley Dropwort plant in the Bush Flat paddock.  I was walking home just after 5.30pm as the light was getting quite dim and wasn't quite sure what I'd seen, since this plant isn't usually present at this time of year.  It's a very strange season. 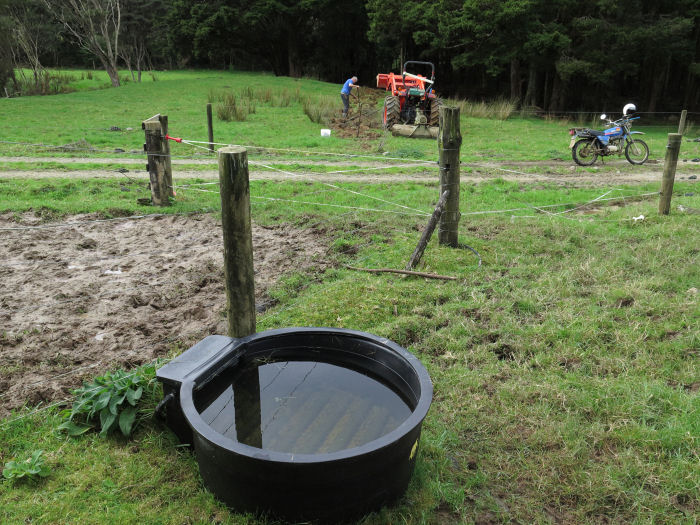 While I was writing a magazine column yesterday, Stephan was out here digging a trench for a new trough we've been intending to install in the eastern end of the Swamp East paddock.  It's another bit of water reticulation necessitated by the stream fencing project.  At present the cattle have to go along to the trough at the other end, over the boggy culverts we've still not managed to fix properly.

The first job was to find the main water line, which we did by referring to the website, the source of all stored memories!  I was pretty sure I must have recorded the installation of this trough in the foreground and found it by searching "Pines trough installed" and looked at the earliest page that search revealed: January 2006.  That shows where we dug a trench across the track to find the waterline for the installation of a saddle to take a 20mm line off for this trough.  We needed to find it again today and take a t-joint off the 20mm pipe to feed across the stream in the other direction. 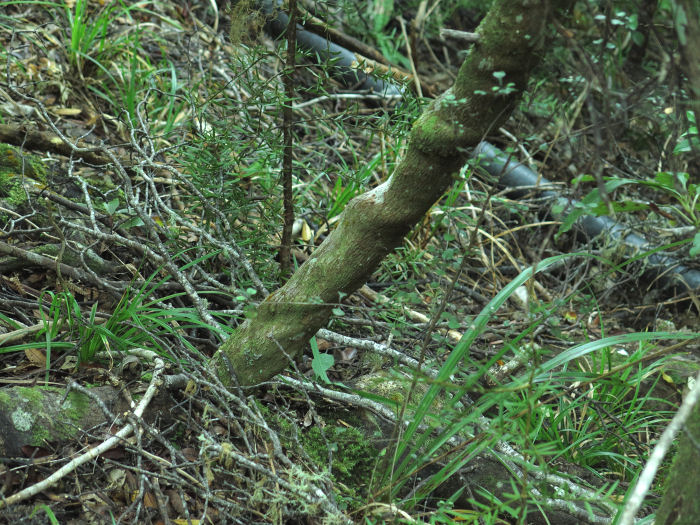 But before that could all be made to run and checked for leaks, the water intake needed fixing again, since no water has been coming down the pipe since last week.

Stephan, whose knee is miraculously improved now that he's not waiting around for ACC to fix it, decided he would like to have a go at going up to the water source.  I thought we should both go.

This Soft Mingimingi got its top chopped off because it has been annoyingly falling across the track for a while and when Stephan was cutting it I noticed its spiralled appearance; I suspect it was once restricted by a Muehlenbeckia vine, like the one I found in the Big Back paddock a while ago. 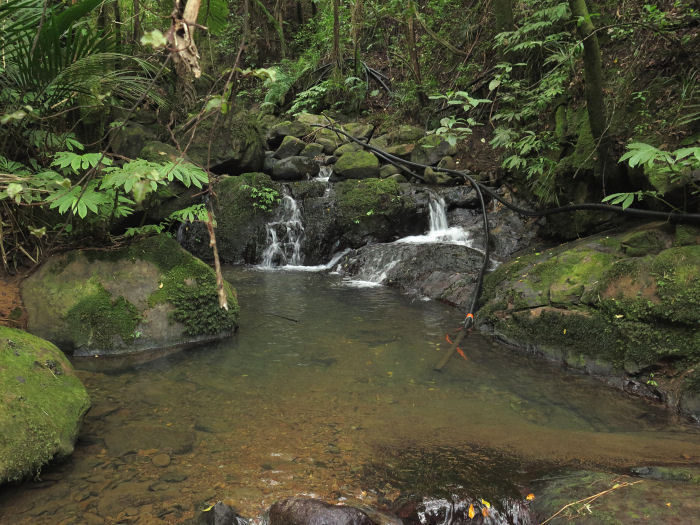 The water line was in an interesting state.  At least there were some pipes still there. That bit with the orange strap still attached was formerly connected to the big filter but was now buckled back where the pipe goes through a gap between some big boulders.  When I climbed up the stream bed to see what was up there, nothing remained; no filter, no stake hammered into the rock, nothing.

Stephan and I worked for a while, figuring out what to do to get the water running again.  He cut the pipe where it was buckled and fitted another piece with a fitting on it and I found a little pool from which to take the water, cleared any small stones so they didn't go down the line and then we found a way to feed the pipe into that pool between some big, seemingly immovable boulders, to which we then tied the pipe and the next joint with a bit of rope.  I placed a few rocks to hopefully reduce the chance passing of any eels finding the pipe and we set off down the hill again.

We'll have to come back up with some sort of filter for the end of the pipe. 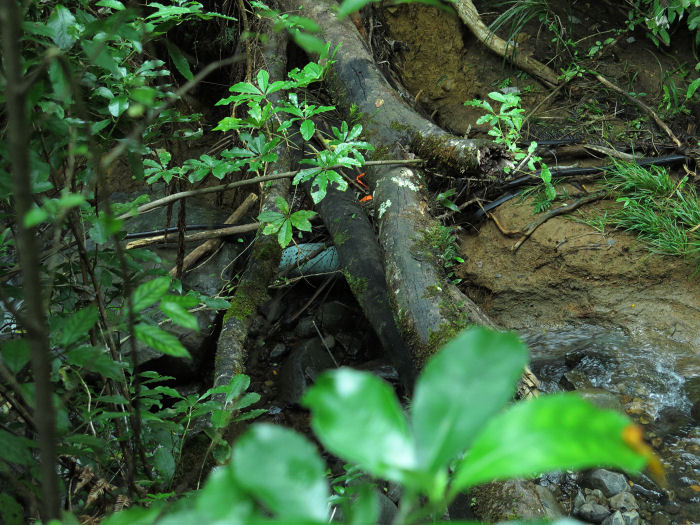 As we clambered down beside the waterfall, Stephan said that he could see orange tape down in the stream bed.  There's still a fair bit of big slip debris here, over which we now walk and there, entangled in the remains of one of the big trees that went down in the slip, was the filter. 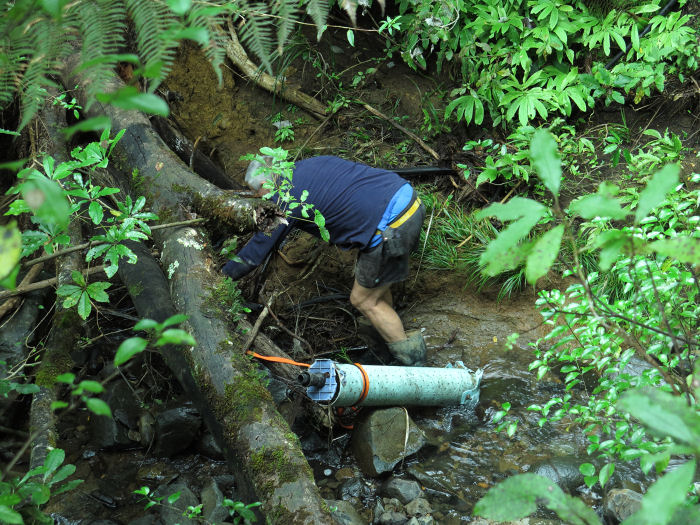 Stephan picked his way carefully down into the stream (I didn't think to take a wider view to show how far below me he was but it was about 10m/30ft down from the track) and found the filter was still tied to the metal stake.  We began to realise that the water that flowed through here must have been as high as, or even bigger this last time than it was in March. 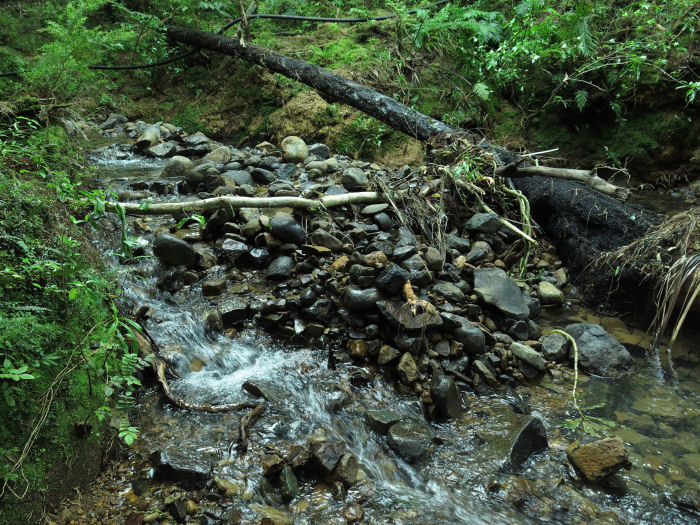 This great bank of rocks would tend to support that idea.  This pile is a couple of feet high where it was not before.  No wonder rocks keep piling up in the Spring crossing and it looks like they'll be coming down for a long time yet.

Before the slip and these recent large flood events, this stream bed was fairly stable.  There'd be some high water which moved things around a little, brought a bit of debris down the stream from time to time, but since the slip there are a lot of extra rocks making their way down.  In high water their movement is often audible, clunking along over the other rocks in the stream.  It's a fantastic noise.