Home again after arriving last night at 9pm in the rain.  We drove north from Auckland in appalling weather, all the way!  My mother, Jill, is currently the Anglican Vicar (Priest-in-Charge is her proper title, I think) of the Parish of Whangarei, so we have a very convenient resting place half-way home, where we joined her for dinner and conversation.

This morning's first job was a whole-farm walk, to check on the welfare of all the animals.  Nick had done a great job, keeping mobs of cattle moving to new paddocks as necessary, so they were all looking really good.

As is usual for me, after a trip south, I spent the next couple of weeks suffering the effects of some influenza-like virus I'd caught from some sick person along the way.  Dismal.  Every time this happens I swear I'll never leave home again!

From my window this morning, I could see the little heifers walking around on this side of one of the trees we fenced off a few weeks ago.  A check with the binoculars showed that one of the new fence posts was broken and that there was wire all over the place!  Stephan went over to have a look, returning to report that both posts were broken, presumably as a result of the fence having been run through by one or more of the calves.  It seems extraordinary that they should have been able to apply so much pressure to the two electrified fence wires, to cause the posts to break, and for none of them to have any apparent injury.  They've only been in the paddock since Saturday and I've heard no commotion.

Stephan took the tractor over, since there were a couple of posts to thump in, and repaired the fence.  The onlookers ran around and watched from different vantage points throughout the job.

From my window this afternoon, I could see some suspicious activity in the mob of young bulls and pregnant R3 heifers, so went for a gentle stroll to investigate.  416, the one white-faced heifer in the mob, was attempting to mount one of the bulls and looked a little inclined to allow some reciprocation.  Unless something has happened to her pregnancy, or is happening and causing a hormonal upset, she ought not to be interested in such activity at the moment.  Her early udder development is on a par with that of the other heifers, so I'll just have to watch and see what happens and hope that nothing is amiss.

While I was out, I went to have a close look at the little heifers, but they really do all appear to be completely fine, with no wire cuts or any sign of tangles with fencing wire. 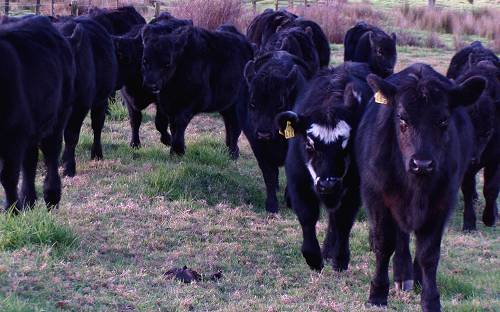 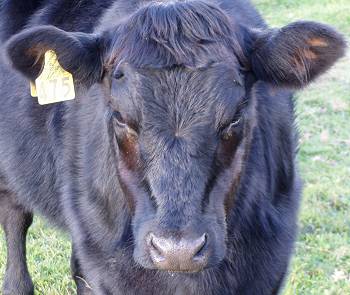 This is 475, daughter of the grey cow #16, who had a close call when she was only a few days old, when there was a serious problem with her mother's milk-supply.

475, has looked fantastic since she recovered from that early trouble.  Her conformation (bodily structure) is very nice and she has a lovely nature, probably partly influenced by that early handling.  I also suspect that there's quite a strong inherited influence on her temperament, since her five-year-old paternal half-sister, #359, is quiet enough to stroke in the paddock. 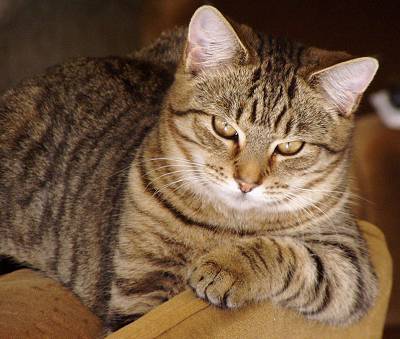 Stephan disappeared for several hours today and eventually I went to find him, discovering him nearing the end of a creative process.

I've been suggesting for some time that we could do with some outside furniture, so he found a pattern in a magazine and built a chair!  It has wide arm rests for the placement of refreshments and a good book.

The young pregnant heifers are beginning to make their condition obvious, with a sudden development of their udder areas.  They're all looking really fantastic, with good levels of body condition, without being fat.

This job gets more and more interesting every year!  To see these animals, which were not much more than calves this time last year, now about to become mothers themselves, is really exciting.  There are risks in breeding young heifers, but these are well-grown and are carrying calves sired by low-birthweight or easy-calving bulls.  Reducing the generation gap to two years instead of the usual three, accelerates genetic gain in a herd considerably. 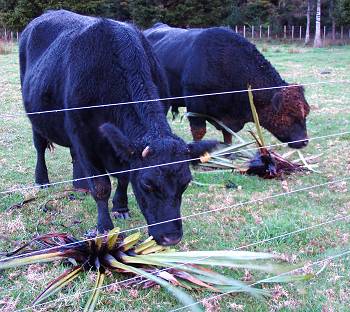 Walking back from checking some of the cows this afternoon, I discovered a couple of bits of lily plants which had fallen from a Puriri tree in the paddock next to Quadrille and 356.  The cattle find them delicious and soon clean them up when they fall to the ground, so I dragged the plants over to the fence and heaved them over.

The steer's wound is almost (how many times have I written this?) healed over, but there still remains a finger-tip sized patch over which the skin hasn't yet grown.  It appears to be making progress again at present, so perhaps the dampness of the atmosphere is facilitating the process.